In this devblog we'll talk about how tank damage has changed in UW 0.6.

Since posting our last update, much progress has been made. The first big milestone is that the 0.6 demo is now stable enough for us to play it start to finish without any obvious game breaking bugs. This does not mean that we’re done working on it though. We’re hard at work polishing the demo, tweaking the balancing, adding some additional content and fixing small bugs as we find them.

The second milestone is that we decided on the launch date for the Kickstarter campaign. We’re going to reveal the exact date tomorrow, together with our brand new trailer. Our narrative designer PMar did an outstanding job on the trailer and we’re looking forward to sharing it with you.

Today’s post will cover changes to how tanks work in the new 0.6 demo. If you read the previous article, which covered the unit health system changes, you’re going to notice some similarities.

Not unlike the unit health system, the old tank damage system was about as simple as such a system could have been. Tanks were considered a single unit with a health value attached to them. Every attack would reduce the health by some amount and once the health reached 0, the tank would explode and all units inside would die with it.

In order to keep up with the advancements in other parts of the game, the tank system was rewritten entirely from scratch.

The first major change is that tanks are no longer a single unit with a single HP value. Damage is now split up between parts. Hull, engine, left and right track and every turret can now be damaged individually. The screenshot below shows the tank management UI where you can see the state of your squad’s tanks. 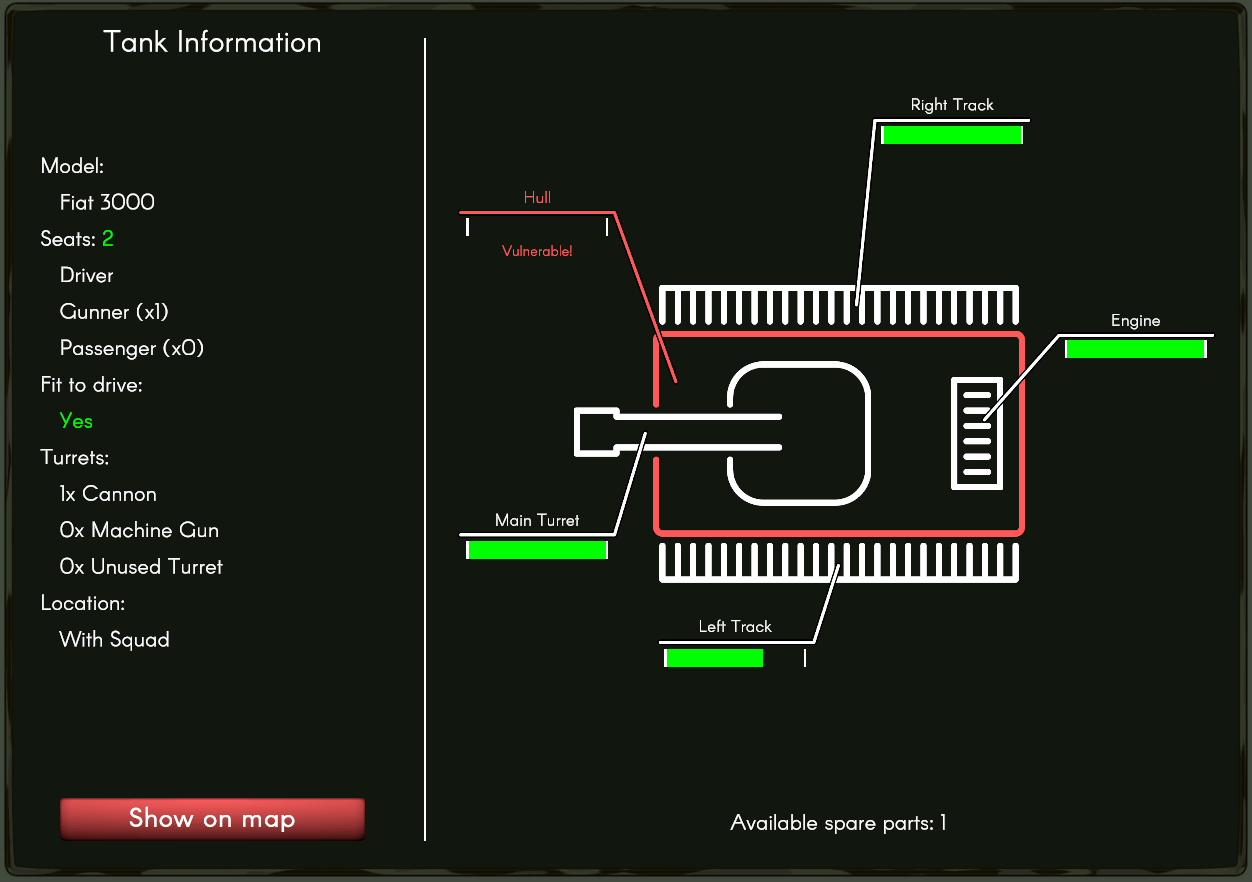 As you can see, the hull’s health has been completely depleted and it’s now marked as “vulnerable”. The way the damage system works is that destroying different parts of a tank causes different problems. 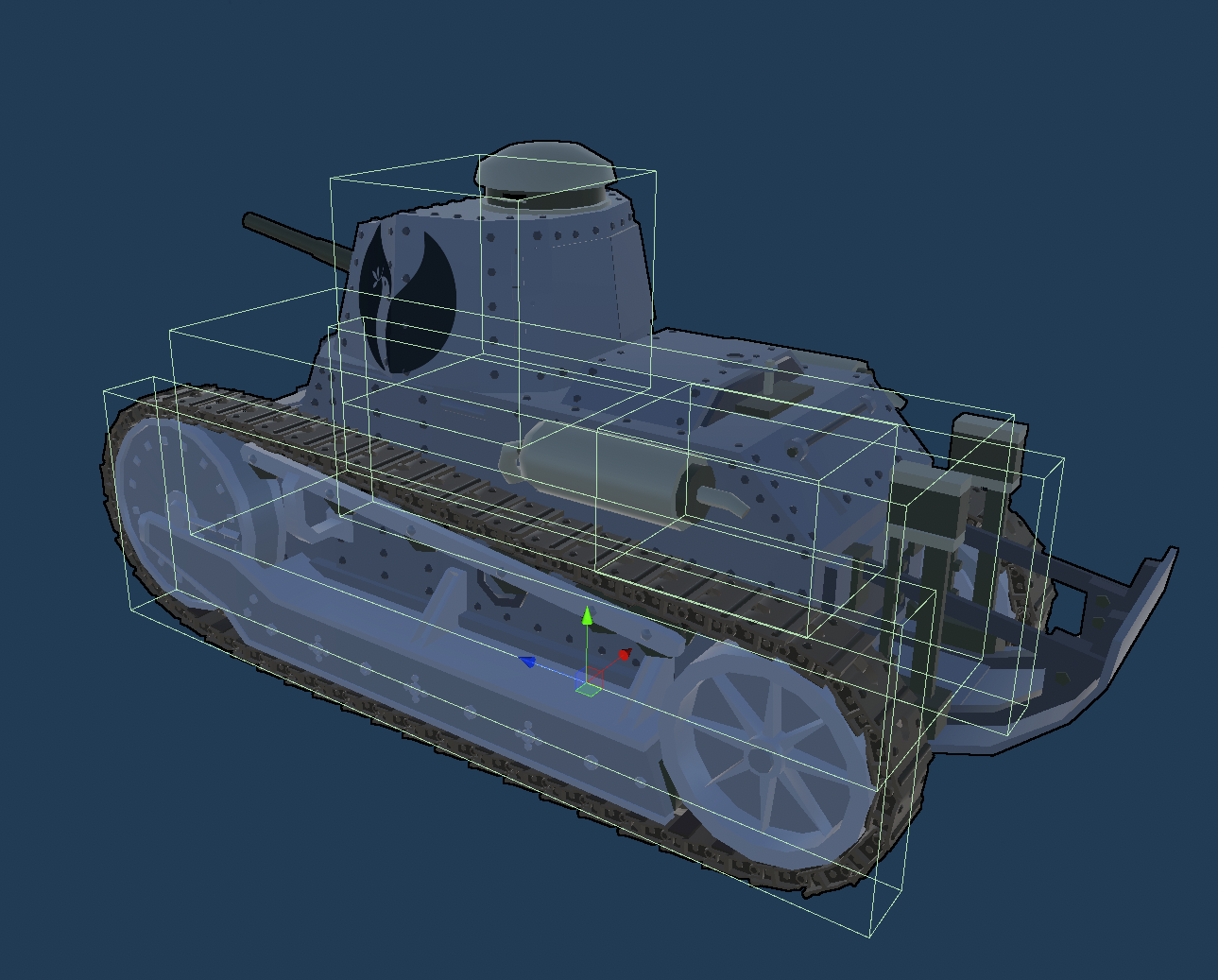 Destroying the hull means that the crew of the tank will no longer be protected from incoming fire. Even non-armor piercing ammunition is going to damage the crew

Destroying a turret puts it out of service. You will no longer be able to control it and fire using that particular turret.

Destroying the engine fully immobilizes the tank. The tank will come to a complete halt and you’ll see black smoke coming out of the engine bay. Turrets remain operational.

Destroying a track causes it to lock up. The tank will no longer be drivable and only spin slowly in one direction or the other, depending on which track has been destroyed.

Tanks can be damaged by explosives, tank shells and armor piercing ammunition. If an enemy tank is no longer able to defend itself properly, the crew will disembark and fight on foot

None of the parts mentioned above cause the tank to simply explode when destroyed and the tank doesn’t explode when all of them are destroyed either. Instead, immobile tanks are abandoned.

When you return to the world map, you’ll see that the nodes on which tanks were abandoned are marked as such. Broken tanks do not despawn. If you have a unit of the mechanic class and the necessary tools, you can return to such a node, go camp, repair and retrieve the tank.

This system is still in an early stage of development and 0.6 won’t use it to its fullest extent quite yet.

Tanks can be repaired during camping. To do so you need a unit with the mechanic skill, disposable spare parts and maintenance tools, which can be constructed like tents and campfires. 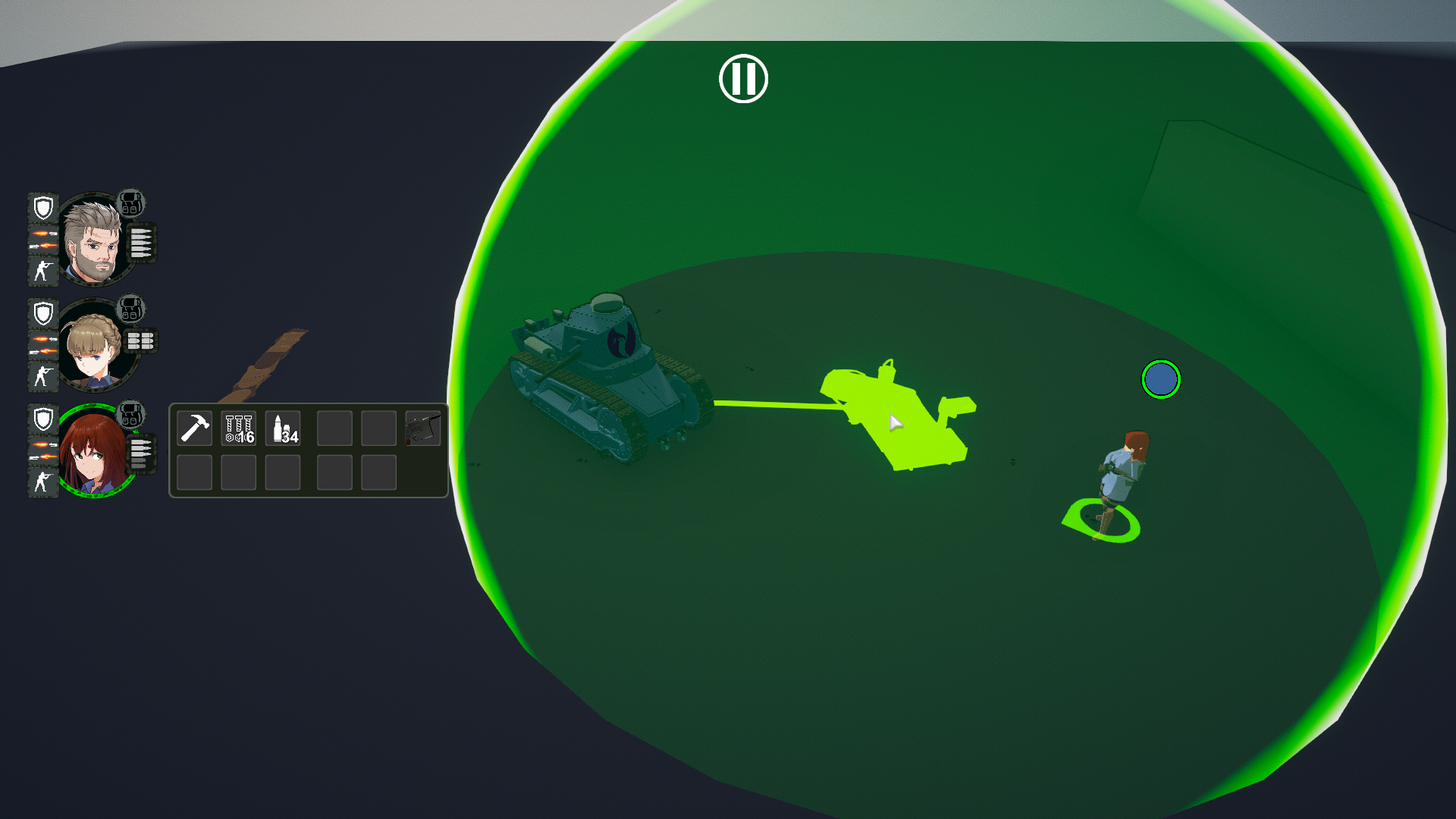 In the above screenshot you can see an example of placing the maintenance tools. The tank needs to be within a certain distance of the tools in order to be repaired. (The maintenance tools can also be used by non-mechanics to repair their weapons.)

As mentioned earlier, abandoning and retrieving tanks isn’t quite ready for 0.6 yet. Being able to take every tank you defeated with you would cause major balancing issues. We also need to add a system that allows you to choose which tank to use during combat.

Your tank ammo (and maybe fuel) will get limited as tanks are too powerful right now. The enemy AI also needs to get better at dealing with your tanks. Their current behavior is made to deal with infantry. They search cover and stay put, which puts your tank at a massive advantage.

Look forward to tomorrow’s devblog and the reveal of our Kickstarter trailer.