As I had mentioned in my last news post, this update is quite large. Mostly all of the time was devoted to putting out the NPC system and polishing it up a bit. However, I did have time to implement a few other key gameplay features such as suspects (and ways of identifying them).

For now, there's only two models of NPCs, a male and female. I went through and animated out all of their sprite sheets to make them fully functional. I even threw in a few extra animations I may or may not use in the future. Eventually there will be much more then just two models, but this gave me enough room to implement them fully in the game. Below is an animation of them walking around the police station.

With NPCs existing in the game all set to go with full animations, I wanted to take the extra effort to complete their core functionality. Instead of just being placeholders like they might've been in a shorter update, I had the spare time to write some AI for them. Currently, there are three types of NPCs found in the city: civilians, police, and mobsters. All three have different behavior patterns. For example, a civilian will never pull a gun on you, but the entire police force will hunt you down if you shoot an innocent. Likewise, crossing over mob turf uninvited will put you directly at the top of their hit list. Here's a little animation of an NPC responding to a bullet being fired in the building by drawing his gun.

In addition to all of the NPC work this update, I also had time to tie in suspects to the game. Being a core element alongside clues, this was also a major step. Currently, you can question NPCs about possible suspects. Any information will be added to your Notebook for later viewing. Of course, they're not always in the mood to talk about possible suspects, so you'll also hear some smalltalk from time to time. Below is a screenshot of a woman suggesting a possible suspect to investigate. 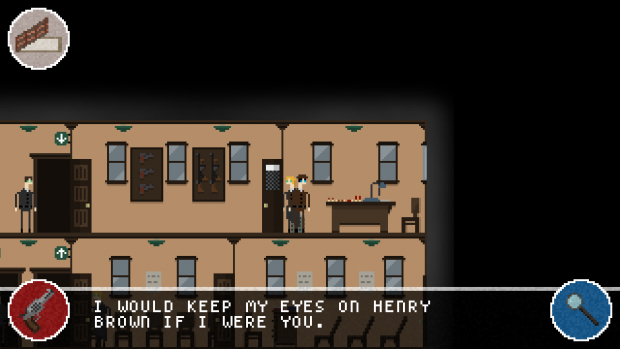 It's been a manic update for sure. Luckily, I was able to get quite a lot of progress done, especially in key game components. If only every update was this large, I'd have the game done in no time. Anyways, I'll continue with my nose to the grindstone and be sure to keep everyone posted in the future.