I got through a good mixture of both art and code this week. A lot of underlying systems have been updated, including bug fixes. Some of the code has been streamlined to better allow for the new features.

One of the first things I did was update a lot of the old levels. This included balancing the item system based on each location, thus providing more rewards for larger areas. I also accounted for money, lockpick, and clue drop rates to make sure everything felt "fair" while playing. Below is a screenshot of the player finding some money after investigating an object in the mechanic shop. 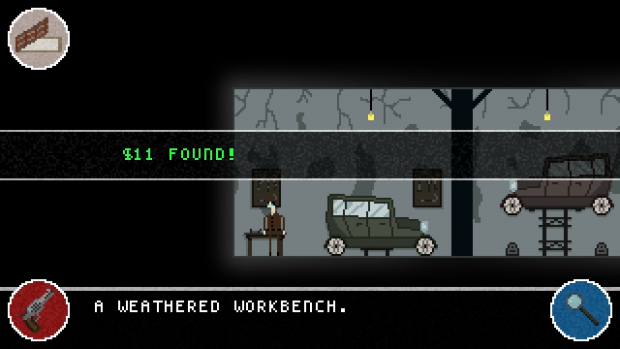 Transitioning from code to art, I implemented the full bullet system. Previously, the shooting animations were just placeholders. Now, bullet objects are created and interact with the environment as expected. Bullets will travel rapidly until hitting an object, be it a player, some sort of prop, or a wall. To go along with this, I fully implemented player death. Being hit by a bullet will result in the player dying, thus playing the animation of them falling over and ending the game. Here's a little animation of the player shooting, along with the new bullet that results from such.

Now, for the mainly art side of things, I completed the Department Store level. It's a very wide location with plenty to explore. Being so large, this gives the player more opportunities to find items - if they're willing to look.

I also took quite some time to work on the text animations. Easing in the sliding text came down to very miniscule numbers having tiny effects on each animation. Getting these numbers just right makes the text sliding much more interesting. It definitely feels more spicy then just throwing random text in place. Here's an animation of this in action.

All in all, some more solid progress this week. I'm hoping to work on a very major point of the game for my next update. Thus, news of it may or may not come out a bit later then usual. If things go well, then the next post will be an enormous step forward towards completion of this game. Hopefully I'll have some juicy material to talk about during the next update!