Today we have decided to show some very fresh screenshots from the game. Namely, how the game starts.

Today we have decided to show some very fresh screenshots from the game. Namely, how the game starts.

One of the main choices you, as a player, will have to make is to choose what country to play. Our aim is to give you a diversity in available technologies and play style. In time we aim to tell you the story of the tank from the perspective of countries that were the major influencers in the history of the tanks!

So let us have a look who these countries are, and what story will they tell us. 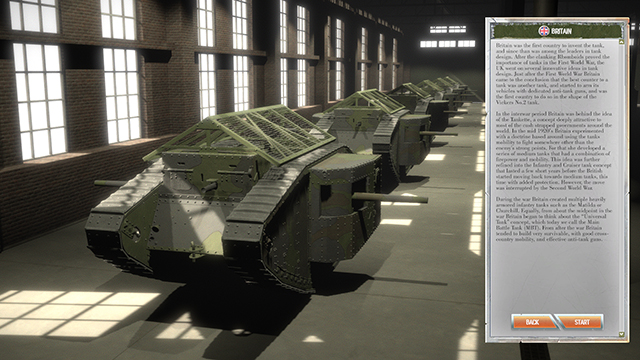 Britain was the first country to invent the tank, and was therefore among the leaders when it came to tank design. After the clanking Rhomboids proved the importance of tanks in the First World War, the UK went on to several innovative ideas in tank design. Just after the First World War Britain came to the conclusion that the best counter measure to a tank was another tank, and started to arm its vehicles with dedicated anti-tank guns, and was the first country to do so in the shape of the Vickers No.2 tank.

In the interwar period Britain was behind the idea of the Tankette, a concept deeply attractive to most of the cash strapped governments around the world. In the mid 1920’s Britain experimented with a doctrine based around using the tanks mobility to fight somewhere other than the enemy's strong points. For that Britain developed a series of medium tanks that had a combination of firepower and mobility. This idea was further refined into the Infantry and Cruiser tank concept that lasted a few short years before the British started moving back towards medium tanks, this time with added protection. However, the move was interrupted by the Second World War.

During the World War 2, Britain created multiple heavily armored infantry tanks such as the Matilda and Churchill. Equally, from around the midpoint in the war, Britain began to think about the “Universal Tank'' concept, which today we call the Main Battle Tank (MBT). After the war Britain tended to build very survivable and effective anti-tank guns with good cross-country mobility. 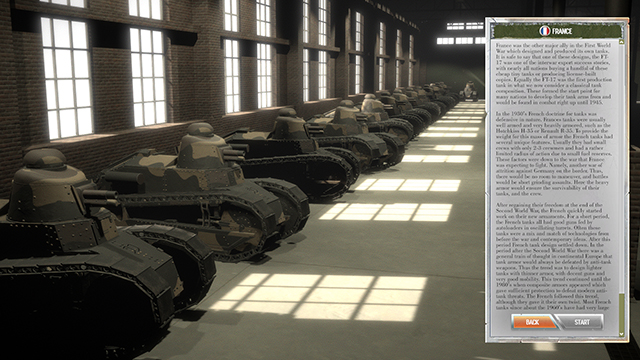 France was the other major ally in the First World War which designed and produced its own tanks. It is safe to say that one of these designs, the FT-17 was one of the interwar export success stories, with nearly all nations buying a handful of these cheap tiny tanks or producing license-built copies. Equally the FT-17 was the first production tank in what we now consider a classical tank composition. These formed the starting point for many nations to develop their tank arms from and would be found in combat right up until 1945.

Frances tanks were usually well armed and very heavily armored, such as the Hotchkiss H-35 or Renault R-35. To provide the weight for this mass of armor the French tanks had several unique features. Usually they had small crews with only 2-3 crewmen and had a rather limited radius of action due to small fuel reserves. These factors were down to the war that France was expecting to fight. Namely, another war of attrition against Germany on the border. Thus, there would be no room to maneuver, and battles would be short grinding assaults. Here the heavy armor would ensure the survivability of their tanks, and the crew.

In the period after the Second World War there was a general train of thought in continental Europe that tank armor would always be defeated by anti-tank weapons. Thus the trend was to design lighter tanks with thinner armor, with decent guns and very good mobility. 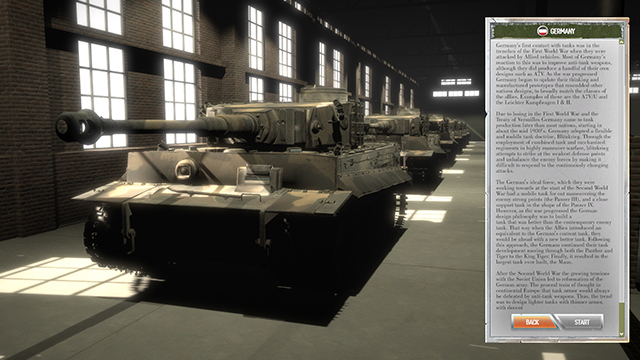 Germany's first contact with tanks was in the trenches of the First World War when they were attacked by Allied vehicles. Most of Germany’s reaction to this was to improve anti-tank weapons, although they did produce a handful of their own designs such as the A7V. As the war progressed, Germany began to update their thinking and manufactured prototypes that resembled other nations designs to broadly match the classes of the allies. Examples of these are the A7V/U and the Leichter Kampfwagen I & II.

Due to losing the First World War, and with the Treaty of Versailles, Germany came to tank production later than most nations, starting in the mid 1930’s. Germany adopted a flexible and mobile tank doctrine, Blitzkrieg. Through the employment of combined tank and mechanized regiments in highly maneuver warfare, blitzkrieg attempts to strike at the weakest defense points and unbalance the enemy forces by making it difficult to respond to the continuously changing attacks.

Following this doctrine, the Germans continued their tank development moving through both the Panther and Tiger to the King Tiger. Finally, it resulted in the largest tank ever built, the Maus. 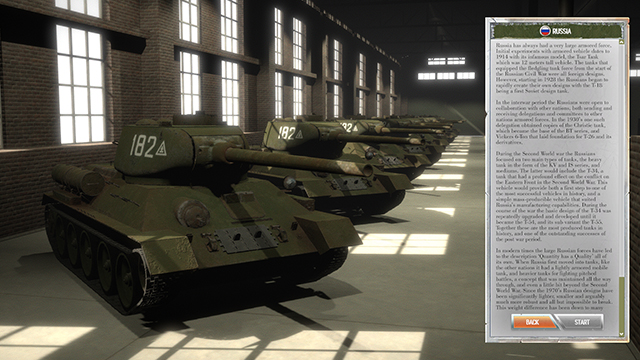 Russia has always had a very large armored force. Initial experiments with armored vehicles dates to 1914 with its infamous model, the Tsar Tank which was a 12 meters tall vehicle. The tanks that equipped the fledgling tank force from the start of the Russian Civil War were all foreign designs. However, starting in 1928 the Russians began to rapidly create their own designs with the T-18 being a first Soviet design tank.

In the interwar period the Russians were open to collaboration with other nations, both sending and receiving delegations and committees to other nations armed forces. In the 1930’s one such delegation obtained copies of the Christie tank, which became the base of the BT series, and Vickers 6-Ton that laid foundation for T-26 and its derivatives.

During the Second World war the Russians focused on two main types of tanks, the heavy tank in the form of the KV and IS series, and mediums. The latter would include the T-34, a tank that had a profound effect on the conflict on the Eastern Front in the Second World War. This vehicle would provide both a first step to one of the most successful vehicles in history, and a simple mass-producible vehicle that suited Russia’s manufacturing capabilities. 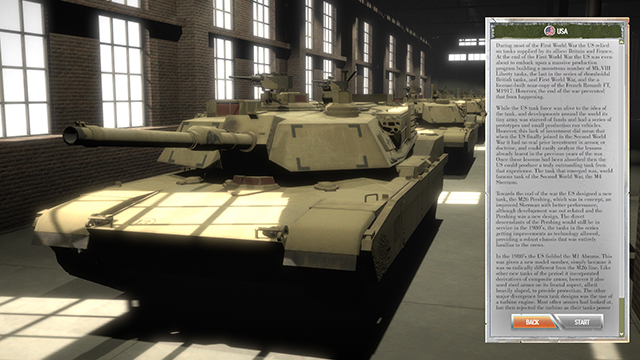 During most of the First World War the US relied on tanks supplied by its allies: Britain and France.

At the end of the First World War the US was even about to embark upon a massive production program building a monstrous number of Mk.VIII Liberty tanks, the last in the series of rhomboidal British tanks of the First World War, and a license-built near-copy of the French Renault FT, M1917. However, the end of the war prevented that from happening.

While the US tank force was alive to the idea of the tank and developments around the world, its tiny army was starved of funds and had a series of prototypes and small production run vehicles. However, this lack of investment did mean that when the US finally joined in on the Second World War it had no real prior investment in armor, or doctrine, and could easily analyze the lessons already learnt in the previous years of the war. Once these lessons had been absorbed, the US could produce a truly outstanding tank from that experience. The tank that emerged was the world famous tank of the Second World War, the M4 Sherman.

In the 1980’s the US fielded the M1 Abrams. Like other new tanks of the period it incorporated derivatives of composite armor, however it also used steel armor on its frontal aspect, albeit heavily sloped, to provide protection. The other major divergence from tank designs was the use of a turbine engine. Most other armies had looked at, but then rejected the turbine as their tanks power packs, simply due to the colossal logistics tail needed to support the engine. However, the US has the logistics might to bear that burden, and indeed is the world's leader in logistics, having a massive global support ability that outstrips any other nation in the world.

For more news about the game and our progress, please join our Discord channel: Discordapp.com!