Let's talk about gameplay and some other related mechanics.

From the start of the project I decided to make quite a simple system without complex control scheme.

Everything that have no reason to be controlled by player was thrown out, so no need to pick resources on the ground by special button or anything like that during combat.

At first I had an idea to add different equipment, godets and other things, but making additional active elements makes controls more complex and ruins flow for me, that’s why I decided to stop with standard abilities for player. My main focus was on moving and shooting, so everything was created on top of that two core elements.

Not the best use of player's abilities... But what a problem if you survived...

I started with basics: moving, firing and throw grenades ability.

After that I added med kits system, so player can heal himself during combat. I prefer this variant over regenerate health, because it gives player more choice during gameplay.

He need to think about this HP in long run, but med kits give him ability to make mistake and heal him up for that. But because meds amount is limited and can’t be restored easily he needs to be careful.

Because weapons have limited ammo, I needed something for player to attack if he runs out of ammo, so I added melee knife attack.

No bullets? You knife can do the thing

Also I have buttons to change weapons and activate things.

Most of the controls should already be well known to players. So I have no need in big tutorial to teach player with basics. 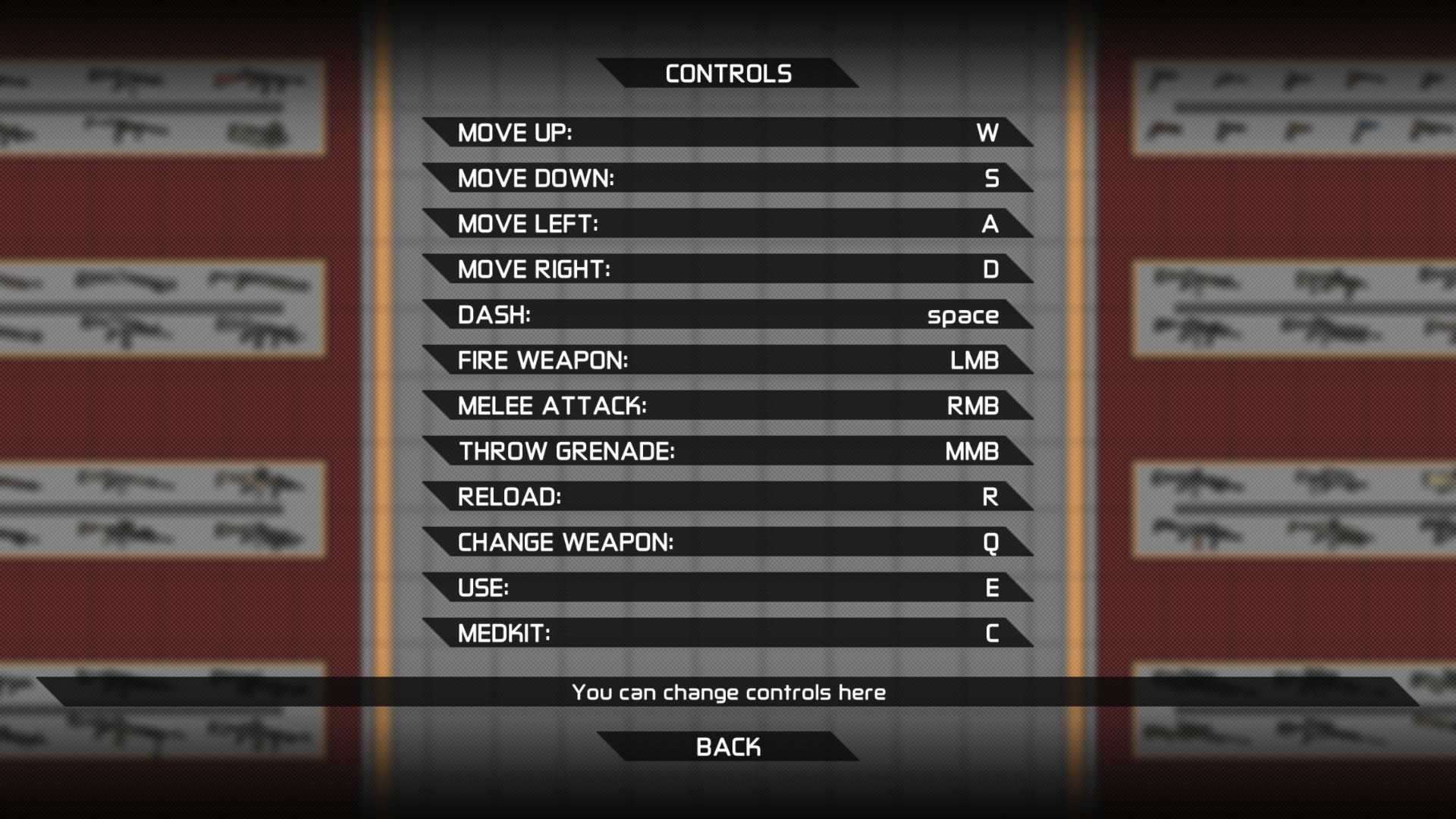 But after playtesting it was clear that player need some ability to avoid incoming fire if needed like performing a barrel roll. So I added dash mechanic to the game. When player is in dash state he is immune to enemy fire except explosives.

Dash ability has small cool down and it’s not limited to stamina or other limiters. But this move cancel weapon reloads and also needed to be mastered so it used to player's advantage.

Also player is able to perform some additional moves, like shooting grenades to detonate them early or perform a critical shot when the crosshair is precisely on the enemy to give additional damage.

Critical shot element is the main reason to abandon gamepad controls, because I wanted to make shooting mechanic with standard FPS feel when player can make headshot. This thing is very important to eliminate enemies fast and efficient.

Critical shot working the same as a headshot in FPS shooter

And finally the main idea of player's abilities is that everything should be available to the player from the beginning. I am not making grind heavy RPG here, so I have no need to hide abilities under level lock or something like that. All core abilities are ready to use by player from the first shootout. You don’t need to level up for ability to dash.

All these things affected a HUD too, overall your character has HUD like this: 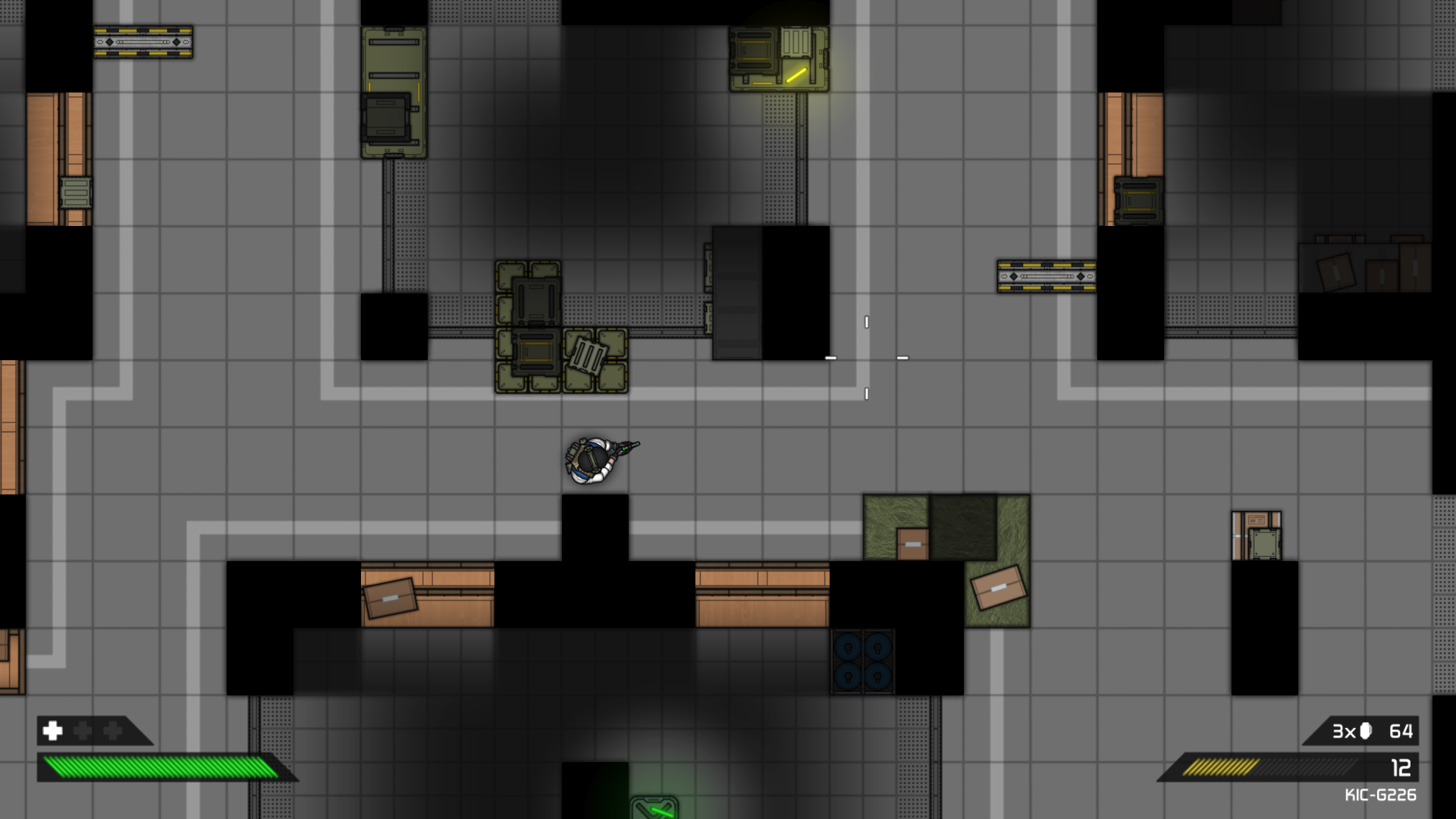 In the left bottom corner we see:
- Current HP
Simple and easy to read. Changes color when player in critical condition.

- Amount of med kits
Simple too, but do its job. You can only store 3 at a time.

In the right bottom corner we can find:
- Current weapon name
I wanted to make icon for a weapon, but couldn’t think of nice implementing this without additional screen space usage just for this element. Also player have only 2 weapons at a time, so I decided that he is able to memorize what he has.

- Current ammo count
Really, there was no real reason to make bullet count with visual counter, but I really wanted this, so it’s here =)

- Overall ammo count
Just represent ammo that player has in his pocket.

As you can see all HUD is heavily inspired by old shooters. But I tried to make it practical and simple (can’t tell that it was the best way though).

All right, that’s all for today, see you in the next Notes!