Hi! We Have Finally Replaced Our Placeholder Character And Have Some Of Our World To Share With You! Take A Look!

We are back and this time we can start to show some of our games' environment and characters! :D

This post will show our new character model and most of its features. We also switched all the progress made with Chip onto the new model and re-targeted all the animations and made some changes on the Ledge Grab Inverse Kinematics hand placement.

We have started to assemble everything we have and hopefully soon, we will have a demo for you to try!

First off, the Character 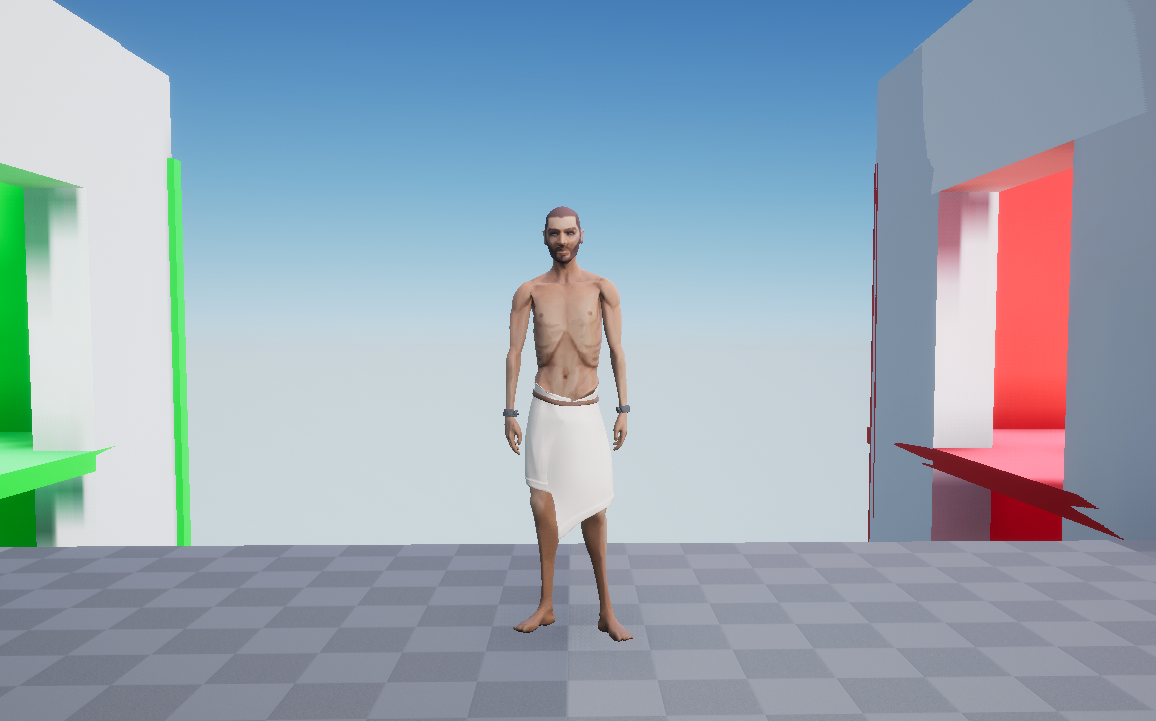 The Character was made by Tiago, one of our artists, using Blender and textured using Substance Painter. It has around 20000 verts, however, the biggest concentration is around the clothing, where we might later try some cloth simulation.

First thing we did was get all the animations we had for Chip applied to our new character.

We started with the aim offsets

Then the idle, walk, run blendspace and a simple jump. We might change the jump later as it doens't really match what we are trying to achieve, but it'll do as a placeholder for now.

Then the Ledge Grab. This took a little while as there are several animations, but in the end it looked like this.

We also changed the pillar drag

And the Pick up and Throw.

As you might have noticed, the hand placement on most of these animations isn't perfect, so we started to implement IK on most places we thought was necessary to fix this problem and make the character appear to actually grab stuff.

On the ledge we tried to make it look like the character is actually grabbing onto the ledge as much as we could but there are still a few artifacts (hand clipping/overlapping and weird hand rotation).

On the pickup we made the hand actually match the place where the object is.

This didn't work so well with the pillar drag because the hands ended up floating and requiring a rotation to the hand joint. As it is we have some Scene Components on the pillar so we have reference point on where to grab, we might use these components rotation to fix this.

We might also have to bring the character closer to the pillar, although, this will further limit visibility, something people have complained in User Tests.

In case you are wondering how we did it, we used a node in the animation blueprint called CCDIK as well as some animation Notify Events to activate and deactivate the IK at the right time. The only thing that is left to do then is to find the point in world space you want the hand to go to. You can check our previous post on Ledge Grab for more information.

And now... Some environment!

At the moment we are still working on the environment but we can start to give you an idea of what we are building. These will be the bigger "open world" exploration area and where your character can wonder around and get lost.

At the moment we are having a few frame issues as there are a lot of models and we still need to make different LODs (Levels Of Detail).

We put together a video to show the environment and a video with the character walking around this environment.

At the moment the environment feels very dead, so next post will probably be about AI and populating this environment with NPC characters.

Thank you for your time and see you next post!