We will show you some of the golden 3D models made for Curse of Life. These include quest props, curtains and even an epic temple door made with Blender

In this Dev Log, we will show you some of the golden models made for Curse of Life. These include quest props, curtains and even an epic temple door.

First of all, thanks for showing interest in our development logs and we're sorry for not uploading much this last week. We are cooking up a new trailer and promo art that I'm sure you will see soon.

Following the last few Dev Logs where we talked about research, we will follow the Egyptian motifs and we need models that represent that culture. Apart from the architecture and people, we need some gameplay items that we call "artifacts." These models are essentially "quest items" that the player will receive upon completion of a quest and some just purely visual.

In the first image, the two models to the left are very popular egyptian motifs: the Ankh and the Eye of Horus. To model these, I search for a top-view image of these motifs, import it to blender as an image and simply modelled them using that image. From the top-view, by extruding the base from a cylinder following the template, you can achieve the shape desired. Then, you can taper it in the ends and add more volume in the Z-axis. 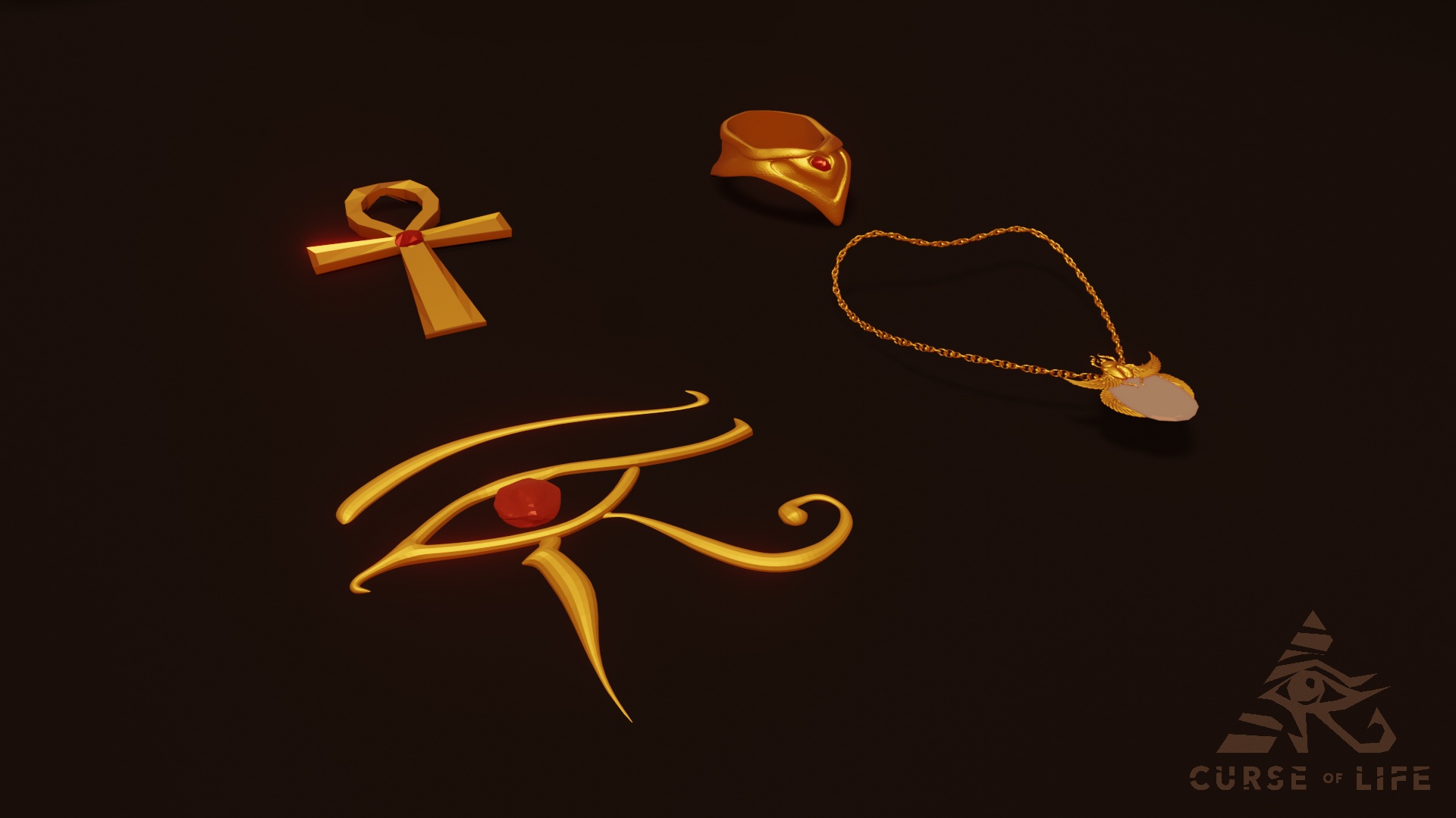 As you can see, the ruby is also a cohesive element throughout these models. The necklace was made out from a human mesh, where you select the neck area you want the necklace to be and extrude it out. After a couple bevels and subsurface modifiers you should have a nice necklace. The chain necklace is more complex, in which I created a chain with a precious stone hanging from it. To embellish it further, I used a model that comes up next! 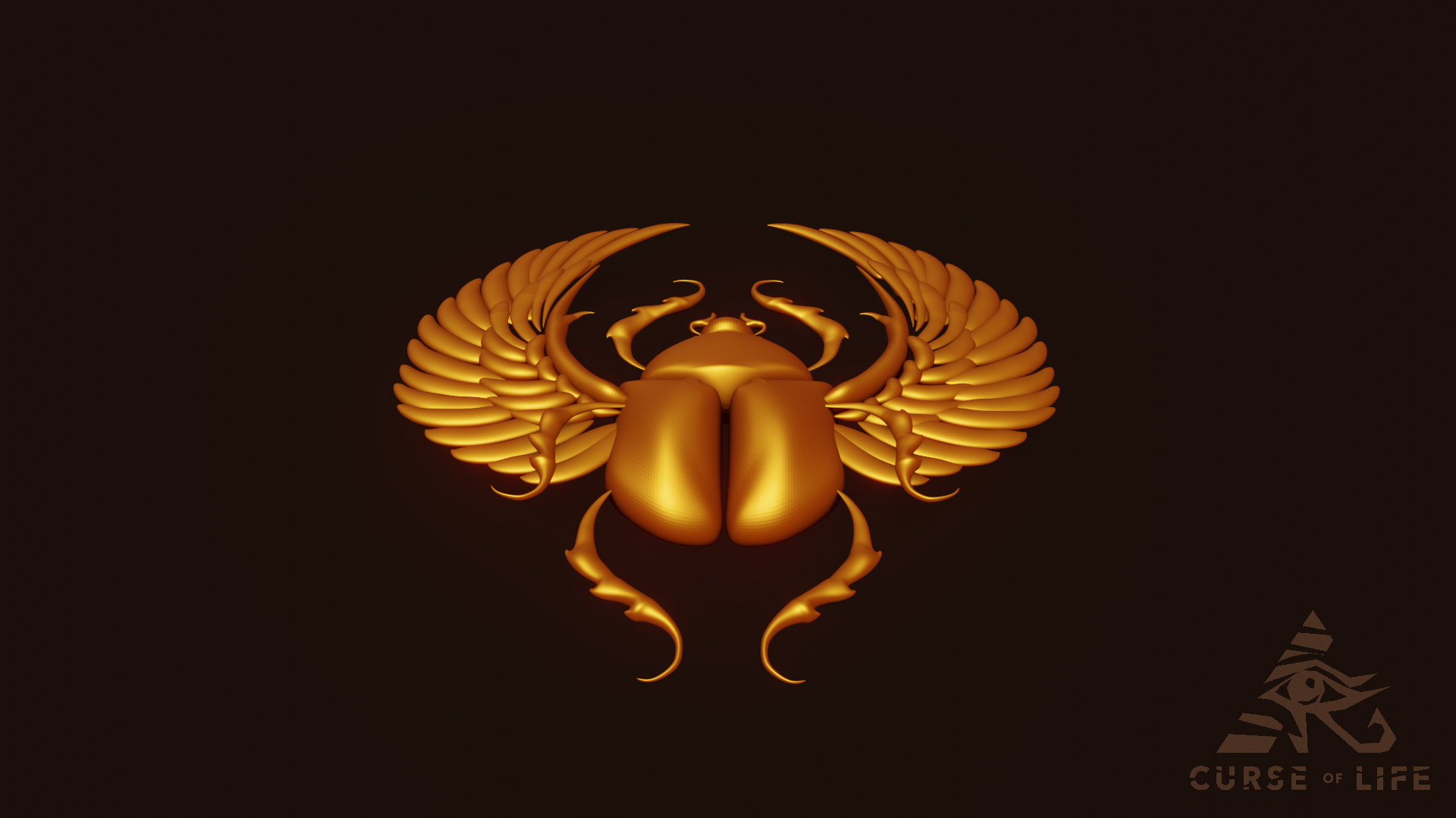 This is the most difficult model thus far as it's very intricate with many different elements.

To model the Winged Scarab, I used the same technique as the Eye of Horus where you start with a cylinder and extrude according to the reference. To simplify the model, I used the same model for every six legs, and one model to make up the wings. 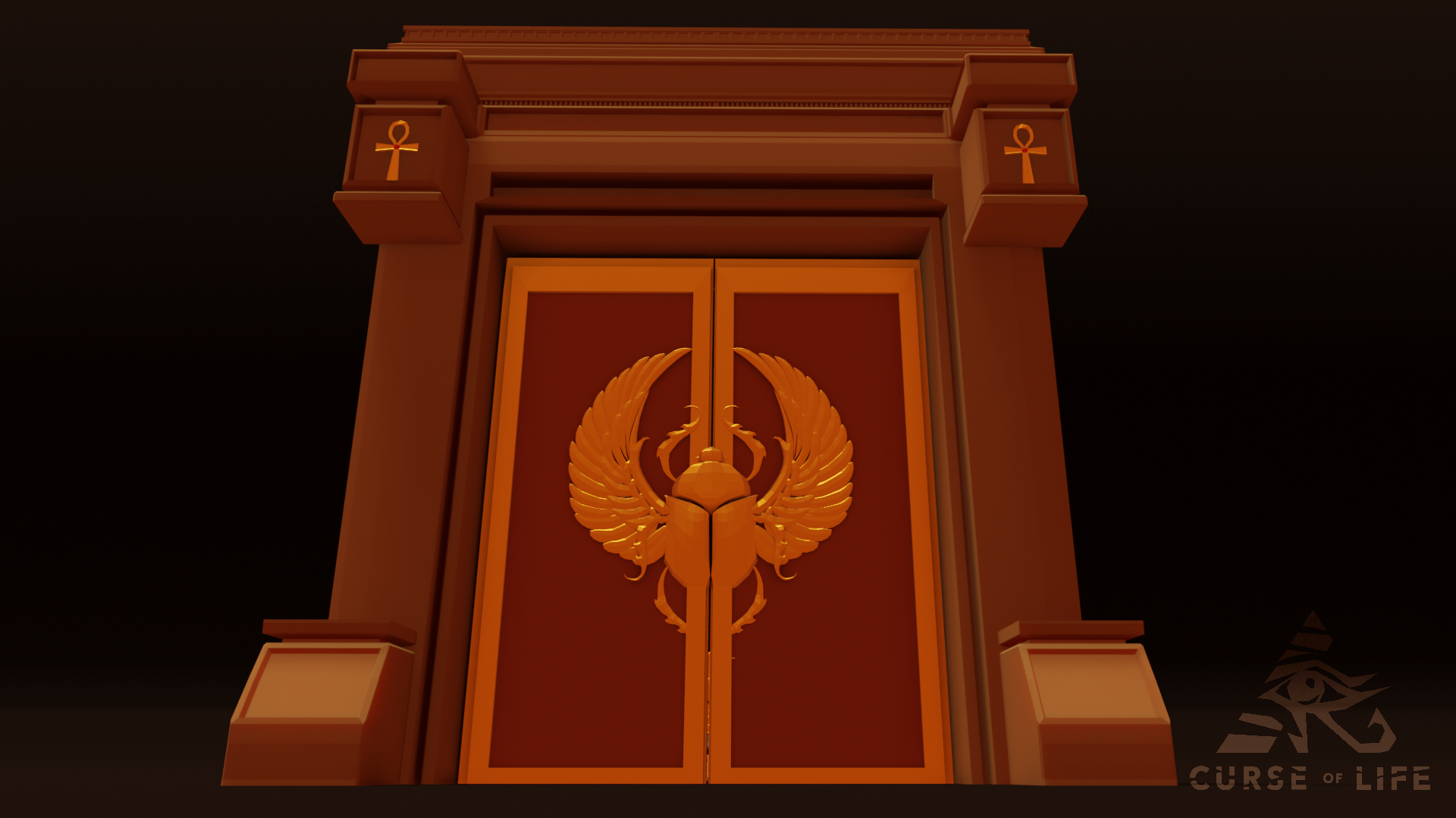 This is a fancier doorframe where I utilized the models showed beforehand as golden details. The door slides open to the left and right, so they need to be exported individually to be animated properly. 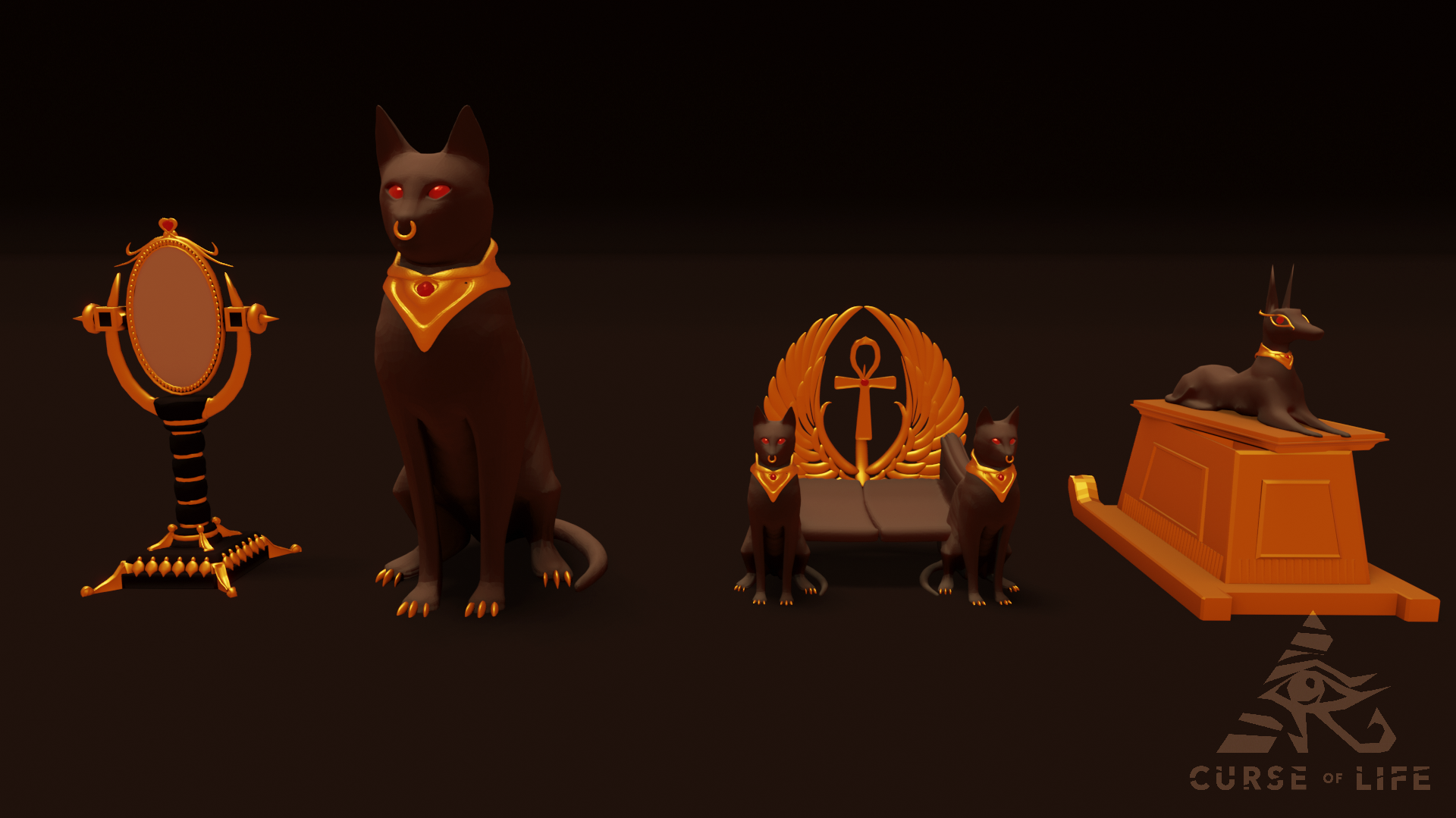 Here, I make use of older models to produce something greater. In the Cat statue I used the rubies and a necklace previously modelled. Then I used this statue to design the throne - here I also used the Ankh and wings from the scarab. Same with the chest and mirror where I used elements from the Eye of Horus and a pillar from before. 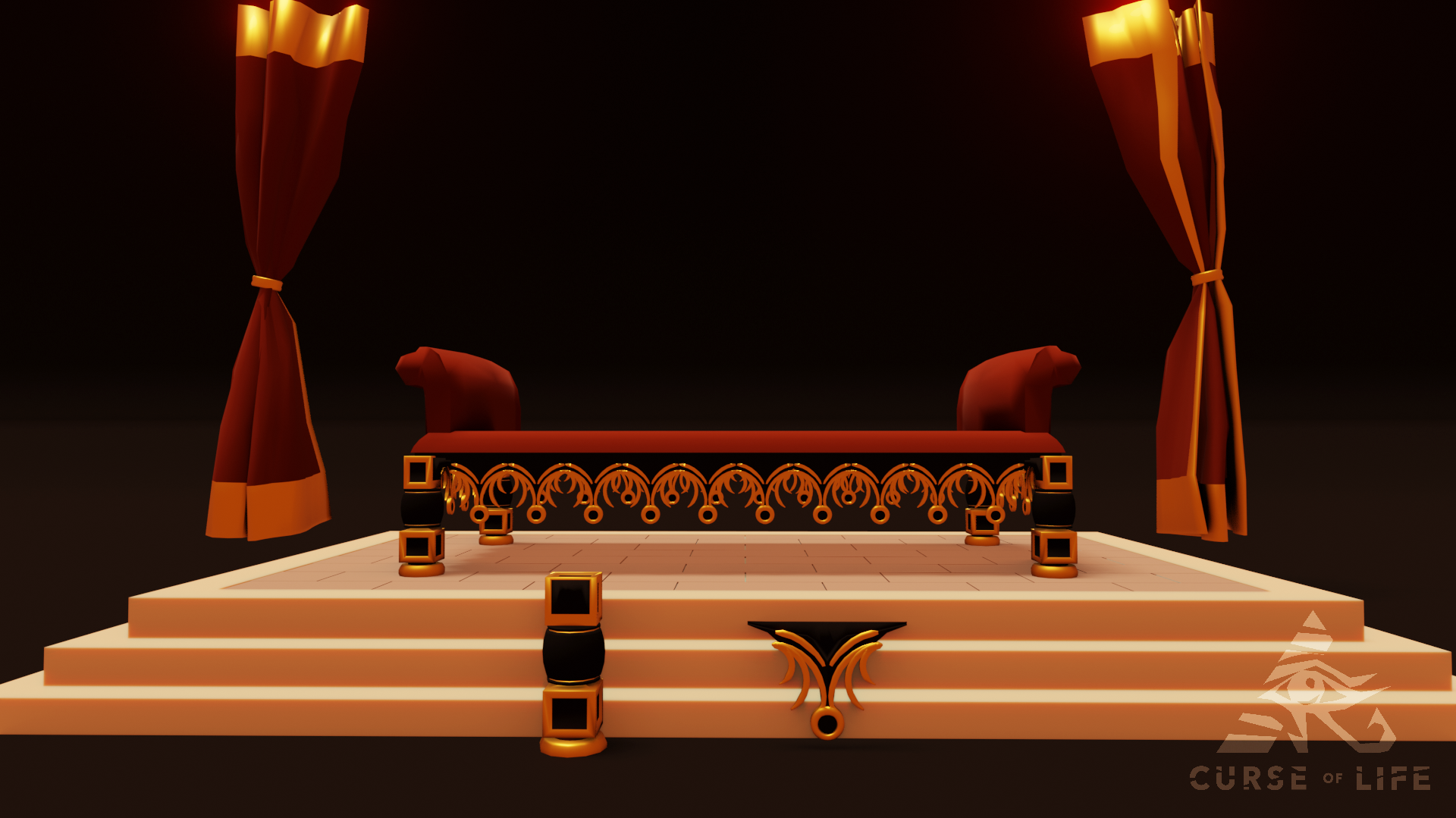 The final touch is a big royal bed. The design was made from these models in the front. Then I used the Array modifier and put the stands on the corners and the frieze below the edges. This frieze was made inside Blender using circles, and half circles, joining them and applying the Skin modifier.

Curtains are made from a cloth simulation that I will help you in an upcoming Dev Log ;) 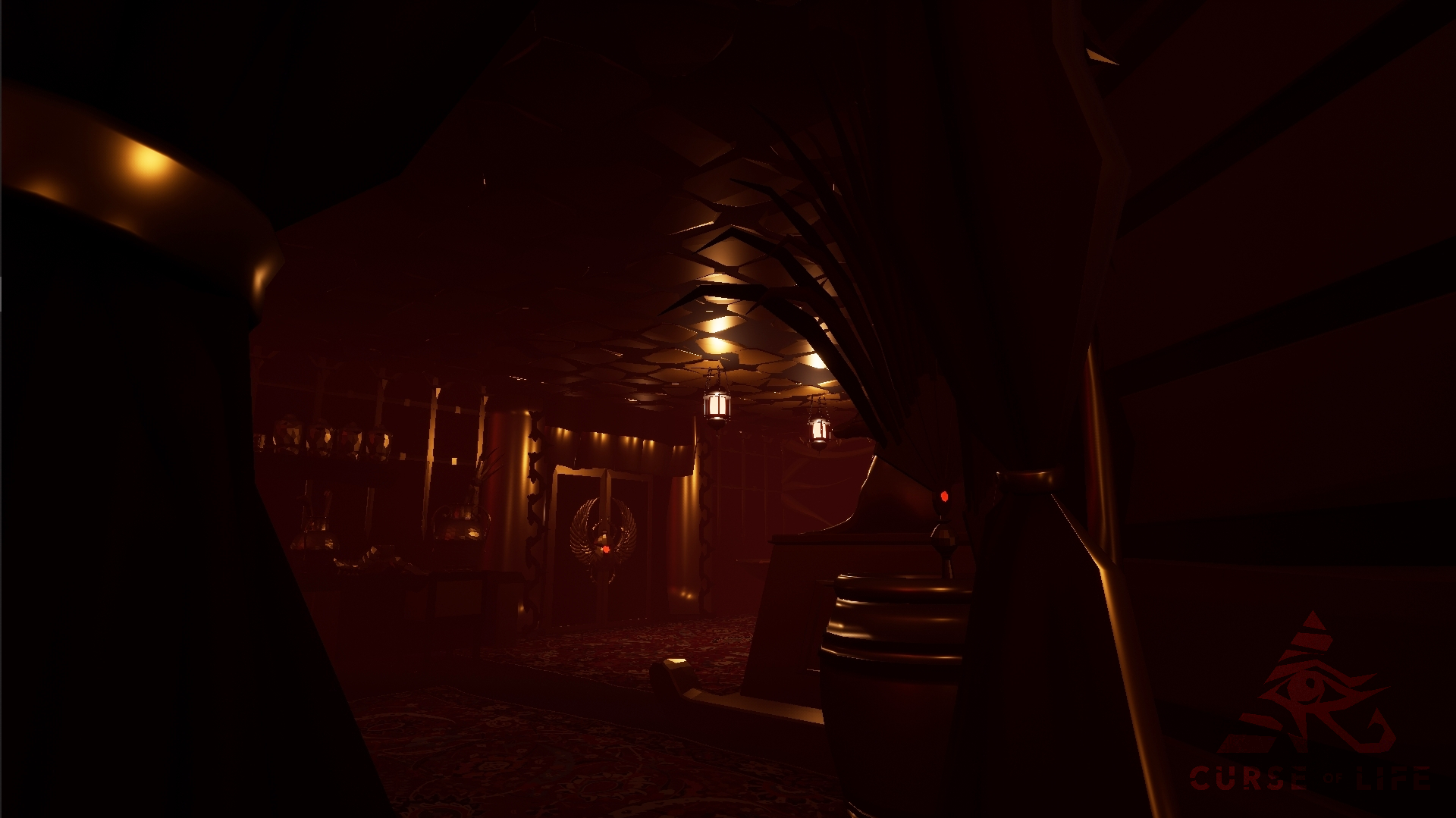 There you have it! A big part of this secret room inside Curse of Life is made up of GOLD. Exploration will surely be rewarded!