I revamped the pickpocketing mechanics as I promised. Also did some changes to the feats.

Hey, guys, sorry for the delayed update. I was out of country for a while on a vacation of sort. I'm back in the development chair now and here's what I've been doing. 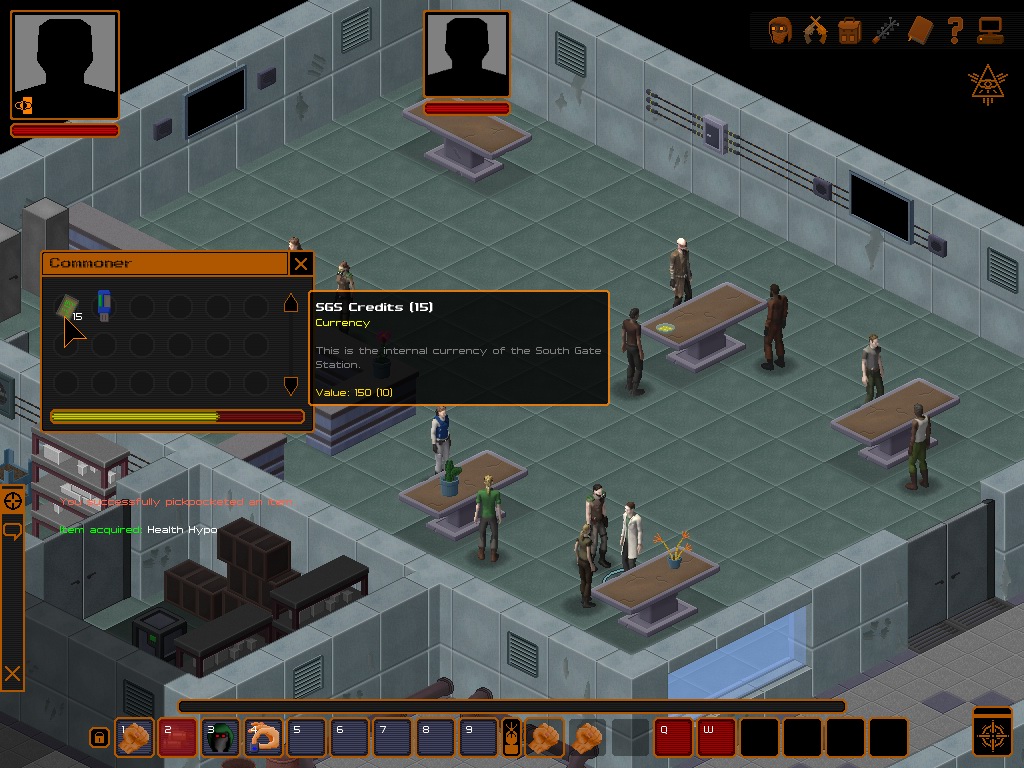 First of all I revamped the pickpocketing mechanics as I promised. The way it works now is that when you are stealing items from an NPC you are filling up their permanent "suspicion meter". If you fill up this meter to the max you will be detected and the combat will ensue. The game will indicate how much stealing a certain item will raise the suspicion meter.

The rate at which you fill this meter will depend on the ratio between your pickpocketing skill and the victim's detection. Since the detection scales off of character's level and perception, this basically means that you'll have to continue investing points in the pickpocketing skill (and ideally dexterity as well) in order to be able to steal (or steal more) from progressively higher level NPCs. Also, some items are harder to steal than others (e.g. heavy weapons and armors in comparison to smaller stuff like ammo and hypos).
The way this system is set up it means that, unlike lockpicking and hacking, the outcome is not binary. Depending on your skill-to-detection ration and the difficulty modifier of the item, you may be able to steal zero, one or more items from a given target. So investing more skill into pickpocketing will always be useful. Because there's no dice involved in the calculations, this will also eliminate the need for save scumming.

Pickpocketing does not require stealth, unless of course you're trying to steal from a hostile NPC.

The other major change I made is reducing the frequency of acquiring feats from one every level to one every two levels. The reason for this is that when I originally decided that you should get a feat every level I was planning on having the max character level set to 20, which would put you at 22 feats (+ some story extras), and since the total number of feats will be around a hundred having 22/100 feats seemed about right. It would mean you wouldn't be able to get every feat in the game you wanted/needed in one playthrough and the number of feats per character to the total number of feats ratio seemed like it would allow for a variety of different builds.

However, since I've increased the leveling rate a bit and decided to eventually change the max character level to 30, that would put the character at the max level up to 32+ feats. Now this is no longer a comfortable ratio, especially considering there might be expansion packs and the like that could raise the max character level. You'd be practically able to take every third feat in the game.

So now you get two feats at the start like before and one more feat each even level, which will put you at 17 leveling feats which is much closer to what I originally intended. I've also went back and buffed/reworked existing feats that were somewhat lackluster in order to make them a more desirable choice in this new feat economy:

And here are some other smaller, but not necessarily less significant changes I've made:

Let me know what changes you guys like and disliked and why.

Great news,
I play windowed and when I switch to another application, Underrails always crash when I come back, any news on this bug ? (or some info that I can provide ?)

Gameplay :
I found that weapon degrade too fast but this update will fix it
No way to refill psy point without appropriate feat (I admit, I didn't looked in Wiki/Forum)

I found your game very good and with great feelings about world description.

Looking good. Would love to see a fix to the crashing when switching applications.

Regarding the feat change, maybe add a bonus feat at 15 and 30. That way it is closer to the 22 you originally intended.

Regarding the windowed mode crash. I tried to reproduce this on a number of systems during debugging, but failed.

I'll introduce crash log with the next update, so if I don't figure it out until then hopefully that will give me some clue.

At your service to solve this nasty bug,

Good work. Waiting for you releasing the game as finished.