Take a quick look at some of the new GUI features in the engine.

My name is Matt and I am the lead developer for Game Of Engines. I am writing this small article to give you some detail as to what has been going on the past couple of weeks with engine development.

1. Thanks
First off, I would like to thank all of the people that have been supporting GoE. It is always nice to hear your good comments and I hope the product blows your f****** mind off.

2. Release Date
Secondly, A lot of you have been asking about the release date for the engine. The first public Alpha is expected to release in a week or two after a small livestream to help you setup the engine and learn about it's basic features.

3.Bugs
This past week I have been stress testing the engine and seeing just how much it can handle before it blows up my Mac. For a game engine in it's early Alpha, I was surprised by just how much it could take: 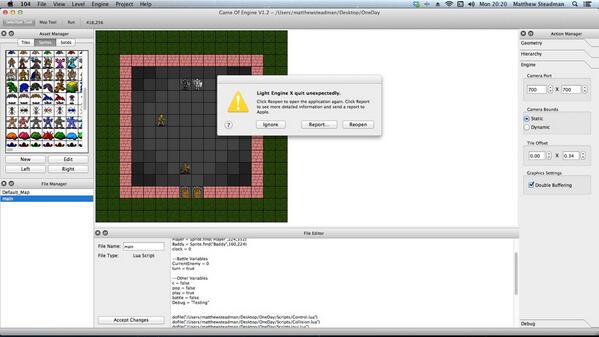 4.GUI
The new GUI system for GoE is coming along just great and the creation is super simple. If I wanted to create a button then I could do so with just one line of code and I could even put a custom texture on it with 2. Example:
MyButton = GUI.Button(0,0,"Hello World")
MyButton:setTexture("path-to-texture")

So as you can see, getting your game up and running takes mere moments. A few of you have PM'd me asking if you had to keep the default GUI colours. The answer is NO. The GUI's I have been showing off in the screen-shots are just some s*** programmer graphic-powered bull that can be fully customisable.

5.Toolkit Updates
For now I am taking a break from working on the toolkit to focus on the Engine itself. The more games I create on the engine, the more i think: "Wow. The Toolkit Needs This..." or "Oh. I Forgot To Implement That" so I have begun writing up a huge list of things that need to be revamped for the toolkit's next massive update.

If you were wondering, here are some of the things I will be implementing soon:

Quite a lot to look forward to there.

6.Mac
I am surprised a lot of you have not brought this up yet, but for the past year I have been developing the engine on a Mac instead of PC. I would like to assure you that just because the latest screenshots are of the OSX version of the toolkit; The windows and linux versions still work...ish.

A few weeks ago, I announced our new project entitled ALICE. This is our project name for the Windows version of the engine - As of right now 05/03/13 the Windows Engine needs a big lua update and a lot of importation and cross-obj-c itteration from the Mac version of the Engine but we should have that fully operational by Alpha Release.

7.One Day
At this point in the post I should apologise for any grammatical errors I have made; Like most other developers, I work late. Anyway, A few days ago I announced a new game being developed in the engine via Twitter. This game is entitled One Day.

Although we do not have an immediate story line for the game, we can tell you that it will be short and sweet. Something to show off the Engine's capabilities and keep the player amused for a few hours. The last One Day update was shown in the following picture but a lot has changed since then (including the genre): 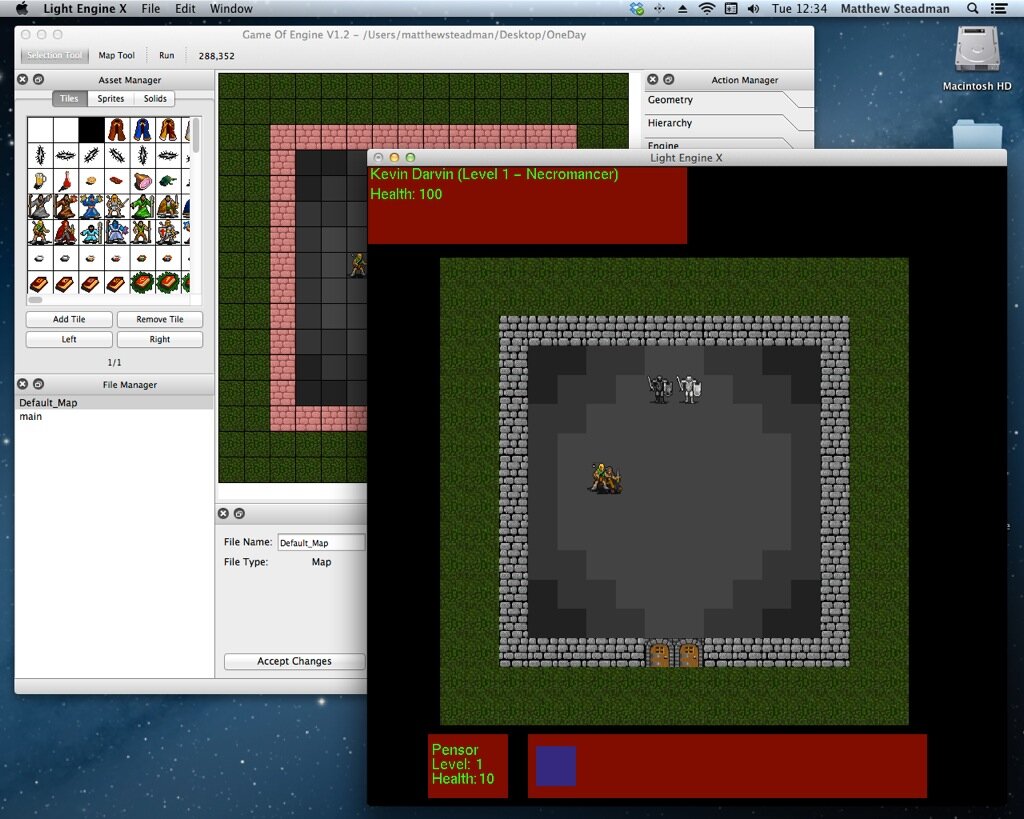 8.Fin
Thanks for reading this everyone, I would once again like to apologise for any grammatical mistakes I have made in the post and I will keep you updated with these kinds of Articles more often.

Nice, I cant wait for the release!

Btw may i ask why ALICE? Did you name the project after someone special, or is ALICE an abbrevation of something? (Asking purely out of curiosity)

You don't need to appologize for your grammar, i haven't found any problems with it.

I simply named it Alice because I was watching Resident Evil at the time. Some may get the reference.