Posted by wojdylakrzysztof on Mar 12th, 2021

With hundreds of NPCs in Gamedec, wouldn't that be great if a player could have a deep, immersive conversation with every character in the game? Even with that somewhat random NPCs just loitering and minding their own business? Then again, some players would feel compelled to talk to everyone in fear of missing out on a hidden quest, a clue, or collectible codex information. That would result in a terrible experience.

This is why we have a mixed bag of NPCs in the game - amongst some complex, heavily branched interactions, there are smaller roles, such as Cowgirl_1, a minor resident of "Harvest Time" - a Wild West-themed, FTP farming multiplayer game you can visit as one of the sensory worlds in Gamedec. 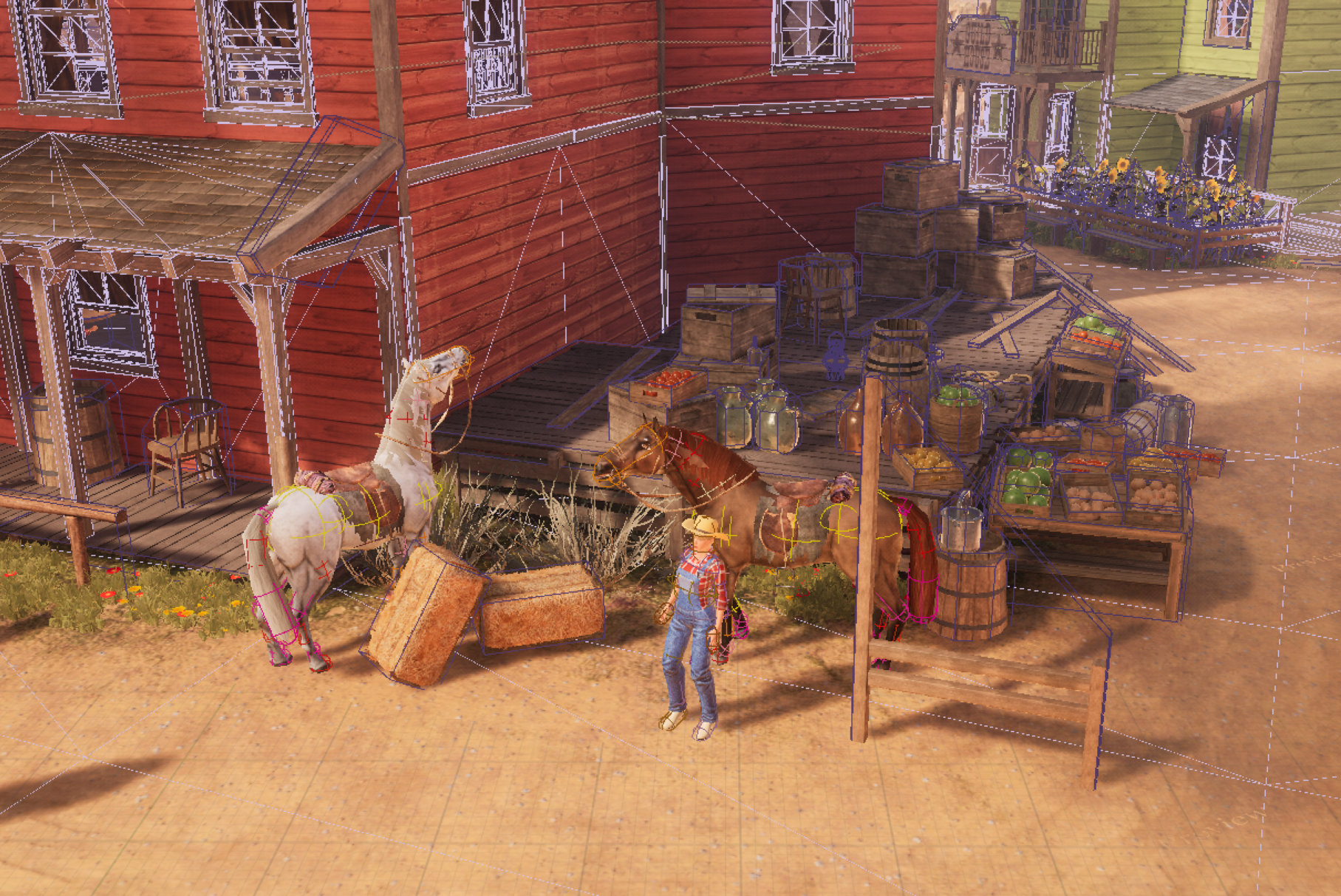 In the design document for "Case: Harvest Time", Cowgirl_1 was described as a minor NPC, a source of 1-3 clues for the investigation. This limited description gives the designers plenty of creative opportunities. One way to design this interaction would be a simple hub with four dialogue options:

1. Gamedec receives a piece of information along with Clue 1 - no special conditions required.

2. Profession condition - this option is available only to gamedecs with a specific profession, which grants them Clue 2.

3. Branched dialogue: a short exchange with a player decision: one leads to Clue 3, the other results with alternative reward (in this case, Aspect used for character development).

Here is a flow of this conversation with some color coding: clues (green), profession condition (orange), choice (yellow), Aspect reward (blue). Such a simple, bare bone design is called "skeletal" and needs to be developed further, even for such a minor NPC as Cowgirl_1.

First, let's call the NPC "Millie" and set up a scene: The player encounters Millie and her horse in a local town center. Since she's not difficult to notice, I decided to drop a few obstacles at the players to prevent them from grabbing precious investigation clues too fast.

At first, Millie will not speak with a gamedec - she is busy with her horse. Instead, she'd only reply, "Don't bother me, can't you see I'm grooming The Princess?". No other conversation will be possible until she is approached again later in the game. This looks good on paper, but our internal tests showed no one would revisit Millie after getting repelled at the first encounter. Apparently, she was too harsh, so her response was modified to "Hi, please, come back later, I'm grooming The Princess now." That small change not only made her appear friendlier, but players would return to her, as intended.

The internal tests also showed that it was relatively easy to get most of Millie's clues, which wasn't fun enough. One more small obstacle had to be implemented to address this issue: Millie only gives the clues if the gamedec wins her trust first. I needed to explore the cowgirl's background a little: horses are her passion, so I started there. In the GamedecVerse, the virtual worlds are practically the only way for people to experience livestock. Millie loves horses and considers herself a horse expert, and she is full of horse-related trivia. But what if all her knowledge comes from games? This is not a plausible scenario, even in our reality. She'd claim that "horses are always awake" (because sleeping horses are not implemented in the game), or "Never come behind a horse… cause horsetail might hit you super hard and even kill!" (probably a game bug in "Harvest Time" that an uneducated player takes for real).

In fact, this exact bug happened to us during the game development. We were tempted to leave it because it was hilarious, but eventually, the bug was fixed.

One way to win Millie's trust would be sharing some weird "horse trivia" collected by examining different horses in Harvest Time. Additionally, if Gamedec owns a horse (you can get one on a playable farm), Millie finds her new horse-buddy and happily shares some gossips (clues).

At this time, I needed to briefly explore who Millie was in her "real life"; perhaps a teenage girl playing "Harvest Time" every waking hour alone in a dark habitat compound, cocooned in her virtual couch. Was she addicted to the game, or maybe there was another reason for her confinement, such as a physical disability? I decided that Millie lost her real arm, a fact that could be reflected in the virtual world: she would occasionally unusually wave her hand. A negligible detail, however a gamedec with a medical profession could take notice of that and discuss the subject with the girl. A sincere conversation with a doctor would surely win Millie's trust, along with a few investigation clues.

Then came a moment of reflection: are there even any disabled people in the Gamedec Verse? I reached out to Marcin Przybyłek, the author of the books and curator of the world consistency. He warned me that I should "hold my horses" as there are hardly any disabled people in his universe thanks to the medical advancements. He added, much to my relief, that the girl might be still recovering from surgery - regrowing a lost limb could be a long and expensive process. The girl's father works day and night to support her treatment, hoping she recovers soon – that's the reason Millie is alone at home. She dives into the virtual world of Harvest Time - a happy, colorful place with horses. 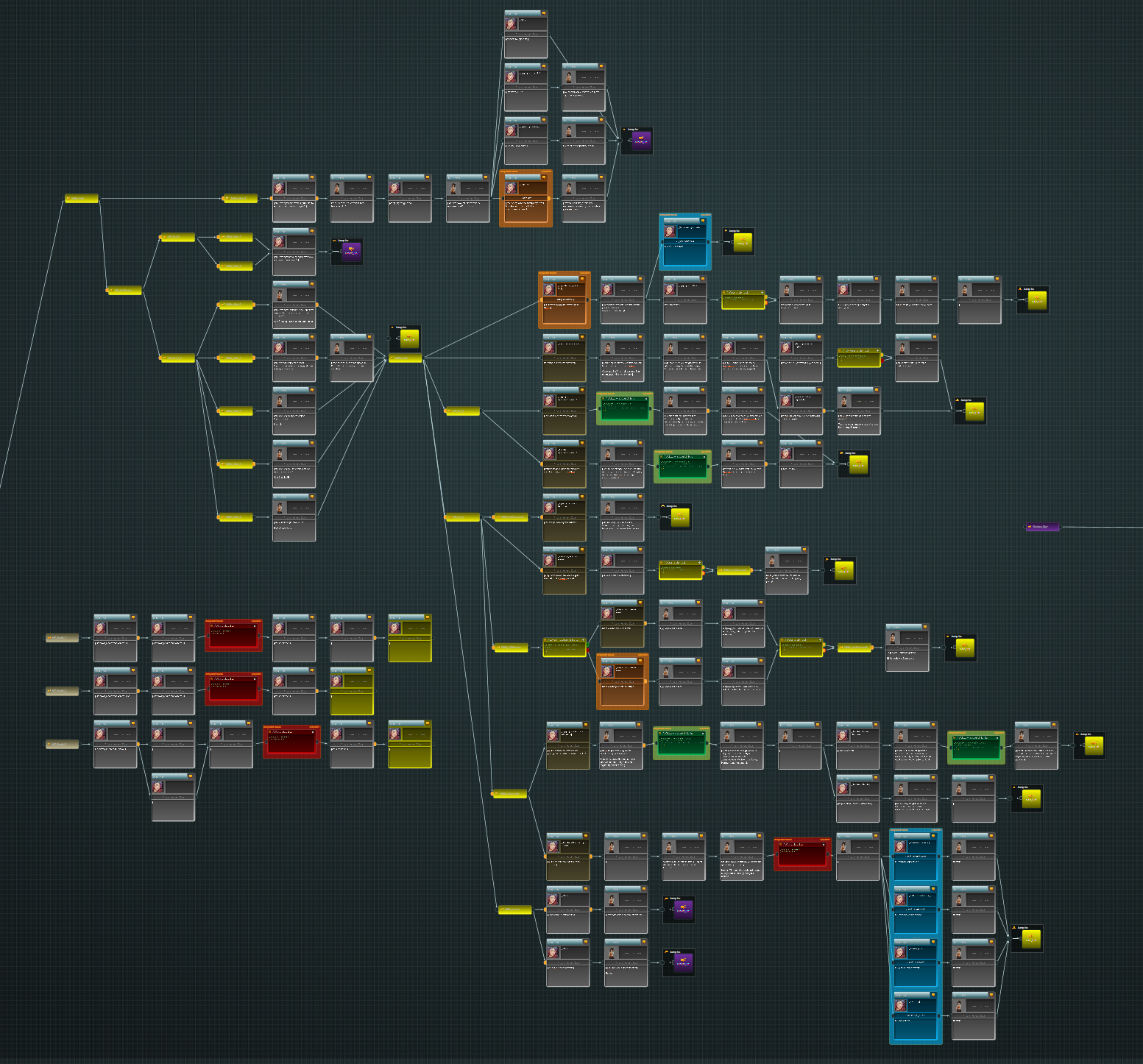 This minor NPC gained some backstory, and while it's not essential to the investigation, it is a vital piece of the world-building. Hello, Cowgirl_1 - you are now Millie from the futuristic Warsaw. See you in the game!