What is the point of a block game if you can't destroy everything around you? This Dev Diary is covers Rocket Launchers (yes multiple types), Grenades, Explosives, Detonators and Blast Resistance for blocks

What is the point of a block game if you can't destroy things? Voxel Turf has a wide array of explosives to unleash upon the world. If you like to be able to destroy everything you've came to the right place!

Rocket Launchers fire a rocket a target and can destroy blocks. All rocket launchers deal large amounts of armour piercing damage if they directly hit a target, and they all do splash damage. There are 4 kinds of rocket launchers:

Grenades have a fuse of 3 seconds, and do a similar level of damage as the rockets do. These are great for flushing out enemies in hard to reach places. However, the do not have the direct hit bonus that rockets have against vehicles.

Clip: Clearing a Bandit Base with Grenades

All blocks in the game have a threshold of being destroyed, with grass blocks for example being easy to destroy, and steel blocks being nearly impossible to destroy, without heavy explosives. 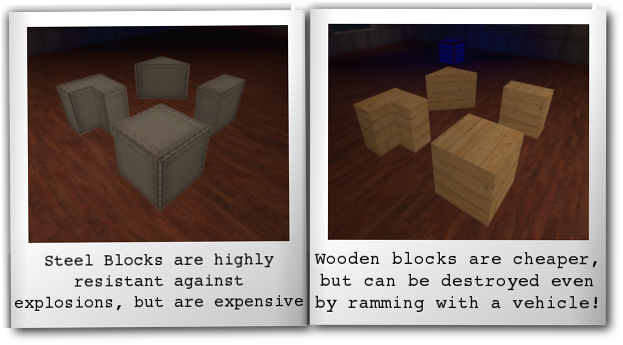 Blast resistance is also used to determine if a block can be destroyed by a vehicle ramming into it.

Using multiple explosives together will slightly increase the power, but not the radius of the explosion.

There are 2 kinds of explosive blocks: Explosive crates and explosive detonators.

Explosive crates have a large blast radius, and a substantial explosive power – they can even punch though steel walls! However, they require an external explosion to go off.

Detonators are used to create small, but powerful explosions. They are useful for making precise holes. These work best to set off a chain of explosive crates. However, they are an electronic block and can be wired up with switches, leavers and even pressure sensors to create traps!

Next Update is going to be on Mechanisms and Electronics. Stay tuned by watching us on IndieDb, favouriting us on Steam or Liking us on Facebook!