This week the UI was redone and there is a big game plan as to how it will go. (Plus some other things.) Tune in and read all about it.

So as stated by the summary, the UI was redone. Let's be honest, that old UI was absolutely atrocious. There wasn't even a thing to tell you bomb usage and score. Just some text and a broken rope display. That was fixed this week. I sat down, planned out a UI in my image editor, rearranged it many times, did some sprites for it, and now I'm happy with it. It looks good.

You can clearly tell with the new UI what control scheme the players are using. Gamepad 1-4 are indicated through the little green/red squares. As you could infer, that gamepad is gamepad one. You can also tell very quickly all the stats. A for ammo, S for score, and ropes and bombs are easily distinguished. (Even though they're backwards. I should fix that.)

The next major thing that happened is a game plan for the last levels. The first 7 levels will be normal kind of thing, new enemies/items/guns each level. The way the enemy/item/gun roster changes per level is also something to be noted. But anyway, at the last 3 level, (skip this is you don't want spoilers) you fight all the enemies you've killed up to that point in ghost form. They have 2x the damage and points, but half the health and don't drop anything. (Except ammo and medkits.) 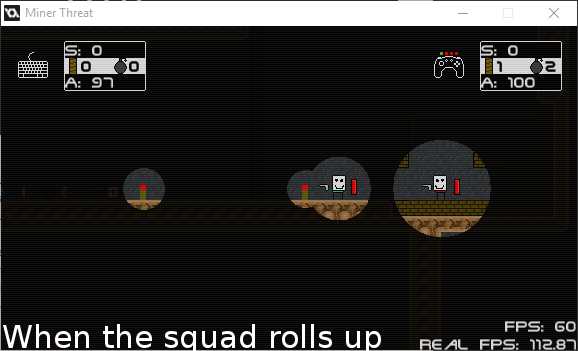 I'm not really sure how to give image representation to the last paragraph, so here is a Miner Threat dank maymay.

The last point, all be it, doesn't affect most players, is that I added a dev console. It allows for me to very easily debug it without some sort of dedicated debugger. AND, it allows you guys to screw with the game if you so choose. I'll probably set the score to 0 for that run if a command is entered so you can't manipulate the game to your choosing and get a highscore, but it's a cool thing most gamers like.

I like how my cursor is in the dead center. Classy. Anyway, every time I put a console in a game, I immediately use it only to find I forgot to block player input while the console is active. So I'll be typing something in only to out of the blue chuck a bomb and a few ropes. That's an easy fix, just fun to mention.

That is all the major things for this week, hope you enjoyed, and remember to tune in next week to see where this masta-piece is headed. (Ignore that, I'm just full of myself.)

EXTRA COMMENT: I seem to have mentioned in the past I release these every Friday. While partially true, it's not entirely. I write and submit these every Friday, but for some reason IndieDB needs to make sure the article is on point and not a heap of offensive content. I would think this far into the dev blog they wouldn't have to (hint hint), but sadly you actually end up getting these around Saturday, so sorry for that.