Miner Threat's biggest dev blog is coming your way! There was a ton done this week, more than any other.

So as the summary states, this is the biggest dev blog yet. There was an immense amount done to Miner Threat this week, and not just behind the scenes stuff.

To start this off, we have the menu. The old menu for Miner Threat was clunky and dry -- nothing to it. The new is not. The menu is actually designed by Dan (gfx slave), not me, but some changes were made to his plan. (Miner ones at that. (HAHAHAHAHAHA)) The new menu is modern and is easy to use. There is help text for each option, and plenty of settings. 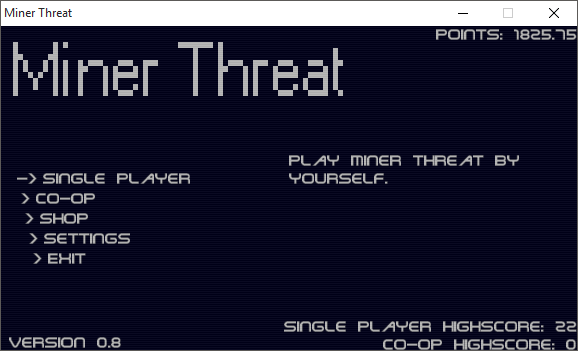 Obviously, I cheated and gave my self a ton of points to test the the shop.

And that brings up the next point -- the shop! Yes, Miner Threat now has a working hat shop. The more enemies you kill, the more global points you get. (In the top right corner) You can spend those points on hats to use in game. There are 3 hats right now, but hold your horses, there are many more coming. Leave a hat suggestion in the comment section if you want. 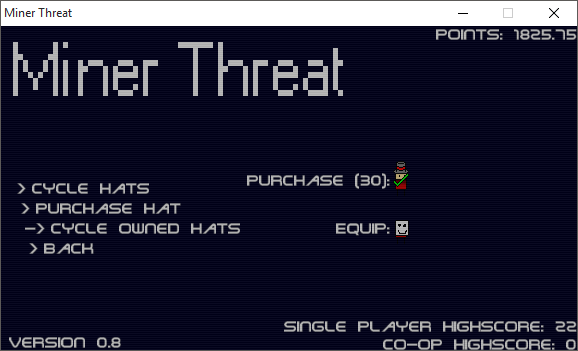 Another thing you might notice on the menu is that there are highscores now! There are two types of points in Miner Threat: global points, and run points. Global points stack up run after run and are used to buy things in the shop. Run points are for your highscores; how many points you get on a run. The coop and single player points are different however, combining the two would be kind of unbalanced. And as I promised many weeks ago, when you die/win, the total value of everything in your inventory is added to your run score, making the inventory management a very big factor.

Furthermore, when you die now, the game doesn't just restart. There is an actual game over screen... 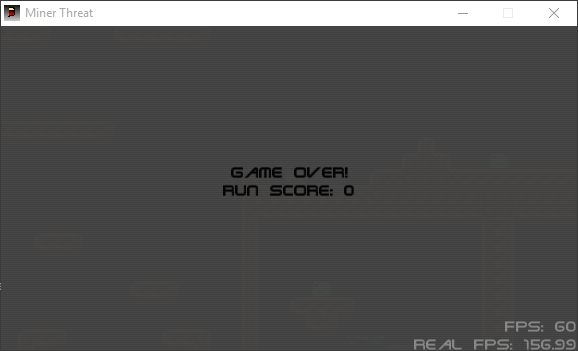 One thing that might not be huge, but worth adding, is a proper credits screen. It's not a big long list, just two slides of all the people who made it possible. If you want to see the old MS Paint version, go here. (I don't want to saturate the blog with photos.) Otherwise, here is the main slide of the new credits. 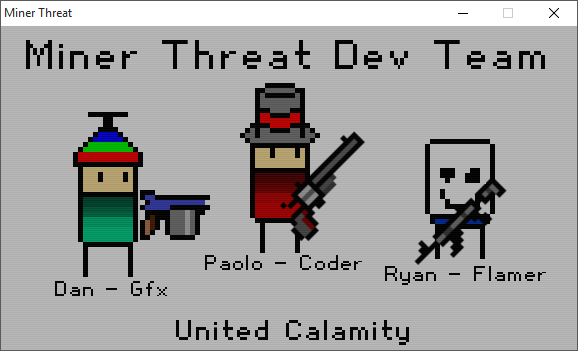 I'd like to think I look like a very serious border guard with a top hat, Dan looks like a 10 year old with a nerf gun, (He isn't.)(I think.) and Ryan looks like some Payday 2 stuff right there. They are kind of representative of us...

Another thing that Dan did that is worth mentioning is gave Miner Threat an actual torch sprite. Go look at past dev blogs to see the trash torch it had. Now the torch is looking pretty dope. 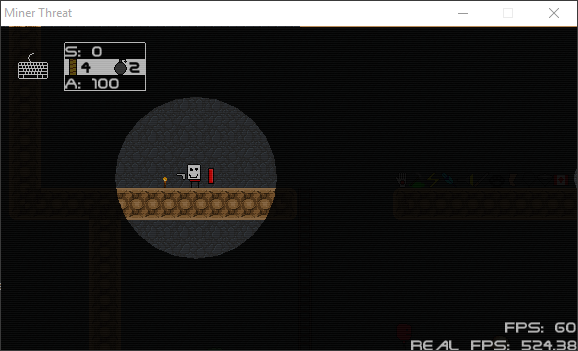 I mean, look! A real torch!

The last really major thing done this week is an intro and some story. Yes, indeed, now there is a reason why you are in a cave. In short, you fall down a pit, in long, you go to investigate said pit and end up falling in it. It's really just a good way to get used to the controls since you can move around in it before entering the game. (Kind of like Rogue Legacy, minus the shops.) So now you must get to the surface again. That's why Miner Threat goes down to up -- I actually planned the story at the start, I just never implemented it. 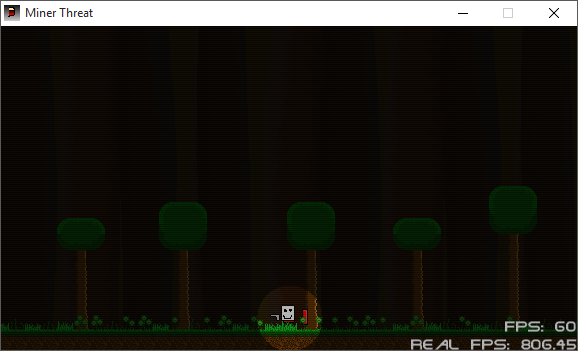 So stay tuned for future Miner Threat updates, the game is really getting there.