Post news RSS Dev blog: What goes into preparing for a Kickstarter campaign

So what goes into preparing for a kickstarter campaign? Does it take as long as people say? And what are some traps you should avoid? All answered here!

So you are thinking of launching a Kickstarter project. But where do you start and what is involved in it?

This post is about what we have done to prepare for our launch with some tips, links, and wisdom that could be useful to you too.

People say that it takes much more time than expected to prepare for a Kickstarter campaign. Maybe they are delusional or just inexperienced in creating and delivering projects in general. This is my first Kickstarter and I knew it would take at least two weeks of full time work to get ready. And it did; two weeks all day every day. It is a lot of work.

A great place to start is to read this Reddit post from LobsterSundew: Reddit.com
LobsterSundew covers every aspect, when to launch, what rewards you should have, everything. If you haven't read it, stop now and read it!

Creating the goals took the most amount of time. I went over them multiple times, scrapped a bunch, down-scoped, and removed rewards, added new ones. The best way to settle on them is to get feedback from friends and other Kickstarters

The graphics for a Kickstarter page make it look more professional. These also take a while to do. Save them till the end after all your goals and content have been decided. It's not fun to redo the graphic titles.

I only spent about two days on the video. One day to make a demo of it, and another day to record the actual one. I did so many takes I can make a blooper reel from it. One thing I learned is to just leave the camera running, and try again. Don't stop recording, delete, and try again. That takes just too long, is frustrating, and erodes your confidence.

One of the best sources of feedback I received was from the Kickstarter LIVE! panel at PAX Prime 2013. It was hosted by Cindy Au, of Kickstarter, and contained several illustrious and experienced panelists: Max Tempkin from Cards Against Humanity, Jordan Weisman of Shadowrun Returns, and Luke Crane from Kickstarter. They got a chance to see the campaign and give feedback. Critical and useful feedback that I highly treasure and implemented into the campaign. I was lucky to have this opportunity, but most people won't be. All I can suggest is to get your preview page (yes there is one when you are creating a project) in front of as many people as possible. 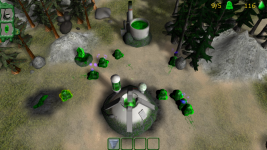 Can backers get a copy of your game of just $10? People like to spend $10, give them something good. Add $5 and get your name in the credits; that makes it easy for them to give just a little more. Rewards like that are easy. Physical rewards are not.

We stayed away from all physical rewards because they can be a nightmare to deliver. It is also the most vocal feedback successful Kickstarters give: "do not have physical rewards if you don't have to!"

There's a lot that is overlooked with them. The manufacturer might not deliver the items in time, or they might not even deliver them! Some items will be flawed, and you need to send them back and order more. All of this adds to the cost of the reward. Shipping as well is a pain and very time consuming. Some good advice given, by I believe it was Max Temkin of Cards Against Humanity, was to mail the product to yourself first. With the packaging, the packing material, going to the post office, and seeing if it arrived to you still in good condition. Now think about doing that 300 more times to your backers! Doesn't sound good now does it?
Also, with physical rewards you have to subtract the cost of them, the damaged ones, and the shipping. This is money taken right away from what the pledge; that $50 pledge just turned into $20, less than the lower tier you have. So please think about physical rewards. They cost a lot of money and a lot of your time.

Don't have your reward system too complicated. Keep it to about 6 or less if you can. And cover the range of rewards under $100. People can always pay you $10,000 if they want, there is no fixed donation amount. And if you have one of those massive $10,00 tiers then the reward will no doubt be something you regret having to deliver. I thought of offering a fishing trip for one day. But the logistics of it would be incredibly difficult, would cost about $400, and the time to do it would take away from development of the game.


Everyone is an expert

I don't mean this in a bad way, to the contrary. People who have run Kickstarter campaigns are experts on it and can give you some great feedback. But every campaign is different. Did they reach their goal in 48 hours, or was it down to the last 48 hours?

It can all be useful information, but take what you think fits with you. If you are repeating that they did and it didn't work out, take their advice and don't do it!

You have to be ready for this. Get the contact information ahead of time for all websites you want to contact. This takes several days and is exhausting. Keep the info in a spreadsheet, record who you have contacted, when, and if they followed up and if there is a link there.

Have a web page. Here you want to link to your trailer, Kickstarter page, and if at all possible, the demo.

You do not get the link to your Kickstarter project until you hit the ‘Launch' button. So you will be in a mad rush to contact media and friends when it does go live. Prepare your press releases ahead of time. Different ones too: casual for friends, ones for gaming sites, ones for other media. Make it easy for yourself to copy the press release, personalize it a bit, and hit send.

And have a press kit set up ahead of time. The media will want to know what your company is about, even if it is just you. I recommend Dopresskit.com.

Have a demo of your game ready! People love to see that you have something, anything. It gives them confidence. And they will understand that it is still in development, don't worry about harsh criticism. It also helps to have a link back to your kickstarter page in the main menu of your demo. People might tweet or email their friends the demo but not your kickstarter so make sure everyone can reach it. 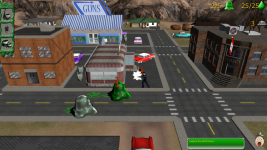 It definitely helps to let friends and followers know each day a few days before launch that you are having a Kickstarter campaign. A single tweet saying "we launched" can be missed very easily. Be vocal about it, talk about it a couple times each day.

Pick a good day. Not during E3 or PAX. Not a Friday. And not during Apple's surprise iPhone 5s announcement, thanks Apple.
Just make sure you do launch. You can only delay so long. Unless you are building up a huge community before hand, there is no perfect time. Hit that button when you feel ready and go.

Be sure to check our kickstarter as a reference for what I am talking about above:
Kickstarter.com

And if you missed it, we also have a demo of Attack of the Gelatinous Blob ready for you to try out!