This week is basically just tweak week, so all aboard the HYPE TRAIN.

As the title states, mainly just a tweaks week because I've been excessively busy. I've literally played one Steam game since the weekend, aside from testing the lag in another. My friends played the game, and there were two things they complained about: how dark it is and the lack of the tutorial. I don't care about the latter because they played a dev build from Dan, and I'm not making a tutorial until it's released, but I did deal with the former.

He wanted a gamma bar, but this isn't a horror game, so you can deal with it. I just made it slightly (About 10%) brighter than before. I understand not everyone plays in a nocturnal setting where the only light is my laptop's monitor, so there might be a glare or something. I also made the light around the player brighter. 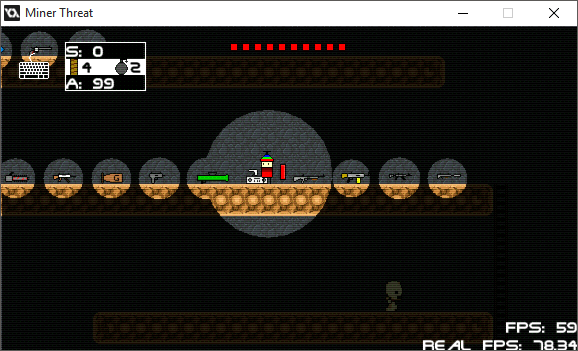 I don't know if I spoke of this last week, but I'm thinking I'll change the "4 ropes 2 bombs" to a timer based system. Once you use a rope, you wait 30 seconds or something to use it again. Maybe. Anyway, I know I didn't show this item and it's long overdue so here it is.

Just for the record, I fixed the textbox the second after I took that gif. I had to change 1 character to fix it no less.

And for the sake of transparency and there being nothing else to screenshot (unless I'm gonna start showing off code) is a glitch. I tried a little too hard to optimize the enemy movement so instead the ghost decided to float in the air without gravity. A+

So that's all there is to show you this week, come back next week for more cool stuff!