As the title states, the game now makes levels from a different type of chunk.

The game still generates levels the same, but now it gets the chunks a different way -- a faster way, and potentially more customizable. If you read the blog on how the dungeon generator works, you'd know that it uses images to make pieces of the level. Now it uses text files. The text file looks like this: 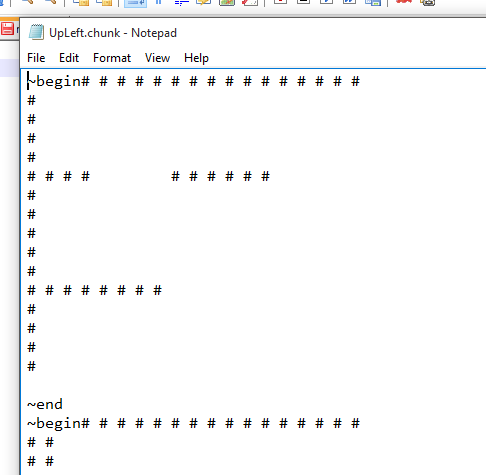 It looks like gibberish, but it's quite simple. First let me say that I accidentally screenshoted a broken file, the "~begin" tag needs it's own line. But anyway, the ~begin tag indicates the start of a chunk. Each chunk is 16*16 in size. A "#" represents a wall, and the other things like enemies and props have other ASCII symbols. Can't remember them all. What I'm thinking of doing is allowing for other tags than "~begin" and "~end," maybe something like "~enemy_rate 50" to say only 50% of enemies should spawn here instead of all. The enemies spawned would be random. Or better yet, maybe a special wall with a tag like "~wall_chance 25" saying that there is a 25% chance to spawn the special walls. I'm still debating on this, so no promises, but I think I might do it.

Other than that, there hasn't been too much else done this week to talk about. I mean, adding basic mod support is pretty big, so it's definitely something. I'll rant anyway. There is two major things done this week other than that, and they are optimizations and balancing. Jump height is now hindered instead of speed for classes other than scout and normal; as well as tweaking a few guns to make them more powerful.

The last thing is somewhat noticeable, I went ahead and compiled three performance reports for Miner Threat and spent a couple days just optimizing. The main game runs about 4-10% faster now, so that isn definitely a good thing. I couldn't really demonstrate the performance via a gif when I have eight windows open and two tabs in chrome, so here is just a gif of the test level

At it's usual quality, the gif was 5.5mb, so I had to turn it down to get it 2.1mb. So it's slightly lower quality than normal. Anyway, thanks for reading!