After a year of development I am finally in a state where I can show you guys some ingame videos and explain the game mechanics.

Since the release of the trailer in July I made great improvementes on the gameplay of Timeless War. I improved the combat system and damage calculation, the base building as well as the unit production runs quite as it should do and even the performance has been optimized a great lot. To drive the latter to its limits I first tested with 40 units and structures with a stable frame rate between 30 - 40 fps. Even when I played with 400 objects at the same time I had at least 10 fps, even though it was on my test map counts as epic sized map with its 400 square kilometers. In my battle demonstration video below I recorded a fight with 200 units on 5x5 kilometers map. Also I was playing on highest settings and resolution with all light and shadow effects as well as all available DirectX 11 effects at maximum. But I have to admit that my machine is 4 years old except for the graphic card.
For those who are interested: AMD Athlon II X2 250, GForce GTX 750 Ti, 4GB RAM, Windows 7.

To increase the performance I used timers to avoid calling unnecessary functions, that are not needed to be calculated every frame. For example to check the requirements for units, structures, upgrades, weapons, locomotors, special powers of if an unit is moving on a so called super-object like space ships. Further optimization will be done on the physics calculation which can bring a great fps bonus even in mass battles with hundreds of objects involved. A special function I implemented is "time dilation" which scales down the games speed acording to the current fps to make the gameplay manageable even on low frames count.

Base Building.
The base building system was a challenge on its own. I tried to implement a build radius system, but the problem was to create a visual representation and its not perfect yet. The goal was to create a radius decal similar to the one that is know in C&C3 Tiberium Wars. The check for the building that is to place and the terrain is tested and works well. I also tested a system to block the placement if other structures are in the way and it will be added for the next update.

For the now I am using the Asens Bifröst as Command Center for all factions. Temporary I made the Structures of the U.N.I. (United Nation Initiative), a non-playable faction whichs goal is to expel Asen and Pandoras from earth. The Barracks allows you to train infantry units, the Warfactory on the other hand to build vehicles or larger units. WIth the Airfield you can build aircrafts. I am not sure if the runways should be fully functional for starting and landing airplanes or if the game should only have VTOL aircrafts. Since Timeless War plays in a pure Sci-Fi world the latter would be most plausible to me.
One of the most important structures is the Power Plant. It fuels your base with energy and is important for Radar-Towers and Sentry Guns. Currently the tech-tree doesn't go any further, but later it goes up to Renegade classed units and super weapons.

Combat-System & AI.
The combat system is very simple. You can click on unit like you are used to in RTS games and give it the order to attack. The unit AI on the other hand is a bit more complex. An unit has 4 different stances: cease fire (Passive), return fire (Defensive), fire if in range (Normal) or engaging if in sight (Offensive). The challenge with this was to make sure that ground units cannot attack aircrafts if they dont have the weapon to do so and vice versa. In addition the combat system will make sure that the units count will be manageable in most cases because like you might know form games like Command & Conquer Generals, the death of one of your unit will grant your enemy EXP which than can be used for new devastating abilities and technologies. This means that micro management will be very important for a successful battle.

Damage Calculation.
For the damage calculation I took a little bit inspiration from EVE Online, a great MMO btw. There are 3 kinds of life bars. The common Health (green), Armor (some kind of gray) and Shields (light cyan). 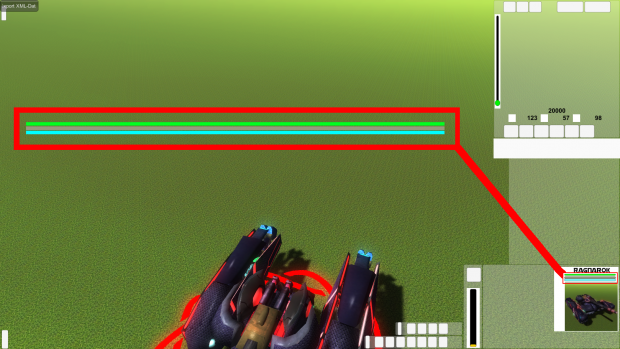 In normal cases the Shield is consumed first, then the Armor goes down and then Health of an unit or structure. Some special weapons however punch through and directly cut down the Health. Are these use up the unit or structure will be destroyed. Additionally there are various types of damage. Laser, Plasma-Cannons and EMPs for example are eating up Shields pretty fast but do have to nibble onto the hard Armor. Solid projectile weapons and missiles have problems with Shields, but as soon as the got through them they crack it really fast. Weapons with pollution effects however consume Health very fast, but until they got there it will take its time. And then there are the weapons I mentioned above that completely ignore Shield and Armor to directly affect Health. Those damage types are very rare and highly expensive, but perfect to break a tough defense without relying on super-weapons.
For even more depth the damage has a scaling for each weapon that determines the damage done to an object by type or specific objects. With that system I make sure that for example that infantry is never useless can be dangerous to larger units for balancing purpose.

Thank you for your time to read this much and I hope you enjoyed this update. Let me know what you think about this. :)