The Eurogamer Expo in London is one of the UK's biggest gaming events. Upcoming, old, AAA and indie games fill up Earl's Court for four days of promotion and public gaming. The weekend also saw another special event happen; three Traction Wars developers met in person the first time. As you're probably aware, TWDEVs are located all over the world, with communication only happening online, so you can understand why meeting in person was such a big deal!

The Eurogamer Expo in London is one of the UK's biggest gaming events. Upcoming, old, AAA and indie games fill up Earl's Court for four days of promotion and public gaming. The weekend also saw another special event happen; three Traction Wars developers met in person the first time. As you're probably aware, TWDEVs are located all over the world, with communication only happening online, so you can understand why meeting in person was such a big deal!

Of course at any such event there will be large crowds, and subsequently large queues. Though we certainly did our fair share of queuing, we also got to preview upcoming games such as Battlefield 4, Wolfenstien: The New Order, Gran Turismo 6, #Driveclub, Rocksmith 2014, and Watch_Dogs. We also got a chance to play with both new consoles: the Xbox One and PS4. Though neither match up to high-end PC graphics, the console improvements were clearly visible. Battlefield 4 was running on the Xbox One but, although very smooth, lacked in any noticeable changes over its predecessor, despite how fun a 24-player LAN match was. Though few games were playable on the PS4, all three of us were impressed by Sony's new controller. 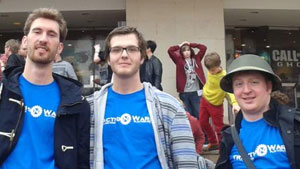 We totally weren't stealing any publicity from one of the Gran Turismo 6
screens...

The big games weren't the only thing on show, in fact independent and smaller games took up a relatively large area of floor space. We spent a large amount of time down the Indie Arcade aisle, where small, often unfinished and unreleased, games are presented to members of the public. These included games such as Chroma, CarTank Fist of Awesome, Skipping Stones and Myriad. Smaller games outside of the aisle included, War for the Overworld, Luftrausers, Dream, Hotline Miami 2, Velocity 2X and Surgeon Simulator 2013 which, although none of us played, is hilarious fun to watch!

There was also some new, and familiar, technology on show. The one that excited us the most (so much we queued for over 90 minutes!) was the Oculus Rift, the virtual reality headset with the aim of completely immersing you into the game. The principle is very promising – where our demo offered the ability to sit behind the space fighter controls in Strike Suit Zero. The downside was the resolution of the headset which looked similar to standing too close to an old TV screen. This will certainly improve over time, and I thoroughly look forward to seeing the next generation of the hardware.

[TWDEV] hannibaldinski uses his time with the Oculus to plot his new (possibly evil) schemes.

Imagine playing Wii Fit on a bus and you're pretty close to what watching someone use the Oculus Rift's Omni treadmill is like.

All in all we had a great weekend of playing games, meeting people and, of course, discussing Traction Wars! As it was such a different way of communication to what we are used to, ideas were being thrown about from everywhere – with often somewhat strange results. We weren't showing off our game, but it is an incredibly exciting thought that one day we may be presenting Traction Wars in a similar environment. Talking to people about Traction Wars (and giving them our card!) was very motivating. It also makes us grateful to have such a positive and communicative community, even though we are often annoyingly vague on certain questions! We are just gamers making a game. We do it because we want to do it. It is a fun, exciting and entertaining experience, and we really look forward to going through the next stages of development with an encouraging and positive community!

I also got to play on the 'Doom Piano'; which was incredibly confusing and difficult…

We couldn't finish a meet up without a trip to an English pub!

Interested in joining the team?
The team is currently looking for lighting and particle artists who have experience in CRYENGINE3. If you have the experience and are interested in being part of our friendly and professional team then please head over to our recruitment page for further details.