It’s official, we are nearing the end of development of our game “Something Ate My Alien” and we will be releasing it on the Steam platform in April 2020! 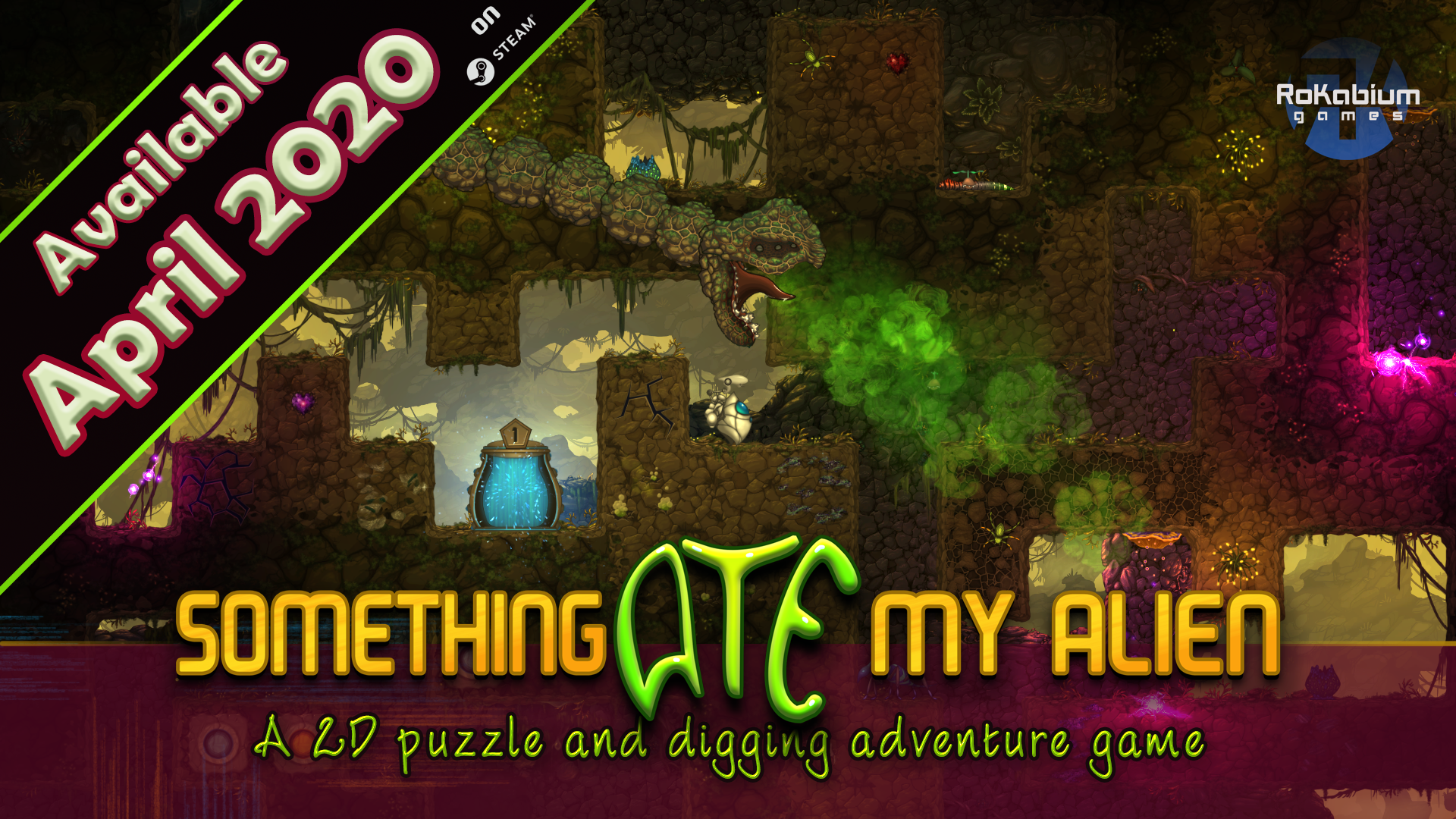 Reaching this milestone and being able to set a date for release is extremely exciting and a bit scary for us. When we started developing this game all the way back in 2016, we had no idea just how much work we signed up for and just how long it takes to develop a game when you are only 2 people doing it. Reflecting on that makes this day feel even sweeter, to finally start seeing the result of all that hard work.

So, in this blog we’d like to give you all a quick breakdown to let you know how SAMA developed since our last dev blog back in August 2019.

Changing the level design to be more linear in the beginning of the game has been a good move with our Alpha testers. We continued following this path and doing some more tweaking on the remaining levels and trying to add certain design aspects to each level making each one more unique.

The puzzle rooms are now sorted in difficulty order from 1 to 10 in each level. If a player finds one tricky they will now know which ones should be good to start with and which ones are better to leave to the end.

2-block enemies now stay in specific areas specifically designed for them rather than being spawned randomly across the levels. We kept getting a lot of weird behaviour and bugs with the bigger ones moving across areas where they’d get stuck on 1 block ledges. This way they not only work as intended; they are now a bigger part of the level design in acting like smaller mini bosses with specific traits that will make it harder to get through certain areas. 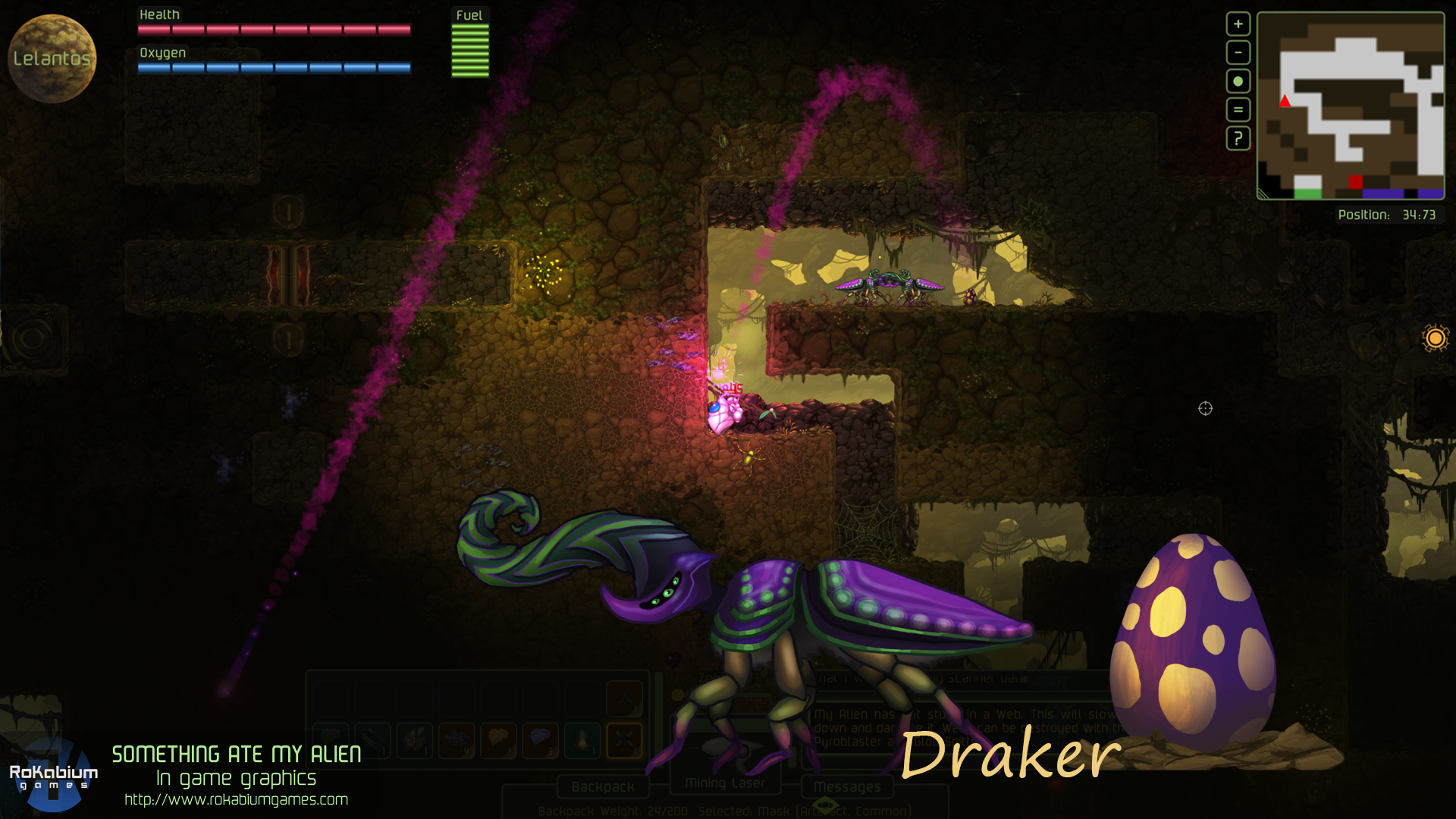 Several enemies have got an upgrade in looks, how they act and what they can do to add more diversity in enemy encounters and battles.

The Oyse bulbous plant creature starts pulsating and will blow up and multiply if you approach too close to it. The Phantus can now both fly and walk moving up and down to ledges it previously could not reach, making it hard for you to avoid it or even hide. Oh yes, it also shoots projectiles through it’s tail, making it a very dangerous enemy.

The Draker lay eggs that explodes and expels a powerful missile seed that can go through blocks to find you. The Guld leaves trails of little bombs that are deadly and the Murderia shoots out single projectiles in all directions like an automatic weapon. The Bagice can now grow its sharp crystal tendrils from the ceiling as well as the floor and the Kator does a roll at high speed to try and hit you like a bowling ball. 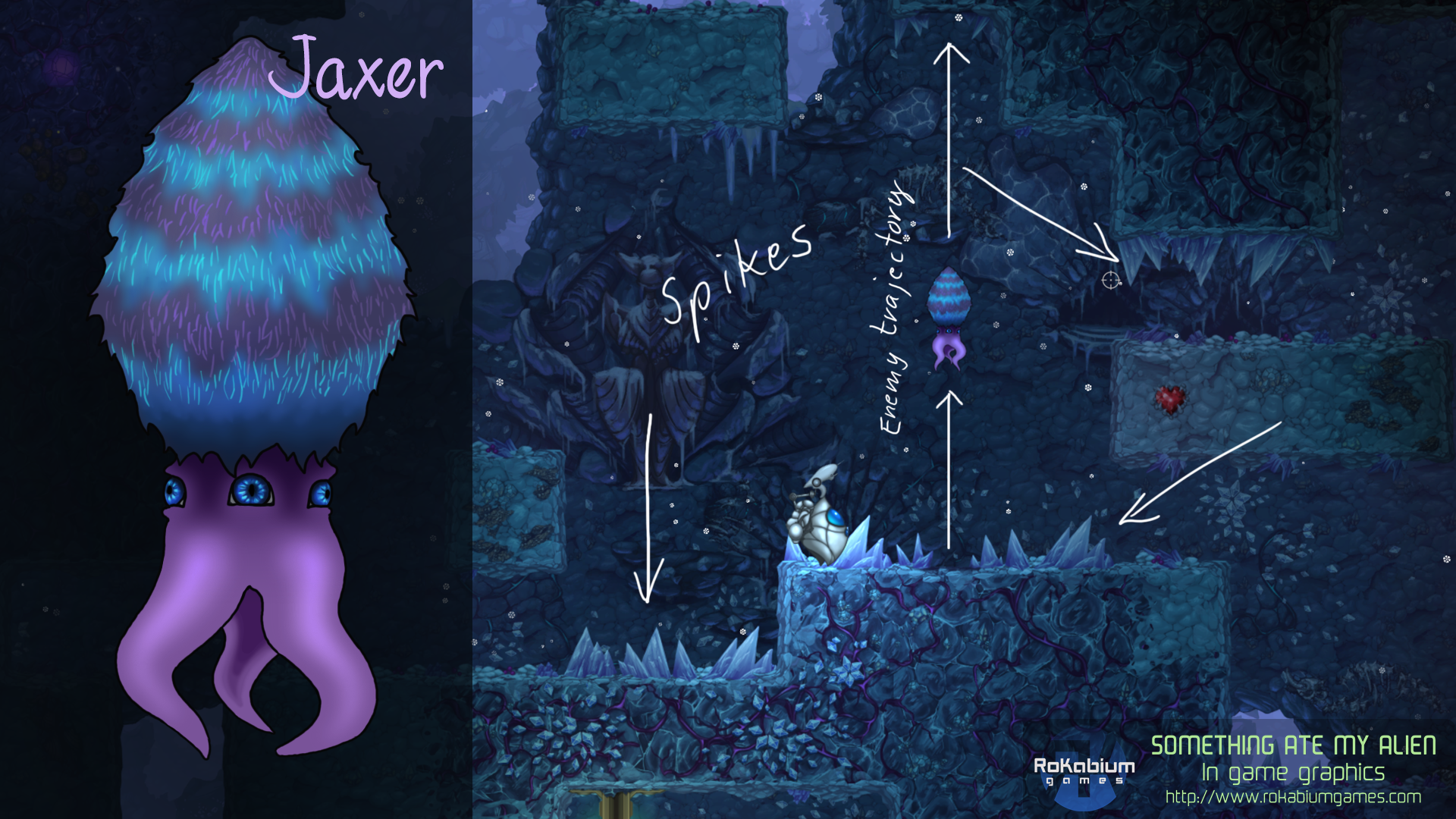 We have added a new Enemy to Aura called Jaxer. It hides in blocks and shoots out as some speed when the player gets near. Around the floor and ceiling near the Jaxer nests we added icy spikes that will warn of this enemy hiding nearby but also to add some difficulty in trying to pass these nests without taking damage.

The Bosses have all been given an overhaul in movement tracks and the speed and variation within those tracks. Some extra things were added to make them feel more unique such as projectile impacts spawning enemies. The final boss scene has an environmental mechanic to help with the fighting. The bosses now also drops higher ratio of health and oxygen boosts so the player has a fairer chance of fighting without running out of oxygen before fight is over for example.

We changed the name “Inventory” to “Cargo Bay” in the menu to make it clearer this is the content you have collected and have stored in the ship, not what you are carrying on you. 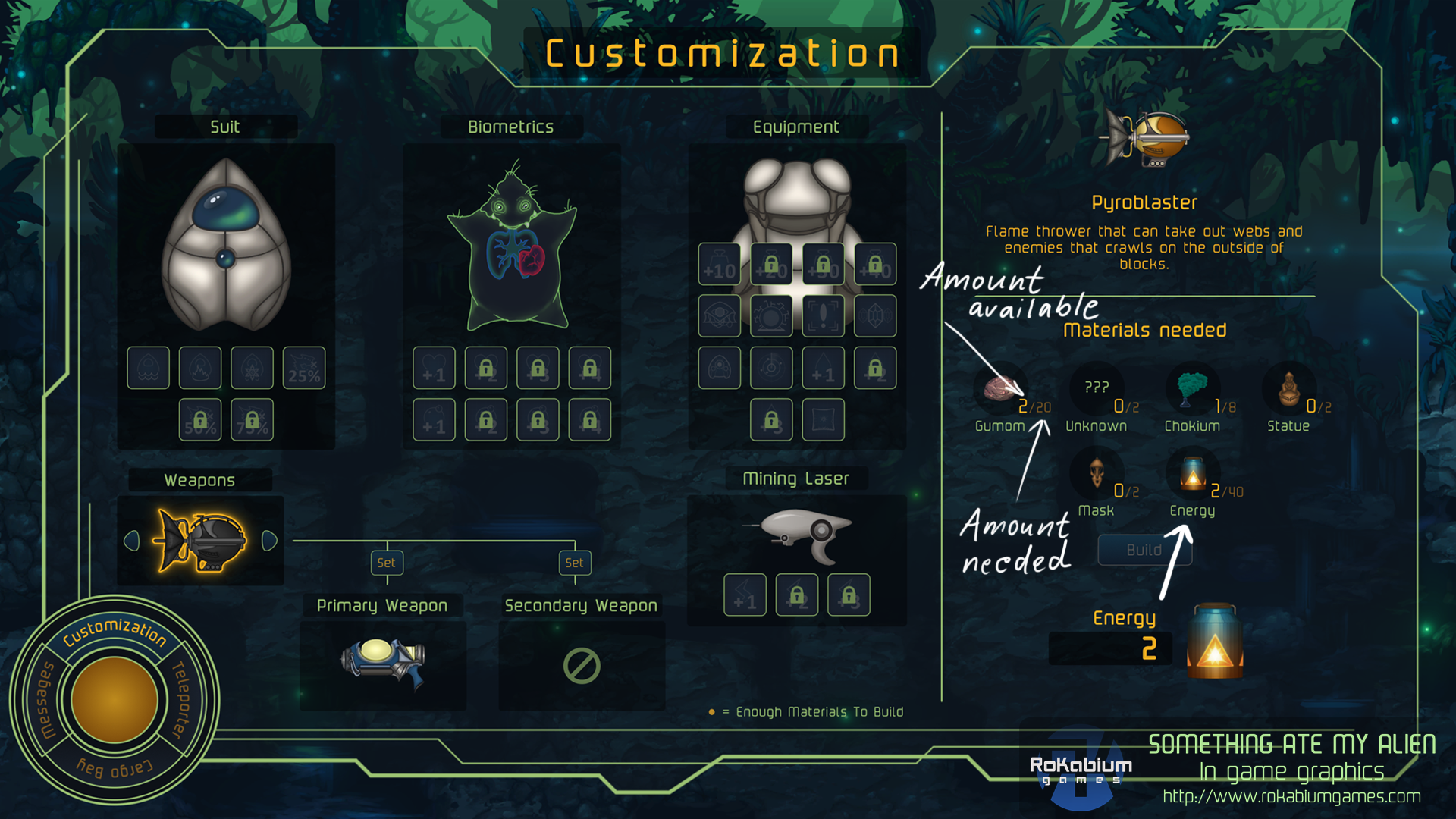 We have done some major work on the GUI part of the game, with the Customization screen getting the bulk of these changes. We have moved around the different upgrade areas and put the weapon selection in a way so the player can view and decide on the weapons independently of setting the Primary and Secondary choices. This solves the issue with players having to manually reset the equipped weapon choice to the one they want after viewing other weapons which was quite frustrating.

The way the numbers are displayed in the materials needed section has now changed to show how many you got and how many are needed so you can compare and choose where to use your items in a more calculated manner. 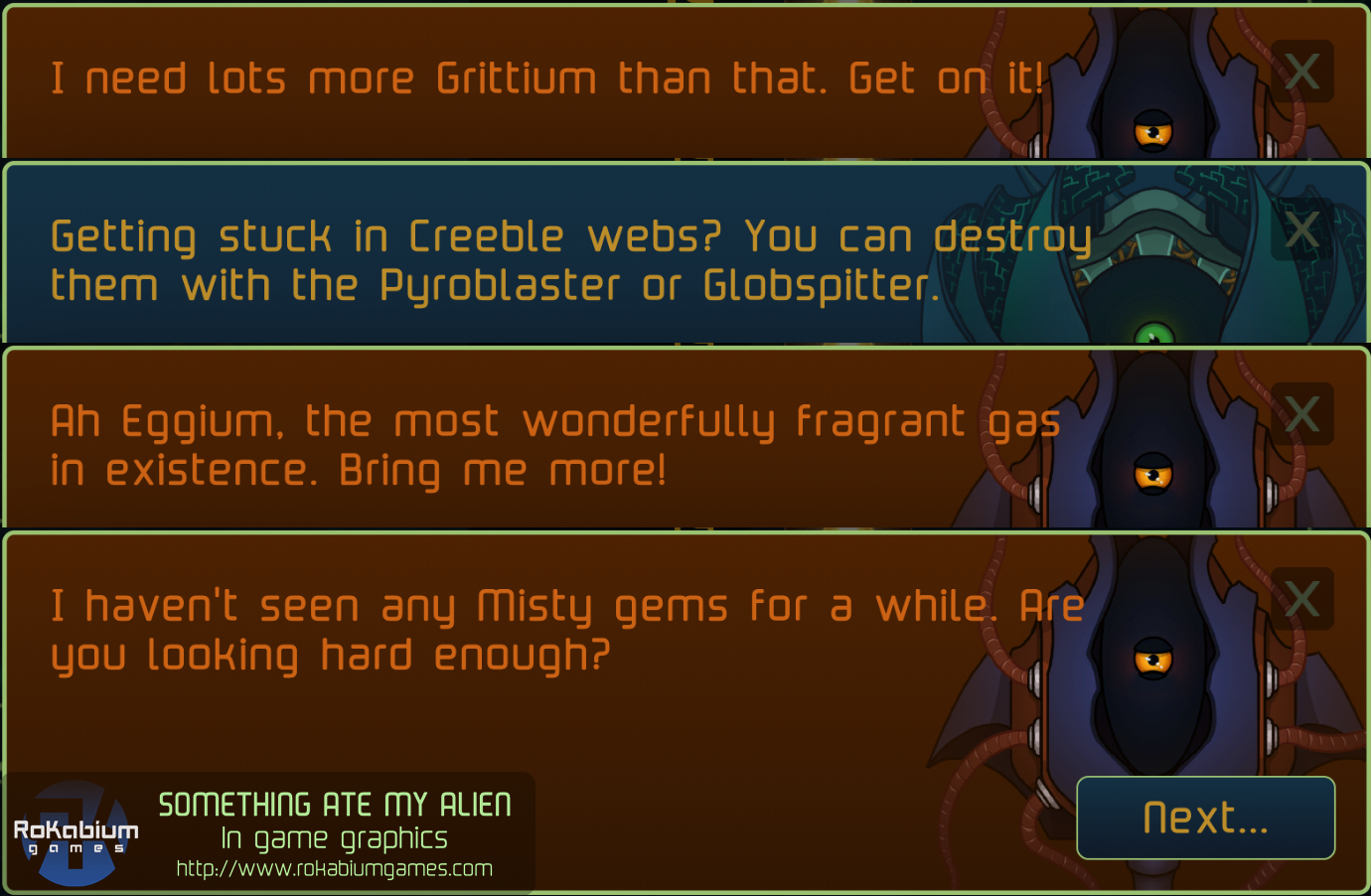 Overall, we have added lots of more sounds both to the levels and animals there, but also to the GUI end cut scenes. We have tweaked and added a bunch more messages popping up from the pirate and Antalasia when the player is teleported back to the ship with (or without) loot to make the player feel more engaged with the protagonists of the story.

We have moved over our game to the Steam platform so new testers now access the game from there. We chose this quite recently to see how that would work for the actual release further on, making us familiar with all those procedures before the live release. 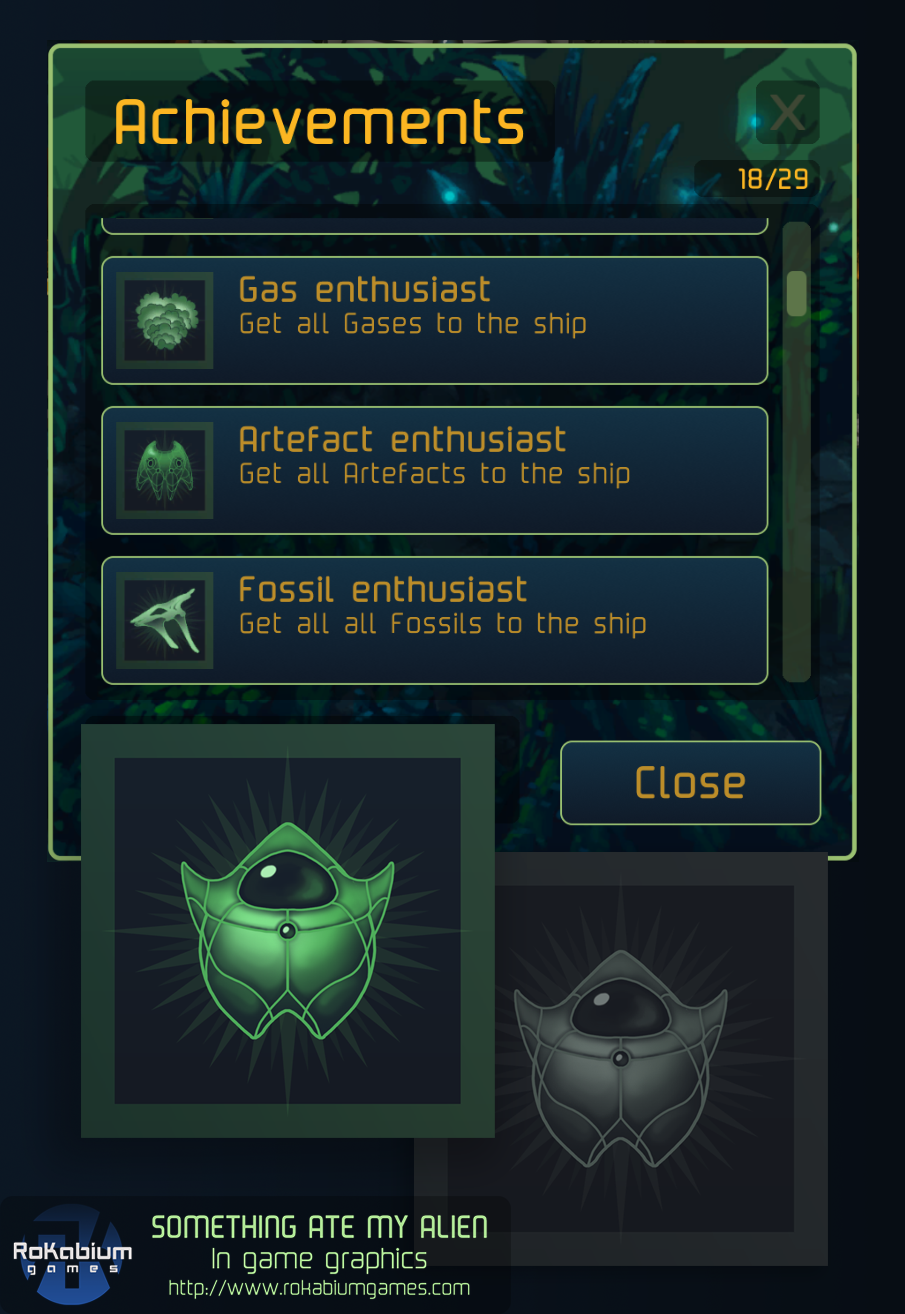 Being on Steam we’ve also been able to add achievements to our game. Not only are achievements good for little rewards as you play the game, but it also creates a competitive part for those players enjoying getting all achievements and seeing their progress both within the game and from the Steam library.

So with a few more months left until “Something Ate My Alien” hits the store front on Steam, we will continue tweaking and testing so the game will be the best it can be.

If you haven’t already, consider adding SAMA to your wish-list on Steam so you don’t miss out once it is released in April: Store.steampowered.com