We've been busy the last month implementing changes suggested from our Alpha testers, and we've decided to extend the release date.

Posted by RoKabiumGames on Aug 4th, 2019

Changes have mostly been around inventory and the pirate list. We realized that the way the pirate ransom list worked was a bit hard to follow and generally was looked at as being a 'grind' rather than fun. So we have changed it so that there are no groups and it's just individual items that are now on the list. This meant we could remove the ransom list screen (no one really went to that screen), and everything is now on the inventory screen. The pirate automatically takes any ransom the player owes him as they teleport back up to the ship. 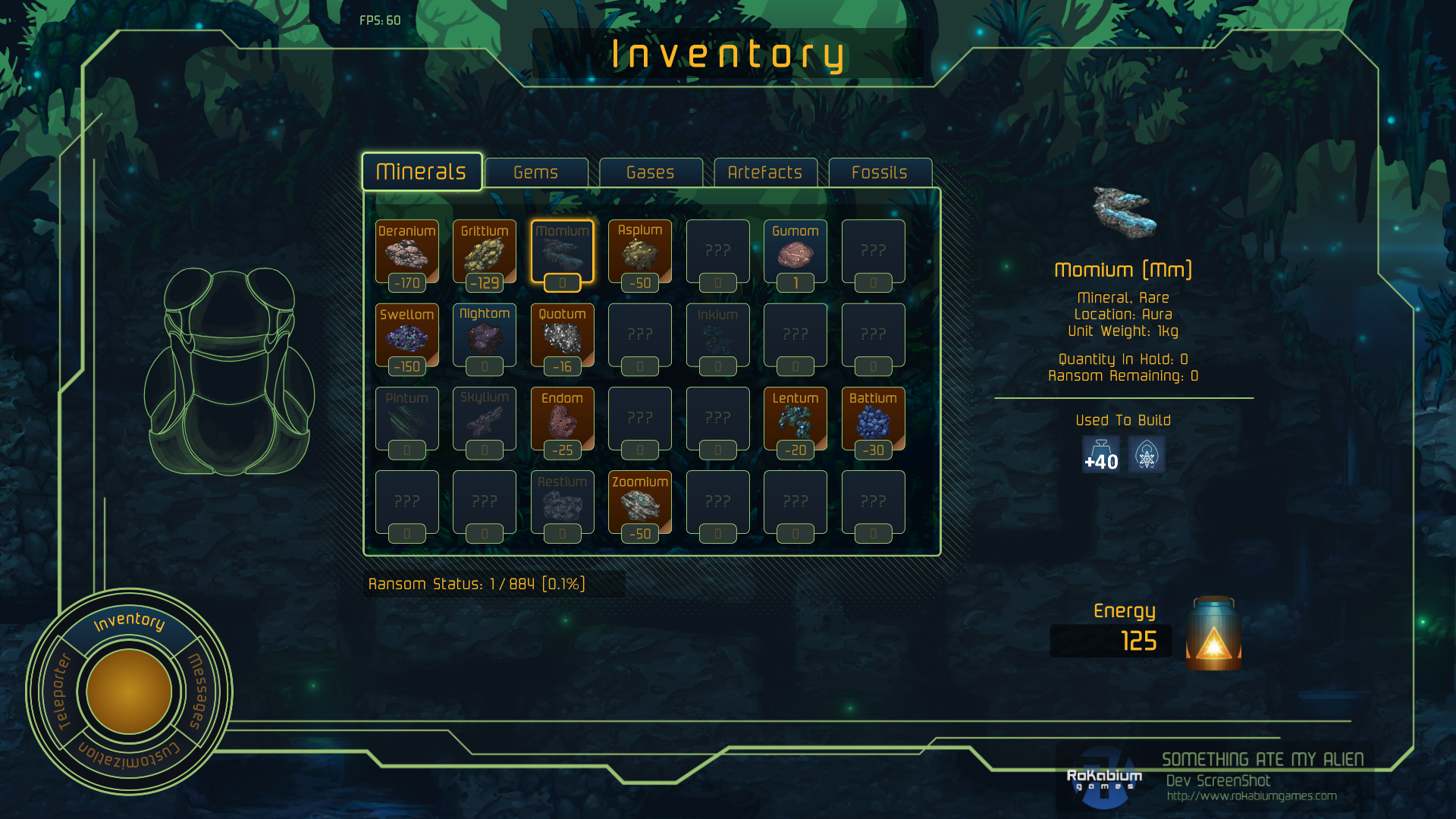 We've also changed how upgrades are acquired. Previously each item had a sell value, and were sold to accrue 'Units'. Upgrades were obtained with Units. Again, this didn't seem rewarding, and people just click-click-clicked to sell everything all the time. So, we've changed it to be a more 'crafting' like process. Items aren't sold any more, instead they are now used to build upgrades. Each upgrade now has a requirement of items (For example, one of the laser upgrades requires: 5 Grittium, 2 Gumom & 1 Hingle Bingle) that the player needs to find before they can build them. Units have been removed, and now each item has an 'Energy' cost along with the item requirements. Energy is found in the worlds in the puzzle chests, and also randomly dropped when enemies are killed. 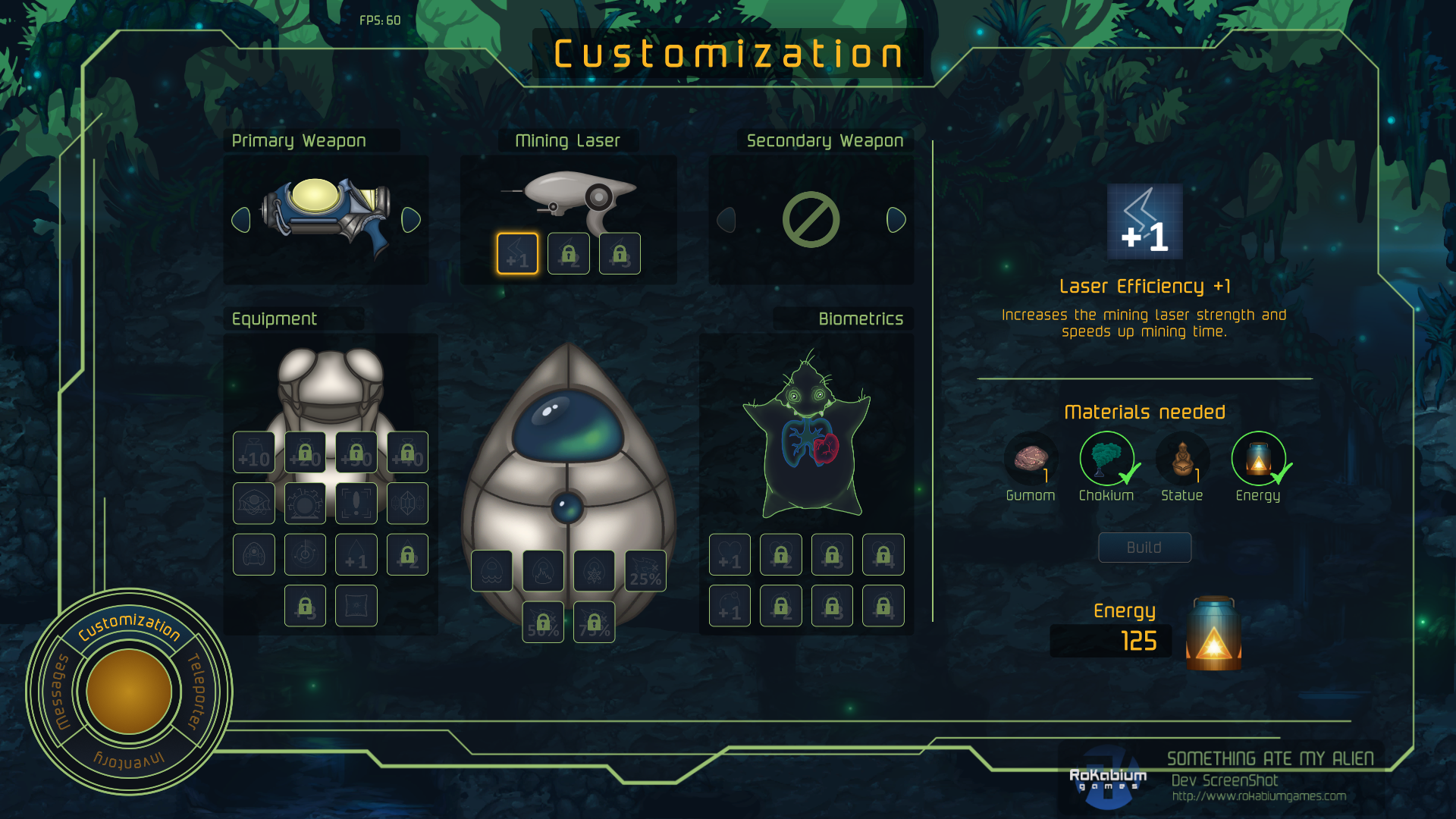 After watching some of the Alpha players uploaded playthrough videos, we saw that they were not understanding some parts of the game or mechanics. We had little message popups to explain things, but they were either just ignored or closed quickly. So we have introduced a 'Tutorial' section (Can be skipped) at the beginning of the game. When a new game is started, the computer AI will talk through the mechanics of the game. The player now gets the chance to actually do the things, in a controlled setting. This way they can directly learn about how to play, what keys do what and how to use items etc. There are 3 main sections to the tutorial, where the player is guided through an easy section at the beginning of the first level. 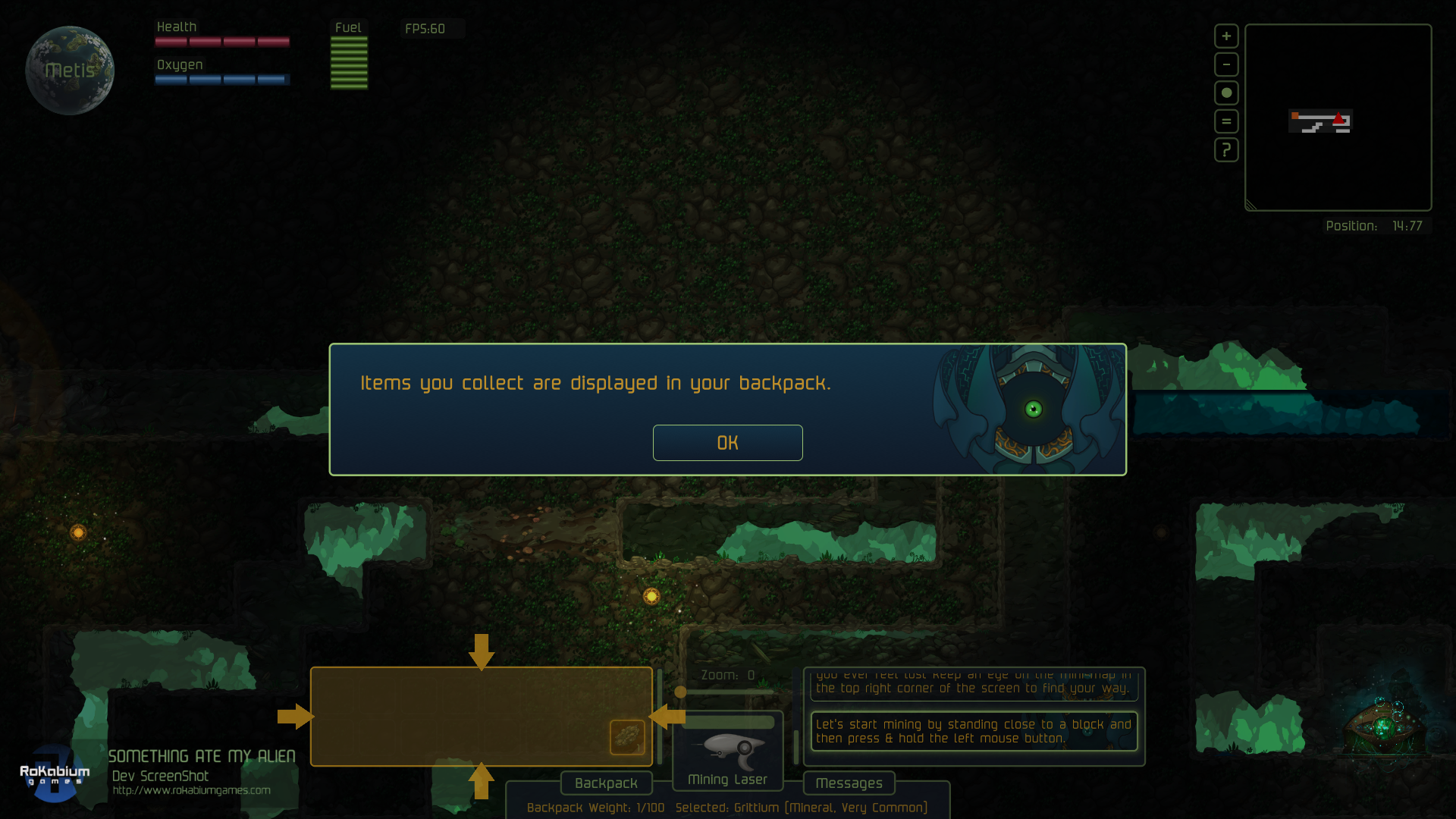 We have also made the game a little bit more 'linear'. We have noticed from watching the play throughs, and also comments back to us, that people were feeling 'lost'. They didn't really have any direction in where to go, especially at the beginning in Metis. So for Metis, we have made it more linear and it follows a more defined 'path'. It's not fully linear, and the player can still mine in any direction and move about freely. It now guides them through the level with more with walls (blocks that can't be mined) etc. This should help the player in the beginning and not overwhelm them with such wide open areas. The other levels have not changed too much in this regard. Tartarus and Lelantos were previously more guided than Metis anyway, and Aura is still a lot more 'open'.
Hopefully this will start the player off on a more direct path and help them understand the game better. 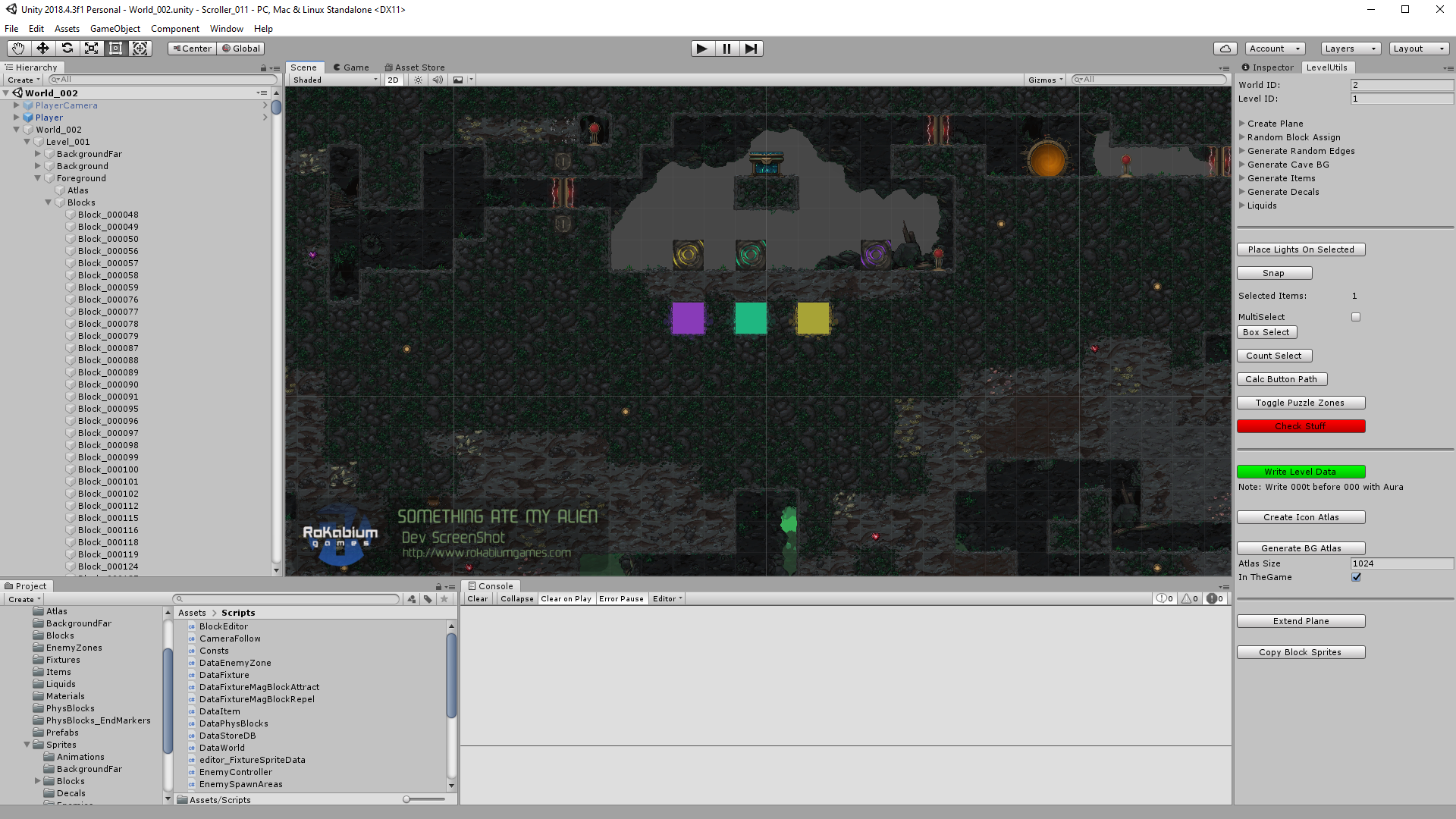 The minimap has had a bit of an upgrade. Along with other Upgrades you can build, there is now an 'Item' scanner. This upgrade allows the minimap to show up to 3 different items, so they can be found easier. It only shows them in areas that have already been seen, but it should help in finding specific items needed for other upgrades. A new button to stop the map following the player helps with navigation. Regarding upgrades, there is also a new scanner for graves, another suit protection for cold, and an extra level for the Lock Jaw device. 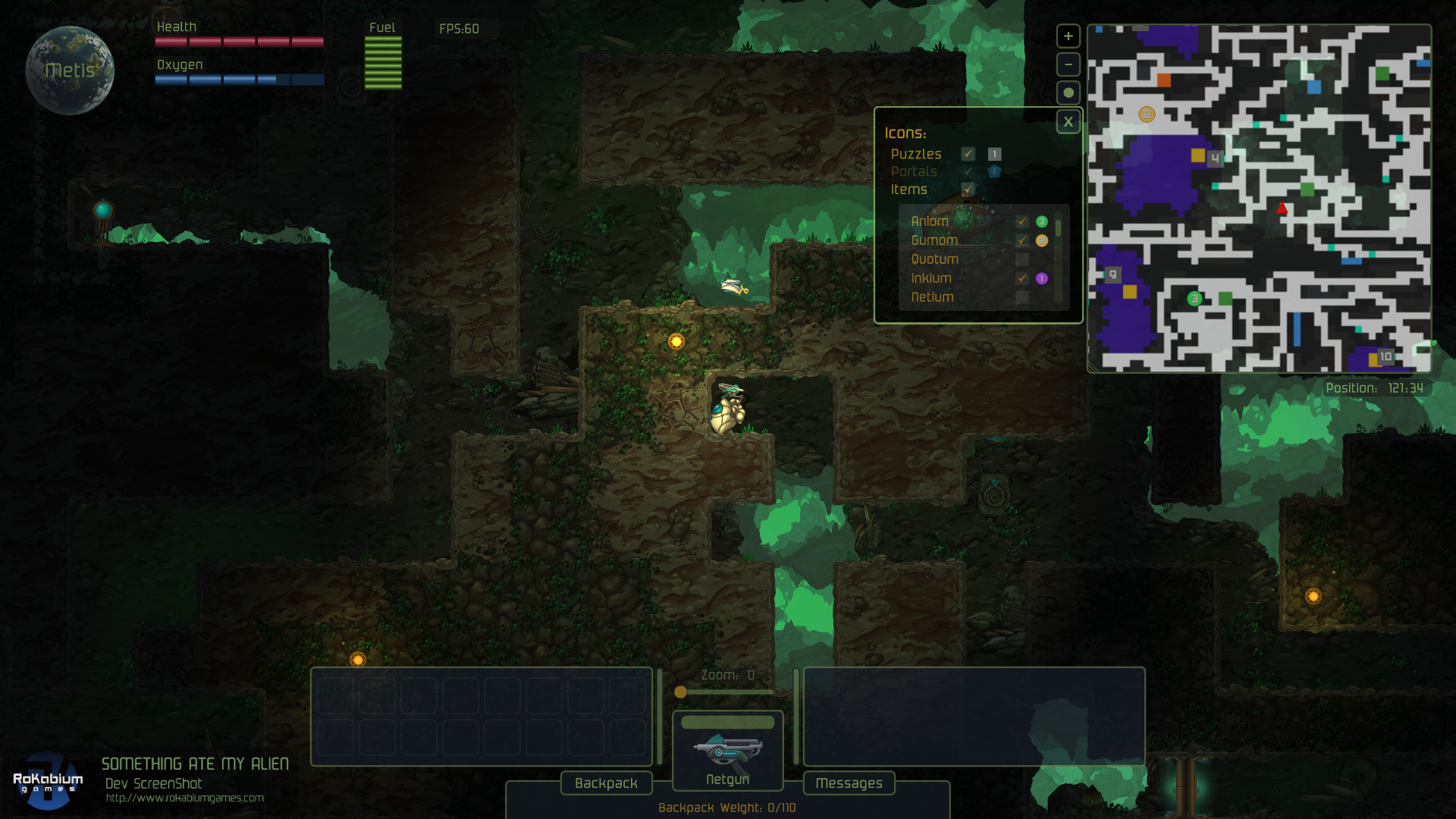 So, that was a lot of work in the last month!

We still have lots to do. We want to enhance the enemies AI, enhance and polish the boss scenes and add Steam Achievements. Some other things we are looking at are full controller support, Linux & Mac support and the possibility of localization in other languages.

We had touted that our release date would be Autumn 2019. That would be possible, but we would have to drop quite a few things to get that done. Also, we have been working close to 100 hrs a week for far too long and that has taken a toll on our productivity and life. So we have made the decision to delay the release a bit. Ideally we would probably only need to extend by 2-3 months, but that puts us near Christmas and the winter sales. Generally this seems to be the time when small Indie developers should avoid releasing their games. So, we have to push it out to early 2020.

We feel this is the most ideal solution for making our game the best it can be for our players. We would like the final part of the game to be finished how we want it to be rather than rushing to complete it and it not being the game we hoped for.

We're also still busy trying to grow our community and Steam Wishlist. Click the link below to go and add our game to your Wishlist or see some more screen shots and our trailer video.

Hopefully all the above will mean we will release a fun and complete game, and we still have fun finishing it :)