Developing an alien ship that utilizes design techniques seldom (if ever) used before is a daunting task. We think we've found something that works: Alien ships that are based off rock, held together by nano-machine vines that feed energy. Human ships, on the other hand, seem to be valuable if they're compartmentalized and modular. We've got two entirely different methods for spaceships here and that works wonderfully.

It's been a little while since our last update, I know. We've gone through some pretty rough weather here in the Seattle area and it's slowed down everything for everyone. But... production is ramping back up and we're looking to get back on track to having our free demo for you all later this year!

We've been working on a number of things, but at the forefront has been spaceship design. Before you get antsy, we won't be covering the player ship in this post, but instead, we'll be talking about alien ships and human ships that make up the rest of the game.

Human ships are always an interesting subject to go through the design process for. One one hand, they're easy to relate to because they use human technology. Though spaceships that can travel to interstellar distances are way ahead of our time, the design technique needs to hold familiarity to today's standard, while still looking new, advanced, but industrial all the same.

Thanks to Travis, our wonderful concept artist, we've been able to start fleshing out some design concept for our human ships. There are two rather large ships in the design phase right now. First, we have the Civilian Ships to go through. At first, it's always good to get a good block out of the silhouette of the ships you're designing. This ensures that, from a distance, the design will be unique and interesting and you'll be able to set it apart from other assets solely due to it's outline. This is extremely important for character design. In our game, the characters are the ships. We want to make sure the everything reads will from any distance, since you'll be far away from ships and up close to ships alike. So, Travis gave a few silhouette sketches for the team to fight over: 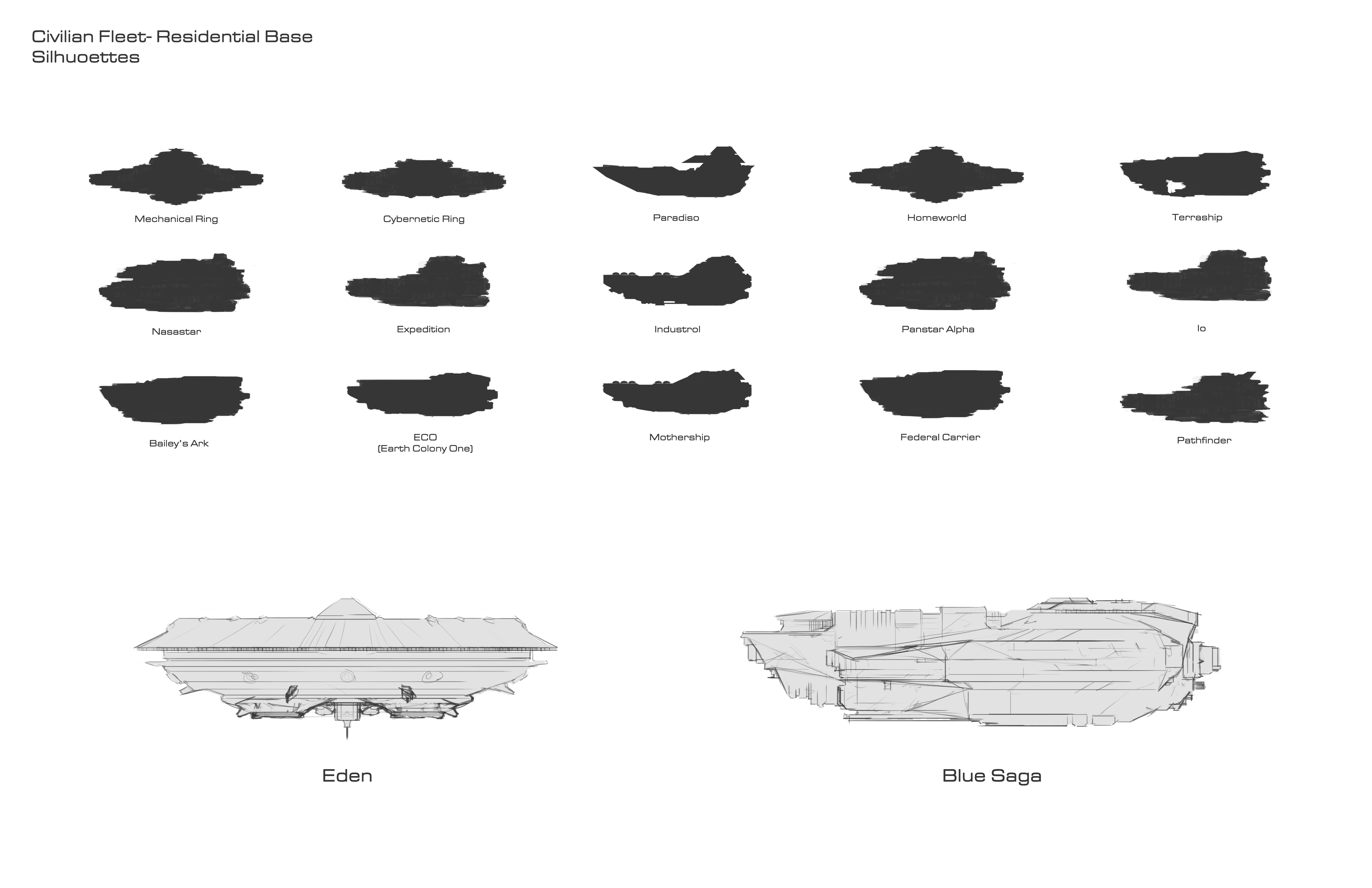 We debated for a bit about which one we liked the most, but after some deliberation, we came to a conclusion which started the furthering of detailing the silhouette: 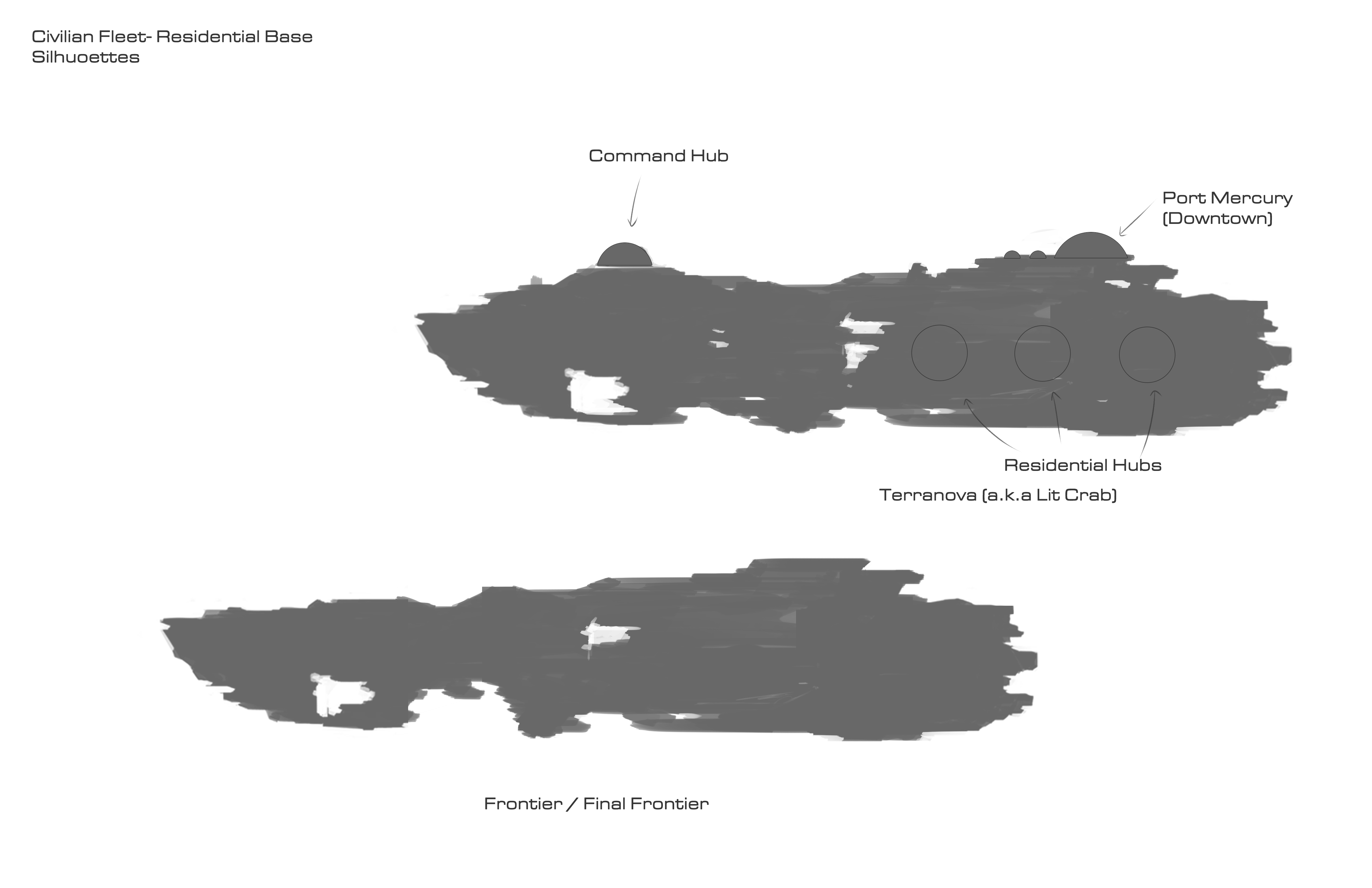 After getting feedback from the team, Travis moved on to some orthographic views for our modelers to begin construction. This is a critical feedback stage as well, as we want to ensure all views are reading well for their purposes. Travis' concept for that began here: 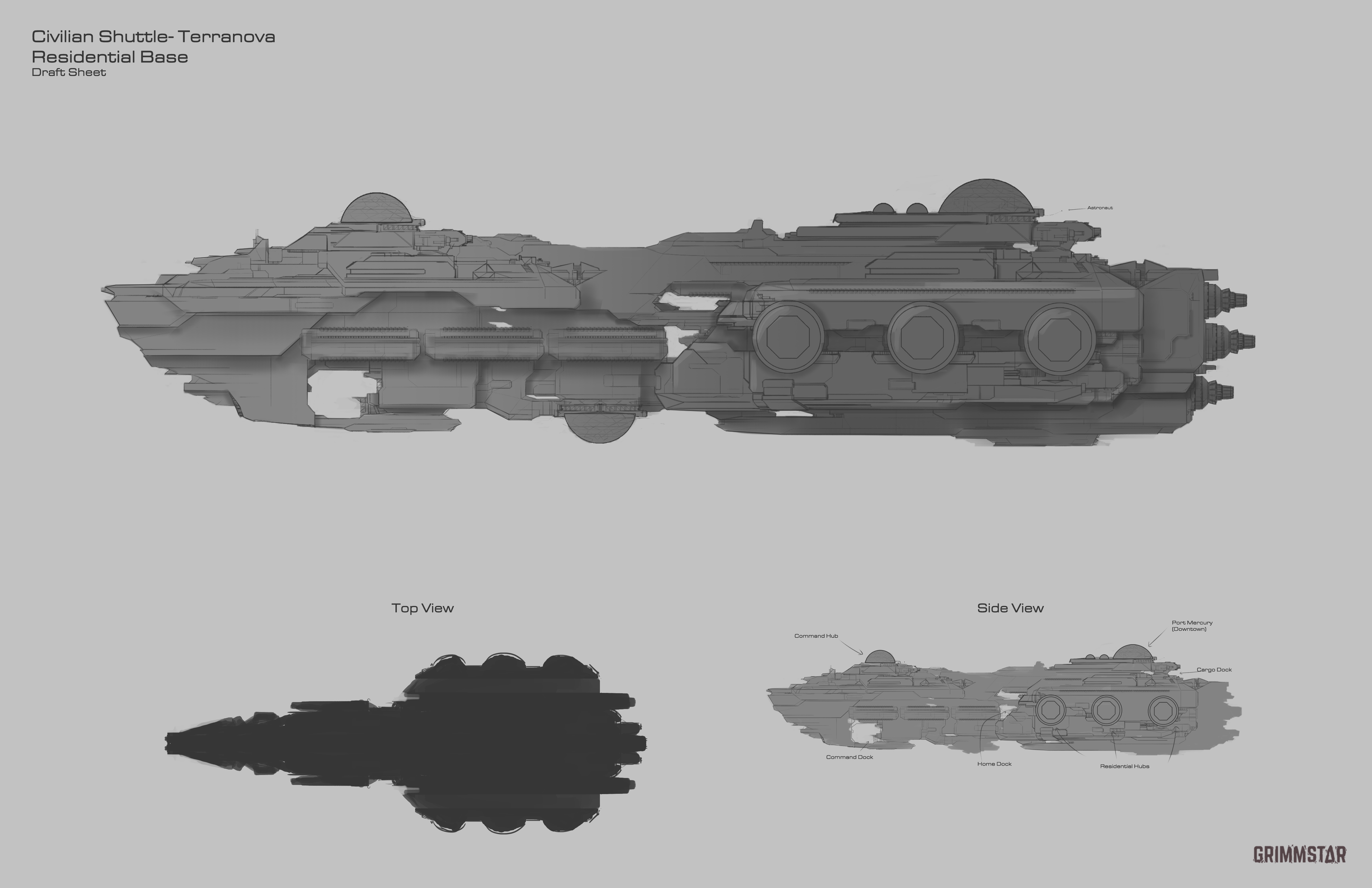 From here, the team gave feedback in a few key areas to ensure consistency of design and proper weight and space of the overall silhouette. After the feedback, Travis came out with this beauty: 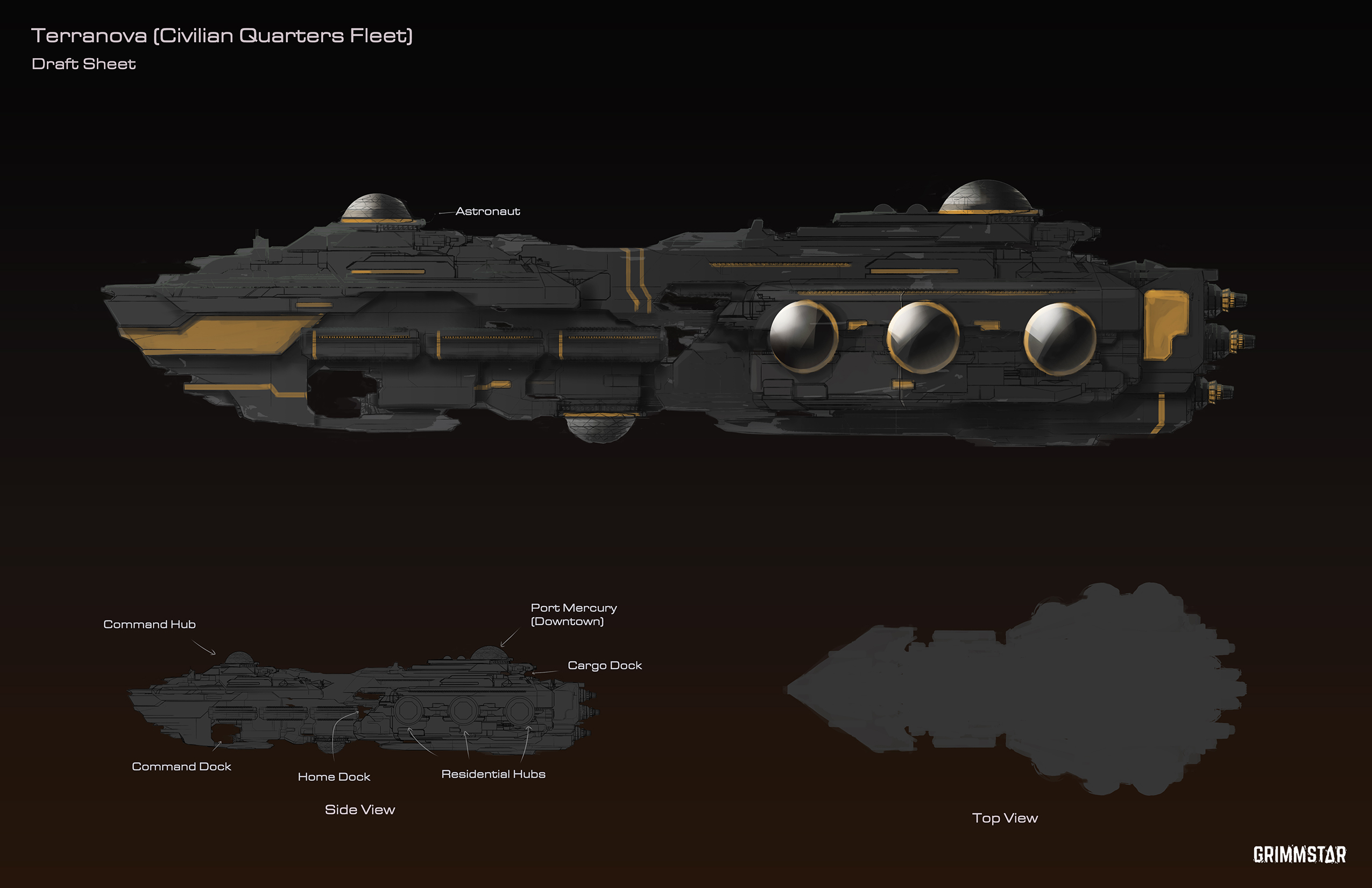 Take a minute to notice some of the key differences. Mainly, the top view shows a thicker front end for the ship, which we thought would really help sell the idea of a massive city-on-a-ship look. During this process, Travis also began identifying the key areas of the ship. This helps us keep design in mind for different sections to add some variety and better sell the size and multi-functional role.

Right now, Anthony is working on blocking out the basic shapes in 3D space. We'll be posting updates as development for this ship continues.

Also important for human ships is military vessels. Our game is a space fighting game with fleet management, so this is a huge emphasis for us to ensure we get these designs done right.

Our art style utilizes some of the big, bulky wartime ships of the past, along with an industrial low-fi sci-fi look. Combine this with the modular functionality of future time spacecraft and we get something like this: 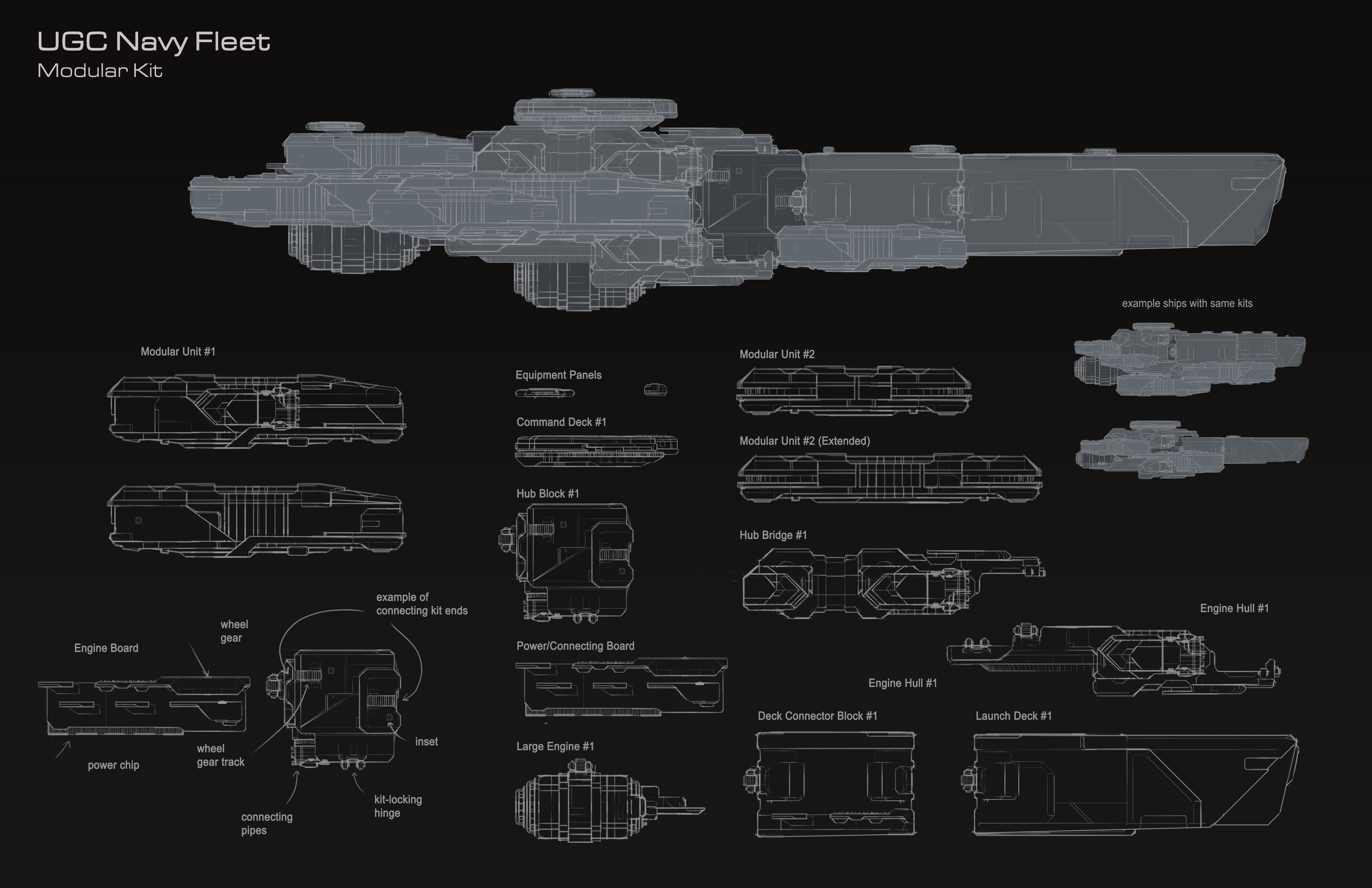 Travis' design for our fleet is based around the concept of mass manufacturing individual kits for making up the majority of every different type of larger ship you'll see from the UGC Fleet in our game. He's paid very close attention the function of each part and will begin modeling out the ship itself shortly.

Our game revolves around Grimmstar, the ship that the game is named after. Grimmstar is massive. Like... it's enormous. It eats planets for breakfast (quite literally). The Grimmstar and its fleet are powered by Hawking Radiation that is expelled from the controlled black holes kept inside each ship. These black holes need consistent intakes of enormous quantities of mass and the Grimmstar has perfected the process of devouring massive objects in a large scale. This quick devouring serves another purpose though: it becomes a manufacturing process for ships.

Our alien ships are made of rock taken from the massive planets that have been eaten by the Grimmstar. There are biomechanical "tentacles" that hold the pieces together to create a ship with rock armor designed to take quite a beating.

If you've played our PAX demo from our website, you may have noticed some of these designs. Well, all of the enemy ships are being completely reworked because we're not happy at all with the output of them. The first ship that was concepted for the Grimmstar's forces was what we call the Enemy Seeder. This ship deploys out smaller ships that swarm and attack in large numbers: 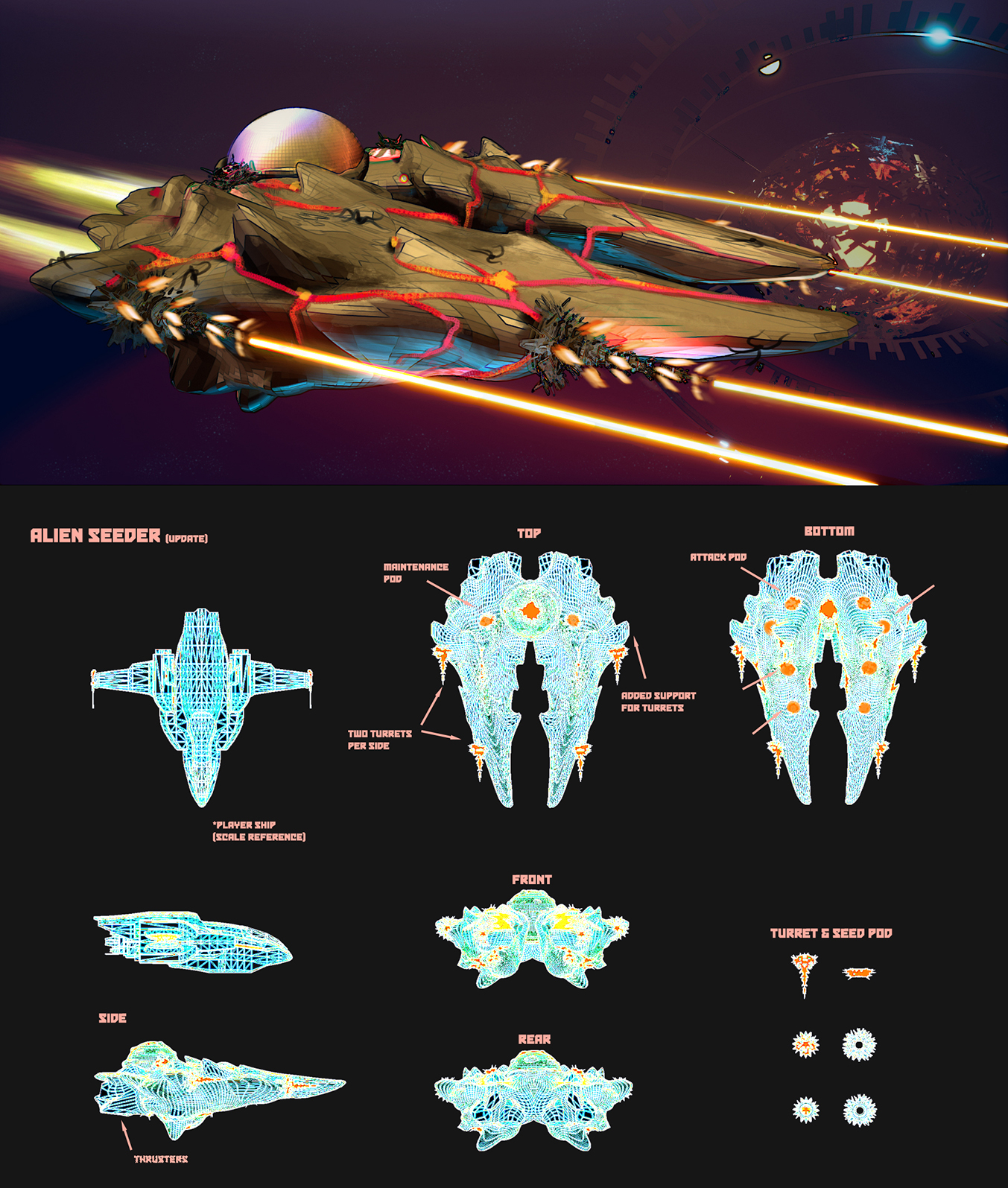 This ship has been around the longest and therefore gotten the furthers in development. It started with a basic blockout from Travis and then Alex began the high poly sculpt. The process is outlined here: 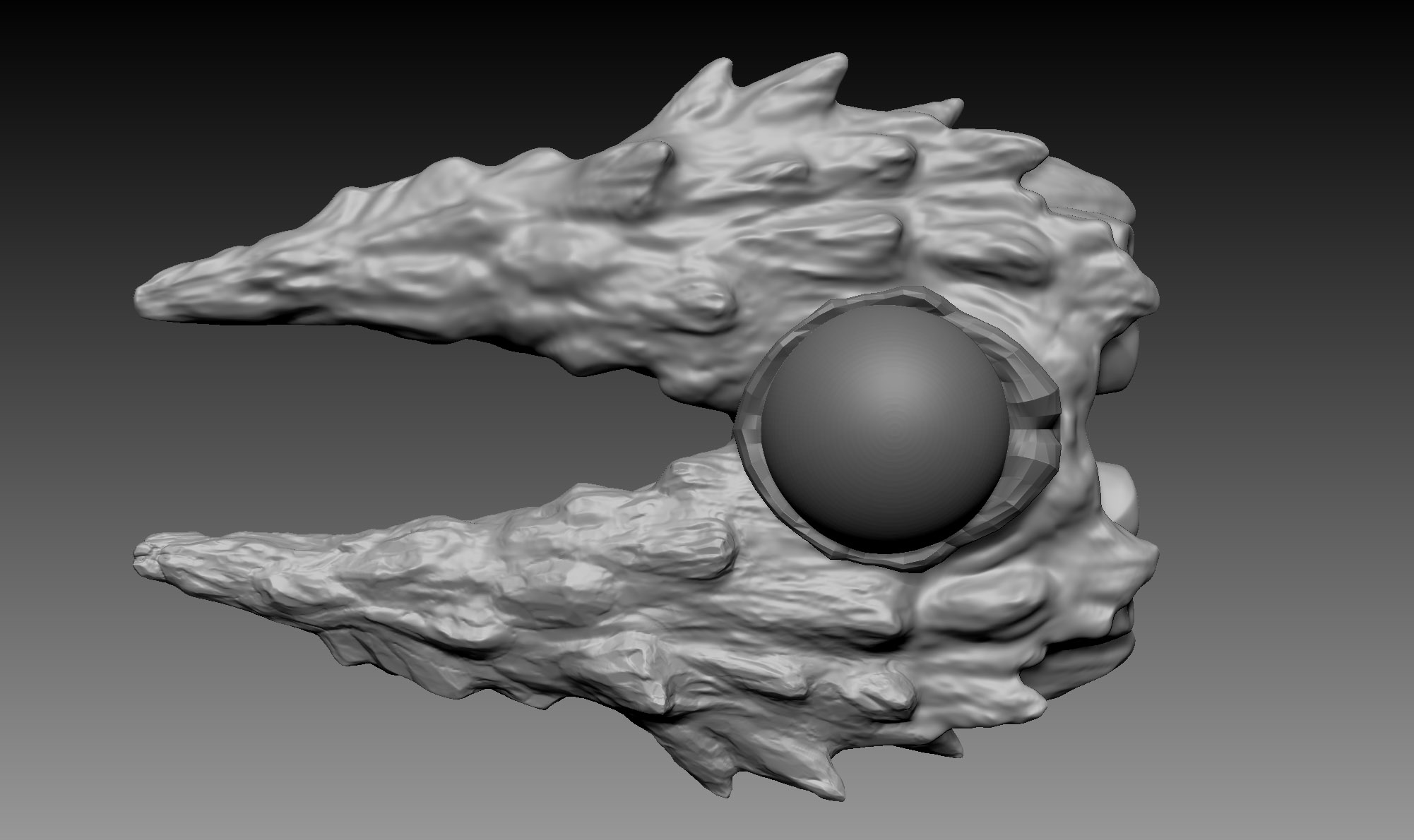 Working out the basic shapes for the details came first. 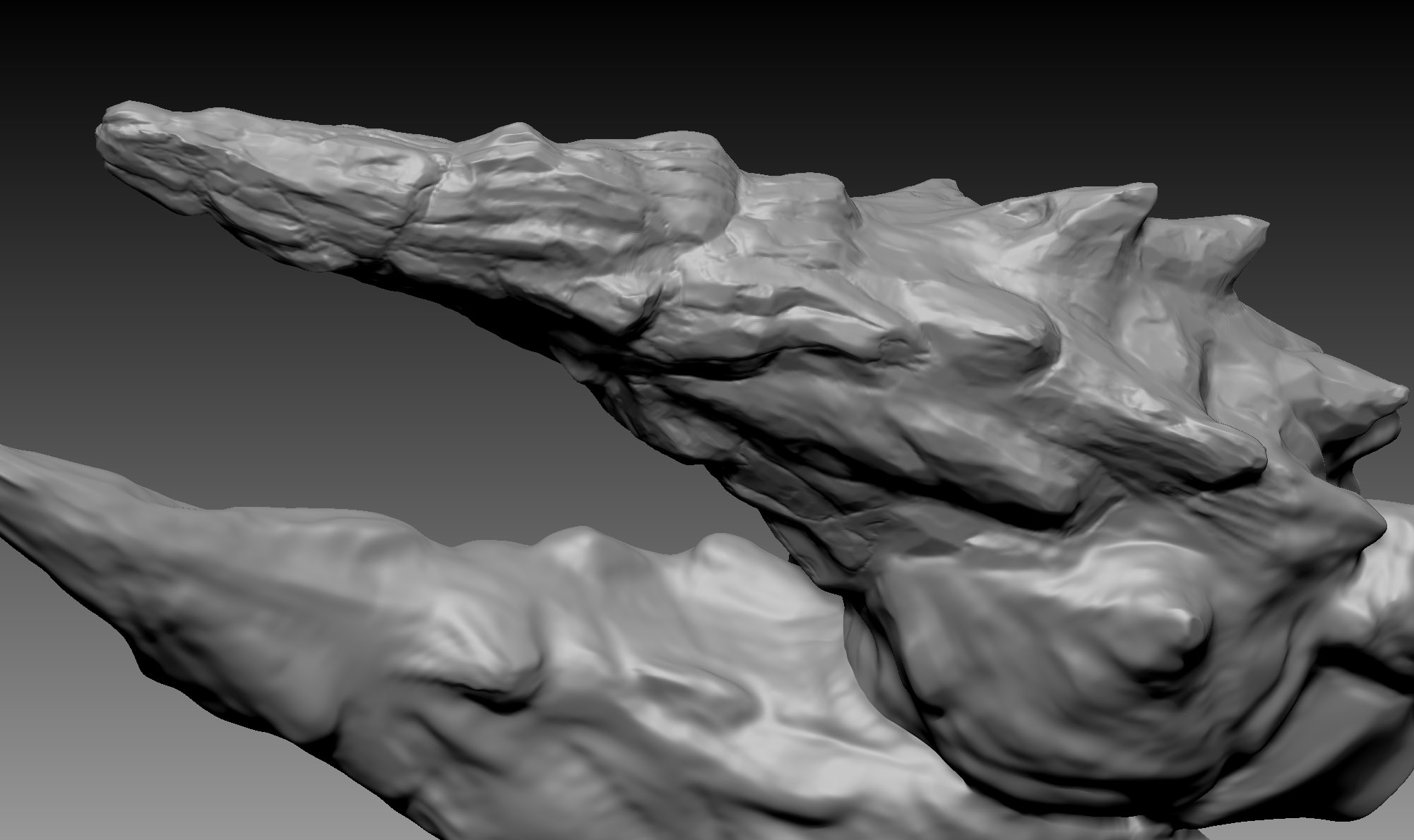 As Alex progressed, more and more detail was layered on. It was also a good time for him to learn some new techniques for mimicking the surface of a rock-like material in Zbrush. 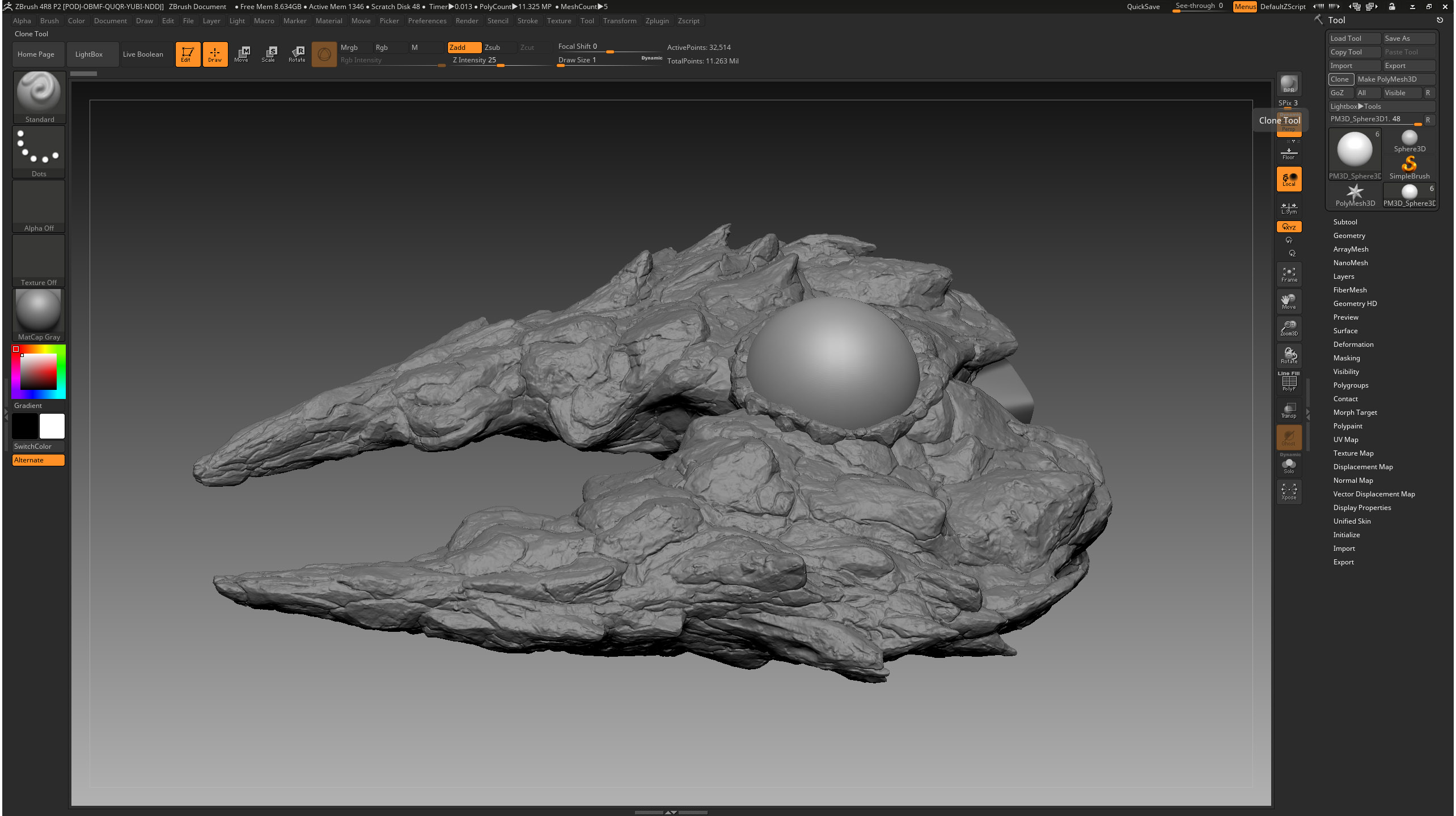 As things began to realize their form, Alex had to make some engine thrusters: 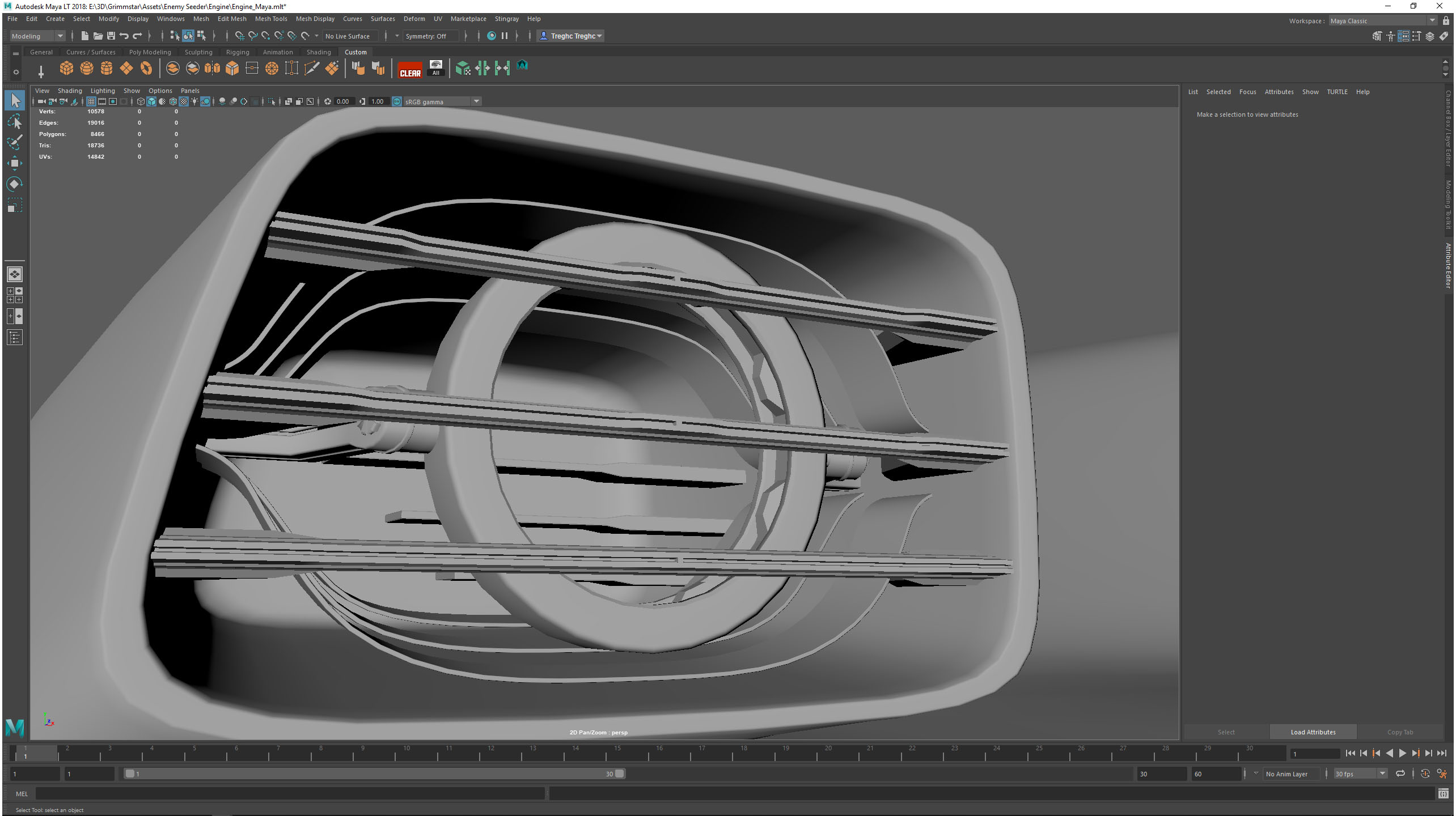 These were then placed in to the Seeder ship: 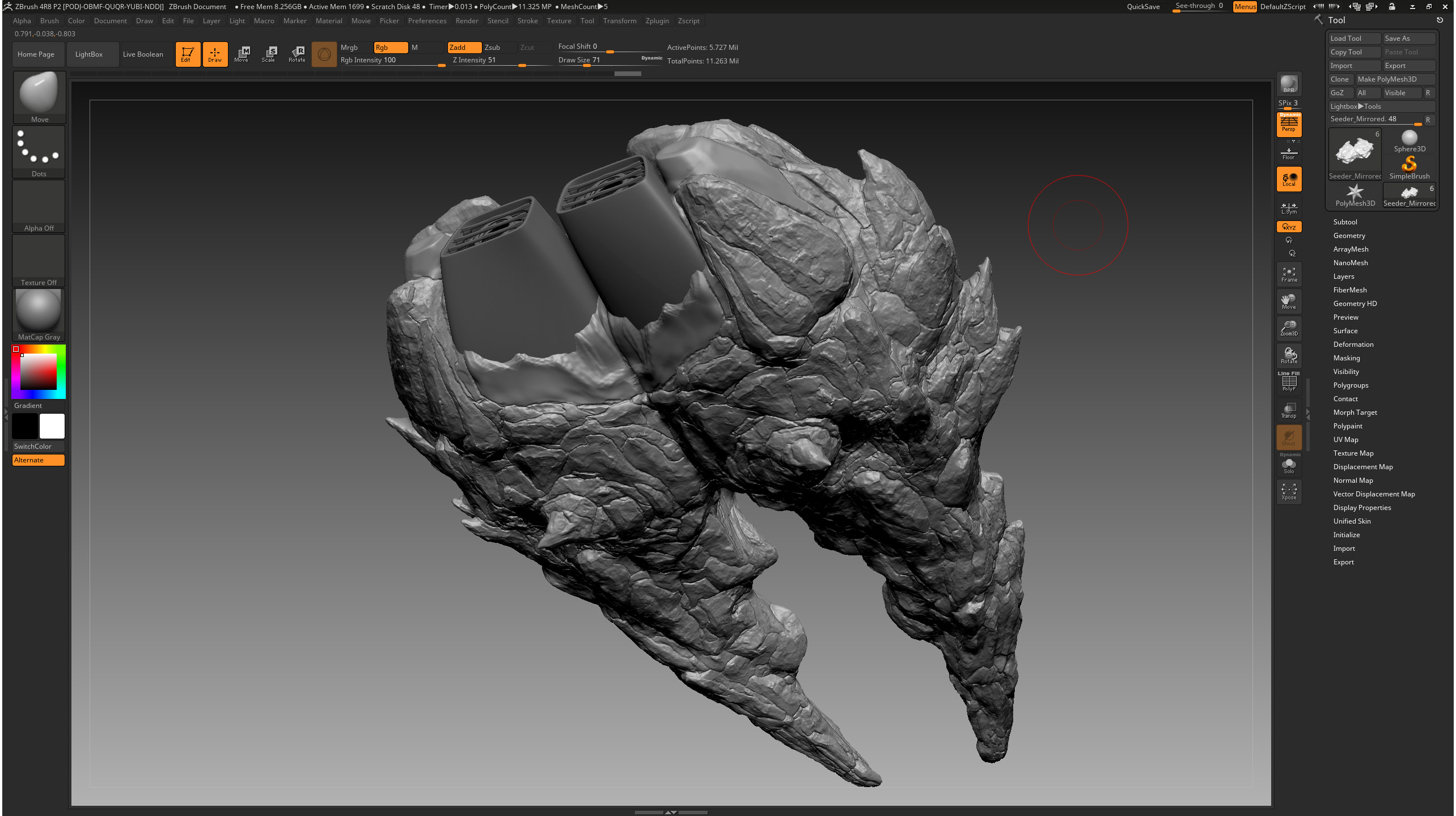 There's still work to be done to make a convincing transition from rock to metal shapes, as you can tell, but the high poly sculpt is nearing completion. Once done, the mesh will be decimated to a low poly version and then UV'd and materials will be developed and used with baking information before the ship is put in game. Once in game, particles and lights will have to be added (especially to the thrusters) to help bring the ship to life.

Then, we're on to developing the Swarmer ships that come out of the Seeder: 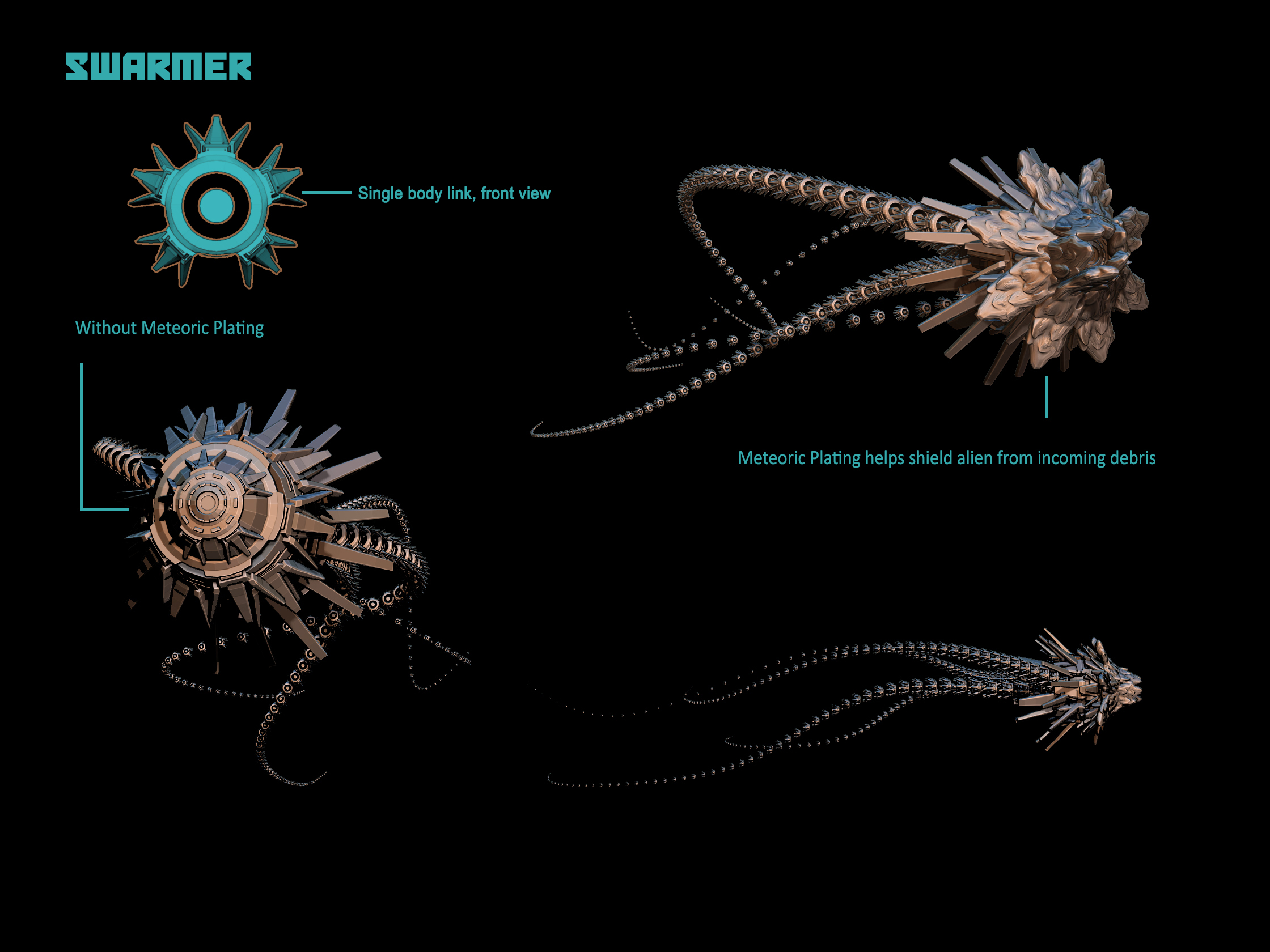 Also beginning development is the enemy Rammer. This ship is being worked on by Brayton and we'll likely be showing it off in a future devlog video for everyone to see the process in pictures that move. For the time being, here's a silhouette sheet of the Rammer (we don't want to give away too much just yet): 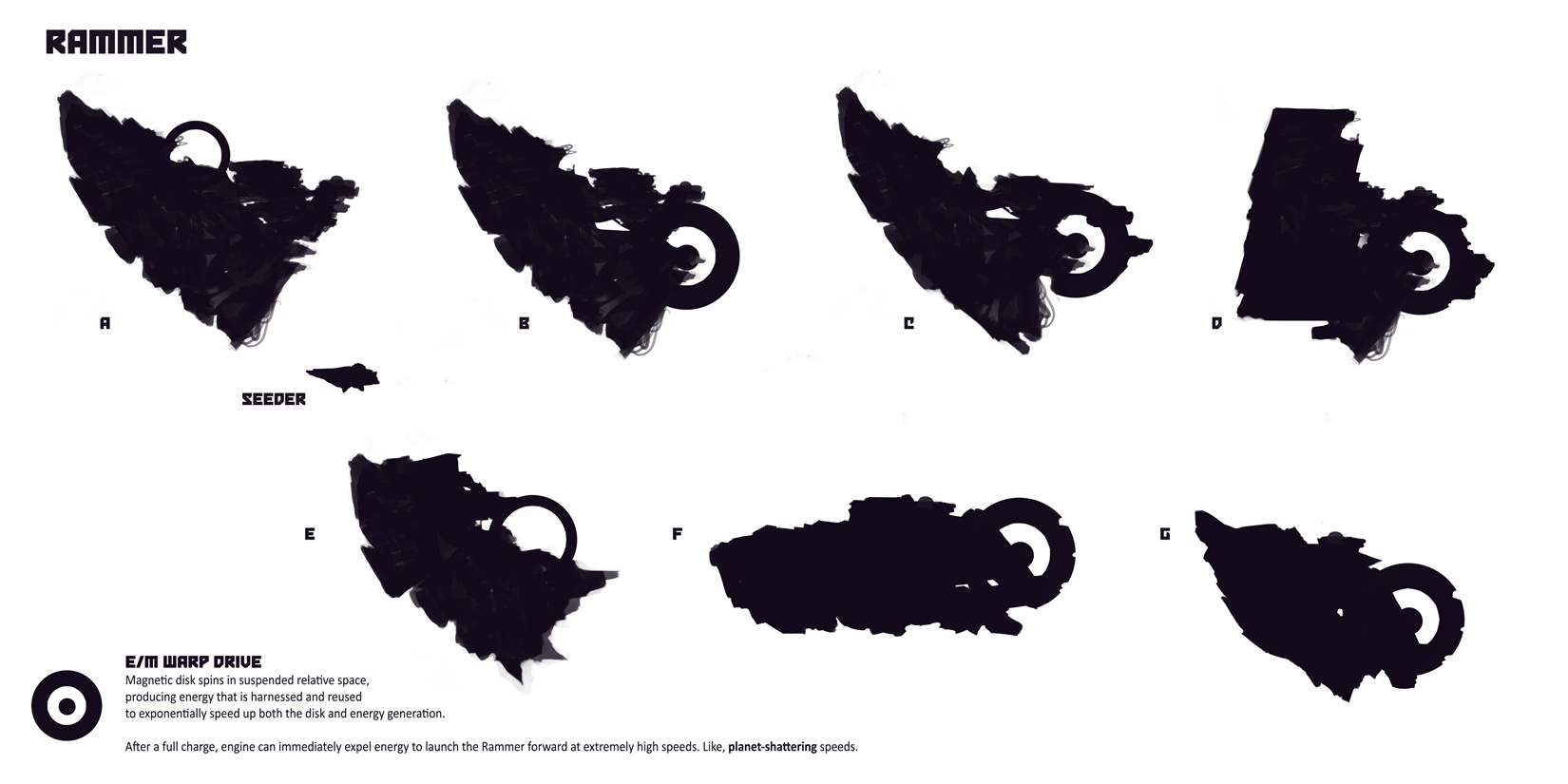 We'll be posting more about our ship progress as time goes on, of course. Some things, we'll be keeping behind doors for some of our upcoming videos. If you haven't checked it out yet, our YouTube channel has a couple of videos to check out about some of the processes of developing our game.

We're excited to get the ball rolling with these new ships! Can't wait to show you what they look like in game. It's an entirely new learning process for a couple of us, as we're implementing new techniques that we have yet to utilize in games, but we're hoping that these modeling techniques will actually save us time while giving better performance and much, much better visuals.

Thanks for reading about our latest updates! Let us know if there's anything you'd like to see in particular.