Hello. My name is Tom, and I’ve been narrative designer-ing The Swapper on and off for the last eleven months. When I’ve not been doing that I’ve been making things like FTL and Ir/rational Investigator, studying philosophy, and lending a hand with other word-like tasks, the latter of which brings me here.

Today I’m being brought to you with my narrative designer’s hat on. That’s going to prove necessary, because somehow I have to explain to you all that’s happened to The Swapper’s narrative over the last eleven months, without actually giving any of it away (and it’s very much that sort of game, you know). I have to try to explain the thought that went into decisions like silent protagonist and the general goals of the writing, without actually explaining exactly what happens. Wish me luck.

We should start where my first writing tutor assured me you should always start – at the beginning. Olli contacted me May last year. He’d played Penumbra, and needed some help with a ’2001: A Space Odyssey meets atmospheric puzzle solving’ game. He had a synopsis of the basic story structure, but was open to new ideas. It was to be a few weeks’ work on a minimalist, text-only 3,000-word script. 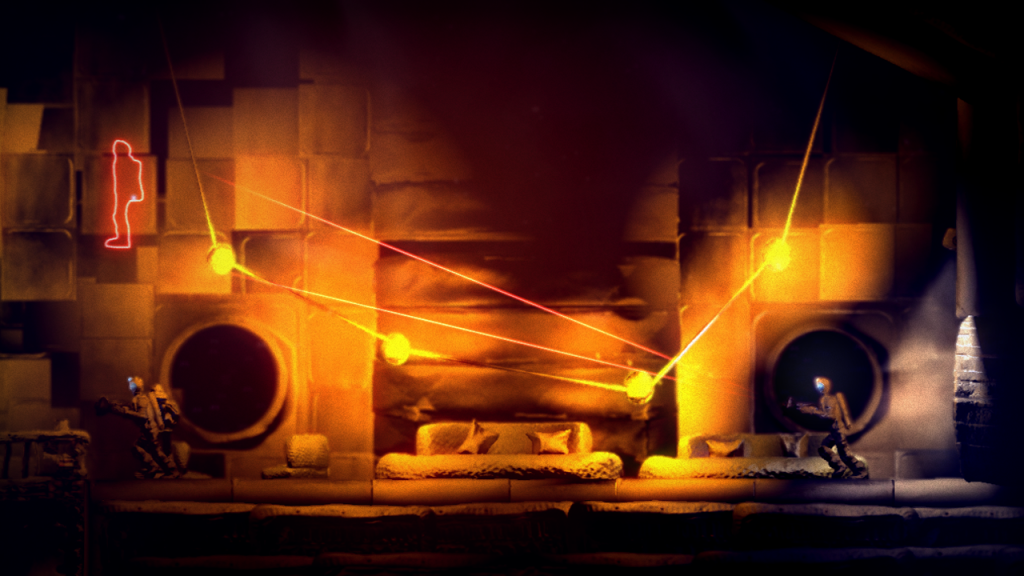 Eleven months later it’s fair to say that while the script has expanded only a little (we’re at around 5,000 words as we hit text lock) the workload has ballooned. Thanks partly to an extensive post-IGF plot revision and constant on the fly iteration, I’ve spent around 8 full-time weeks on the game in total. Here’s the breakdown:

Discounting the week or so we killed by overhauling the plot it’s still fair to say I’ve spent more hours per word on this game than any other. That’s exactly what excited me about the project in the first place – with such a minimal script, and the convenience of playtesting the game, there’s no excuse for every word not being precisely where it should be. I hope the attention we’ve paid them pays off in the end.

So just what have we been working on? Here I’ll briefly discuss the direction the gameplay imposed on the narrative, and in the next post I’ll go into more detail on how that informed the various changes we made.

The Swapper as the ‘Controlling Idea’

Starting work on any game with a relatively open narrative landscape is a different task to writing a novel, or a play, or just about anything else, in so far as the gameplay provides and imposes unique restrictions on what it makes sense to do with the story. The Controlling Idea is the core concept that moves the entire narrative. 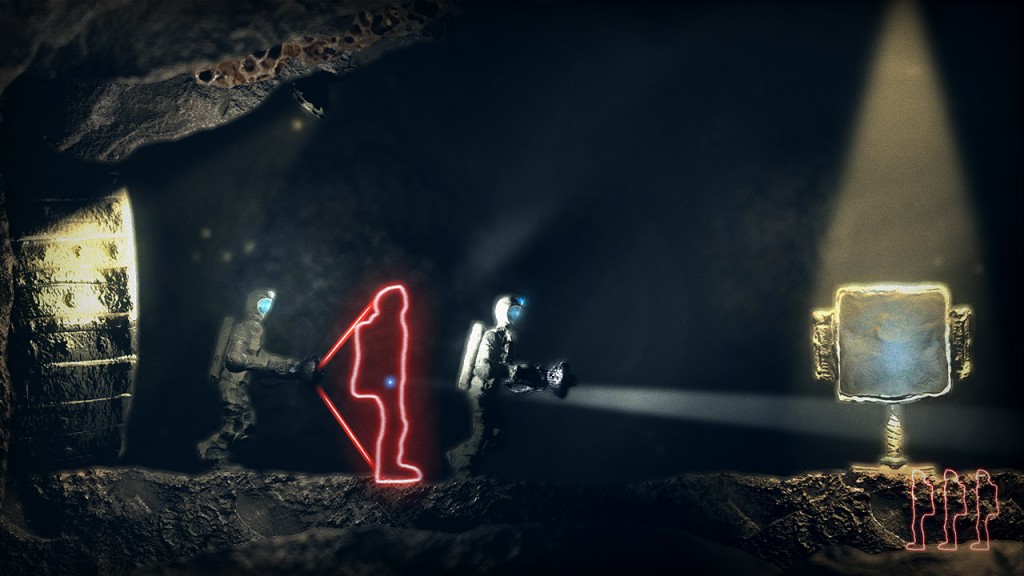 The story in The Swapper could only ever have been about one thing. What the titular device actually does, and what it means for us. When I came onboard the focus was on the cloning aspect; we kinda know where that goes. As we developed ideas about how the device could be used in the key story beats it became clear that the really interesting thing wasn’t so much the cloning as it was the transferring of consciousness around different bodies.

What exactly is consciousness? Is there something like a soul that we can actually identify separately from the physical machinations of the brain itself? What constitutes what it is to be you?

These questions will sound pretentious to some, but they are the focus of cutting edge scientific and philosophical research into the brain, and remain more or less open to well-reasoned discussion. While it’s true – as my non-gamer flatmate likes to point out to me – that I’ve learnt a lot more about these subjects from essays than I’ll be able to raise in the game, it’s my cautious hope that it won’t defeat the point of putting them in there. A game in which you screw with your brain but aren’t encouraged to think about it would seem to have a thematic gap between its gameplay and its story.

This commitment underpins everything that occurs in the narrative. These are difficult questions to answer, and what you think about them will depend on your intuitions more likely than not. Every move you make in The Swapper we hope will give you pause to question them.

Next time: non-spoilerific details on some of those questions, and what we think their answers might be.

That sounds very very interesting and promising to me. I also think that the term "consciousness" is one of the great mysteries and unresolved questions of mankind out there, much more than any myth or some abandoned sunken city in the ocean. You can learn all the things about consciousness in your own life, but you never get a answer that fits right. To understand consciousness you have to be conscious for yourself. I love philosophical discussions and subjects. Can't wait to see more of the Swapper! Is consciousness, maybe, not a single thing but a whole of many? Something that only awaits to break it's own rules, restrictions and chains? Who knows?