BAM! Another easy win that leaves you feeling like the enemies are potato head bumbling buffoons? Fear not! There is a cure! In today’s Design Table we will take on enemy design.

At the core of the issue is a philosophical question: what makes a good enemy in a game? My answer would be that it depends on the rule set. As the rules create the base for player design, it also sets the framework for the enemy design. I like to divide them up into three main enemy types. 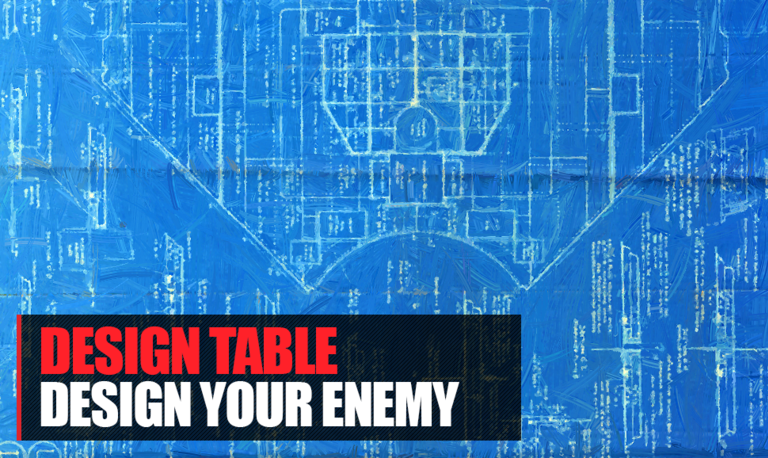 The least “sophisticated” of enemy types, bots are very common in the fauna of scripted AI. These are usually programmed to mimic human gameplay behavior, but common for them all is that they use the same rule set as any player would. They inhabit the game universe and are usually easily scalable in challenge by a simple multiplication of their numbers much like an army. Usually requiring a low to medium investment in coding time, with effort, they can be given higher level of responsiveness and awareness, though usually it is not required as bots are commonly cannon fodder. Perfect for tutorials, farming, and other similar design formats.

Let us make no secret about it, with some God Mode growth hormones added, a bot could evolve from merely being a mindless minion, into gaining abilities that go outside of the rules' framework the player is bound by. However, repeatedly losing to a Cheating AI will undoubtedly earn your game some well-deserved rage. Fret not; this is fixable with a little gardening by trimming down the cheating habits of the AI if it gets too far ahead. The technical term for this is “rubber banding” and it’s a common feature in multiplayer games where an AI replaces players who disconnect as a regular bot would be an all too easy target.

These specimens are the actual mechanics used to defeat them. A commonplace where specific challenges need to be solved, often in a particular sequence. They may contain elements of puzzles, patterns, memory tasks, or built-in defeat mechanisms. Usually combined with a time pressure mechanic or a stress environment, these are commonplace and bring much needed variation for shooters, RPGs or MMOs where grinding heavy or farming heavy gameplay would render a game too monotonous. It also makes every fight something to remember and adds an element of challenge that is about figuring out the tricks and quirks of each enemy fight, continuously developing and honing your tactics.

The key is to choose one of these and stick to it. Most projects cannot afford several types of AI and although doable, I would say try to master one type of enemy. Consider which would work best with your game environment and rule set.

Sadly that's it for this week's "Design Your Enemy" Design Table! If you would like to send in a question or write us feedback on today’s session, you can either do it via Twitter, Facebook or email and we will possibly make them part of the next series!