It’s been very quiet recently regarding my new project, (sorry about that!) but I’ve had so many other projects (non-computer-related) going on this summer so I just haven’t had much spare time left for working on the game. Winter’s reached us however, and I’ve returned to game development since the fall! so I’ll stay more inside and work on my game instead, since I get enough of snow during my day-time job.

I introduced the project on IndieDB last spring when I first began the development, I didn’t post it here though since I couldn’t decide if I would use this blog for all projects or keep it as Loot Burn Kill Repeat’s private channel, I don’t believe I’ll be making much more updates to LBKR though and I see no use in just letting this blog die out with little to no purpose so I’ve decided to modify it slightly to include all my projects. Will update all pages and the layout when I get the time to fit this new purpose! The project name is Demox, it will likely be changed later on in the development but I have to call it something for now anyway!

Since last time when I introduced the project though, there have been some changes, primarily regarding the story, which I can’t recall telling anyone about yet though, but also gameplay and mechanics have been adjusted.

After testing out the sidescroller-style prototype alot I just didn’t feel satisfied, I’ve now shifted to a top-down-ish perspective, similar to what I did in my previous game Loot Burn Kill Repeat. 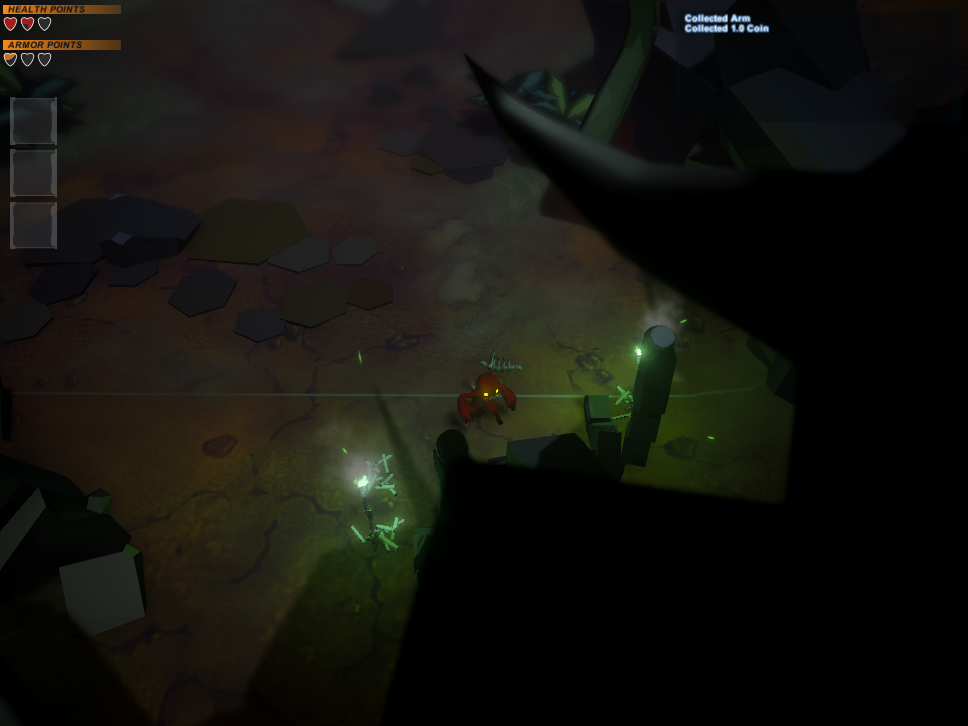 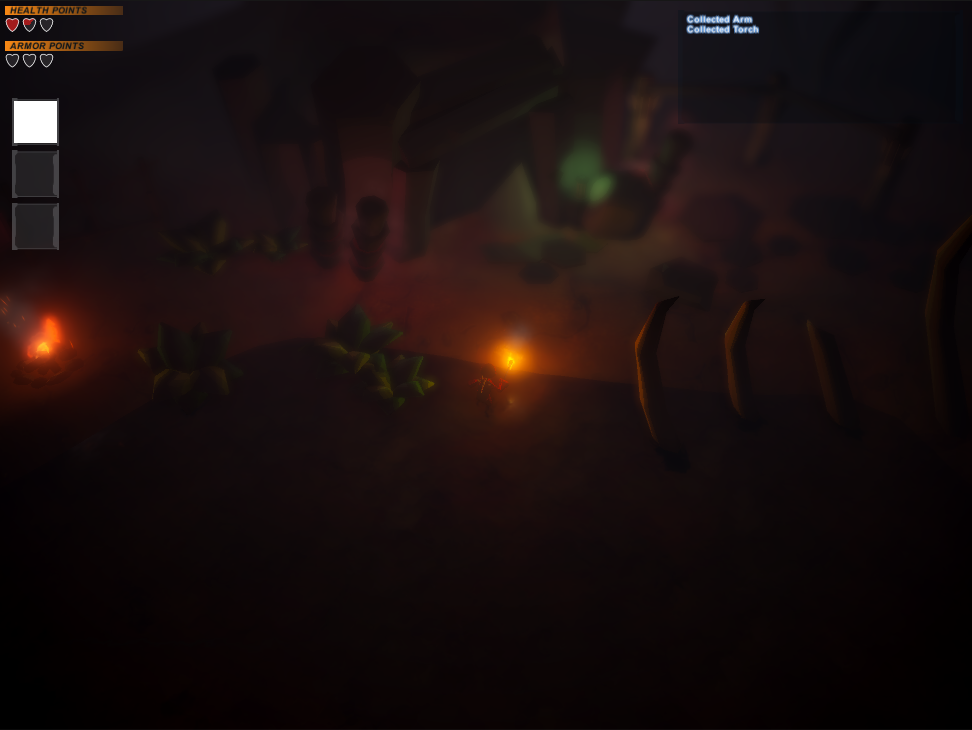 An obstacle I learned from LBKR is camera view obstruction – how to solve the problem with something coming in between the player character and the camera. Most of the geometry in the maps that can obstruct the view in this game will turn transparent, something similar to what was done in LBKR but instead of instantly disappearing, I wanted to create a smoother effect that felt more natural, and that looked better aswell.

My first iteration of the code simply faded the geometry’s alpha value by interpolating between two pre-determined values, this is not a good way of solving the issue though since each object that can fade out will create a new instance of it’s shared material. So alot of memory will be used in order for the objects to store their own instance of the material, and it isn’t very visually interesting either, really. 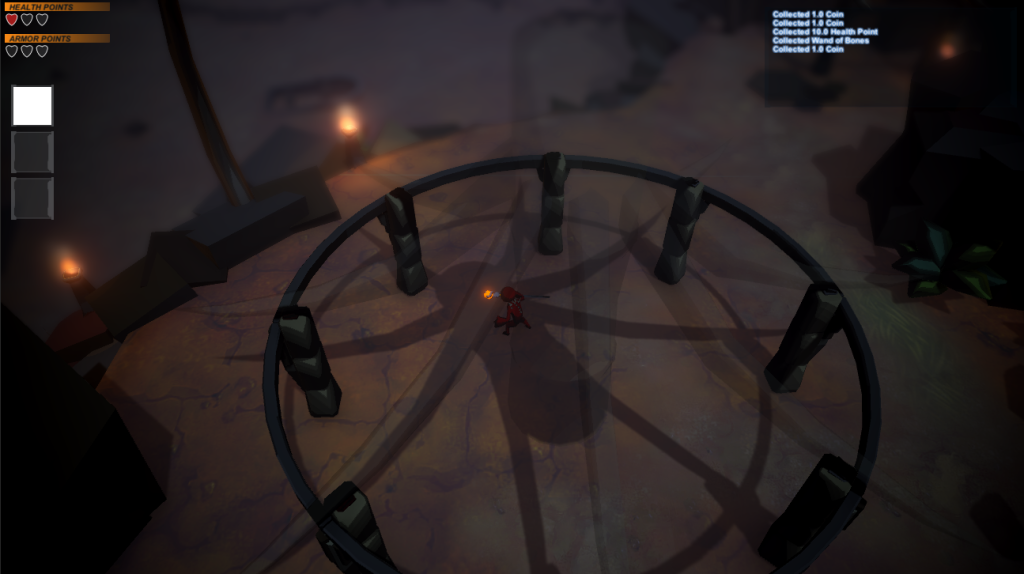 As seen in the image above, the entire object is faded out to reveal what’s behind the geometry

Another shot of the first iteration of obstruction handling in action

It felt in order to create a custom shader to handle geometry clipping, the end result was great in my own opinion.Distance based clip mask shader

Unfortunately this approach does not solve problems with the Terrain mesh obstructing the camera view. I work around this problem by planning each map layout to have as little of these obstructions as possible. Where it’s inevitable the camera can be panned so the geometry won’t be in the way with the help of trigger volumes. 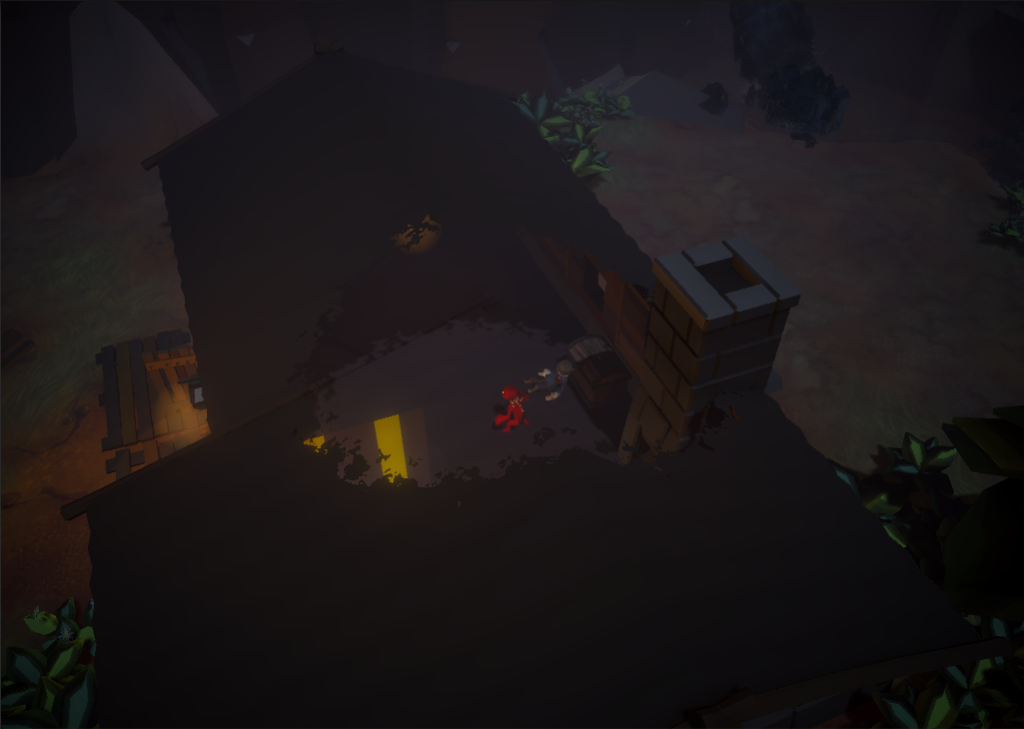 The end result of the obstruction clipping in-game, using the distance clip shader.

While all controls and player actions that were implemented in the sidescroller prototype remains, including walljumping, sliding, mounting obstacles and more, there were some obstacles when changing camera view. The biggest one beeing the targetting of the grappling hook.

OBSTACLE: HOW TO FIX GRAP HOOK TARGETING FOR NEW PERSPECTIVE? SINCE THE PLAYER CAN NO LONGER AIM ON THE VERTICAL AXIS THERE WAS AN ISSUE TO EFFECTIVELY USING THE GRAPPLING HOOK SINCE (MORE OR LESS) ALL HOOK POINTS ARE PLACED AT DIFFERENT VERTICAL POSITIONS COMPARED TO THE PLAYER.


Solution: A quite easy work around, really. I created a new class making use of Unity Engine’s “OnMouseEnter()” and “OnMouseExit()” members, flaging the object as current target.

The very simple script above assigns the object that the mouse cursor is currently hovering above as a target hook point, since the target is defined as a static property it can be easily gathered from other classes by simple typing ”HookTargetPoint.target” since no instance reference is required for static properties.

I’ll take a break here for this time, I’ve prepared for a few more articles that will be posted soon about changes done after the prototyping stage and the development of the game, and next time I’ll talk more about the game world, interactivity, and introducing the AI and item system(s).

Until then, enjoy this short clip of the wall jump and wall slide mechanics =)