Xenomarine is a sci-fi horror themed graphical roguelike in which you play a space marine battling to survive in a vast, alien-infested space station. Version 1.6.0 of the Demo, released today, has some great new improvements to try out including enemy and room animations, better map generation and much more.

It’s time for another major update to Xenomarine, the sci-fi/horror roguelike. In this article I’ll be talking about the cool new features available in version 1.6 of the Demo (available to download for free from itch.io). Check out the main IndieDB page or the website if you want more of an overview of the game.

This update introduces animation to the game for the first time. Xenomarine is a strategy and tactics-focused game with an emphasis on variety of enemies and items and deep character development – so graphics are not priority number one! But I still want the gameplay experience to be as immersive and pleasing to the eye as possible within these constraints, and I think the new animations really help with this.

Other than that there’s not much else to say about these animations except that they are all custom-drawn pixel art (not tweened) and so in some cases took a fair bit of work to get right. Anyway on to the screenshots:

The other big improvement in this release is in the variety of the maps. As a roguelike a central feature of Xenomarine is procedural (or ‘random’) map generation. This update brings two main new features to the map generation algorithms.

First of all I’ve introduced occasional larger rooms into the otherwise grid-based maps. Each room is itself procedurally generated in terms of its layout, so as to generate the widest possible range of tactical combat situations. Here’s an example of one of the new larger rooms, surrounded by smaller ones. 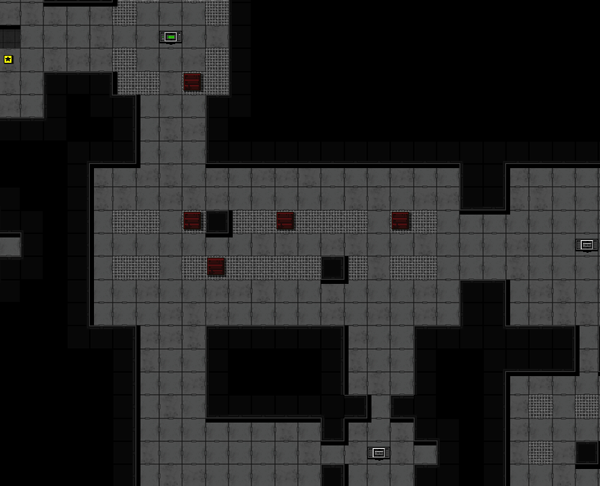 At the same time I’ve introduced some new floor tiles. These again add to the tactical combat options in a given room.

Water tiles (shown below) make a nice splashing noise when you (or an alien) goes through them, but also give you (or the alien) -10 to hit when standing on them (this represents the loss of agility that comes from trying to move around in a foot of water).

The other new floor tile is not really a floor type at all, as it’s the absence of floor: a gap in the floor allowing you to see down into the floor below. In gameplay terms this again offers new possibilities, as these tiles are impassable, but do not impede line of sight or offer cover.

The generation code has also been changed so the corridors are generally wide rather than narrow, as again this creates more interesting combat scenarios. Here’s an example of what one of the new maps looks like in-game: 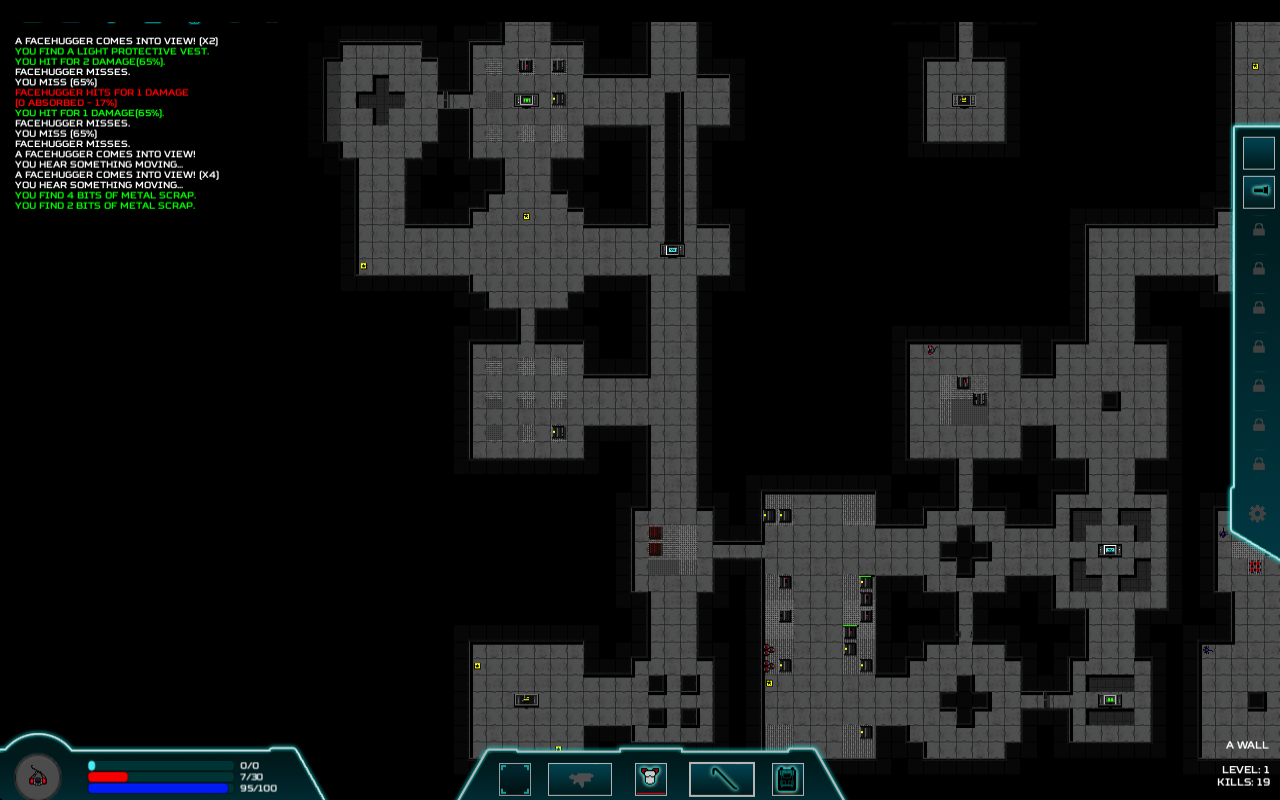 Oh yes, and the level generation code has also been streamlined, meaning levels load faster, which is one or my personal favourite improvements in this update!

There are also a lot of minor changes to the game balance that add up to a much better gameplay experience.

For example aliens that do elemental damage (e.g. the infamous fire-breathing facehugger!) now cause +100% damage rather than +50%, making them a lot more dangerous. And the amount of damage required to destroy crates has been seriously reduced, meaning that destroying crates is a more effective combat strategy for both player and aliens (and making it harder to rely on crates for protective cover).

There are some improvements that come from actually removing earlier features. For instance, medibays (room features that can be used to restore your health) have been removed from the game entirely, as they were found to encourage a rather uninteresting gameplay strategy of returning across the map to an unused medibay when low on health. And the ‘increase strength’ skill upgrade has been made less powerful, making the choice of which skills to choose first when you have gathered enough experience much more interesting.

There are also lots of other minor improvements, like some new sound effects, additional information about map tiles available on mouse-hover, and automatic ordering and stacking of inventory items when they are picked up (rather than having to do this manually). And of course… bugfixes!

Available to try out now

If this sounds like your thing, do try the game now or read more on the website. You can also connect on twitter to make sure you don't miss any updates!