Xenomarine is a sci-fi horror themed graphical roguelike in which you play a space marine battling to survive in a vast, alien-infested space station. Version 1.5.0 of the Demo, released today, brings a host of new improvements, in terms of user interface, graphics and game balance.

Xenomarine is certainly 'in development'! I've added loads of new features since the first release back in January, including things like 3D lighting and torches you can power off and on, but which eventually run out battery-power, leaving you in the dark, surrounded by aliens...

This latest version of the Demo (v1.5.0) has been in the pipeline for some time, and includes a lot of features that I think will really improve the game experience. These fall into three main categories: improved graphics, better user interface functionality, and gameplay improvements.

The graphical improvements mainly involve the user interface. For a start there's the new splash screen, featuring a custom-built animation that mirrors the algorithms that generate random levels in the game. Here it is in action (notice how the flashing squares form patterns that form into shapes like rooms and corridors):

Then there's a new look for all the main user interface panels like the inventory, workbench and terminal. These have been designed with a consistent colour-scheme and other features so they not only look good individually but together (i.e. when you have several panels open at once). Here's an example of the way the new terminal screen (look out for the new skills!) fits together with the (also new) sidebars: 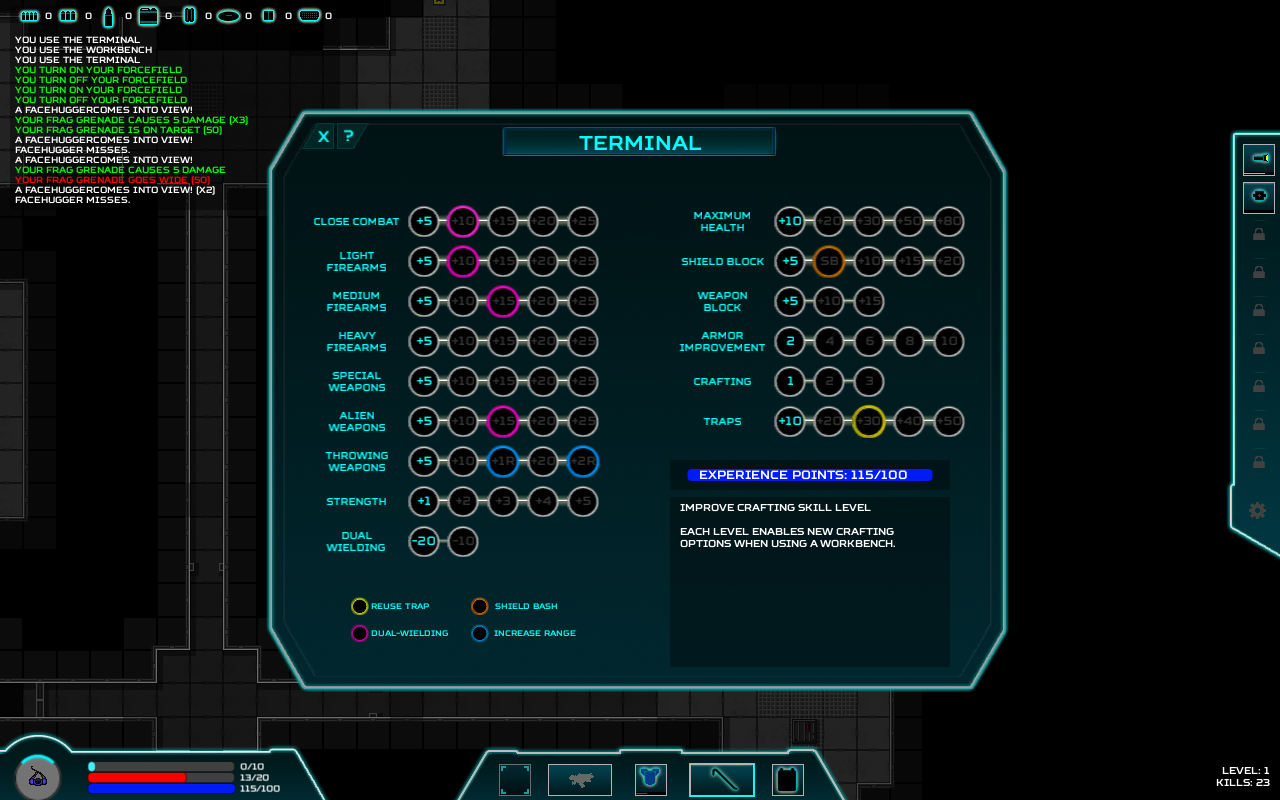 Apart from the panels themselves the item icons have been redesigned, using a design-scheme that mirrors the rest of the UI (and the cyan glow-effect just looks cool, I think) as you can see from this image of the inventory screen: 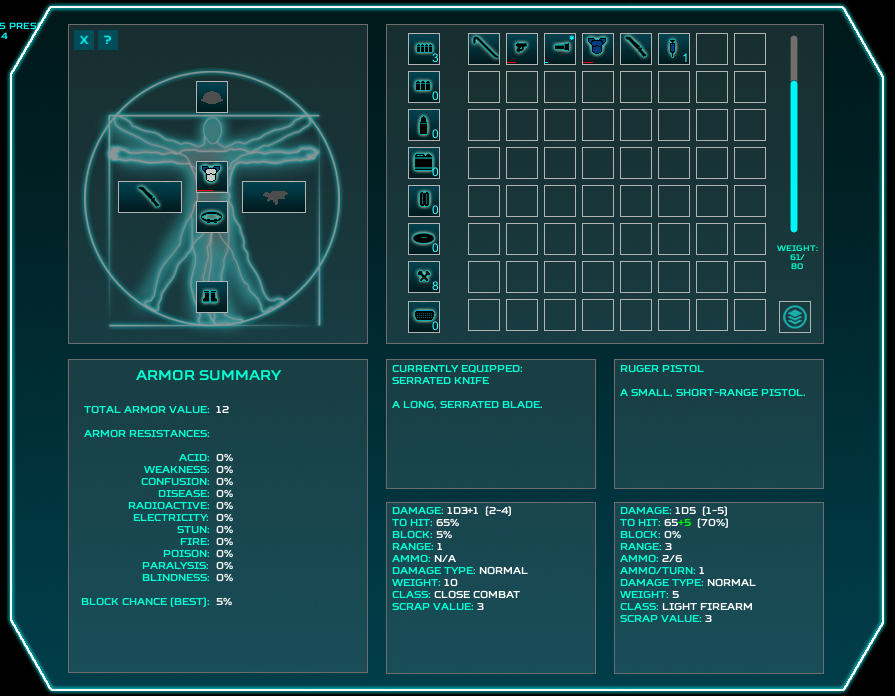 You can see here that I've added a mannequin to make it easier to see where to equip items (based on Leonardo da Vinci's famous image!) Then in the inventory itself, you can see the new icons for (from left to right) a crowbar, pistol, torch, light armor, serrated knife, and stimpack!

In some ways though the other user interface improvements are even more important than the new graphics. Best of all, I think is implementing 'A-star pathfinding', which is quite tricky technically. For the non-techies among you, it basically means you can now click anywhere (really, anywhere!) on the map and the game will automatically move the player to that square (as long as no aliens appear on the way). Here it is in action:

Apart from the pathfinding, which makes exploring levels much more user friendly, another good addition here is one-click ranged combat. Previously you had to first click on an enemy to select it, and then click again to actually fire/attack. Now the enemy is automatically selected when you hover the mouse over it, so just clicking once is enough to fire the weapon, making combat much simpler, quicker and smoother. Here is it is in action (though this is something you really have to experience for yourself):

Other new user interface features are improved sound effects and a range of new game options, implemented via the completely redesigned options screen. I'm particularly pleased with the new graphical help on the control scheme, as illustrated here: 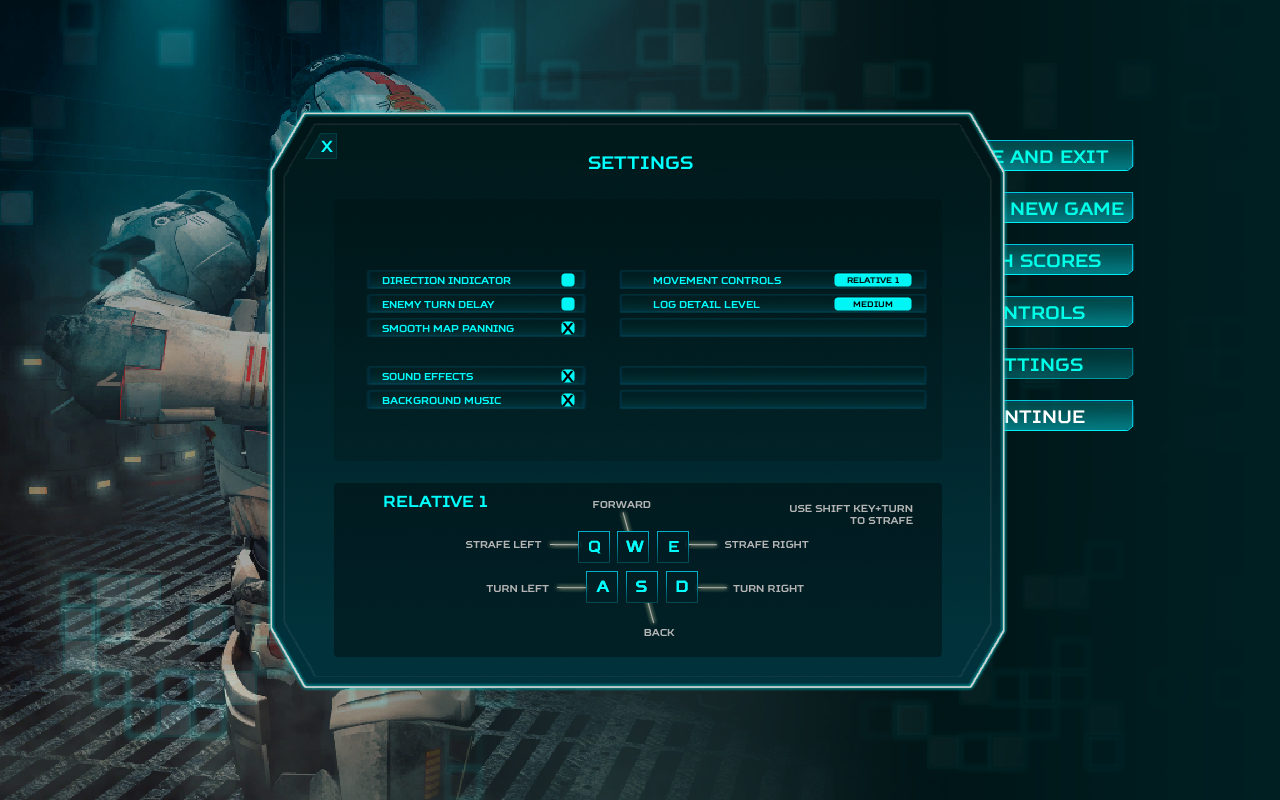 The main gameplay improvements are Improvement to alien AI (more unpredictable movement), some new skills the player can learn (shield block and shield bash) and best of all, larger levels. Previously it was possible to guess which way an alien would turn when they approached you, because they moved in quite predictable ways. Now there is a random element that makes them all the more dangerous, particularly when it costs a turn (as it does) to change the direction you're facing.

The new shield block skill means that you can choose to specialise in shields, not just blocking in general, and learning 'shield bash' means that you can use your shield as an offensive weapon (with more advanced shields it will be possible to 'stun' aliens!).

The level generation algorithms have been redesigned to allow for larger and more interesting levels. The pic below gives an idea of these (though actual levels can be even bigger than the one illustrated below) together with the smoothly scrolling zoom-out function:

Oh yes, improved support for Linux (tested successfully on Ubuntu!) and also for higher screen resolutions, including 1980 x 1080. I've had a lot of interest from Linux users, so I've made sure this version works on Linux. And playing it at higher resolutions is now actually recommended, as you can actually see more of the map, making it easier to get an overview of the level!

As mentioned, Xenomarine is very much in development and new features are being added all the time. But if this sounds like your thing, do try the new Demo at itch.io and please give me feedback (e.g. at the Xenomarine community page)