Development on Defragmented continues forward stronger then ever. As of now, the game as officially entered Alpha. Since the last update, I've taken the time to rework a number of systems that generally improve the overall look and feel of the game. The most notable (screenshot-wise) would be the massive lighting overhaul. Check out the images below to see some new versions of the lighting in various levels.

Previously, lighting and shadow effects would have drastic differences between quality levels. "Low" quality seemed rather bare and uninteresting, while "High" quality was the intended state of the game. After a massive lighting rework, not only do all quality levels look better, there's even a decent performance boost! This was a large undertaking, but well worth it in the end.

While I'm discussing the new visuals, it only makes sense to mention the terminal as well. Compared to previous images, the terminal has gotten a brand new color scheme and some visual flair to go with it. Text highlighting and shadow effects provide some neat things to look at while you read through level briefings. To accompany each level briefing, there is a bare model of the level itself that rotates in 3D space. This way, the player not only reads up on why they're going to a location, but they can also see the layout before jumping in. 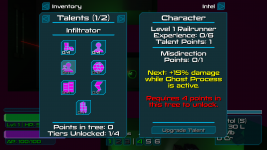 I had hinted at talents and abilities in the previous devlog, but didn't directly show them off. Now that they've had time to go through a few visual (and gameplay) iterations, I can include them in this devlog. As you can see above, talent trees are mostly broken down in familiar ways, providing unique bonuses and passive abilities that improve as you move down each tree. Every class in the game has two trees that lend themselves to different playstyles. Mix and match for maximum effect! On the other hand, the image on the right depicts the player's decoy ability. There are some fancy new effects accompanying each ability use so you know exactly what you're using. I've also added some brand new features like legendary weapons and hacking. I'll probably cover those in more detail in the future.

Instead of stretching this devlog on indefinitely, I recommend checking us out on Facebook or Twitter for our upcoming Artist Spotlight. We have a number of new, highly talented musicians joining the soundtrack. Be sure to check back on our social media later this week for the full scoop!

I congratulate you on proceeding despite the KS failure. You are a brave one!

Thank you. We were determined from the start to finish the game regardless of Kickstarter status. We have a much smaller budget to work with, but we're definitely going to take it as far as possible!