A quick look at some of Cosmonator's arsenal of defensive abilities and spells!

In Cosmonator, as in all action heavy shoot-em-ups, things can get pretty hectic pretty fast. (If they are not hectic enough, then you aren't playing on a high enough difficulty!) So for this reason there are several cool defensive skills and spells available to players who either struggle to dodge bullets generally, or who want to be able to take on enemies that are so tough that dodging is tricky even if you're a danmaku master. 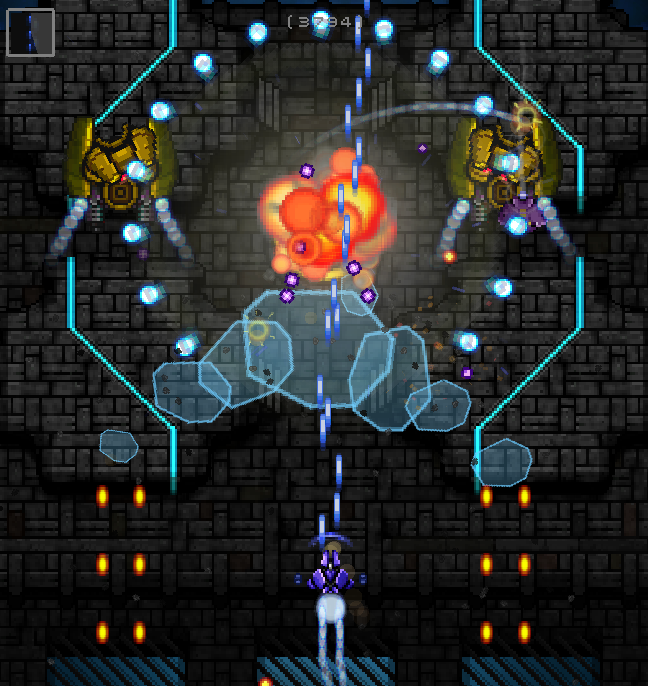 Some of these skills / spells are pretty straight forward RPG-style fare. One of the most basic defensive spells, 'Barrier' (see pic above), simply summons a cluster of defensive force entities that create a wall of energy in an arc in front of you. The energy barrier soaks up enemy bullets, but each individual energy entity only has a limited amount of hit points, so if you're in the middle of a serious bullet frenzy it won't last very long!

One of the cool things about Barrier is that you can cast multiple overlapping energy walls cumulatively (e.g. below right) when the action gets really hot, making you pretty much 100% invulnerable as long as the barriers last. 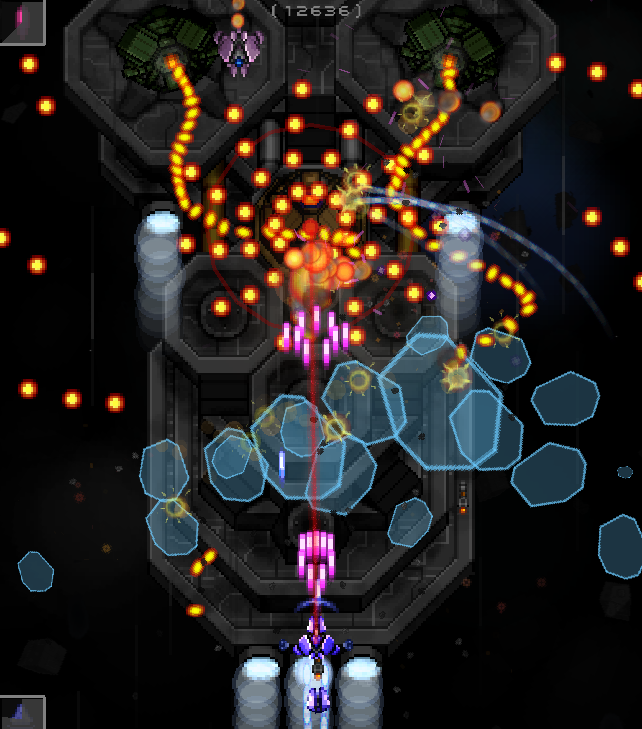 Some defensive abilities are less straight forward. The 'Shockwave' spell is normally an offensive ability; it emits a damaging shockwave that destroys enemies close to you. But if you upgrade Shockwave with one of the special rare gem currencies that are scattered throughout the game, you can give it an additional defensive function. It will now repel bullets as well (the closer the bullets, the higher the chance that they are repelled - see below).

One of the most powerful spells in the game, 'Force Field', works exactly the opposite way. Normally this spell creates a slowly moving energy wall that deflects all enemy projectiles (you can see just how crucial this can be against massive barrages of enemy bullets - below right / left). But in this case if you spend one of those rare gems to upgrade the spell, Force Field takes on an additional offensive property: the laser wall will slowly do damage to all it touches (and in the process simply obliterate any small enemies that fly into it). After all, the best defense is a good offense!

Finally, there are some really specialized defensive abilities, like the Guardian Drone spell that can be cast only if you have an upgraded drone function. This spell equips your drone with a defensive laser beam that shoots down enemy bullets for a while - but normally it's not that incredibly useful, since the laser beam's rate of fire isn't all that rapid and so it only shields you against relatively easy volleys of enemy bullets. However, in the hands of a Drone Master (a 'Master' upgrade that allows you to summon additional drones side by side) this makes you untouchable if you have enough drones summoned at the same time!

(Here's a full gameplay trailer, if you're curious to see more of what Cosmonator has on offer!)