Changes have come to the DBolical Discord with new channels, roles, and more!

Hey everyone! In this article we’re going to be going through the major changes that are happening on the DBolical Discord, and send out a call to action for modders, developers, and users of the site to get on and get involved with the community! These changes are aimed at making the Discord a more welcoming place with more variety possible in conversations, and we’ll be describing the impact we’re hoping these changes have. If you want to check out the new and revamped Discord yourself, join here: discord.gg/5DTa2tf 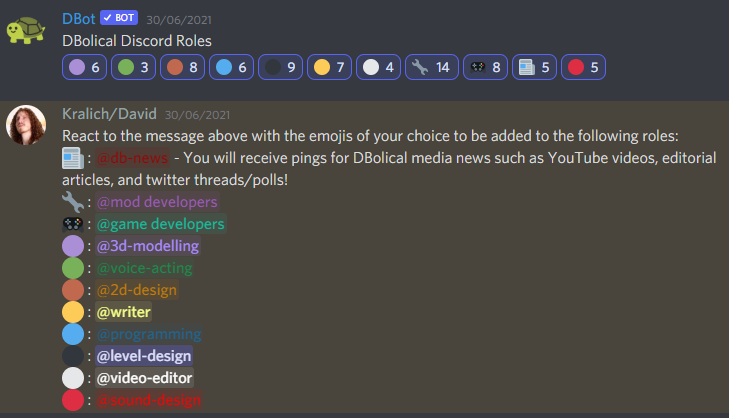 The first major change we’ve done is implemented a new roles bot that will allow you to automatically assign yourself a number of roles on the Discord. The “game developers” and “mod developers” roles previously required manual addition by an admin, but no more! The other roles will also allow other people to see what your areas of interest are, and will factor into another change we made that we’ll go over later in this article. The biggest addition here, we feel, is the db-news role, which will be pinged for editorials, videos, and polls! More on that in the next section of this article.

The reason we brought in these changes was to broaden the potential engagement with the hobby we all love - game development. Automating the process means less overhead for admins, and more choice for the users of the server about how they want to interact with the community as a whole.

Next, we’ve added a few news-related channels - db-news and headlines-rss, with the former being an “opt-in” channel that you’ll receive alerts for if you sign up for the db-news role! Seeing as we’re turning editorial engagement and community features up a lot, this channel will be a busy place with new articles, videos, and polls to read and take part in every week! Even without the role, it’ll be worth keeping an eye on for anything that catches your attention. Meanwhile, the RSS feed will directly track headlines from the site, allowing you to see all the newest in modding and indie news as you browse the Discord, from 5am to 5pm each day! This isn’t all we changed, though, and the roles play a big part in our next section. 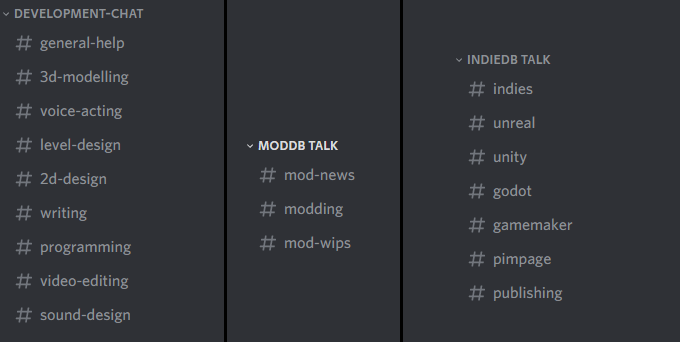 One of the big problems with the previous layout of the Discord was the game-specific channels. Whilst these are good in theory, in practice, it isolated our community of developers into niches. A Command and Conquer modding isn’t likely to have a lot of interest in Source Engine modding, and the result was closed off channels that rarely saw active use. As a result, we’ve archived these channels (don’t worry - if you were one of the few that had a good conversation in there, the channels will still be viewable, just not usable). In their place, we’ve created a new category and set of channels that cover more broad topics in both modding and game development. These channels are where you can post your WIPs, links to appropriate work, and also ask for help in that field.

ModDB talk received a few specific channels that give it a little more room for being modding specific, and on request, the IndieDB talk has received a Godot channel for discussing the Godot engine. All in all, these channels are much more inclusive of the varied and diverse community that makes up both sites, and will allow you a better access to taking part in the community.

In preparation for these changes, we shuffled out old moderators and plan to bring in new moderators to help drive and start discussion, engage with users, and help brainstorm ideas to get the Discord community moving. If you’re interested in applying for the position of Moderator, please fill out the following Google Form (you will need to sign in with Google to submit your response): Forms.gle

With the recent change in community management, we’re hoping to significantly increase activity across all social media and engage more closely with the community than ever before. This Discord is your Discord too - and together, we’ll make it a good place for everyone, modder, developer, or user. Join it here and be a part of our new Discord plan!

Interesting. Passing by, looks already a bit better structured than before. Have I read it correctly that there is now a moddb discord bot? That's something many people of my little community are surely looking forward for, for a better moddb integration at the discords regarding their own news articles.

One can still not change the own nickname though :P

Hey, I'll fix the nickname permission - as for the bot, it's not an official ModDB bot, but the RSS bot we're using is open source for anyone to use and the RSS text can be obtained from the headline box on the front page of our website.