Dark Throne is adventure RPG which takes a long-traveler who is going to repair the damage done by a mad king. Along the way we will be able to save the characters that tell us about the world in which we find ourselves. Your task will be to beat the mad king and restore order in the kingdom.

In the game, we follow the fate of a certain adventurer who went to the dark land and intends to repair the damage done by a mad king. During the game we release NPCs that tell us more details about the world when the goods are in.We learn from them that most of the creatures in the kingdom had lost control of himself as the king ordered throw curse on subjects and enemies. 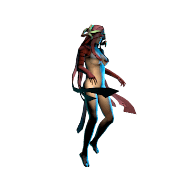 The game has RPG system that allows us to develop nine skills:

Skills will be able to develop thanks to the characters that we have previously saved. An important part of the game will fight the boss. Each different type, way to fight us. Fighting them requires us finding strategy.

and one of our opponents will also be the knight defends move to the capital. On our way able yet powerful burning Treant and himself mad king. In the game we will have to also watch out for poisonous swamps, pits and flying fireballs. All of these obstacles will be able to use against opponents. The game will be able to save the kindling fire.

The game was written in java. We can control the game using the keyboard or controller, xbox 360, and others.

In the full version of the game will be included:

I'm on Steam Greenlight and Indiegogo