This is the second November update we’ve had and it's huge. Though for me, this is the pre-Egg Nog edition :)

We are coming close to a possible update to the current VR missions build, but we have no definite date yet. Needless to say, it’s being overhauled like crazy.

*The following are entirely VR missions updates, and will be included iteratively with multiple updates. Every item of content you are about to see is not finalized.*

Feast your eyes on the fancy hallway that you spawn in initially in Dark Storm: VR Missions. This hallways exhibits the high tech look of Irving Industries, and the huge budget of the custodial department. It leads to the Insertion Room, which we’ve also posted below to show the similarities. 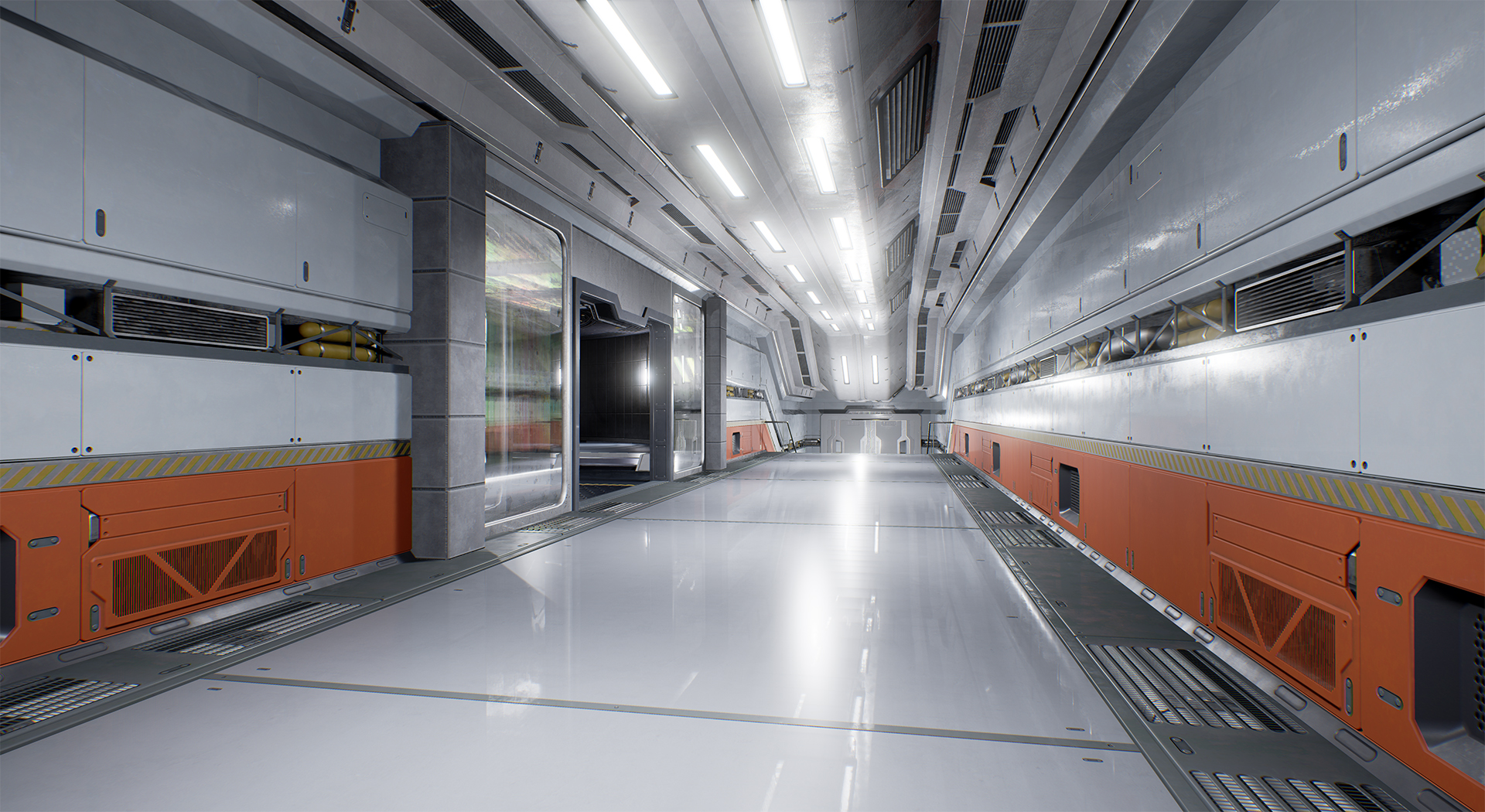 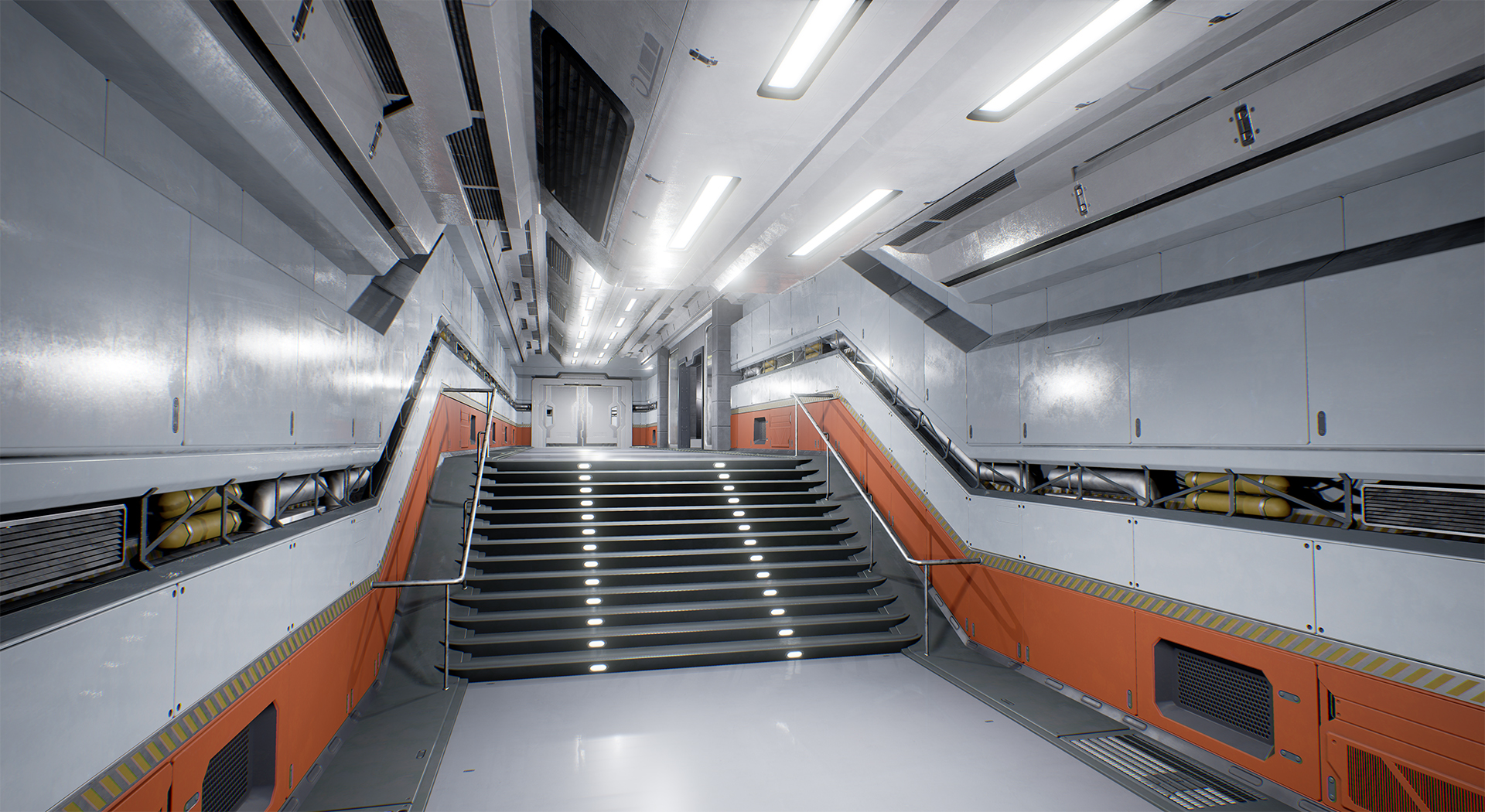 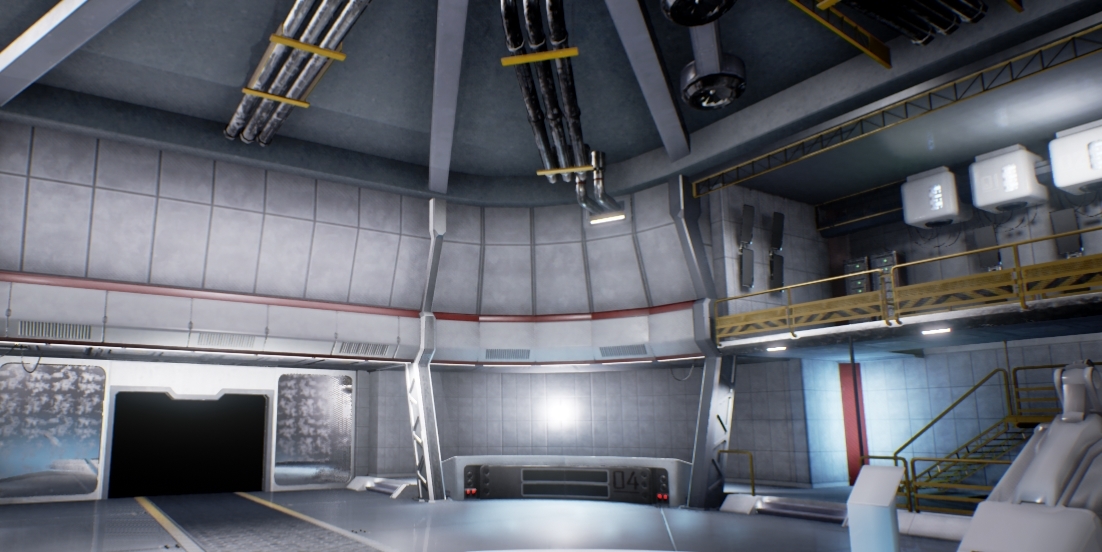 The VR environment has been painstakingly tweaked to get the right look, and this time around we think we may have found the sweet spot. (Of course, VR is a subjective environment) 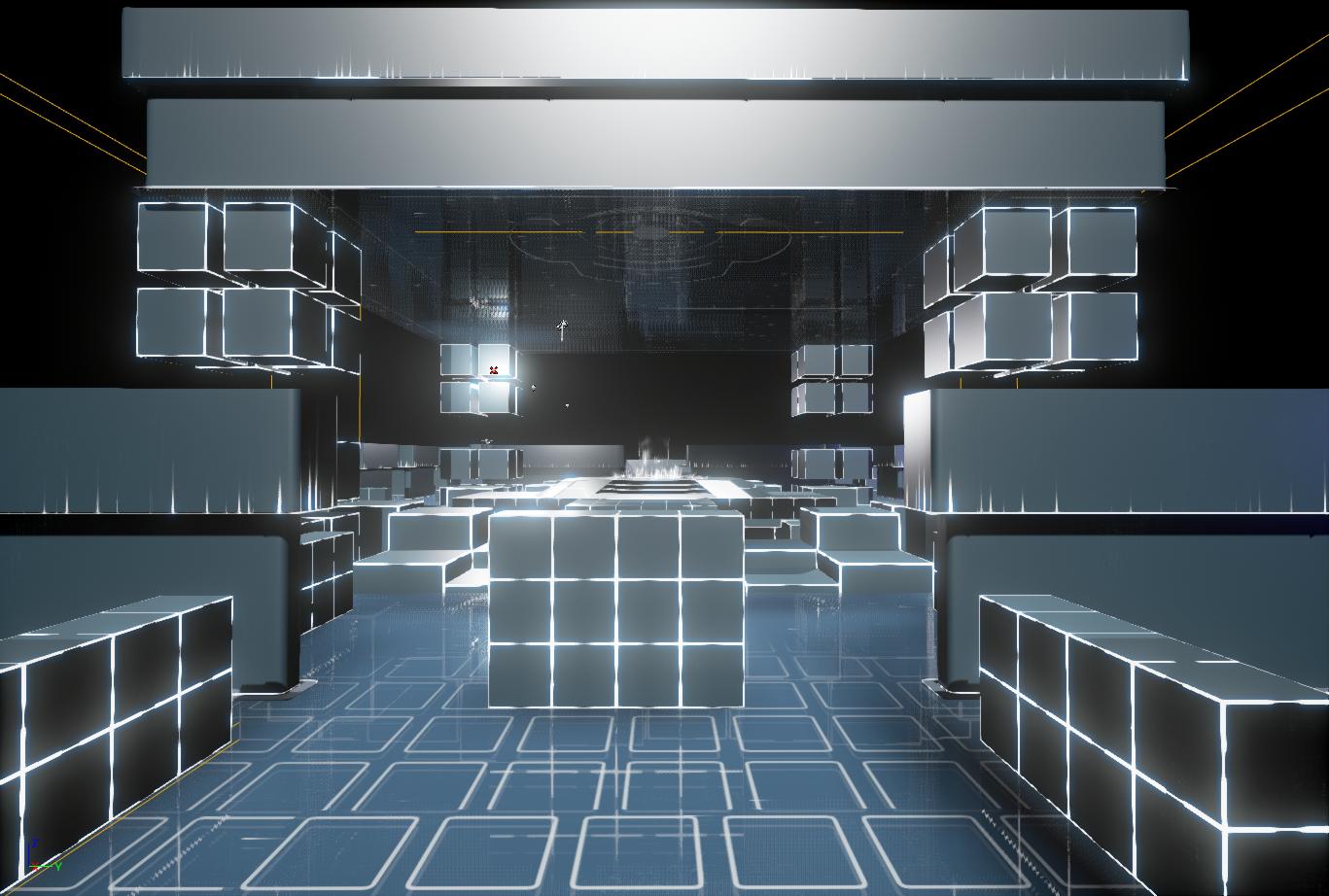 A majority of the maps playable in Dark storm VR missions will be scaled with a mechanical / gameplay influencing sense of verticality.

Providing several vantage points and avenues of approach, locations can be accessible via teleporters / stairs / and hidden paths.

Progressing in each VR mission not only will be exploitable in a tactical sense for the player, but they will also offer the enemy a key vantage point to pinpoint your position and hunt you down. Therefore making stealth to be of utmost importance to finding the proper approach to a specific vantage point.

This also transfers over into VR mission based objectives in that each map will have a specific goal. Some more violent such as neutralizing an officer, and others requiring a more tactical approach such as reaching the extraction zone within a certain time frame, or bypassing objects impeding your ability to complete the level. 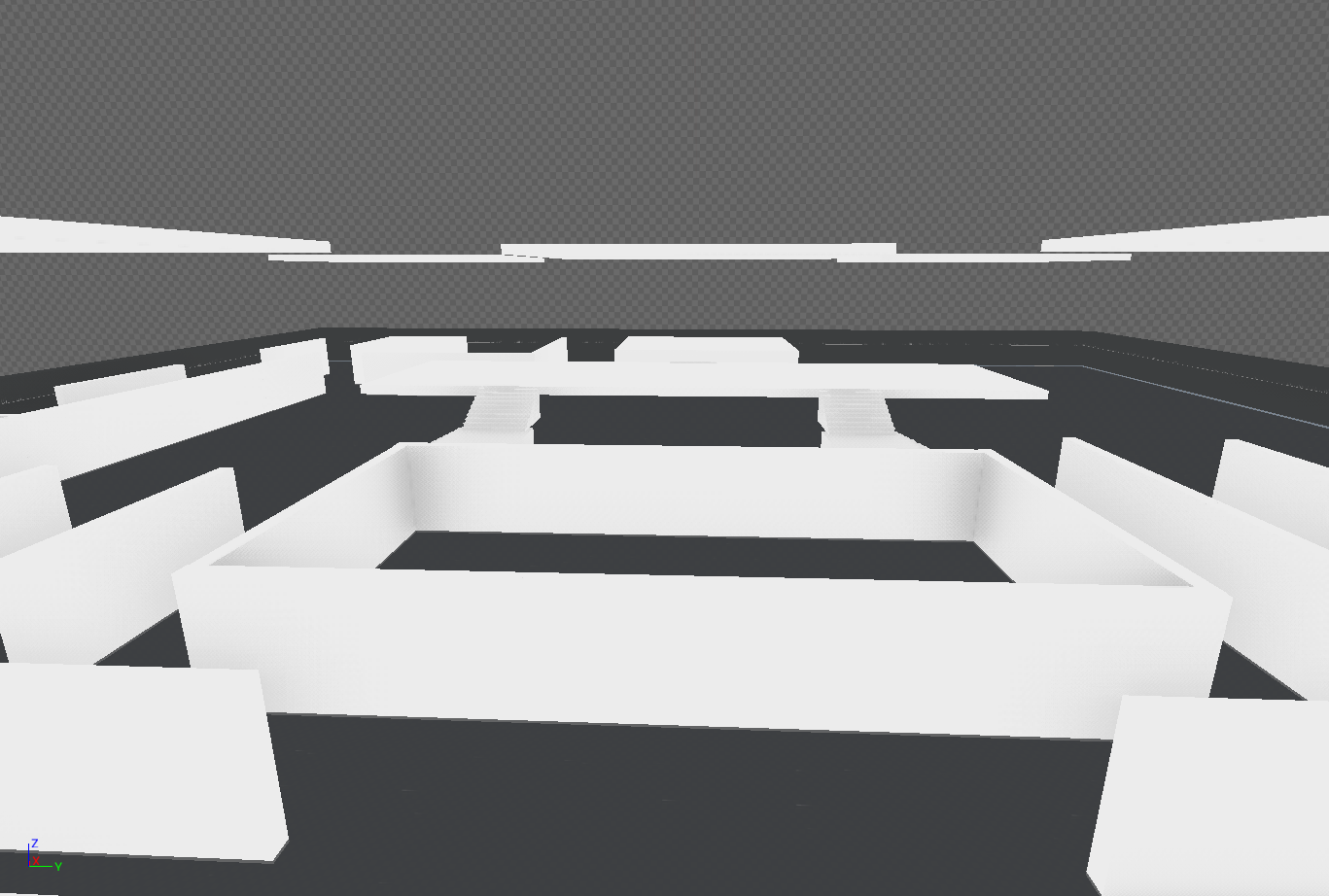 With these objectives, later VR missions will make use of scalability and verticality to increase the challenge of needing to move up or down to a position that is vulnerable until you have a way to gain intel on it.

Both of these will simply be introduced, but gradually change the farther you progress. It offers a sound challenge with each map presenting its own gameplay twist and quirks to work around. 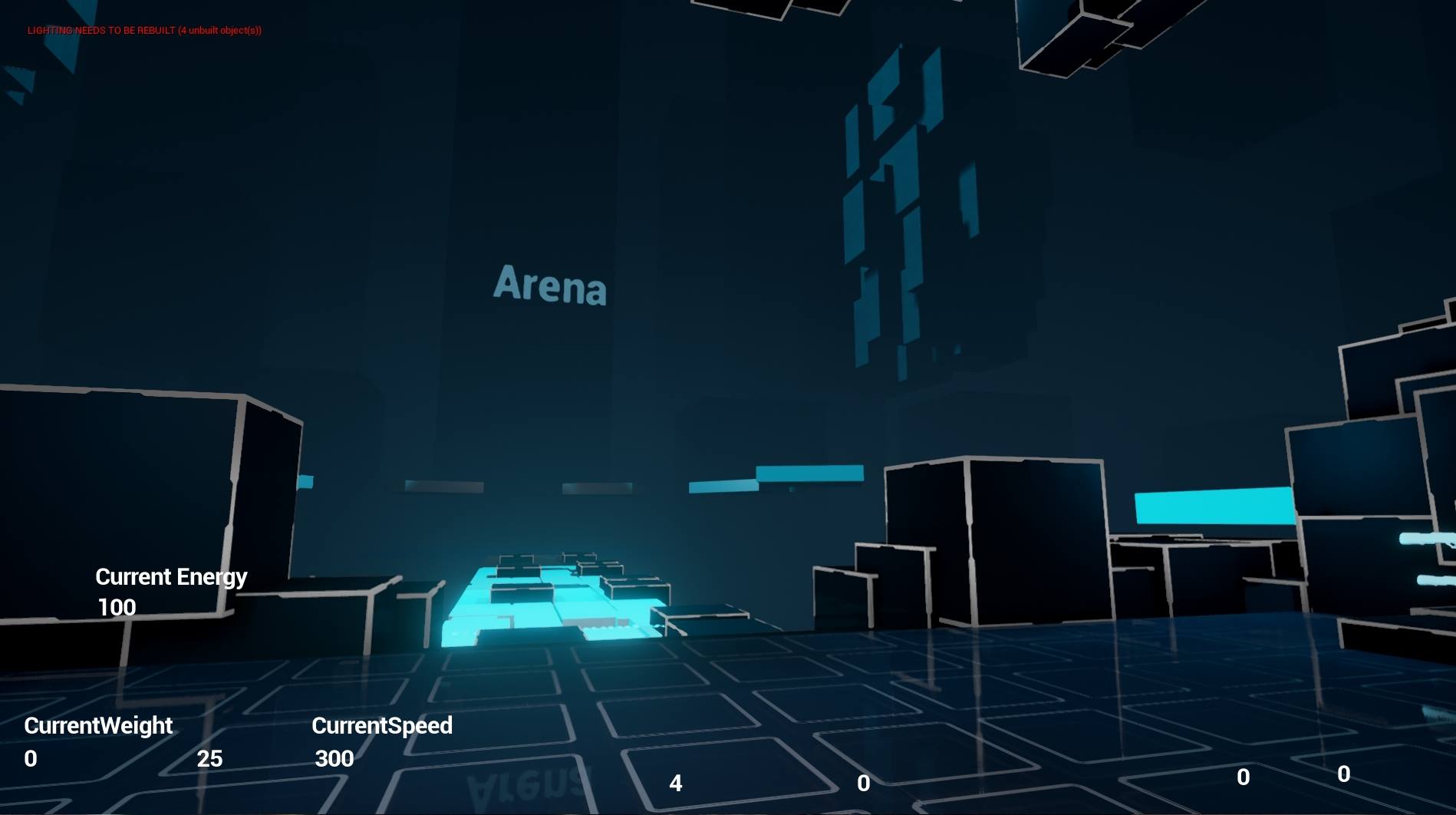 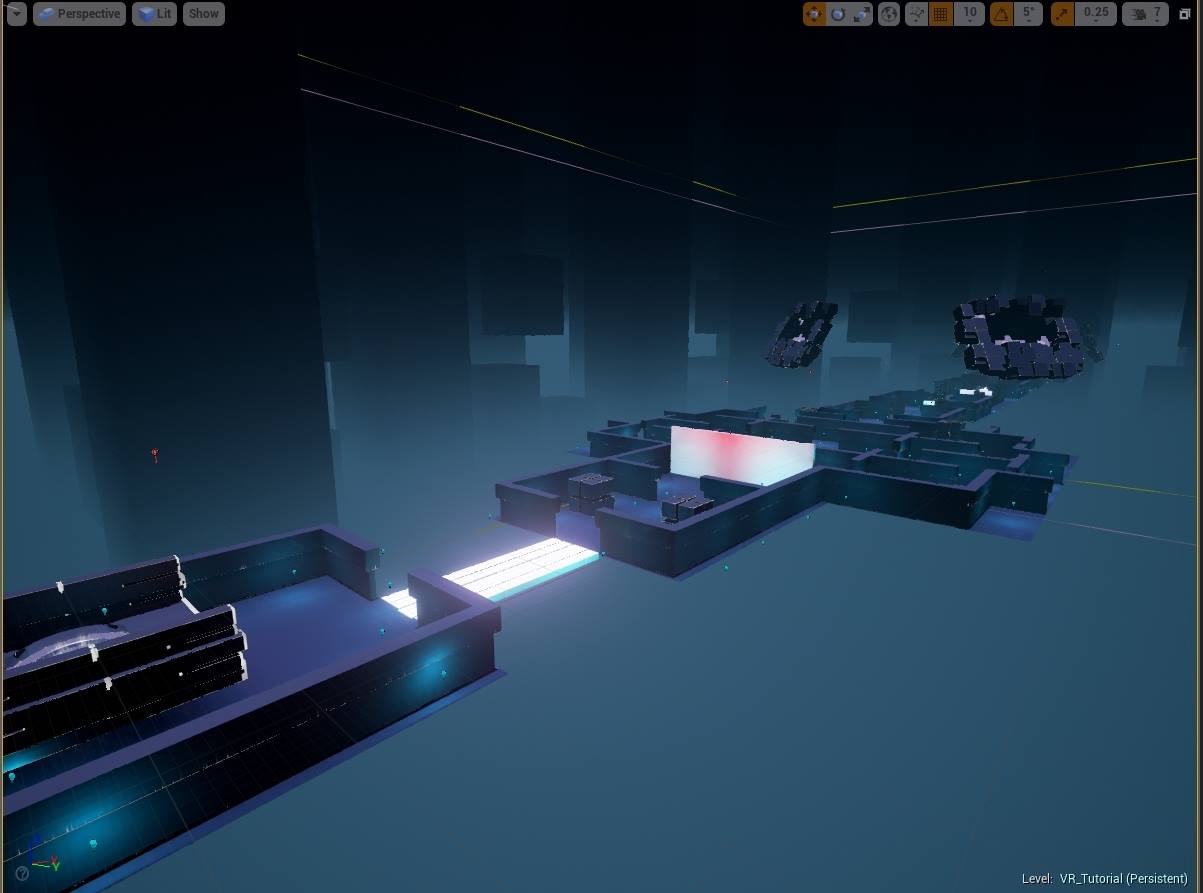 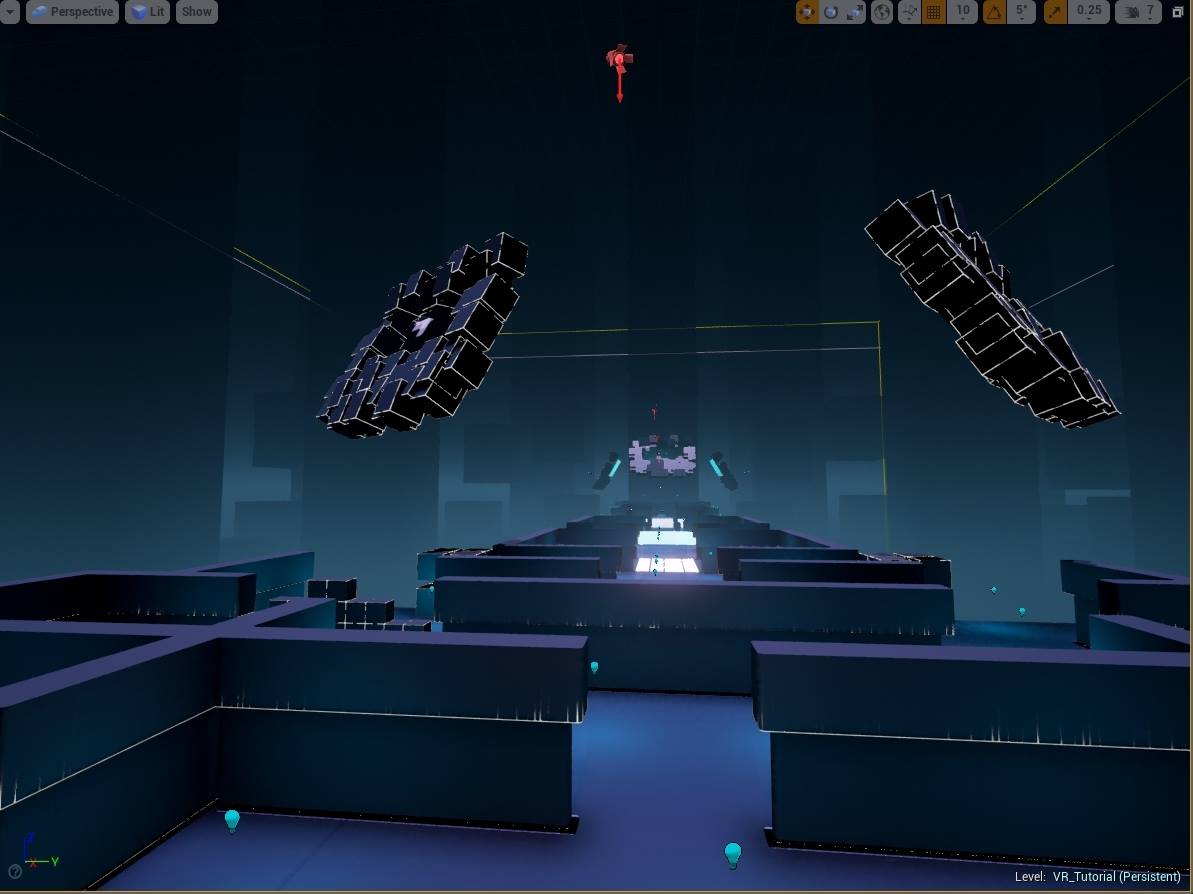 Here’s a quick walk-around video of the current VR hub:

Last update you saw the Kronus Z1200-BA* “Devastator” Single-Barrel Pump Action Shotgun*, this week you can see a different perspective of the design, and some of it’s features. Note, this is not a final design. The shells are probably are going to be well..bigger.

*Named and model changed. Can you guess what the BA stands for? 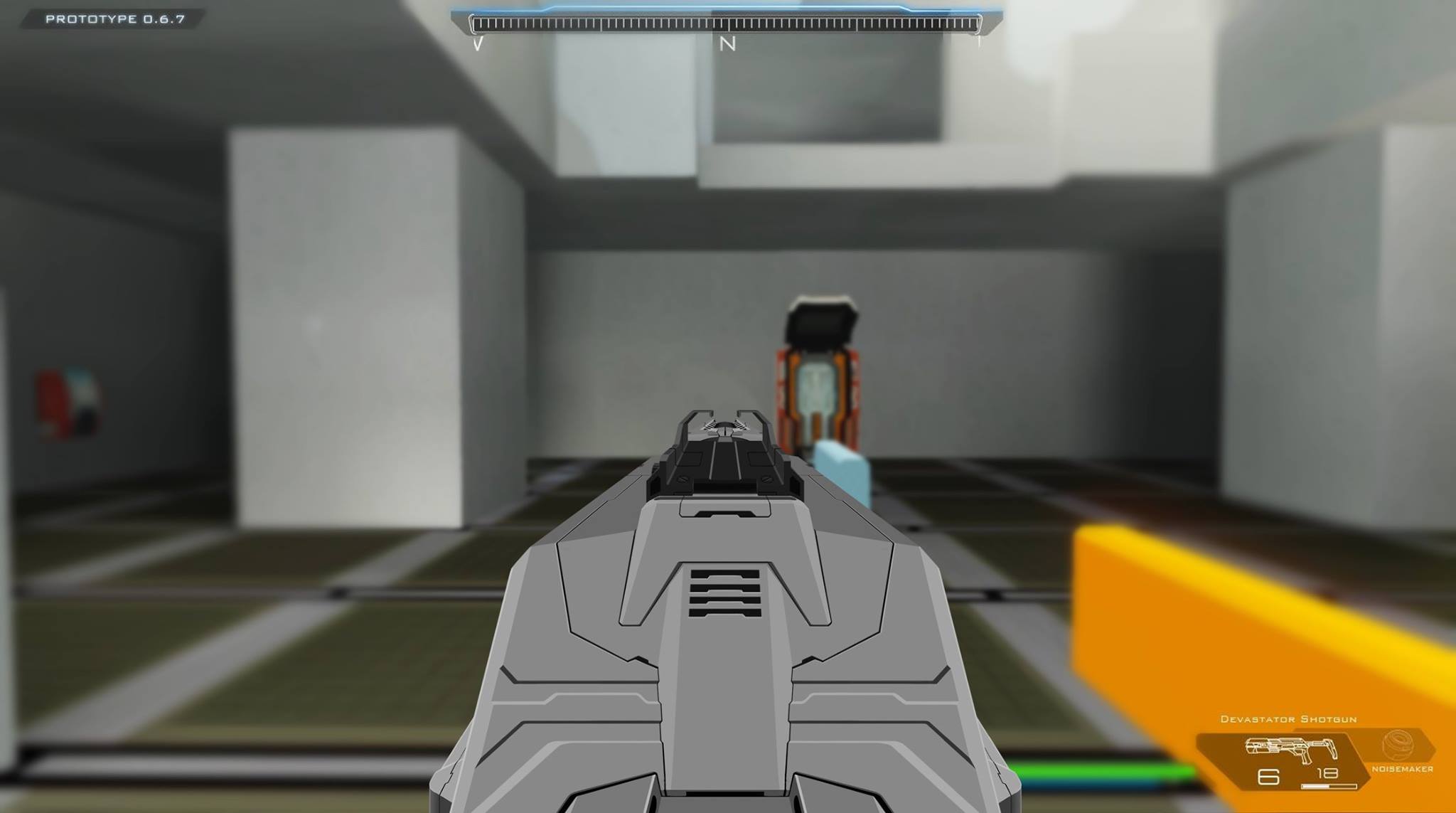 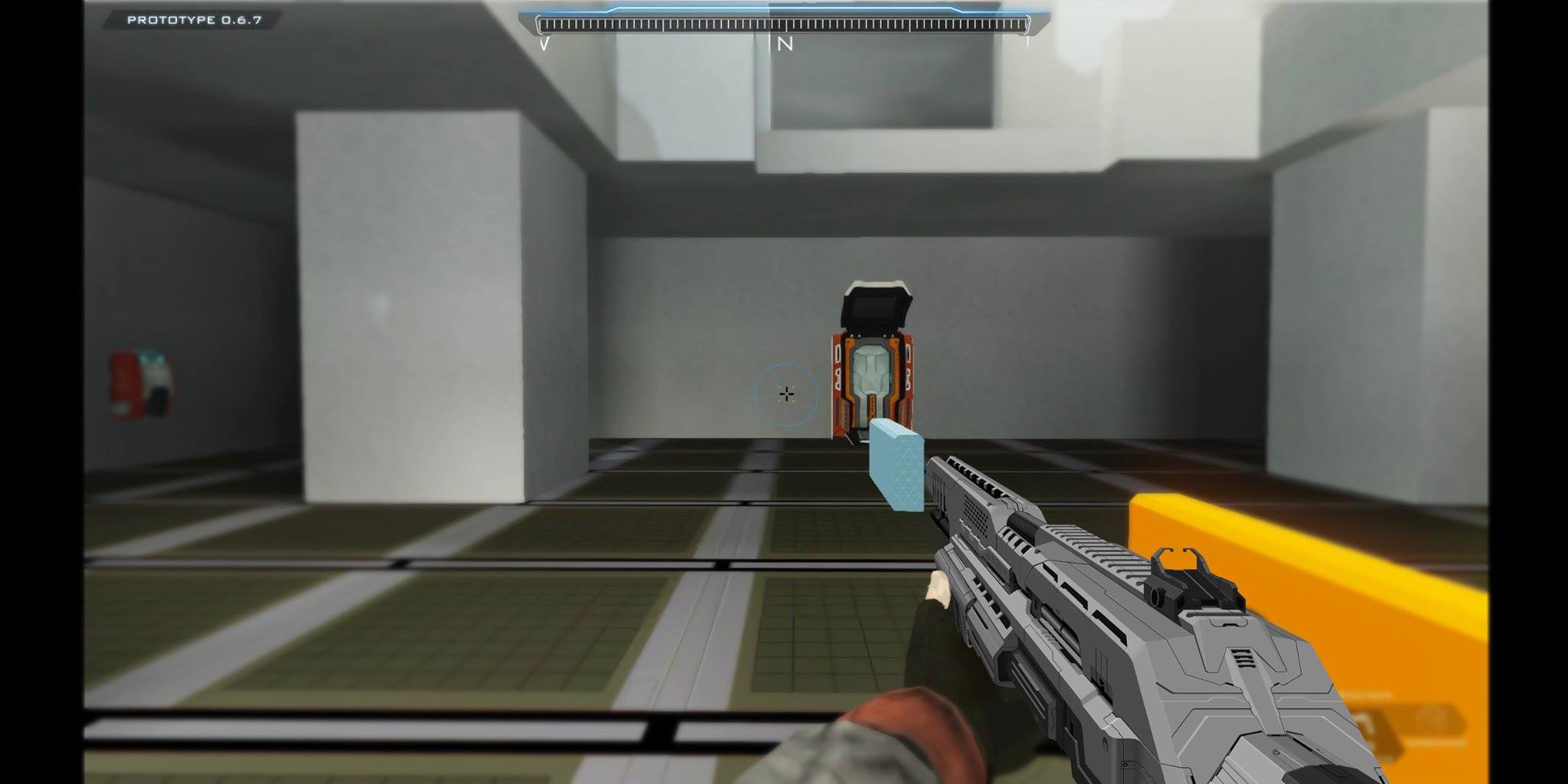 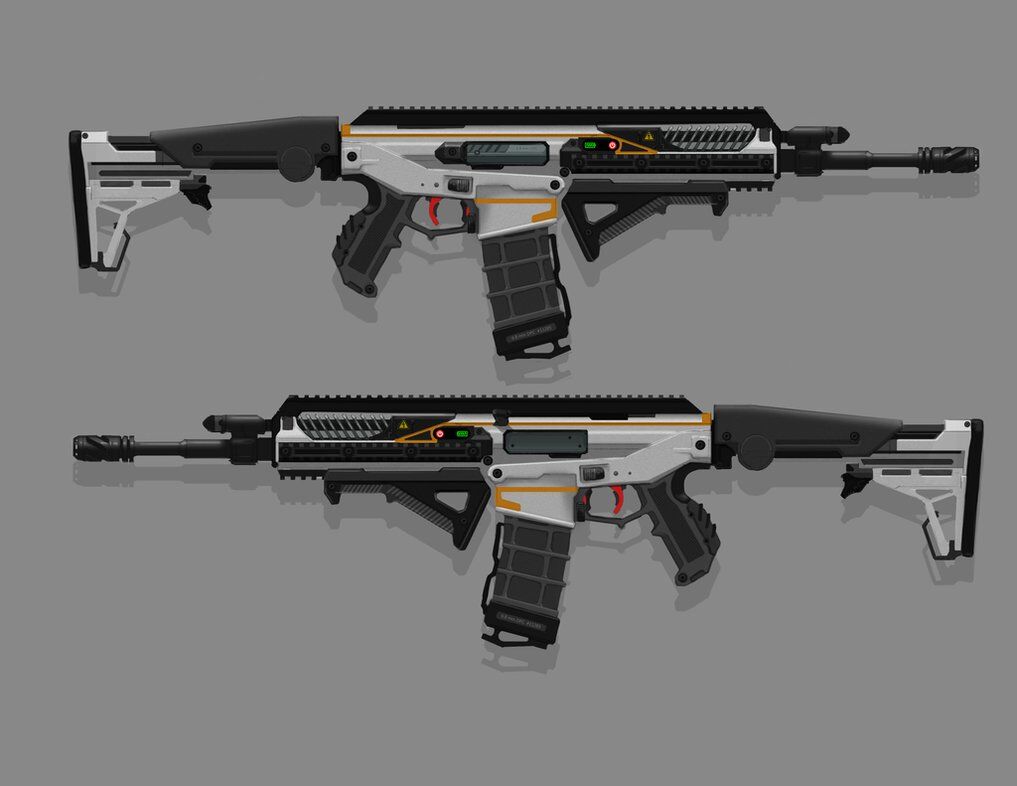 Several weeks ago we showed you the pistol suite. Below is a current model with the silencer attached. 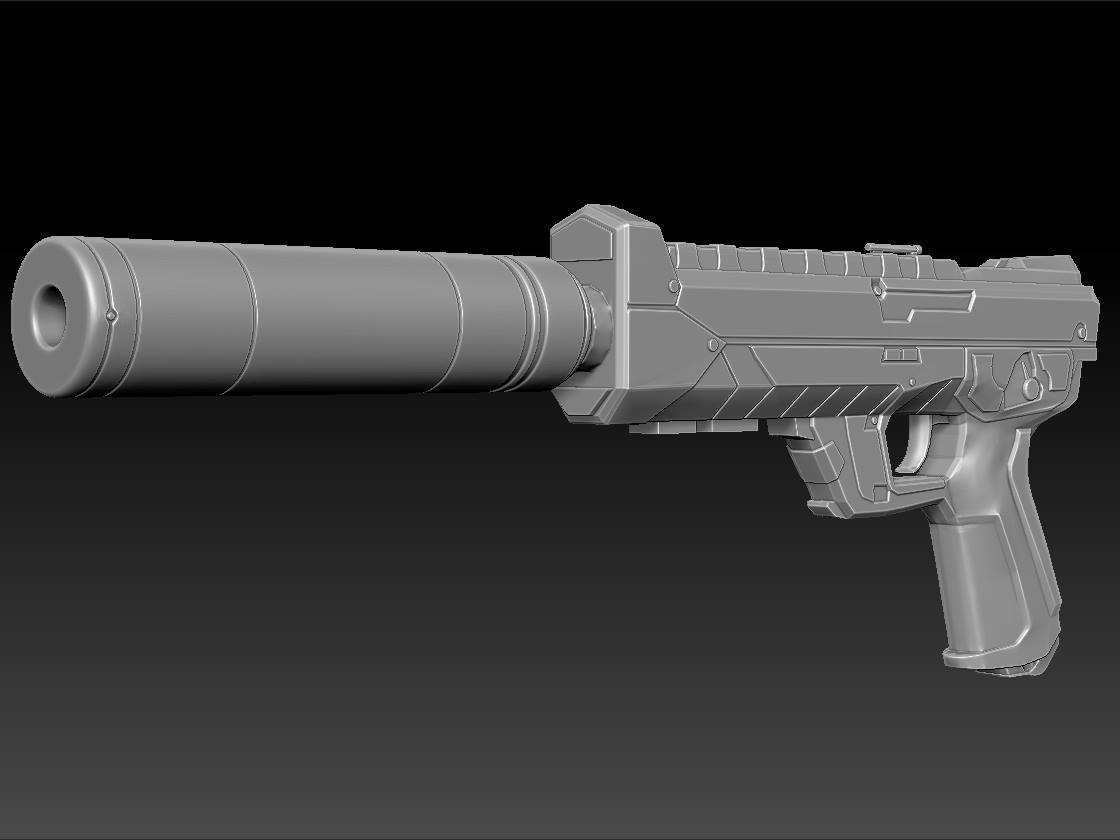 Pistol with silencer modeling in progress.

We’ve shown you the good characters, how about some bad ones? 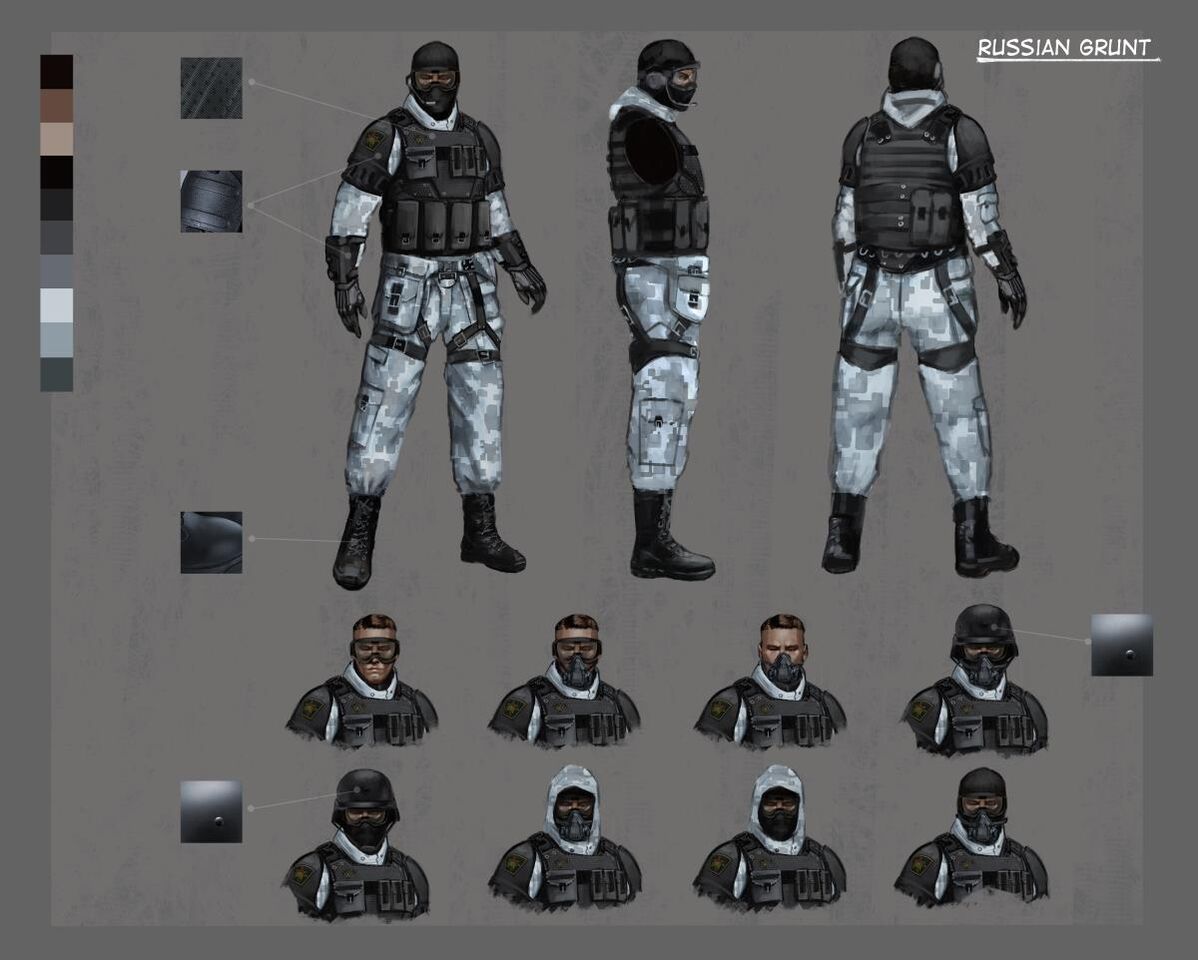 Art concept of the standard grunt. You’ll be fragging a lot of these guys. 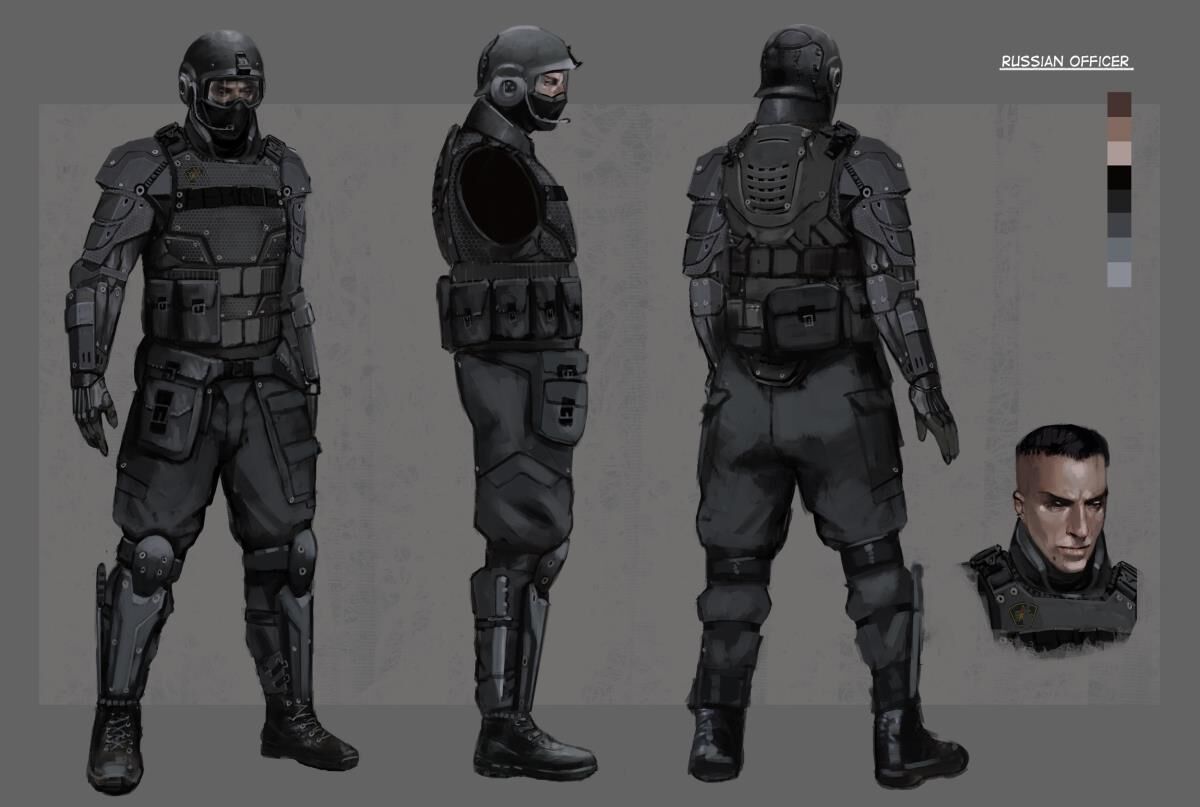 Art concept of the officer. This unit is not only tough, but buffs all the other units through leadership.

Current modeling progress of the officer.

As you know, the animation portion of any video game is the most taxing. We’ve been trying different methods such as target framing (or keyframing) and motion capture. Below is a current work-in-progress of several animations. These are absolutely subject to change.

We have refined the design of the launch of Dark Storm: VR Mission. A launcher that will also include updates and news about Dark Storm. Below is a work-in-progress. 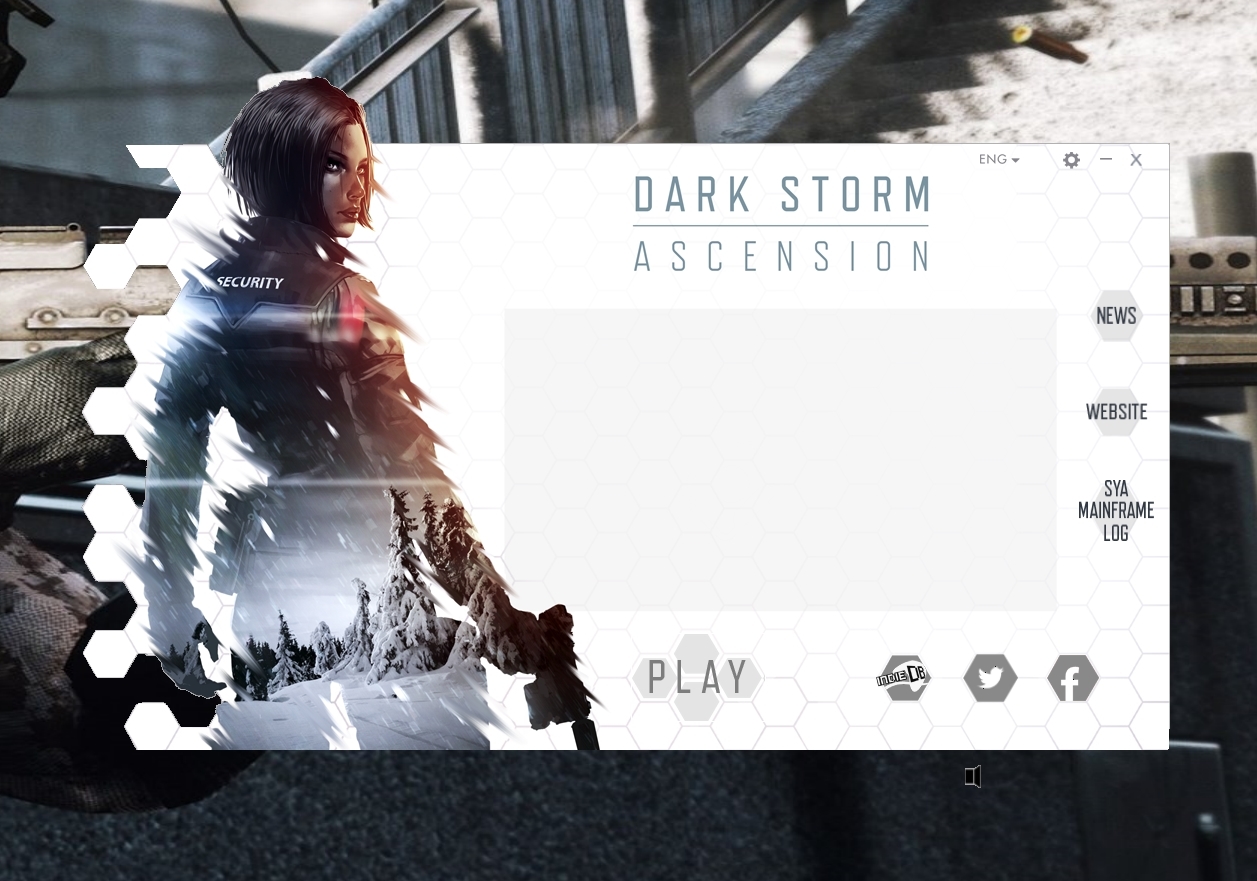 (Note: The background around the edges of this image is the user desktop, not the launcher.
The launcher is meant to preserve transparency.)

Oh man, it all looks so great!

Well, okay, I tell a lie. I don't like the shotgun because it's so blocky, but that's just personal taste, nothing more.

It's subject to change, but most of us personally like it, and for me sound design is going to be interesting on that one.

I need to go watch Eraser...

Like I said, it's purely personal taste. My tastes run towards clean lines and minimal amounts of furniture, but I know a lot of people love blocky/oversized designs.

Dude... this looks like you're super dedicated and really mean it when you say you'll release. PLEASE, PLEASE, focus on amazing immersion, gameplay, and most importantly STORY. That's what makes games like these. I'll definitely play it if so. :)

Honestly story is what we'll probably least have issues with since we hired a writer, and a novel is being released as well. But please understand that Dark Storm: VR Missions (which is on Steam now) is not a full story game. It's just the VR missions. The game we have planned to release some time next year however, is a full blown single player story experience that is fully voice acted with cinematic score (by yours truly) and cut scenes.

Author,can you answer me a question, Why on earth when there is a "cold war" title, the potaganist will always side with the US and Western world,and the western world will win or at least push back eventally? why cannot the story can let us play a eastern/communist agent to sabotage the west.

Its not a matter of picking sides though that of circumstance that Amber works for a private company contracted and supplying western military.

There is no victor here in terms of West / East there is allot at play and various events that the player will have to engage with and make sense of the story as it unfolds.

Floor lighting is a bit too much on top screenshots, everything too blinding white. Amazing art, good 3D models, nice weapon concepts otherwise. You made the right decision going episodic. I looked at the content and wanted to suggest going for a fast and small release first w. couple of hours gameplay max. Episodic is the way for you.

The lighting of the maps is still very much a work in progress merely a base to work with and expand upon later.

Thank you for your input!