Dark Storm has been under going a lot of development and planning lately, and we'd like to update you on our current progress. Expect updates more often in the future as we ramp up to the Dark Storm: VR Missions update for all current owners.

Here's a quick list of what we're aiming for:

Ideally this update will be available the end of this year for free to all current owners of Dark Storm: VR Missions.

Without further delay, let's go to the details!

Please note: Some of these updates do not apply to Dark Storm: VR Missions, but rather to our long term project: Dark Storm: Ascension. These differences will be noted.

In this video I demonstrate the AI nav mesh and the current test field in its first stage. Over the course of the next week, we'll add cover objects and use iit for testing patrols and AI abilities.

This video demonstrates the patrolling system we've done in UE4 porting it over. We're planning on improving it slightly with more waypoints over the next few days plus support for pre-defined focus points.

This video shows the AI Wandering/Roaming system. They will search and scourge the level . It’s their generic way of searching for the player and roaming about having being knocked off a patrol route. Roaming is almost complete. It requires some bug fixes to AI collision and more variation to some of their movement.

Moving forward from the original Dark Storm VR missions built with UDK (Unreal Development Kit) we have adopted Unreal Engine 4 which allows us a quicker workflow and improved handle over design with the additional toolset provided in the newer engine.

Furthermore the VR design has shifted from its original simplistic and minimal design to a more abstract digital world design using various voxel shapes in addition with specific light hues / patterns / and moving outlines to the VR foundations. We will be using moving blocks and environments providing a dynamic background landscape and an overall more interesting dynamic world.

As the player explores the background surroundings will move, hovering drones will fly by illuminating darker segments of the background. All the while Amber can take a moment to look at the scenery before completing her mission. 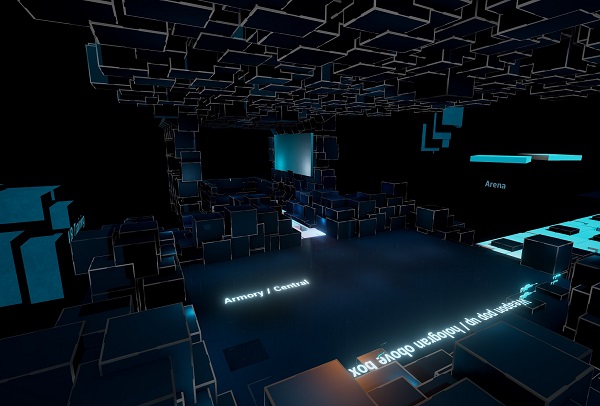 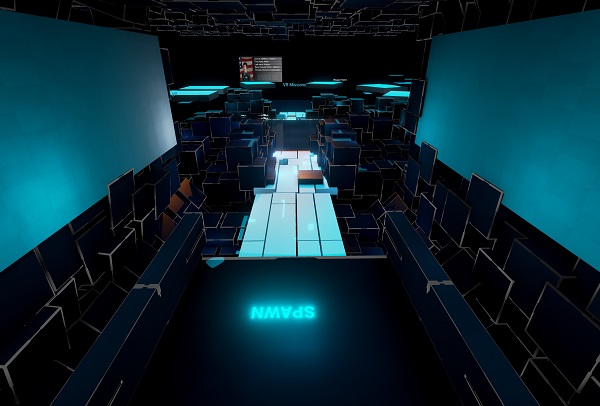 The VR Hub serves as your gateway to the VR with an armory and pathways to the VR Missions / Tutorial Missions / and Arena which will be further explained in the future.

The Hub will be accessible easily throughout your time in the game to drop out and in various scenarios.

A couple of months ago we made the decision to scrap our current rig as we we're having difficulties with it in UE4. This means that we would have to start all the animation from scratch…so I started looking into mocap, and it seemed like some other indies managed to use the kinect as a mocap device.

I decided to try it out myself, and after a few hardware upgrades to my pc and purchasing a kinect to pc cable, I managed to get a basic test in…just to see if it's worth pursuing.

Using a trial version of IPI soft, I managed to get my first test in. A bit of set up was involved before the test such as eliminating any natural light from the room ( the kinect doesn’t like that ) and adjusting the camera to fit my entire body, and I was recording in a matter of minutes.

When the recording was done, I edited it slightly to select the correct amount of frames and exported out the rig information. I replaced this soldiers reference rig to the new exported one with the animation and he started moving! To clean it up a little, I simplified his curves in maya to remove most of the jitter.

Everything seemed to work smoothly and efficiently, so in the next few weeks the animation team will be digging further into this by testing out some more complex animation and using multiple kinects for better motion readings.

To avoid throwing out all our animation and starting over, I looked for a method of transferring over the animation on our existing rig over to a new one and at the same time able to use that same method to import mocap data.

I came across the HIK tool in maya, which seemed to work flawlessly with everything we wanted. By that I mean we would be able to use this tool to create our new rig and attach it to our characters, transfer animation from our old rig to a new one (animation retargeting) and import mocap data.

Here is a quick couple of videos showcasing an early test I did using some pre-existing mocap animation from maya's library.

Our new character rig was set up using the HIK tool by telling maya which bones on our rig match up with each part of the body. After that's set, the source animation was imported in and made selectable using the drop down menu on the top left.

Here is what it looks like using a test mesh using our new rig.

Currently we are waiting on the final rig to be skinned (using this same tool) so that we can start importing our animation to this new and improved rig and get a good base going in ue4. Hopefully in the next post, we can show off some of our mocap and retargeted animation working inside the engine.

In Dark Storm: Ascension, we've been working hard on blocking out the game. The blocking phase is finished, so we're now focusing on the stealth pass of the game, adding in vents the player can use as cover. 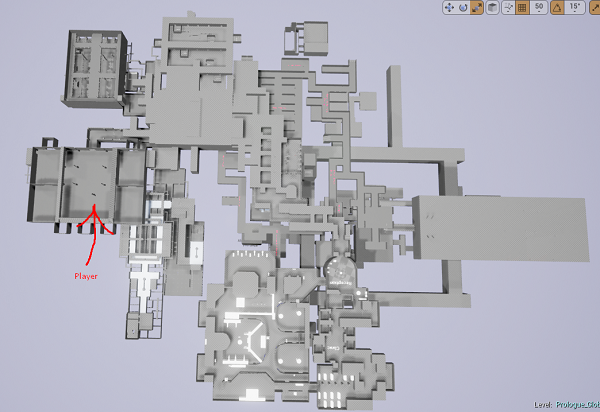 To start, I needed to block out an entire level consisting of 42 separate rooms and a network of hallways. 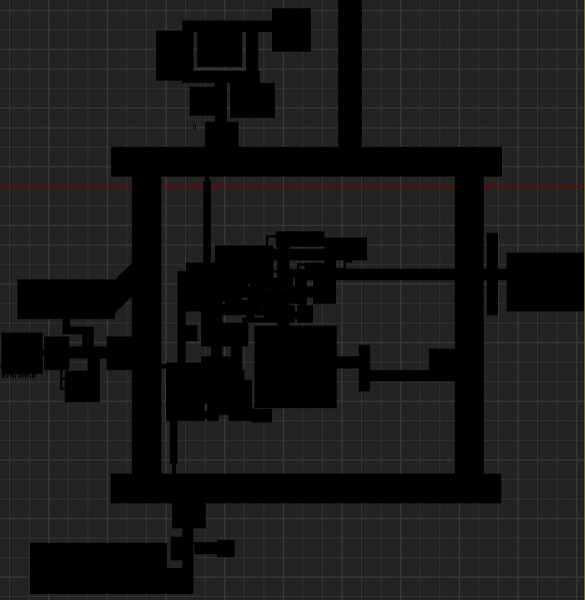 At first, I made a huge additive brush and just made the key rooms out of subtractive brushes. This helped with planning a lot since it allows you to move sections across the grid with minimal effort (one brush vs six) cutting down on processing time.

After all of that was fine tuned to the right locations, I decided to swap everything around to have a more uniform build for the game so there isn't just a huge block carved out hiding under the surface. Made all the rooms additive but hollow. This creates walls a lot easier and can still be moved around.

After all that is said and done, I created a few low poly fill in static meshes to just fill the area. This way it doesn't look so bland, boring, and empty. Made some simple props such as doors and tables. Added lights as well to allow some testing out the pacing. 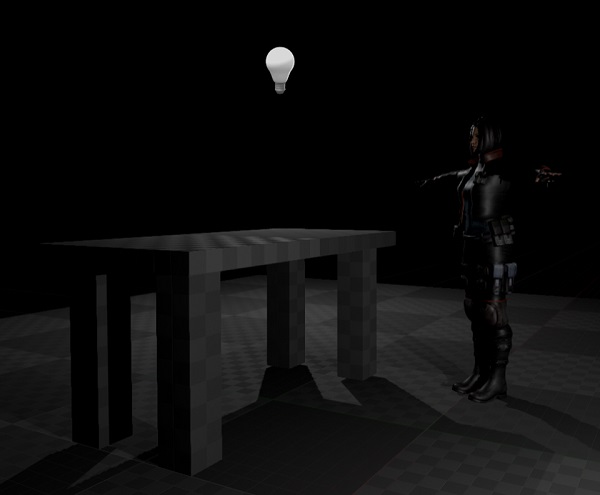 So far it takes roughly 15 minutes walking the most direct route to the end (after obtaining all the objectives needed).

In Dark Storm: Ascension, visible wounds are planned based not on combat, but the progress of the story itself. This is a feature that has been implemented in various titles that makes what the protagonist is doing a bit more believable. To a point of course :)

With this image, I am attempting to describe the damage inflicted upon Amber as the story progresses.

I have referenced each image with the storyboards so that the modellers will have a better idea of the timeline as well as when certain wounds are inflicted within the course of the game.

Sorry, we had to blur out the storyboards for obvious reasons!

After looking at hours of video, documentation, and playing around with the engine. I finally got a grasp of how sound can be implemented within Dark Storm: VR Missions and the Unreal 4 Engine.

Below is a quick video of the current sound environment for the insertion room of Dark Storm. This room consists of several probs I had to take advantage of.

For starters there are fans and pipes in the ceiling, which is rather high up. So the first step was to tweak the reverb within the room itself. It should be a loud room, but not too loud as not to drown out any future dialogue or effects.

This was utilizing reverb volumes within UE4. Which allows you to simply draw a box, and apply reverb to it. When the player character enters, the reverb is applied to all sounds within that box. This is pretty rudimentary at the start, as occlusion and distant algorithms will come in later on.

I then added extra sound cues of a simple industrial fan noise coming from various parts of the ceiling with various pitches, as well as an overall room tone ambience that sounds no matter where you are.

Next, there were those server stacks. You’d think those things are quiet, but they aren’t. The sound you get from those I actually recorded from a server stack at my current place of employment. This server stack was more a cabinet and not in a room. So it fits perfectly for this environment. The tricky part is getting the walls and floors to occlude the stacks. That is something I’m still working on.

Finally, there is the bread and butter of the room. The VR pods. This may not be final, but these are a bit more well...sci-fi sounding. Each pod hums a different pitch of tone, which makes it almost musical. I had basically just imagined each pod being configured for a certain brainwave frequency, so each one sounds different. While the servers haven’t changed much, the VR pods would’ve most definitely been the focus of the VR budget.

There are a few other sounds I can add to this room: 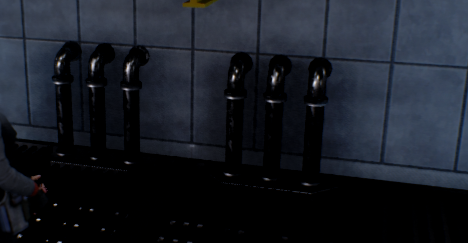 Pipes, probably just a muffled sound with a hiss. These are most likely some kind of cooling pipes.

These are trickier. Not idea what these are. Storage? More servers? Future gen consoles? Hmmm.

I also need to start sound design for the VR environment as well. That will need to stand out as that is a basis of the game. You could say I have some experience in this genre though :)

Lastly,I’m researching better tools for sound integration. For starters, I’m looking into FMOD. FMOD is kind of the sound integration tool for musicians and sound designers, as it’s built to look kind of like DAW software, with some extra parameters that are otherwise difficult to do in UE4. It also comes with integration into UE4 and a programming API for C++. This package is used by many high-end developers.

We hope you enjoyed this update! We'll be pushing more developer logs in the future.

Nice update, can't wait to see more of your progress.

Thank you! We're working hard and hope to have more updates soon. Possibly in 2 weeks.

That's nice. Also I like how the character will permanently show damage over the story, its like how "Death by Degrees" sort of did it, without the character getting healed.

Thats alot of update, looking forward to seeing this release.

Fantastic update. Really looking forward to the next one.