Post news RSS Cyberwinter story: how I started making one game and ended up with another

As part of this post, I would like to tell you what kind of metamorphoses my Cyberwinter game went through during one year, from the first outline to its working demo.

Posted by akhmedturabov on Dec 8th, 2020

Hey everyone! My name is Akhmed. I'm from Russia. I am almost 40 years old. I have a wonderful daughter and an equally wonderful wife. Game development is my hobby, for the first time I decided to publish what I do. I'm making a Cyberwinter game.

I just want to point out that GameDev is pure creativity for me. I consider it right to succumb to your creative impulses and follow them. No design docs or anything like that. I just listen to myself at every moment of my work trying to realize what should be in the game and what should not.

And of course, I am aware of how unproductive and commercially unprofitable this approach may be, but there is nothing I can do with myself. 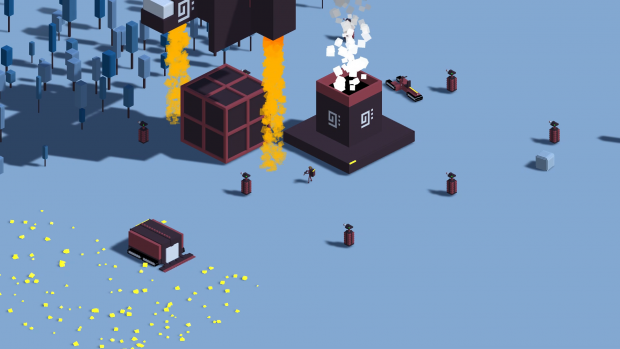 One late evening I was reading Asimov’s Academy. I vividly remember that. Unfortunately, I cannot recall the exact book of the cycle. And I thought that I really wanted to create a game set in a spaceship or spaceships. In a couple of days, I set to work. I chose the isometric camera and voxel art for a reason. As a representative of the old generation who grew up with the first Fallouts, Diablo series, and StarCraft, I have always liked this kind of games. I think I’m still not used to 3D games, although I play them from time to time. I chose voxel art because this is the only art form I am good at. I must admit, this style is also challenging for me.

I roughed out the following gameplay: the main character is a mercenary. He is a contractor, and he does the dirty work. Most tasks are related to the need to enter someone else’s spacecraft in order to steal something or kill someone. Some kind of shooter with RPG and stealth elements.

I created a level editor and added some content (walls, doors, and environment details). Then I added the main character and one type of enemy (it was an alien monster).

And here I am running around the spaceship, clicking here and there (yes, the game still had classic controls, the character ran to where you clicked), and I realize that I don’t like this. I was in a fighting mood at that moment. I just recently started replaying Diablo 3 on console, and I really liked to control the character with analog sticks. I impulsively moved all the controls to controller, and added a bunch of mobs to the map. 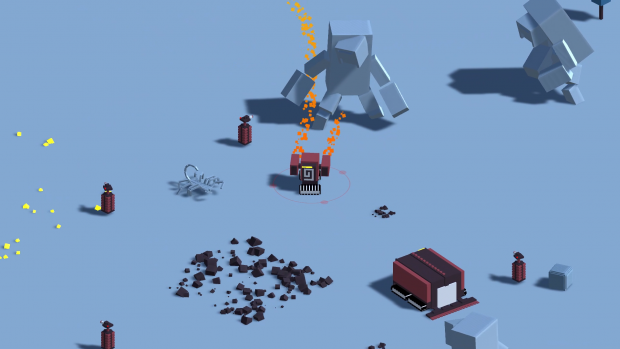 Oh yes, that was great! It took me a long time to remember what my new sensations reminded me of. It dawned on me later that this was the same joy I used to experience over and over again pouring dense fire on the hordes of various evil creatures in Serious Sam 1. Now the game that I managed to create with my own (very clumsy by the way) hands could evoke the same feeling. The awareness of this was encouraging.

While running through the level with a flamethrower at the ready and burning monsters one by one, I realized that I needed more space. In Serious Sam, battles very often took place in open areas of impressive size. I removed all the walls and doors, laid the floor throughout the entire level, and restarted the game. That changed everything! Now I felt pleasantly thrilled fighting crowds of monsters approaching from all directions, and my palms just got a bit sweaty. I knew that I made the right decision.

My next, quite predictable step was to change the location and move from the spaceship to the surface of the planet so that I could freely expand the battlegrounds. No sooner said than done. At that very moment the planet Cyberwinter was born, and the old working title of the game, “Dead Stars”, was forgotten.

Part 3. Polar station. Snow, snow, snow is all around. 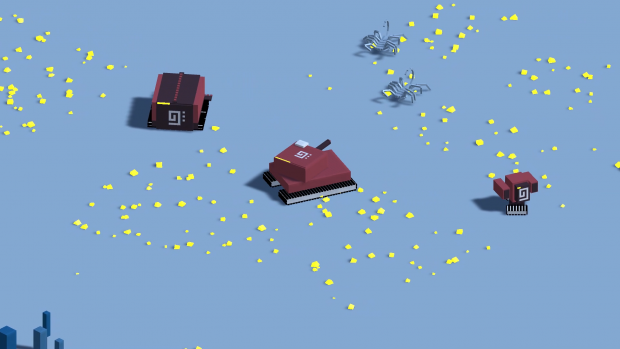 It was about the sixth month of my game development. I continued to immerse myself in the world of Cyberwinter.

From time to time, I’m looking for ideas on Pinterest, often mindlessly leafing through the news feed, waiting for some creative revelation. Leafing through, leafing through, leafing through ... stop. I see an interesting picture – a polar station, a red caterpillar truck next to it, and all this against the backdrop of an endless snow white carpet. I realized that I should add a similar truck to my game. I didn’t know if it would perform any game functions, but it had to be somewhere on the map, in the center of a snowy desert. And finally, a small caterpillar truck was right in the middle of the map, and I was running back and forth around it, fighting off monsters.

It would be great to be able to get behind the wheel of a truck like this. You could get away from a too “fat” crowd of monsters or, for example, crush smaller representatives of the hostile fauna. I thought it might be fun.

And here I am creating the truck controls, animating the tracks and rewriting the enemy AI, taking into account the new ability of the main character to get into the transport.

Rushing at high speed across the endless expanses of snow turned out to be really great! Especially when running away from a couple of golems. Scorpios were nicely crunching under the wheels, which also brought a lot of pleasant emotions.

Transport was what I needed. I decided to move on and add several more types of equipment, including combat. The Cyberwinter world looked updated. 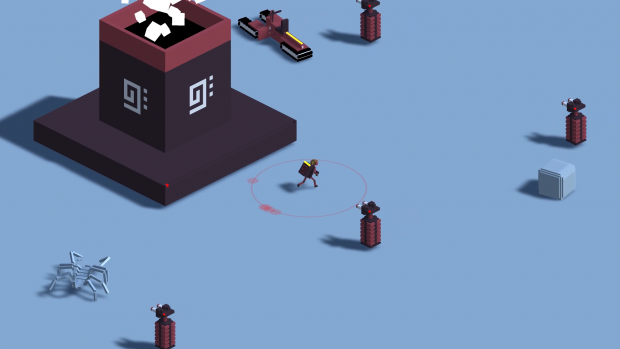 I recently became a father, and for a year or even a year and a half computer games completely left my life (in terms of playing them, of course). Sometimes I took my joystick to spend 10-20 minutes running across the map of Diablo 3 or evaluate some new indie platformer. A full-fledged gaming session was out of the question. I had very little free time. Each minute was worth its weight in gold (I’m sure parents will understand).

I missed StarCraft the most. A session in this game required as much time as I did not have. All this management, construction, protection of bases... oh... it’s an indescribable pleasure.

Thus, forced by nostalgia for the good old days, I decided to add a little construction to the game. Now the game provides an opportunity to build a terraformer and a fence of protective turrets around it. All this can be slightly upgraded. I came up with the idea of adding terraformers when I was looking for a storyline. This was how the main character gained her purpose: to find a new home for humanity and, in particular, improve the climate of Cyberwinter. By the way, terraformers are terribly annoying to local natives (snow monsters), which is why the latter are so aggressive.

The elements of strategy fit perfectly into the gameplay. I cannot convey what you feel when you manage to recapture a new-built terraformer from monsters on the last unit of HP. Or when you’re watching the upgraded turrets pour heavy fire on a golem, and he’s melting right before your eyes. OMG... I definitely like it! 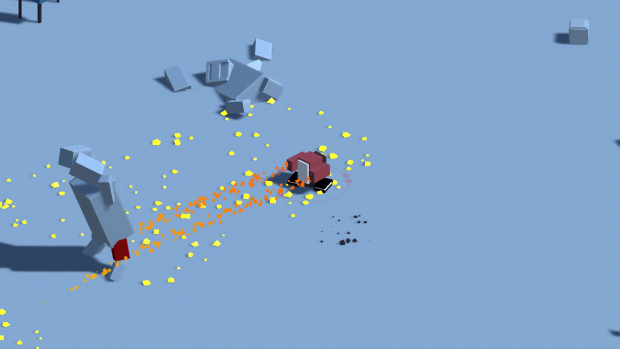 Thinking of how to present the construction of bases, I remembered about the ships. About the very ones that started it all. So, I added spaceships that played the role of freight transport. The ships delivered buildings, equipment and upgrades from orbit. Given the dynamics and complexity of the game, you often have to deploy new bases, upgrade them or change broken equipment for new, so these good-lookers will be your frequent visitors. Although, I just thought that this might be pretty annoying for someone and I need to add the opportunity to skip this beauty. ))

This was the way I went through to create my game. It is completely different from what it was a year ago, and I am no longer the same.

I have a great mixture of genres, and it is sometimes difficult for me to single out the main one... It is a strategy, an action, and even to some extent an RPG.

I applied for the winter Steam festival. It starts on February 3rd, 2021, immediately after which I’ve scheduled a release. I think I have enough time to add the latest content to the game and fix some serious bugs. I hope I can count on your help, colleagues. ) If you are interested in the game, please add it to your wish list and participate in the upcoming testing. Game page on Steam:

Thank you all very much and have a nice indie! )