A little bit of information about the next game update for Candy Sugar Kingdom.

Currently what I am working on is the Guild system so I think it is time to provide a little bit more information about it. The way the Guild system will work is that you must have a level 10 account so that you can get the quest. On the completion of the quest you will get Guild Tablet which will allow you to use it to create a Guild by entering a name for your own Guild. 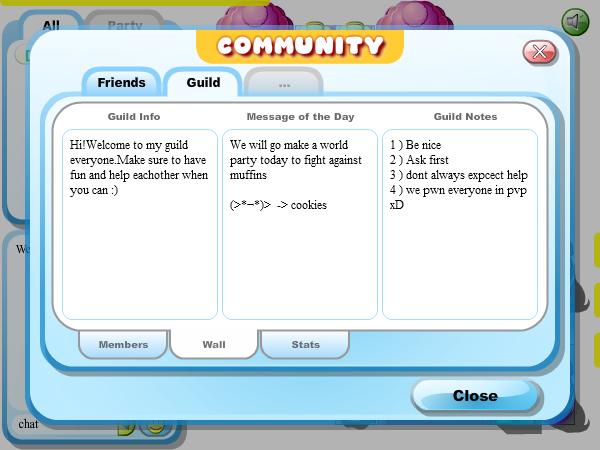 I wont go in to too much detail at this point because some of it is still being worked on and is not fully defined yet but every Guild will start from level 1 and will only allow 10 members to join the Guild at level 1. By playing in the Game rooms classic/teams or playing with your pet in the World each Guild member will contribute a small amount of Experience towards the Guild. The higher level the guild the more members and Captains it will have, the role of the Captain is similar to the Guild Master/Creator but the main role of the Captain is to lead by example and recruit more members. The higher level the Guild is the more bonus Exp and Jellybeans will be rewarded to each member while playing.

On a somewhat side note yesterday I totally broke the CSK version that I am working on and I really hate it when that happens but this one was really bad which was caused by me updating some of the applications that I use to create CSK and the applications totally messed up everything in a bad way. Nothing was working the way it should have been working and it kept on crashing, I tried to roll back to a previous version of the game but that didn't do anything and actually made it worse. So I was really unhappy about that because it wasn't really my fault but I had to deal with it even though it isn't fair to me :/ . But the good news is that I think I found the issue and managed to fix it so I only wasted about 8 hours or so of me kind of freaking out because I could not foresee an outcome due to the nature of the issue.

Some of the obvious changes that will come in the next update is that the website Leaderboards will be modified to show additional information and you will also be able to select a player Nick name to see additional information about that player like their win, tie, lose, jellybeans, costumes, pets and other stuff. One of the changes that will only effect the World is that items that are dropped will not disappear so fast like they used to, they will remain for a maximum of up to 1 full hour before they disappear.

There will also be a new command added /fullscreen which is really obvious what it will do but I just want to explain that this will not work on most websites depending on which website you play on. This will for sure work on the official CSK website but many websites intentionally do not want to allow a game to run in full screen because it is intrusive and can be abused really badly which is understandable.

So I think this covers some of the basics of Guild system and what will be in the next update, I'm not totally sure when it will be completed, tested and playable but I am definitely getting closer so as long as I don't run in to any more major issues it will be sooner than later :)