Update showing the new ship customization system and other changes.

Posted by GaldorStudios on Feb 2nd, 2013

Ship upgrades are all about choice. The goal of customization is to allow the player to not only customize ships in order to fight different enemy unit compositions, but also to customize ships based on how he wants to use them. The following examples are some of the different ships one can create. Each ship can be effective against any composition, but has its own unique style of combat. Upgrading weapon nodes requires a small amount of credits, and these upgrades can be sold when the player wants to change the cruiser, however this triggers a significant cooldown before a new weapon can be placed.


This type of cruiser has 3 different sections, each with its own specific set of upgrades.

The middle section holds the 8 main weapon nodes of the ship. Two of the available weapons (Gatling Laser: anti-fighter and Plasma Cannon: anti-frigate) can only shoot outward from that side of the ship, so unless there are enemies on both sides, only half of these weapons will be able to fire. The third weapon, the Drone Hangar, is weaker than the first two, but can attack units in 360 degrees around the ship rather than just from one side.

The front and back sections have a single upgrade node each, these upgrades can provide benefits for the ship other than raw firepower.

Back Upgrades:
- Ion Injectors: enables the "charge" ability, which briefly allows the ship to move much faster
- Repair Hangar: sends out repair drones to repair nearby ships
- Long Range Scanners: increases the range of all weapons by 20%

The idea behind these upgrades is to allow the player to customize their ships not just to counter other units, but to change the role of the cruiser, and how it's used in combat. 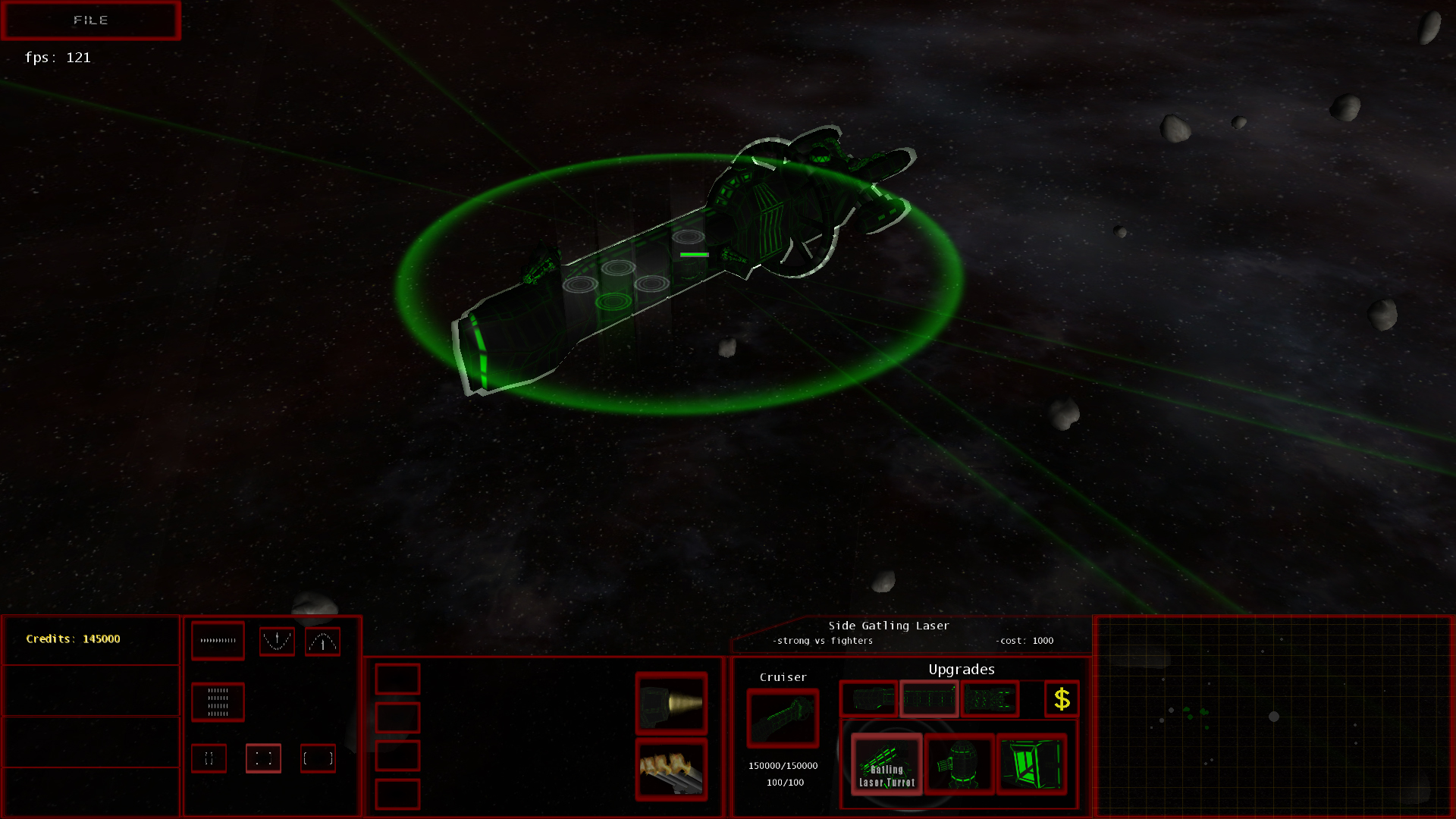 [upgrade nodes on a cruiser]

In designing the various upgrades, I planned for a few different types of roles which the cruiser could fill. The following are some of the configurations that I thought would be effective and interesting from a gameplay perspective.
--------------------------------
Sample Configuration: "Battleship"

Role: close the distance for maximum short range damageThis ship is designed to use the charge ability to get right in the middle of an enemy fleet, where both sides of the cruiser's main guns can open fire. The shield generator reduces damage during the charge, and the ion injectors enable the speed boost.
--------------------------------

In addition to the upgrade system, I've just recently added the greatly improved explosion effects, improvements to the interface, and a slew of other back end changes. I'm hoping to start posting more frequent updates as the game draws closer to an alpha release.