Posted by walternaterealities on Apr 26th, 2019 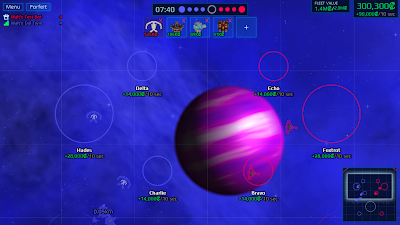 In Domination games, players vie to capture "control points". These are large, circular areas that, once captured, provide steady streams of income for the players or teams who control them. Players can then use this income to warp in new ships during the battle. Capturing more control points than your opponent will give you the upper hand to eventually defeat them.

Once neutralized, a control point can be captured and made your own simply be eliminating all enemy ships within it and defending it for a few seconds while your own ships capture it.

The purpose of this new game mode is to provide a deeper challenge that emphasizes having a variety of ship designs for different situations, that allows you the opportunity to counter the ships that the enemy uses, and that requires you to make strategic and tactical decisions during the course of the battle.

This update also has a handful of other minor improvements and fixes, which you can read about in detail in the changelog.