Cosmic Predator is an upcoming sidescrolling shooter for PC and Mac.

Steel River Games LLC is happy to announce its next project, Cosmic Predator. This side-scrolling shooter will be released late this summer and will be available for PC and Mac OS. 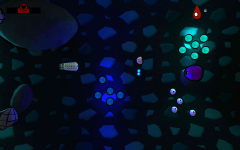 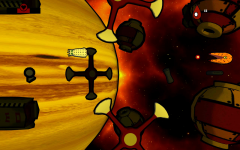 Players control the Cosmic Predator, one of the last surviving members of its species. Born in the depths of space, this monstrous squid-like creature is on a mission to recover the mysterious Life Stone to save its race from extinction. Since it’s still just a baby, the Cosmic Predator must feed continually to sustain itself. In order to replenish its ever dwindling health meter, it must drink the blood-clouds of its fallen prey.

Consuming blood also allows the player to power up his/her Cosmic Predator at the end of each stage. A defensive-minded player can focus on putting blood toward protective shields or a larger health meter, while a more aggressive player chooses abilities that increase the number of directions the Cosmic Predator can fire, or focus on obtaining a powerful charge shot. The style of the gameplay depends on the choices the player makes. And the wide variety of challenges (from squishy alien invertebrates to planet-stealing cosmic whales) ensures the player will need all the upgrades he/she can get.

The game also features a wide array of interstellar environments: galactic junkyards, floating asteroid gardens, and space-age cities. The Cosmic Predator must fight through these alien domains and more to recover the Life Stone and get revenge on the creatures who drove its species to near extinction.