Introduces Day/Night maps, Military Bases, Outbreak screen, improved gameplay mechanics and a gameplay video. Also includes the next features to be implemented in the upcoming updates.

Patch 1.36 brings with it several new features and improvements to the old mechanics. When invading a city, now there is a 40% chance that the map is at night. At night, all humans are equipped with flashlights and as the disease you have slightly limited visibility. Zombie mechanics still work the same at night as they used to in the day.

There are also Military Bases scattered over the game world now. Military Bases are occupied with soldiers only, making the process of infecting them a challenging one. Although at the moment infecting a Military Base holds no real rewards, it will make a global impact on the military strength of humanity in future updates.

There have also been some gameplay changes which greatly affect the overall experience. Zombies no longer constantly cost Virus Genes, and thus once a human has been killed the human will reanimate into a zombie on its own after a few seconds. The player can also now call for reinforcements using the TAB key, depending on the size of the Horde the player infected the city with.

Military Bases are scattered over the game world. When infecting Military Bases, you start off with 6 zombies and your entire horde as possible reinforcements. The Military Base is surrounded by trees and holds a substantial amount of soldiers. While this provides a solid challenge, on the other hand no Military Interventions can take place in the Military Base.

We are aware of some lag that might take place in the Military Base. This has already been fixed but not included in the current update. For this reason we will try to finish the next update asap. 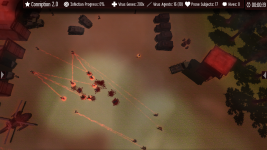 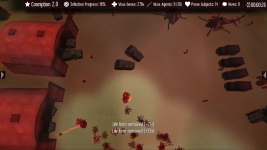 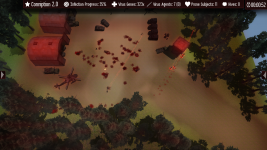 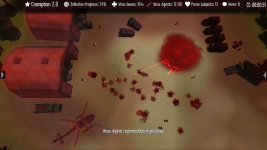 As of this update onwards, the Horde Size with which the player has decided to infect the city/Military Base with will be taken into account. The Horde Size is now shown in brackets next to the Total Infected. The player can press the TAB key and place a maximum of 20 zombies at a time onto the map, depending on how much reinforcements he has left. He may choose to spawn all of his zombies right at the start, which may lead to a fast infection but also puts his Horde at risk of airstrikes and military interventions. In the update there is no position checking for the placement of Hordes, but this has been fixed and will be included in the next update.

Zombies also no longer cost Virus Genes to maintain. This means the player is free to have as big as a horde as he chooses. In fact dead humans will reanimate automatically without needing any input from the player as the case was in older updates.

We have uploaded a new video showcasing standard gameplay as of the 1.36 update.

Expected features for the next few updates:

This brings us to the end of Patch 1.36. Until next time.