Stuart Livermore walks us through the design process for the Cherub.

Hi folks, Stuart Livermore here. As a concept artist on Shadow Heroes, I had an opportunity to help design some of the characters in the game, and today I’m going to walk you guys through the process of creating one of the characters. For the first of these, I picked The Cherub, our healer.

When I started to throw ideas out, I realized a few things about the character, foremost of which was the fact that everyone gets a vision in their heads when they hear the name. We know what a Cherub is and what one looks like, we think of Cupid, or one of those little angels that live in the corners of Renaissance art, chubby little angel children and such. I wasn’t a fan of this type of character, if for no other reason it didn’t exactly gel with the war motif our game was based around, so right off the bat I wanted to create something new. It started with a few rough sketches. 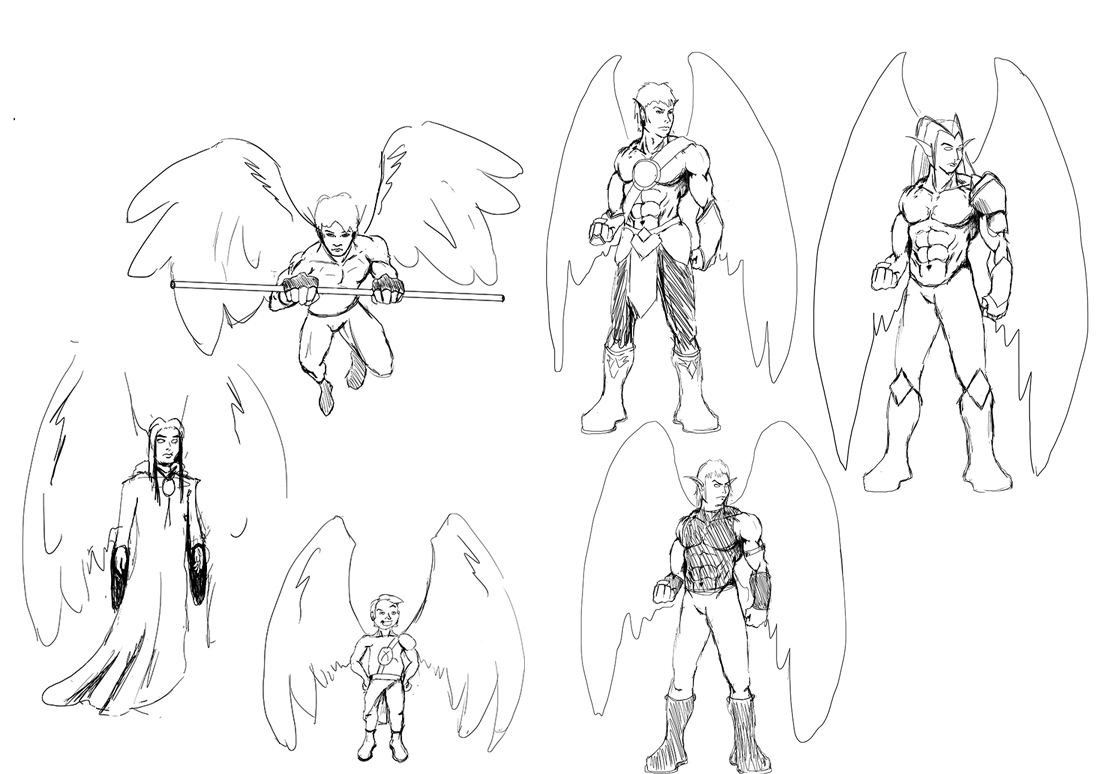 Now, these were conceived before the story was written, and all we had was a basic description of what the unit was meant to be. This next set of images were created to refine the idea a bit more and start to zero in on what the Cherub would look like. Specifically, I wanted to get away from those fluffy, angel wings. After a few different ideas, I settled on something resembling dragonfly wings.

The third image was eventually the agreed upon concept, and you’ll notice that we originally had a staff as his weapon. This was, eventually, dropped in favour of a pair of glowing gauntlets to compliment his role as a healer. 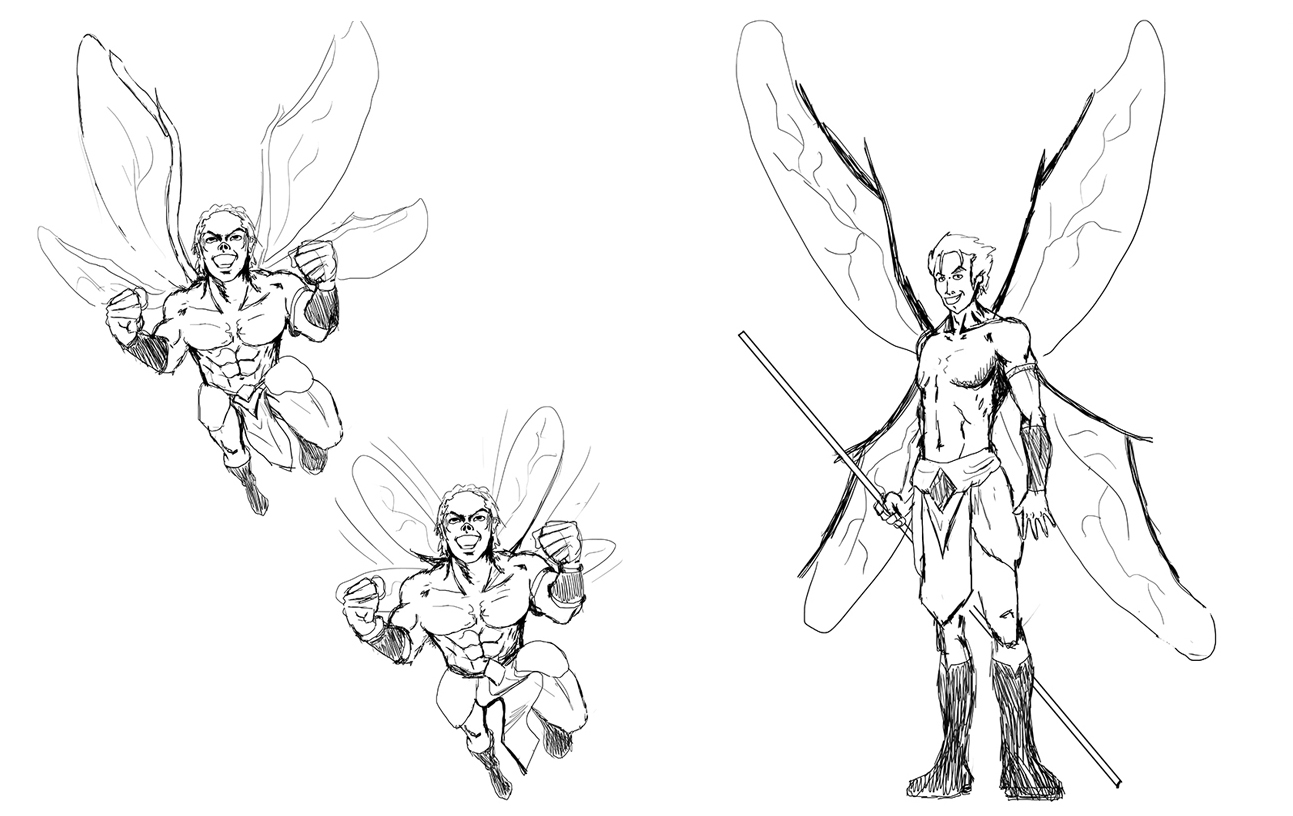 With the feel of the image fleshed out, Eric, our lead character artist took over and started to play around with some of the finer details. Things like the clothing he would be wearing was a particular focus. The character was also made less muscular and more trim to match up with his smaller stature (He is less than half the size of the rest of the characters in the game). We also tried to imbue him with a particular attitude. A kind of cockiness and arrogance to compensate for him being so small.

With this groundwork laid, Eric produced a final, full colour image. This image will be the one upon which all future production art, namely his three dimensional model and all in game art will be based. 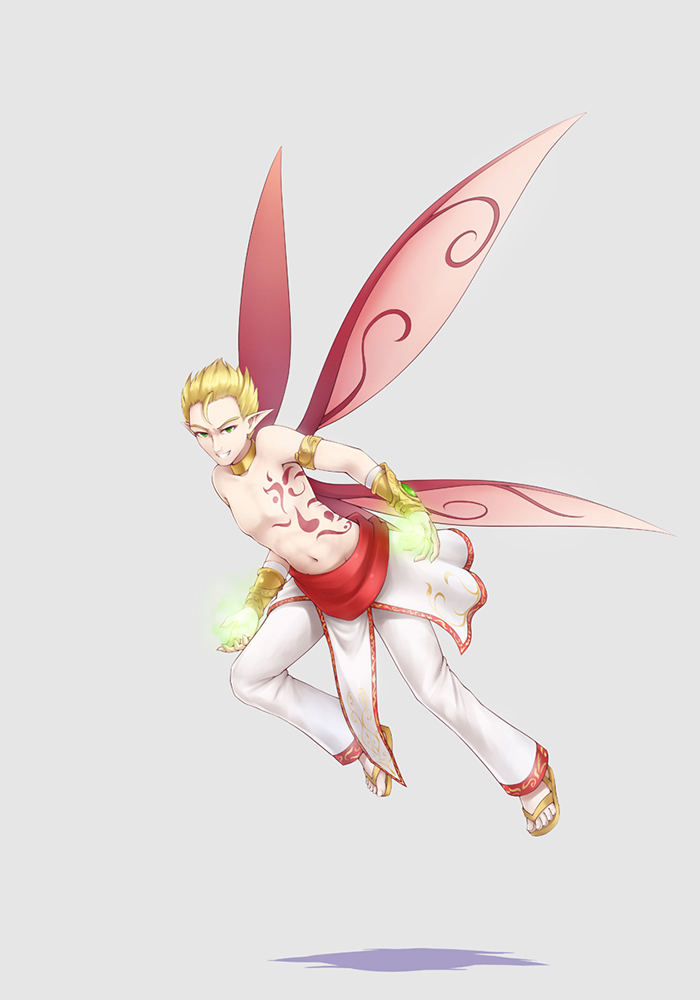 So that, essentially is how a character is brought from a rough idea to a final, composed image. We start with a bunch of ideas, and then slowly widdle it down to the final design. Look for the Cherub and all our other great characters, in Shadow Heroes: Vengeance in Flames!

Kind of, He's still one of my favorite characters though. Mostly because he can be kind of a ****.