We wanted to give a brief demonstration of combat mechanics, as this is a unique system to the CRPG world. We've had some questions on the basics, and while we'll continue to go over specific elements throughout the campaign this should act as a good starter to give you an idea of where we're headed with it. The premise is utilizing turn-based combat with simulated, timed actions. These actions can happen simultaneously, and create a more dynamic battlefield.

The core of the combat system is the combat bar, as pictured below. The combat bar shows you the players in combat and their place on the timeline. 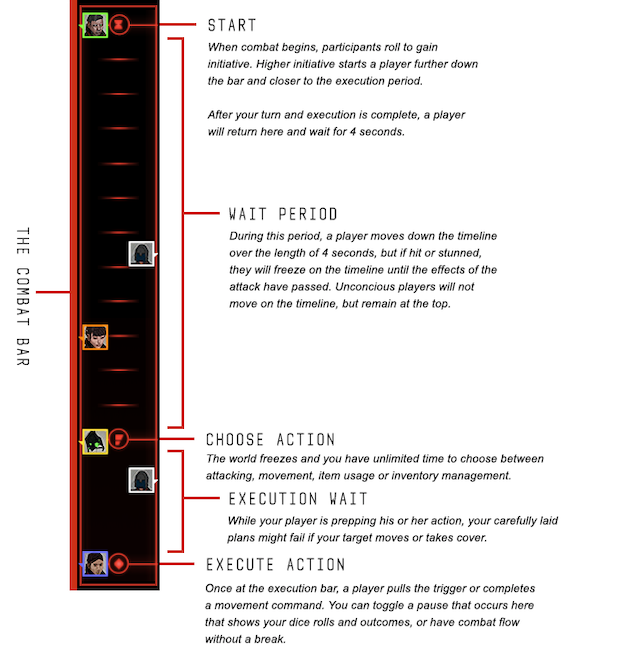 Upon joining combat, everyone rolls initiative to see where they are placed on the timeline, and then progress downward. The timeline is moving until one of your characters hits the Turn Bar. The actions of enemies are instantaneously chosen and the timeline continues without a break.

When one of your characters land on the Turn Bar, the timeline stops and they can choose an action. Once selected, that action plays out and the combat bar timeline continues.

During the execution wait time, the length of which is dependent on your action, your character is prepping their action: aiming, re-balancing for a swing, or preparing to use an item. At the Execute Bar they fire off the action, and return to the top of the timeline and resume traveling down again. If more than one action is required (like multi-shot or suppressing fire), the character is held at the action bar until complete.

Any character on the timeline can be interrupted or stalled by suppressing fire, being hit, or even by getting bio-hacked. With simultaneous actions, there can be weapon draws to see who can get their shot off first, determined by speed and a weapon's action time.

When NPCs die, they leave behind a big flesh pile that's sure to raise suspicion. To diffuse this situation it's recommended you pick up up the body and throw it somewhere. A body can also be used as a good decoy, or a perfectly acceptable d8 blunt damage roll by heaving it into enemies.