Introducing the evil eye, a device to de-clutter the game interface during combat. Replacing stats with a simple feedback and interaction device.

(scroll down for the video)

Basically the game is build on 4 basic stats for units, (health, stamina, defense and attack, each related to a resource and unit alchemy ingredient, blood, essence, bone and steel)

in the first combat iteration, I had a full unit stats interface. Which was both confusing and cluttering up the valuable mobile screenspace. After some prodding I revisited the idea and wiped away the Idea to expose the stats to a user. So I went looking for a combat feedback interface that would give enough information and control to retain a strategic approach but also was immediate and clear.

As you can see even without the unit alchemy, resource management and special abilities the interface is starting to clutter, and already confusing. 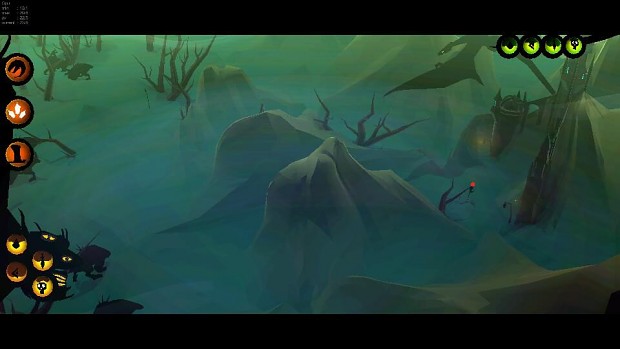 So Introducing the evil eye

These dudes look pretty confident going in. Or sneaky , who can tell yet. 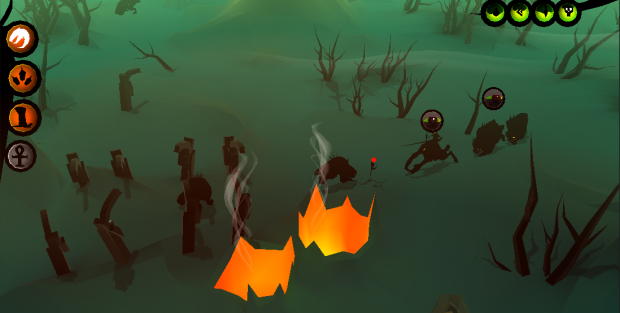 Basically the evil eye pops up on an Unit if its engaging an enemy, or being engaged. It won't tell you any stats or detail, but it will tell you if your unit is scared or confident about the looming confrontation.

On top of that the Evil Eye is a button that will retreat the unit from the engagement, and cause him to flee and abandon his squad (to fight another day).

In the future the Evil eye will also allow the player to assign special abilities to the evil eye, not just fleeing, but for instance giving the unit a beserk mode, buffing him but also draining his stamina.

Its a very very simple gameplay device, but I feel it works quite well for a mobile oriented RTS.

Got a quite a heavy squad roaming the map killing units.. At the end you'll see them running out of steam, and at the very end i retreat my remaining units.

Well.... onto unit Alchemy for the next iteration. (oooh, and yes unit death anims will be replaced by a cool effect later, not just sinking into the ground, emm working without textures here;)
Tomas

I really like the point of view, feels more visceral than most RTS with a top down view. Even with the sound on my computer off, I still imagine bones chomping and blood spattering watching the video

Thanks , thats exactly where I want it to be visceral. I always feel sort of silly when pplayig most rts games. Units slashing away for seconds when suddenly boom one unit wins. I imagine on a real medieval battlefield stuff goes a lot faster. Two guys go in and one comes out. Like a joust.

Very nice. I like the dark silhouette feel the game has. Very Grimm fairy-tale ish.
Only problem is it makes seeing which units are yours a bit of a mess.

But the idea is that you fashion your own army from the souls and resources you find in the maps.. And each soul represents a unit type. So you basically scavenge an army together..

but its a top priority to get some sort of UI fix for recognizing your units from enemy units..

Very nice! I liked the 'instant' kill battle, and how the eye would go wide open, red and 'freak out'

I have always said, don't include features that won't be cool the 1000th time you see them (Ie, long animation delays), and your combat certainly takes that point to a fine art, those animations are awesome.