In which colour-variation is added to buildings and streets; this incurs some additional work; but also leads to possible improvements; and preparations are made towards a new version of the demo

This week's screenshot shows the revised combat mechanic; while nothing here is new to the week just past, the screenshot itself is: it was taken as a replacement for the now-out-of-date screenshot being used in press-kits and on IndieDB. 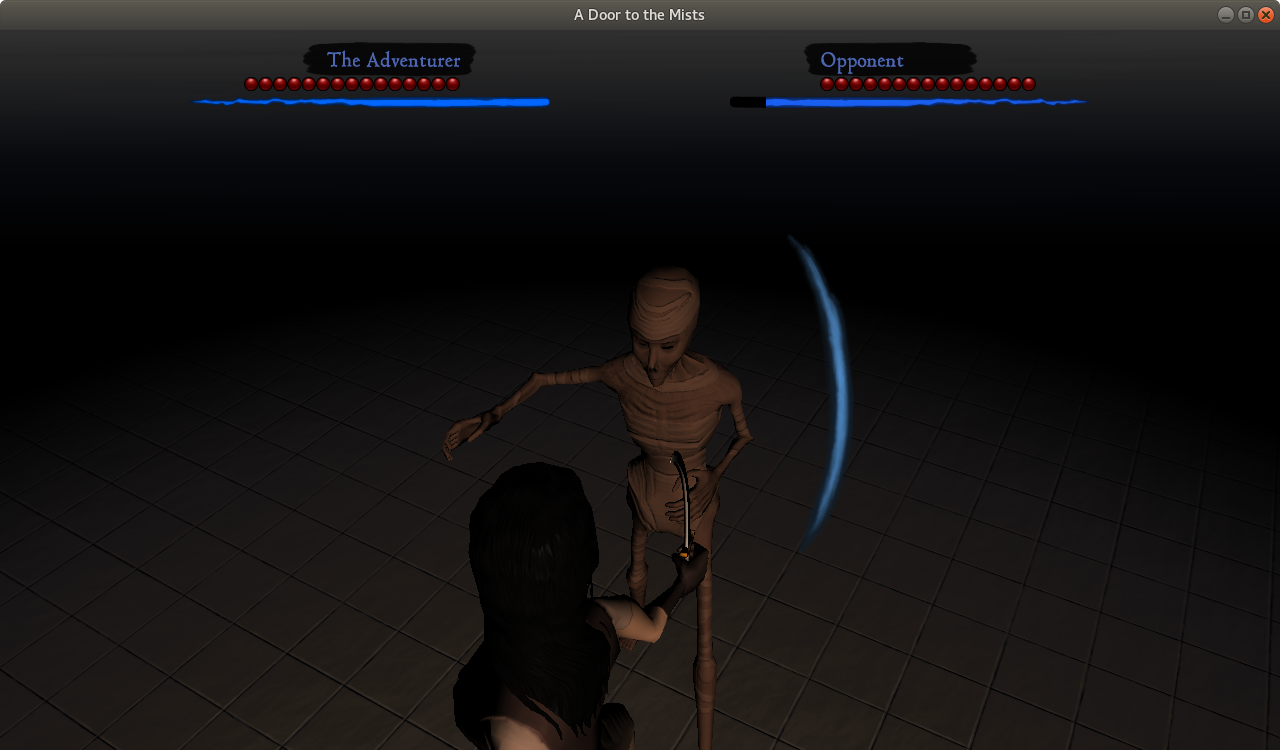 The week just past had two main thrusts, I believe: further work on level two, and preparation for the next version of the demo:

As to the level, while a variety of minor changes were made--moving a piece of graffiti, closing a hole that I discovered in the world, and so on--one change was perhaps more salient than most, and led to further changes still:

I had noticed to my dissatisfaction, and had demo-feedback to support this impression, that level two felt a little over-uniform. Part of this was perhaps the lack of things to find, something that has hopefully been ameliorated by various changes made previously. But another part, I felt, was that there was little variety in the colouring of the level: each building was the same colour as the next, and the streets ran similarly unvarying.

As I recall, I had previously experimented with methods of fixing the issue in the buildings, but had found nothing terribly satisfying.

In the week just past, however, an idea came to me that should allow me to apply a flat variation to each building, at little cost in performance, I think.

In short, I apply a colour-scale to each building, which is then interpreted by my shaders as variations in saturation and lightness.

I've tested the method, and it seems to me to be an improvement!

But there is a catch: such colour-scales propagate to child-objects, meaning that anything attached to such a building would likewise be varied. And since not all of my shaders include those same saturation and lightness features, this sometimes resulted in certain elements being unaffected, and so no longer fitting their environments.

But this is a lot of work--even with scripts to aid me--and tricky at times. I believe that I'm well into the process, but it's not yet done!

It did, however, lead me to perform some additional cleaning-up of superfluous elements in the level--things like floors inside inaccessible buildings. Hopefully this will provide a slight performance boost!

As to the streets, those on the other hand seem to be easier: with their sparse and generally-simple geometry, I can easily enough just hand-paint some variation into their vertex-colours, to be similarly interpreted by the relevant shader. Once again, I've tried this and been happy with the results. ^_^

As to preparations for the next version of the demo, I made a variety of such changes: I completed a new game-tile for use on Itch and IndieDB (although use on one site or the other may call for some cropping); I painted a new backdrop for the Itch page; I made section-headers for the game-pages; I updated the version-number applied to the game; I added a new in-game splash screen presenting my own logo; and more besides!

Here below are the backdrop and one of the section-headers:

And beyond that, a few other things were done that don't seem worth detailing here!