Preview of DSS colony station and the creative process behind its development.

The first thing to do when starting a new game in DSS is to build your colony station. This station is central to your local empire, as it will provide the work force to build and staff your other stations and ships. You will be able to train workers and pilots out of the available population. This population grows over time if you provide it with the necessary commodities such as entertainment and health care. The higher the moral and health are, the faster it grows. 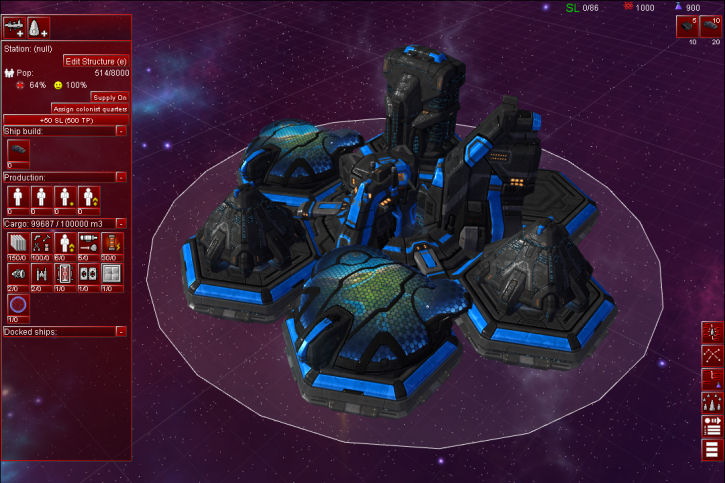 The station itself has 6 customizable district sockets. Each sockets can host a district, that has a direct effect on the station and population:

Increases the station population limit. Comes in form of a pyramid and provides quality living space.

Increases the station population limit even more. Influenced by totalitarian architecture, provides crammed living space, but comes at the price of a decrease in morale.

Provides a small moral boost. Inspired by the classic concept of a greenhouse in space, encapsulated by an atmospheric bubble. There’s a waterfall, some forest and a beach.

Several other districts are still in development, for instance: hospital will increase population health, academy will train higher tier professions, etc.Also, as you progress in the game and unlock new technologies, you will be able to expand the colony station considerably to add new district sockets. Here's a preview of how the station will grow:

So by the end of the game you should get a huge station that looks like a floating city in space. :D

The initial brief for the artist was as follows:Composed of a central hull with 6 districts and 6 expansions with 6 districts each.The central hull is ~800 meters in diameter and provides living space for colonist, basic education system and commodities to sustain a small population. There is also a corvette shipyard for tiny ships of no more than 20 meters.The city of Atlantis(from stargate atlantis) provided a rough starting point for how to lay out the colony station.

Core structures in the center and additional structures in the periphery.Additionally, a hexagonal shape was deemed as useful for the districts, because it allows for a nice, compact arrangement, without the static feel a square would have.So, the colonystation with its 6 expansions is essentially a city in space, or rather a blueprint for a city in space, because the player can build districts on it.One of the first things to do, was to figure out how to arrange the expansions and districts accordingly.

Although we are in 3D space, a planar arrangement was preferred to provide best visibility and allow to see things at a glance.

The third variant was chosen, as it is the most compact and expansions “grow” most naturally.Afterwards the central hull had to be worked out. The idea here was to have elements clearly separated by function. There should be an area for habitation, for education(training pilots, etc), a small shipyard, some part focused on engineering(life support systems, energy source etc) and finally 6 areas where a districts can be build upon. Approved was the idea of a central ring fused with 6 hexagonal platforms at the outside and three vertical structures in the middle. 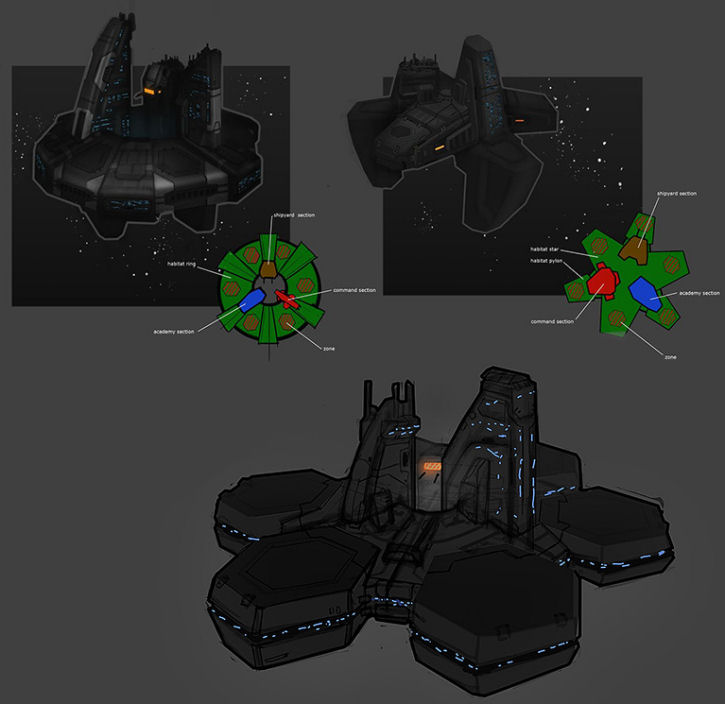 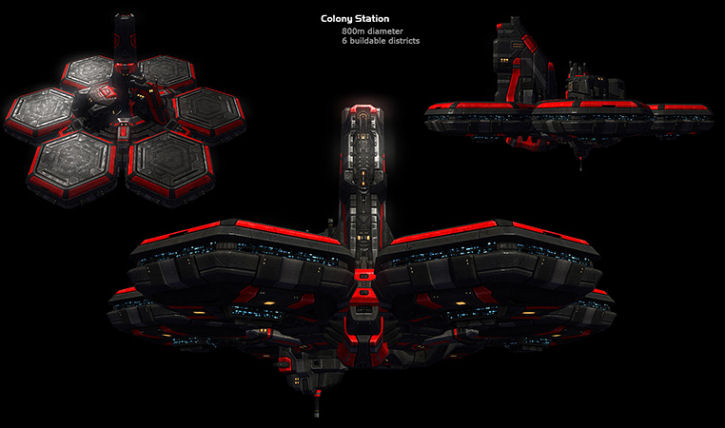 The ring and the platforms are used for habitation. The smallest tower is the shipyard. Opposite the bay opening is a medium sized tower, with elements inspired by Air Traffic Control towers. This one is also housing the education facilities. The tall, narrow structure is the engineering tower.

I really appreciate you taking the time to explain your creative process and how you incorporate these things into your game, this is awesome and I am so stoked to see more updates!

Glad you like it! It definitely cuts into development time, but exposure and engaging the audience is at least as important as having a quality product :) We have something really cool in the pipeline for next week. Stay tuned!

The first variant looks like Atlantis from SGA :O

As mentioned in the article :) Glad you like it!