With 9.2 Cogmind gets Rich Presence on Steam, an explicit colorblind option, Abominations mode improvements, yet more scoresheet updates, plus the usual bug fixes and more. 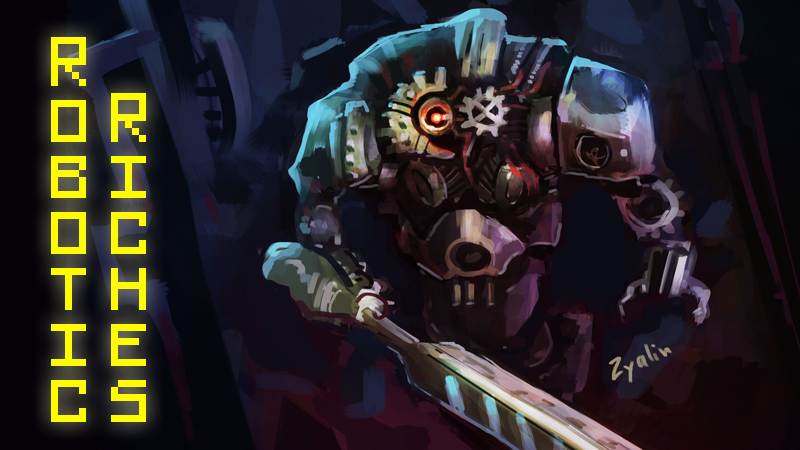 With 9.2 Cogmind gets Rich Presence on Steam, an explicit colorblind option, Abominations mode improvements, yet more scoresheet updates, plus the usual bug fixes and more.

Although a much smaller update compared to the full Beta 9, there's a fair amount of stuff in here, with good reasons to update. Release notes and sample images below!

Saves from earlier versions are incompatible with Beta 9.2, but even if you're on Steam and Cogmind automatically updates, Betas 9/9.1 are still available via their own legacy branches and you can roll back to finish a run in progress first if you like

If you play Cogmind on Steam, your friends list status will now indicate not just that you're playing, but also other information including your current build, location, and status.

Full status description while on the game over screen: 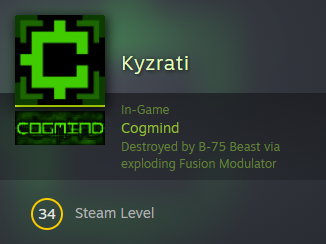 If you're not sure where these build classes and possible status levels are coming from, I talked about them in Part 3 of the Ultimate Roguelike Morgue File series, features originally developed for mid-run stat dumps. (Build classes are also available directly on the HUD by activating "showBuildType" in advanced.cfg.)

You can read a lot more about Rich Presence and its implementation on the blog. 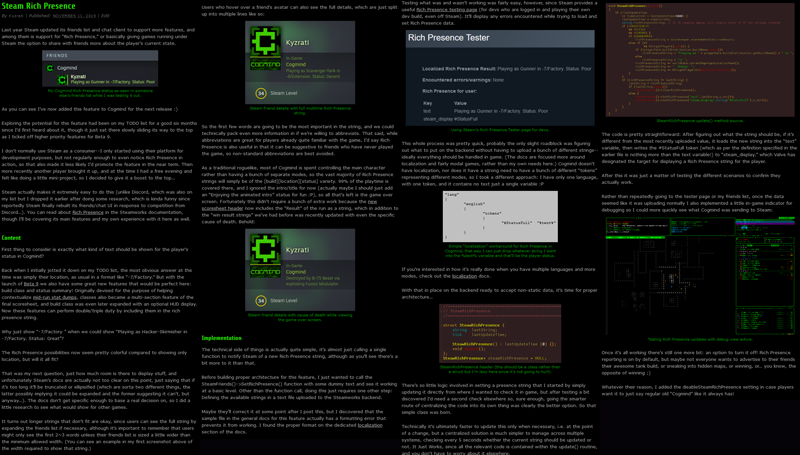 Steam Presence reporting is active by default, but can be turned off in advanced.cfg (disableSteamRichPresence).

We already have tweakable renderFilters and some players are using those to adjust Cogmind's appearance, but these are sometimes less ideal than an even more targeted solution when it comes to accessibility for colorblindness. So I built a new mode aimed at the more common types of colorblindness.

Cogmind is already designed in such a way that much information is available through channels other than color if necessary, although admittedly they won't always be as convenient, and this new mode will help greatly in that regard. The primary example is the usual green->yellow->orange->red progression for various damage indicators is not easy/possible for some to distinguish, so this mode converts a majority of the game's green to light gray, and most oranges to azure blues instead: 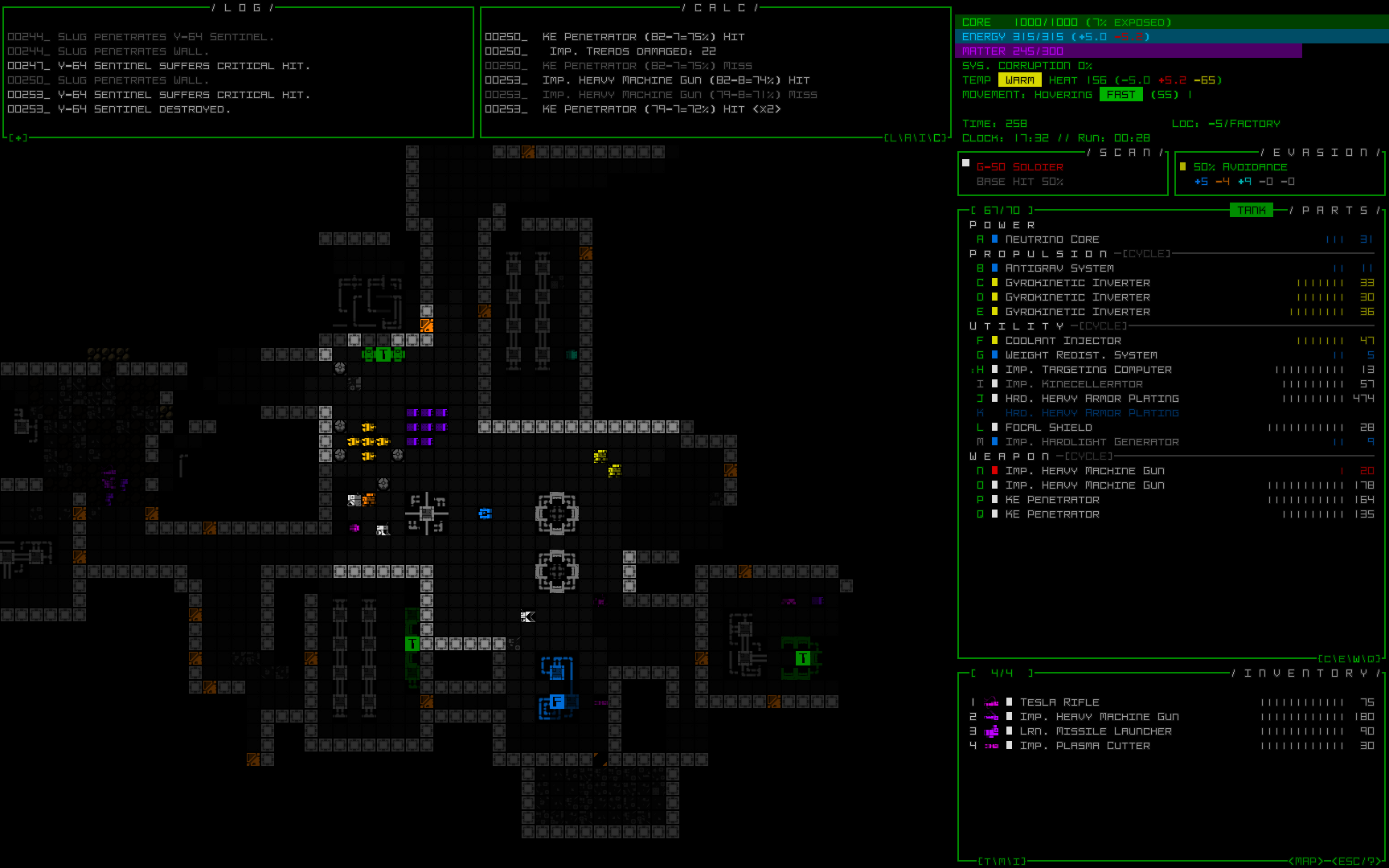 Another with some action:

So far feedback from those who need this mode has been good, although sadly the ESC/game menu doesn't appear great by default in this mode, and I can't really work around that given the architecture, so it's a case of sacrificing the appearance of a lesser-used part of the game for the much more prominent and important main interface. For some players, combining colorblind mode with a separate BRIGHTNESS filter, something like BRIGHTNESS(150) will probably help here and in other parts of the UI as well.

This new setting is available directly in the options menu under Interface, and requires a manual restart for the changes to take effect since it will programmatically alter a lot of internal game data to enable this effect. (A note for patrons who were using this mode prior to today's official 9.2 release: Due to its move from advanced.cfg into the proper options menu, you'll need to turn it on again in order to continue using it.)

Another feature originally intended as part of the colorblind setting but later split off since I imagine a lot of other players might want to use this: you can activate mapLabelsShowIntegrity to show remaining integrity next to all robot and item labels on the map. The above gif has this feature active, though note the integrity is only shown for those objects which are not at 100%.

One more bit of general brightness-related QoL is the highlightCaveinAreas advanced.cfg setting, which simply further increases the brightness of destroyed areas that might cave in.

These areas have always been highlighted in the past, but only faintly and if necessary could/can be manually brightened by holding Ctrl-Alt. They aren't set this bright by default since it could be distracting and possibly make it harder to see other important information :P

(Much) further outside accessibility territory and into "what the hell, why not?" territory, there is now a new renderFilter: INVERT.

This one doesn't take any arguments itself, but you can combine it with other filters for better effects, like inverting a low-contrast mode. For example AUTUMN|INVERT, which results in a more pastel appearance.

The extensive new scoresheets have only been in wide use for a little while, and I really like how they've turned out. Of course they also contain a huge amount of run data so uncovering more issues was inevitable :P. So far there have only been a few, now corrected for Beta 9.2.

In addition to those there have been some improvements as well, including the Movement details under the main "Cogmind" status section (amazing we've gone so long without it, although I guess it only started to seem a little more important now that you can output scoresheets in the middle of a run and some players are using that to ask others for advice).

We've also got a new style for the parts lists (Parts/Peak State), which might take a little getting used to but encodes more information into the layout, enabling faster parsing. Here's a before/after comparison of the basic list style vs. prefix-based alignment:

The Halloween Event has "ended," but as per the instructions there it's technically still accessible in game. As such, I made a few more adjustments to improve it.

Figuring out what the various anomalies really do is part of the fun, but Paradox Anomalies in particular never had any associated log messages and they could really use one when their effect helps you.

Fire Anomalies were also super deadly in the early game where you don't have much access to heat dissipation, or the slots to apply it, and although they could mostly be avoided, they were still clearly the biggest contributing factor in early floor deaths, so not very balanced. Just remember you're probably going to want some cooling come Factory, at least in reserve, and regardless of build ;)

Today's cover art is an "Abomination" by Zyalin, who does great fan art of a number of roguelikes. Check out his website for more.

Also, have a full-sized version modified with their native parts: 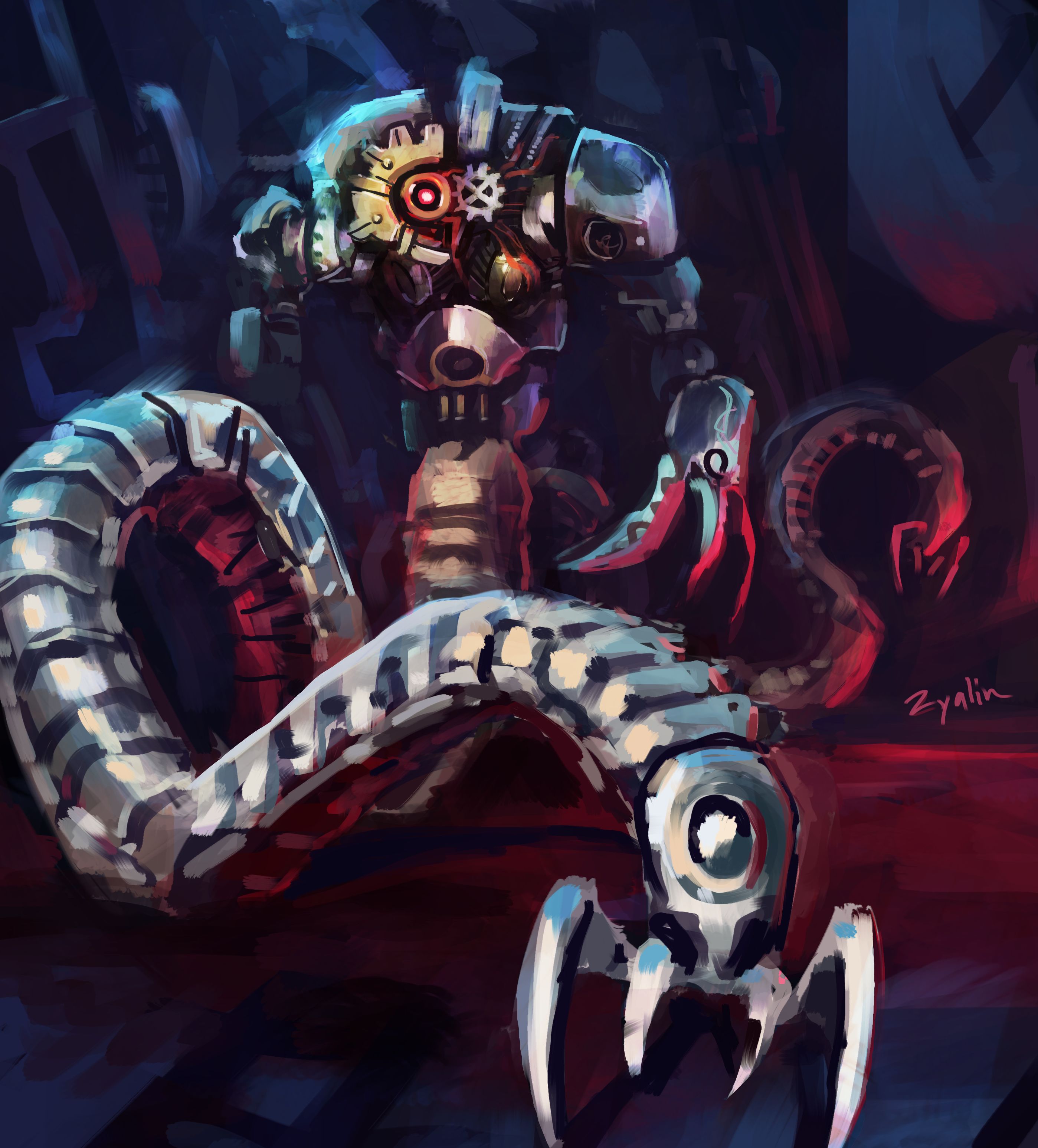 Cogmind legend Valguris has demonstrated a branchless extended win you can read about over on the forums. Very impressive, and he even managed to do it with his patented 2-prop flight build! Valguris also wrote a guide to this build, although note that particular variant does rely on branches. (Spoilers abound behind those links, of course.)

Not long after this release, around I streamed the start of a new run beginning with Beta 9.2, aiming for a heavy combat half-track build, likely based on kinetics and crit-stacking.

If you're interested in player stats, we've got a whole bunch of them from the Beta 8 cycle in this summary I put together. 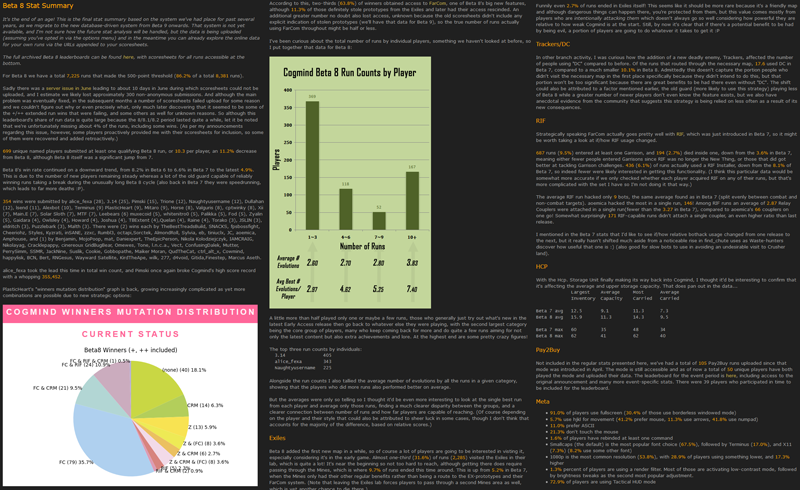 We're still waiting on the leaderboards to be completed, but again, the data is being collected for inclusion in the meantime, and once operational I'm sure they'll be more robust and feature-filled than the previous iteration. Been nice to see people sharing scoresheets via URL these weeks, though :D

That's all for this release, and thank you for the reviews! It had been ages since I asked for anyone to leave them, but now we've got a bunch of new ones and are close to the next milestone on that so thanks again :D

Nope, sorry that's not something the engine or design can do. It's a traditional terminal window approach that breaks the screen into a grid for placing characters (map, UI, and all--same grid), so the larger your screen, the larger everything is. It was developed for desktop monitors as a hardware requirement.

Changing the dimensions of the screen grid results in very different gameplay, although I did show an example of simplified gameplay on a smaller grid with my 7DRL last year, the Cogmind spin-off POLYBOT-7. Cogmind requires more cells than that.