There haven’t been client updates in the last few weeks, but we’re happy to announce a new release which brings a lot of new features. There are some bug fixes and minor updates, but there are three main new features.

As mentioned in a previous Developer Journal we’ve been working to improve what users see when logging in to the NuVera Online client as well as merge interfaces that had previously been separate and somewhat confusing.

The new destination screen is a one stop shop for everything about your places, user public places as well as NuVO places. The new interface is presented when first logging in as well as can be found by clicking the Destinations button in the top menu bar.

We’ve also spent some time updating the Knowledge Base with new tutorials covering the various sections of this new interface. 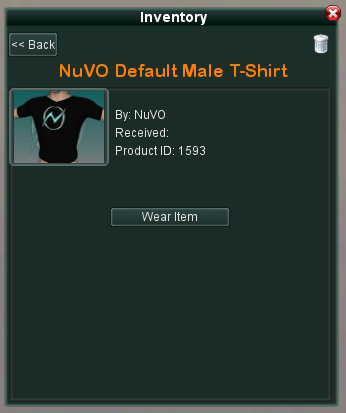 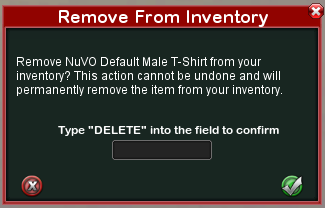 This is permanent and can not be un-done so be careful what you choose to remove. Should you decide at a later date you want that product again you will need to re-purchase the item from the catalog.

Also introduced in this update is the brand new NuVO Market. This new window can be accessed by clicking the NuVO Market button in the top menu bar in the client. At the moment the NuVO Market includes items that were previously purchasable via the retail catalog which has been replaced by this new interface. 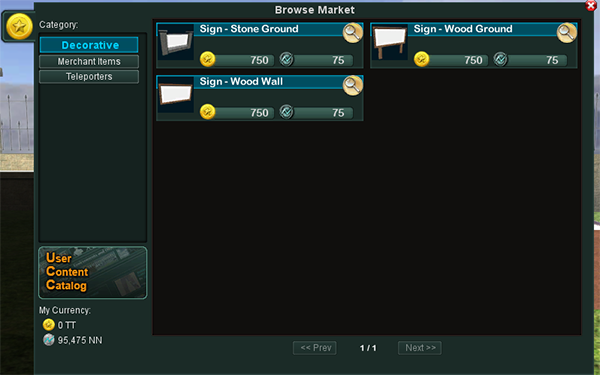 We’re always working to improve client side performance. In this new client version we’ve made some improvements to how product textures are loaded to decrease memory usage which should result in faster loading as well as better performance.

Unfortunately we had to disable the voice chat feature in the client as it was causing too much memory usage and in some cases causing client crashes even when not utilizing this feature. Once we’re able to work out the kinks we will enable it again.

We made various visual changes to the interface to make some windows look more appealing and noticeable. We will be making additional minor changes like this over time to further improve the functionality of the client interfaces.

Please read the release notes below for a full list of updates and changes.

[Interface General]
- Replaced destination screen with new places interface. Users are no longer limited to just going to one of their environments or Tutorial Island.
- Removed Go Home button from main button bar. Click Destinations and Enter Home to get back home.
- Friends List button in main bar changed to Social
- Friends List button now under Social
- Events button now under Social
- Catalog button now opens the new NuVO Market which introduces the new in world only currency called the Treasure Token.
- Catalog button renamed to NuVO Market
- User inventories have been redone to be compatible with how inventory is now stored on the server.
- Can now remove items from inventory using the trash can icon
- Clothing items can now be taken off from user inventory instead of having to right click your avatar or open the What Am I Wearing interface.
- Create Event preview window buttons changed to make more noticeable
- Look of various floating windows changed to make header/boundaries stand out more especially when overlapping another window
- Improved caching of product icons to reduce load times.

[Fixes]
- When creating an event the day drop down value won't reset to 1 when changing other values
- Create Event preview card correctly expands to show more info when info button is clicked
- NPC dialog text no longer cut off on last line of text.
- Performance improvements to Sunset Isle
- When applying an avatar title it no longer appears above your own avatars head and in the wrong direction/style
- In some cases the recall retail item button would remove additional retail items of the same type. For example recalling a regular ATM would also recall other ATM variations (FMX/Evil Credits)