A few bug fixes and some tweaks and additions while we work on some larger projects.

This week we've addressed some various requests and bug fixes. We have some bigger projects being worked on, but didn't quite get it done for this weeks release.

We are working on a new in client mailbox system that we should have done soon that is a great new way to communicate with your friends in world. Here is a screenshot of how it's shaping up so far. 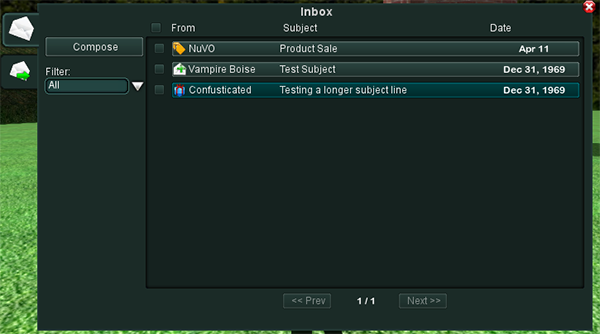 Expect a release of the new mailbox system very soon. In the mean time take a look at the release notes for more information about we we did get done.

- If in decorate mode the currently selected object is no longer highlighted.

- Changed the default and available values for Shadow Distance in advanced graphics options. Default value and range increased to allow for visible real time shadows at a longer distance away.

- Fixed issue with not stopping at water surface when swimming up, but instead swimming just past the water and then dropping back down.