My thoughts on how I implement synergy between the three current classes: Barbarian, Sorcerer and Cleric.

Taking two seconds to think about it, my understanding of synergy is this:

When two entities interact to produce something cool or interesting.

Google yields this definition which is a bit more formal:

The interaction or cooperation of two or more organizations, substances, or other agents to produce a combined effect greater than the sum of their separate effects.

I love this idea and think it brings a lot to games.

So how can I get that feeling into my game? Hm. Let's have a look at what I have so far to see if I have any and how I can improve it!

Search for Synergy in Classes

As you level up in Jaggy Battles, you can choose Skills from 3 different Skill Trees: Barbarian, Sorcerer and Cleric. If you want, you can go balls-to-the-wall Barbarian and that certainly works. But I want mixing up the Skill Trees to be viable as well. To make this interesting and fun, they have to have synergy.

Let's take a look at the Barbarian and Cleric hybrid - the Fanatic. 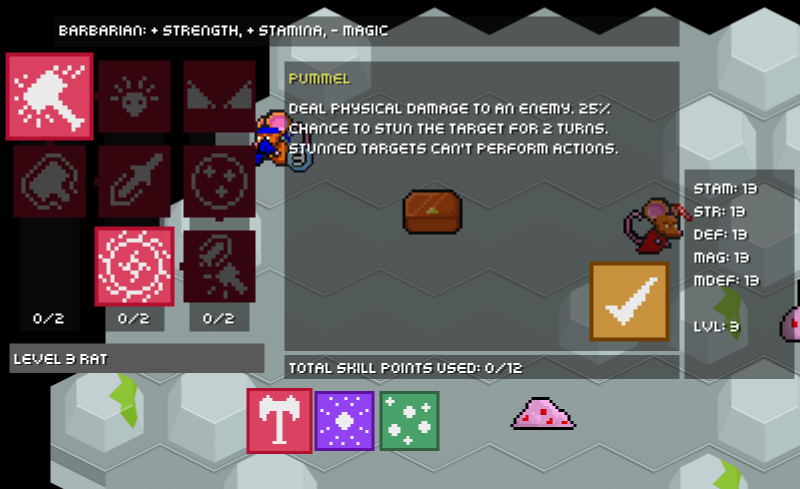 The staple of any Barbarian!

So this means by taking a Light's Justice from the Cleric Tree, we increase Pummel's power by making it deal 30% more damage to something else. Great!

Another example of synergy I tried to implement is between the Sorcerer and Cleric. Mixing these gives you the class title of Wizard.

Well at first glance there seems to be natural synergy because whenever you take a Skill in either Tree you get a bonus to Magic. Great! Because the Cleric Tree has healing capabilities and the Sorcerer Tree doesn't, you get more general survivability at the cost of being weaker to Physical Attacks.

Hm ok but this seems more like apple and oranges than real synergy.. So let's have a look at some Skills.

So if we take these Skills and are about to die, we'll create a Shield and reflect that damage back at our attacker instead. Maybe that will destroy them and we can live another day!

Sadly, the Shaman (Barbarian and Sorcerer hybrid) lacks anything like that. This is because Barbarians gain +Strength and -Magic while Sorcerers get -Strength and +Magic. They cancel each other out! This means every ability you use will always deal mediocre damage, whether it be a Physical Attack that uses Strength or a Magical one that uses Magic.

It's something that's been on my mind the last couple of builds so lets have a look at some options to improve it and make it viable.

The first idea I had was to add a Skill to the Barbarian Skill Tree which effectively band-aids this problem.

But this isn't very exciting, nor does it interact with anything.

We already have this Barbarian Skill:

So let's explore that idea some more.

I like this much better! Pummel has a 25% chance to Stun so whenever we Stun with it we're given a choice: use Pummel again or a more powerful Sorcerer Skill! I think this added choice could work!

There's still much more I could do to add interesting choices like this one but I hope you enjoyed going through my reasonings and thoughts! Next time I'm going to continue with synergy and look at the Items and Blessings I added in Build 12. Thanks for reading!