Information about the abilities available to 'Primary Commanders', which includes 6 of the 30 Character Classes in Brunelleschi 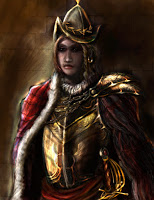 The Commander Lord is a Primary-Commander and Secondary-Lord. Therefore they can only access the primary Commander chain and has special access to the Lord Abilities chain. These valiant lords know that they were born to lead troops into combat as much as to hold seats of office. No Commander Lord starts a fearsome warrior with a General's rank. They start out with guard duty and practice bruises like everyone else. 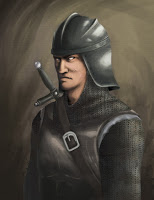 The Soldier Hero does nothing but combat and service. Both a Primary and Secondary Commander, the Soldier has access to both Commander Ability chains. The Soldier Hero knows they were born to fight and lead. They aren't confused or side-tracked with the goals of other classes such as saving souls or collecting material goods. The Soldier pursues skill in combat and command authority over NPC units above all other things and, if they reach a high level, can be the strongest combatant in the game. 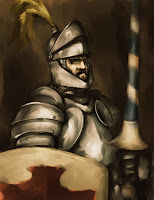 The Cavalier Hero is a Commander first and a Noble second. Whether honorable or Rapscallions, the Cavaliers are the horse riding noble young warriors or yore. The Noble emphasis both on service and battle in the Renaissance members of this class common and can be spotted galloping around at each other in times of inconvenient peace. For every level of combat skill the Cavalier gains, they also become more charming and gain abilities that will bring them power in court as well as on the battle field. 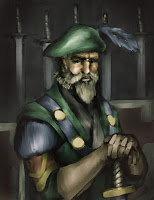 The Quartermaster is the Commander-Trader hero. This Hero works hard to stay in fighting shape but gained their class position and reputation by always remembering that armies run on boot leather and full stomachs. Should comrades in arms find themselves needing food, boot laces or spare weapons they need only to ask their nearest Quartermaster. If the Hero doesn't have one, they'll know how to get it. As their combat experience grows, so too do their battle-field merchant abilities. 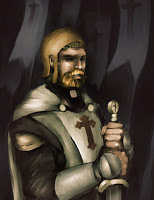 The Chaplain is a Primary-Commander and Secondary-Clergy. With sword in one hand and the Holy Book in the other, the Chaplain splits their devotion between service to their Settlement and the saving of souls. The Chaplain Hero finds every opportunity in their bloody profession to lead their fellow warriors in prayer, and to say small prayers over the fallen. Troops on the battle field finds deep comfort in a Chaplain's presence. Unlike most clergy, they will not need to be protected while they provide support for the morale and faith of their comrades. 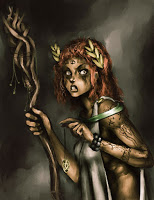 The Oracle may sing spells and mix herbs, but you don't want to sneak up on one of these wily Commander-Casters. The Oracle Hero has an edge on all other warriors but their mirror-class the Forester. This vicious fighter has spent long days alone in the wilderness, communing with the Fey and natural spirits in order to learn their magic craft. This hero has never forgotten that life is brutal and every level they gain is two-fold combat and magic so they are always prepared for the next surprise.

Recruit Peasant
The first action a Primary Commander gains apart from all other new characters is Recruit Peasant. In this the Commander inspires 1 currently unemployed Peasant from the population to join the District Garrison. This is considered a good move by friendly Settlements and increases district Security for a time.

Patrol Settlement
Much of a warrior's life is walking patrol. The second ability a Primary Commander earns is the action Patrol Settlement. It's a long walk, but it's worth it. Each character on patrol adds a stacking bonus to settlement Security and improves the chance of catching any nefarious acts being performed within the city limits.

As a Primary Commander gains in level and experience, they begin to appreciate the importance of fortified defenses and learn how to improve them. This action allows a character to spend some time and building materials on drastically raising the defense rating of a district for a full upkeep cycle.

Enhance Security
As primarily Commander classes become comfortable as warriors and soldiers, they begin to be a force unto themselves. Wherever they choose to call home becomes inherently more Secure with them around. People just don't want to start trouble with such an imposing badass nearby.

Equip Hound
Finally you have become so skilled at caring for yourself, your weapons, your gear and your affairs that you can take on the responsibility of a personal Hound. These loyal companions must be specially trained from simple guard-creatures trained in the local kennels. These must be crafted with the care of Equipment and are available at Emporiums, Department Stores and Steam Plants. Living and working with your Hound daily improves your Celerity and Might attributes, based on the rank quality of your animal companion.

Train Troops I
You have been trying to be a Commander long enough to gained some Command ability other than plucking peasants from idleness. Now your focused instruction can increase the training speed of quality troops. You have good reason to train them well. Some of these garrison troops may eventually join your personal army.

Organize Storage II
All Commanders, when they reach a certain age, come to understand the storage-dynamics. At this points they gain access to the Organize Storage action and can spend a number of their now-copious action points to increase their storage % for the rest of the day.

Oversee Construction
Your experience commanding soldiers has crossed over into an overseeer's skill. When you want a construction job done quickly, you know how to get it done. All it takes is one delivery of additional Boards, Bricks and Canvas and strong commanding voice. Workers almost jump to attention when you enter a construction site.

Casus Belli
Troops have become used to following you into battle. You no longer need the approval of your Sovereign or Settlement to start a war. If you tell the troops there's a war on and lead them to attack a foreign Settlement, they will follow you. This manifests in the action of Casus Belli, earned by dedicated Primary Commanders. With this action you can initiate an Assault scenario without having first declared war.

Equip Tattoo
Your body and temperament are hardened and your ability to resist pain goes well beyond the light sting of the tattooist's needle. This mark depicts who you are, and what you've been through. It may include symbolic references to battles you've fought in or perhaps simply be a fearsome declaration to your enemies.

Levy Troops
No longer need you recruit only one peasant at a time! You have gained the ability to inspire groups to mobs of peasants into picking up arms and becoming the lowest level peasant troops. In fact, the peasants you recruit have already been training with weapons in their spare time and will become Spearmen, Churls, Archers and Slingers as they take up arms to join your service.

Equip Bodyguard
Your skill as a Commander has earned you a great deal of respect among the other warriors. Few would feel ashamed to serve at your side and protect your back while you make far larger decisions on war and perhaps politics. Bodyguards can be hired at higher end establishments and occasionally encountered in the wild and persuaded to join your service.

Vae Victus
This action, gained late in your quest for glory and levels, is a truly bloody choice. Many Commanders will never have the chance to use it, few will have the stomach when they do. To perform the Vae Victus action, a high level Primary Commander must first live in a Settlement that has currently has a conquered district of another Settlement. The Commander can then choose to outright murder a large percent of the population of that district in return for as many Silver Thalers as lives taken.

Equip Belt
An accomplished and skilled Primary Caster eventually earns the right to wear a personalized belt along with their uniform and standard gear. Each Belt provides a bonus to your Might and Toughness attributes. The strength of that bonus depends on the rank of the Belt you have equipped. Belts can be purchased anywhere Accessories are crafted and sold and can be acquired occasionally through Actions and Scenarios.

Pillage
Really scary Commanders gain the ability to target and make trouble for enemy districts. In order to use the Pillage action, first you have to get your troops good and Drunk with several large barrels of Beer. However, taking the action doesn't simply assume that you've knocked over some villagers and taken their cash. No, the action simply activates the Pillage scenario, which you (with the help of your Settlement) then must win in order to receive your loot. If you do win the Scenario, you get to loot a large portion of the district's Treasury and a small portion of the enemy Settlement's treasury. If the defenders manage to repel you, all attacker Troops are lost.

Equip Manual
You have become so skilled as a Commander that most local events have stopped offering you new insights into superior combat and leadership. You have gained the ability to learn from the experiences of others and have begun seeking a few good military Manuals to guide your growth as a Primary Commander. These books can be purchased anywhere Book Accessories are printed. Each Manual a rank-defined ability to improve your Celerity and Management attributes. These historical martial guides include real titles such as the Anabasis Alexandri and The Book of Five Rings.

Martial Law
When a Primary Commander has hit the highest possible level of power (1000), they become able to lock down an entire District by themselves. It takes all day (a lot of AP) and a few helpful hounds, but with this action these truly impressive Commanders can put one of their home Settlement's districts under Marital Law. Everyone is watched, every shipment is sniffed by hounds, and every entry and exit is recorded. This results in 100% Security rating in that district for the entire day this action is active.