Post news RSS City of Steam Content Dev Journal - Who is That Mob and What Does it Do?

Love yourselves some mobs? Check out our latest Dev Journal on the Bestiary!

This is a repost from City of Staem Content Dev Journals

It’s been a while since our last dev journal, it was the one about the changing of the guards… remember that? Well, that’s all going to change, for the foreseeable future there is going to be a veritable heap of dev journals, expect four to go up before Chinese New Year (Feb 10th) and us trying to keep up that pace for at least a while. Exciting!

We all want to know what we’re up against, be it big, small, deadly and/or cute (the cute ones always lure you into a false sense of security…smart). This is often pretty clear from information available in the game itself. When you encounter a lizard guy called Orbolg Foreman that is carrying around a big mace, he’s probably going to hit you with it… pretty hard. Only after nearly dying (or even kicking the bucket) because you didn’t think he’d be THAT dangerous, do you really start getting a sense of what you’re dealing with.

What you might not know, however, is how he fits into the world and how he works together with his other Orbolg comrades; this is where the Bestiary comes in pretty handy. Now, before you start randomly clicking around in the Bestiary, try on the blue “Species” button, first! Now scroll down a little until you see this: 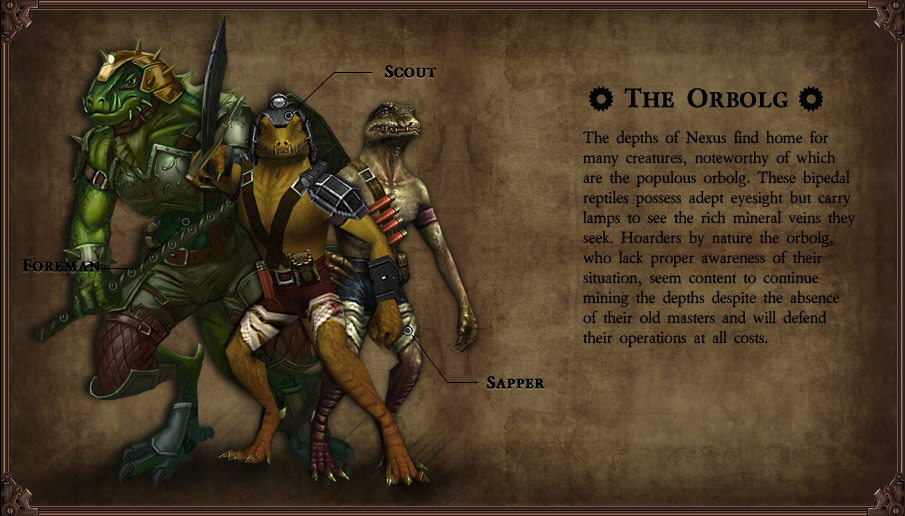 After reading the entry, you now know that Orbolgs are miners by nature and are a rather greedy bunch. They come from the depths below (where else?) and are kind of dumb. If you dig deeper (get it?) by clicking on the picture you’ll learn that the Foreman is basically the leader of the bunch (um…surprise?) and is the strongest guy around (in abandoned mines, anyway…). Scouts act as guards and Sappers are basically just lizardy off-their-rockers Crazy Ivan types that throw dynamite at you in a barely stable mineshaft. Fun!

Now that you know this you are much better prepared to fight them, aren’t you? (You’ll probably die only 7 times instead of 12 now!) What we’re trying to do with the Bestiary is to give you an out-of-game information pool that allows you to prepare for your coming battles against the creatures of Nexus and to give you an idea of what place they have in the world and its lore, and of course for bragging rights when you boast to your friends about your encyclopedic knowledge of CoS mobs.

So now you know what the Bestiary does and how it helps you on your wanton killing sprees, let’s get familiar with the Bestiary itself. When you go to the Bestiary (in the site’s “Gameplay” menu), you see this: 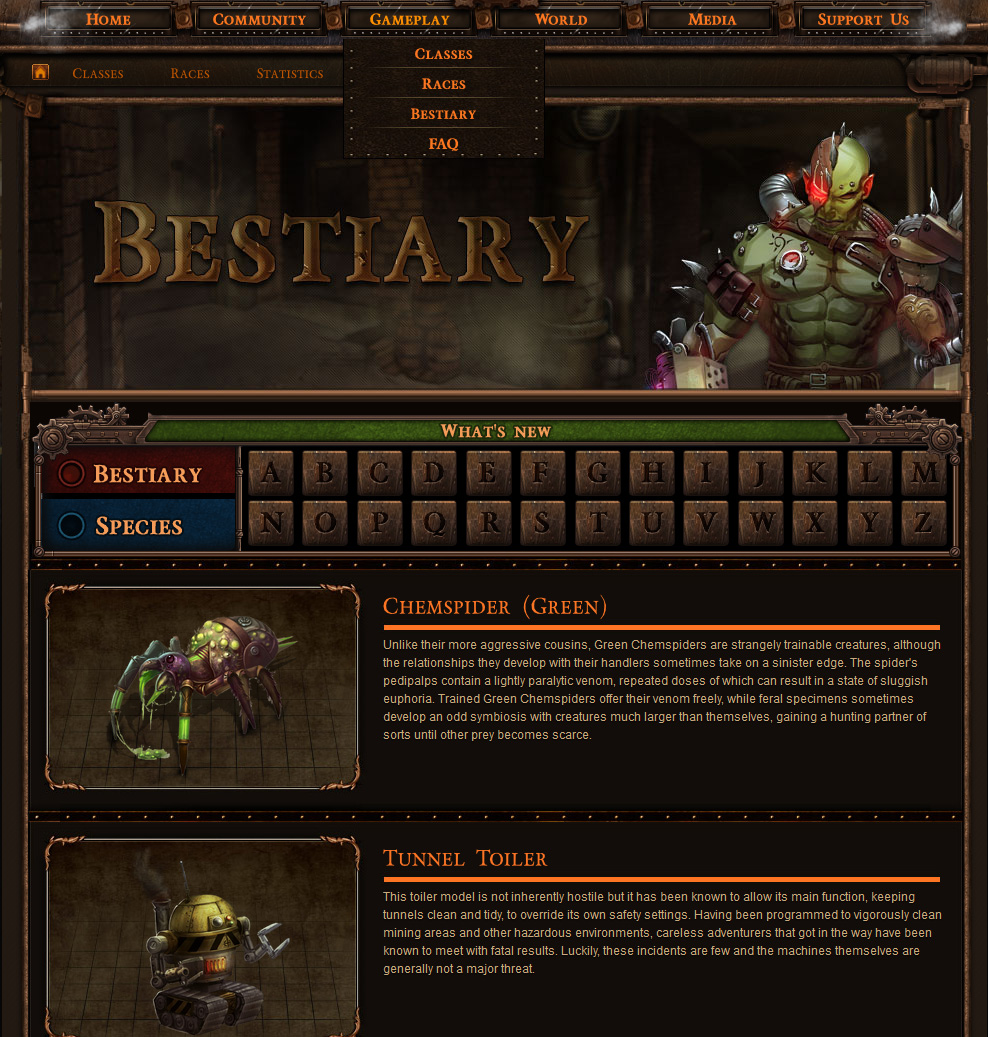 You have a choice between “Bestiary” and “Species”; “Bestiary” is for individualcreatures, and “Species” details the “families” (like Grinders). In the Bestiary, you can also search by first letter (great for CoS related Trivia!).

We’ve been back at updating the Bestiary lately, so don’t hate us if you encounter any mistakes or bugs, just tell us about it in the forums and we’ll fix it! If you have any requests for a missing mob to get featured, please ask tell us in that thread as well.

Well, that’s it for today! Stay tuned for more in the near future, next dev journal should be something “colossal”!