Last year sure was something but we’ve finally made it to 2021.
Hopefully this year will be much better than last year which should be the case for this game as it’s getting better than it was a few months ago.

I’ll be honest, I’ve been taking longer breaks than usual because of the holiday season so I didn’t really get much done in the past couple of weeks but that doesn’t mean I didn’t have anything to show off last month because I still had enough content that was yet to be shown at the time. So here’s one of the additions I made to this game: 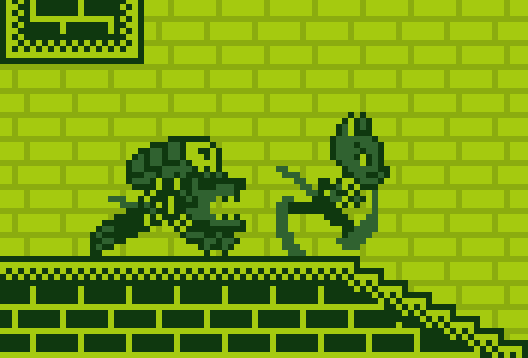 If you’ve read the October devlog or the Tweet I made during that month, I introduced two new enemies: The Parasitic Mindflea and The Mind-Controlled Huskat.
The latter is the result of a poor feline being captured by a mindflea.
But cats aren’t the only folks who can lose their minds, dog folks can too.

Huskogs behave differently to Huskats. Instead of scratching anyone close by, they’ll charge at people to chomp them instead.
They’re quite fast so it’s best to jump over them instead of running away from them as they won’t stop charging until they crash into a wall. 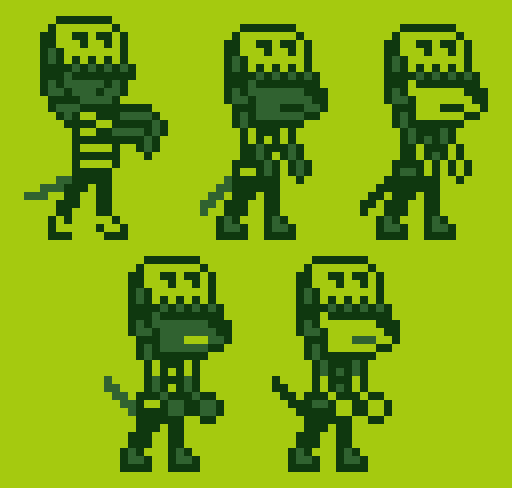 Currently, their fur colour is just as dark as Huskats but I’m afraid people may mistake them for Huskats (seen on top left) and vice versa since they both look similar so I’m thinking of changing Huskog’s fur colour to a brighter colour to help make the Huskogs more distinguishable to the Huskats. Their clenching teeth may look off though which is why I hesitated but I might as well.

Because every shooter should have a shotgun, right?
The Shockgun is the sixth weapon of the upcoming demo that shoots out lightning bolts which fries enemies. Each projectile has its own direction, speed and damage.

This weapon is interesting in that I had to draw five sets of sprites of the player character, Lizzy, shooting and pumping the Shockgun including the standing, aiming up, crouching, moving, and moving while aiming up variants.

I really like how the animations play out in the game and I think the sound effects sound punchy enough.
I went lazy with the airborne animation however since the player can shoot the Shockgun in eight directions while airborne so there’s no animation for the “shooting” part.

This weapon was supposed to be the seventh weapon that can be acquired normally by progression but for the sake of the future demo where there's only going to be two stages and the third weapon, the Zapper, becomes an unlockable as originally intended, I might have the Shockgun be acquired as a hidden weapon instead (or unlocked by cheats). 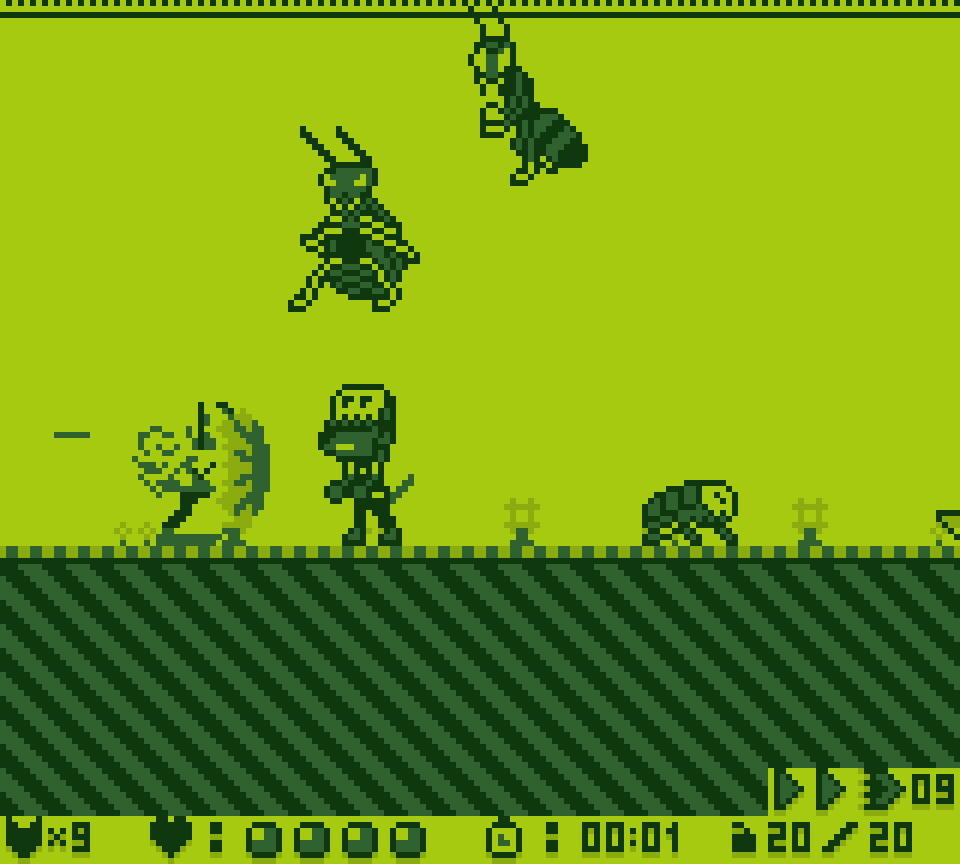 Due to the game’s screen crunch, it will be unfair if the player gets damaged by an unforeseen enemy while moving so fast above the regular speed cap so to improve on this issue, the player will have the ability to damage enemies by rushing into them whenever their speed is boosted by springs, boost pads or the new power-up: Boosted Speed. 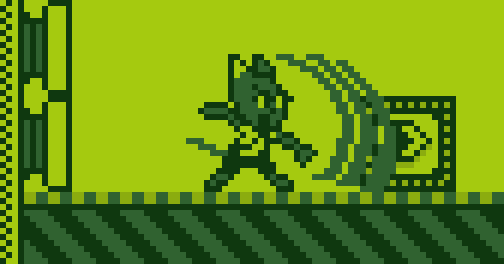 By destroying a “Boosted Speed” Box, the player’s acceleration and speed cap will be increased for a few seconds and there’s also a HUD indicator next to the timer that shows if Lizzy is running fast enough to be able to rush through enemies.
I reckon this indicator is only needed with the power-up because the player has to build up momentum while springs and boost pads instantly boosts the player.

Even if the player doesn’t have the HUD indicator from the power-up, there still should be a visual effect that appears in front of Lizzy to indicate she’s able to eliminate enemies with high speed whenever she’s moving fast from springs or boost pads.

Race from start to finish.

Well this should be no surprise if you’ve seen the new menu designs I shared two months ago. It’s kind of expected for a game like this.
This mode is pretty straight forward. Time Attack Mode simply changes the focus of beating the entire game at any pace to beating a level with the fastest time possible.

There’s no points for killing enemies, checkpoints and objective objects have been removed and there’s no bosses to encounter.
All you have to do is go straight to the end of the level.
Lives are always infinite and you can restart anytime but cheats will be automatically disabled because this mode is supposed to challenge you at trying for the fastest time.

I got nothing else to say other than implementing Time Attack Mode made me learn how to code my game to play slightly different with the change of modes. I also find this mode kind of fun to figure out what is the best route and how to perfect it for the best time. 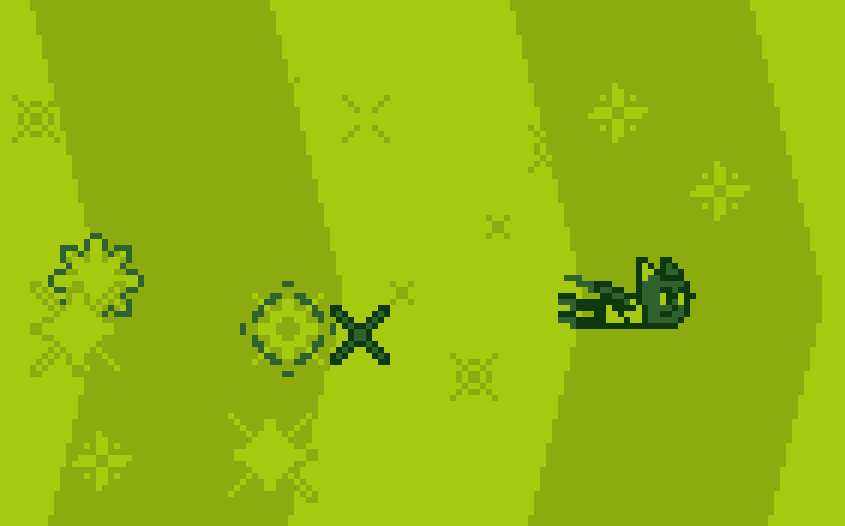 2020 has been the most productive year of ChronoVenture so far with so much progress being made and also the first year it was revealed to the public with a finished demo.
I’ve been developing my game in silence since October of 2018 but I couldn’t get too much done for over a year because school was in the way, tiring me out.

It wasn’t until the end of 2019 when I finally graduated from school as a fully grown adult and got more free time, though I did attempt to move away to learn at a university but then the virus happened (along with some other personal reasons) that made me withdraw so I essentially had a gap year that I used to work on my game for pretty much full-time.

Because of that, I was able to finish my demo in time for last year’s Sonic Amateur Games Expo in September which was the best place I could showcase my game.
It’s been viewed at least over 1,350 times and downloaded over 500 times so far but I didn’t get much feedback as I hoped. The comments I’ve seen for my demo were mostly positive but I’m aware most people have been rather apathetic about it or at least I think so anyway. I’m kind of sad but I can see why; monochromatic Gameboy graphics, unestablished protagonist, unexplained setting and possibly the inappropriate usage of “Chrono” in the title.
Right now, I’m focusing on expanding the gameplay and keeping the authenticity for the upcoming demo. I’m still brainstorming on the game’s lore and I have yet to sketch the design of the protagonist but I could address the game’s title in the meantime.

I do actually wonder to this day if “ChronoVenture” is even a good name. I picked it because it’s unique enough to be easily looked up in a search engine which is very important for visibility.
I think the game’s project name “Timewarp” sounds more accurate, since the game involves time warping or time skipping than something like adventuring several drastic time periods around the world, but I doubt the name is good for search engines.
Besides, the name is already used for some games. Not as a singular word but still.
“ChronoVenture” sounds close enough but again, I’m unsure if the name is good or not.
I might actually edit or change the name some time this year.
I had thoughts of subtitling it with “Timewarped” or renaming the title to “ChronoWarp”.

Regardless, I am encouraging myself to do better with my game.
To make it more impressive than the last demo.
Whatever the case, I’m proud of myself to finally get my game out there on the Internet publicly instead of staying on my hard drive and cloud backups. It was my goal for last year and I achieved it. Now I hope I can finish the next demo later this year.

Speaking of the next demo, I made quite a significant amount of progress since the last demo that was released in September 2020. In the span of just a few months, I managed to add new enemies, power-ups, weapons, gimmicks, features and some other improvements such as the menu redesigns. In fact, I’m starting to run out of low-hanging fruit to pick as the next few things I have to add are going to take more time and effort than usual I imagine. I’m talking about level designs, music, cutscenes, boss battles and possibly the option to change colour palettes too.
I’m close to finishing a demo than the beginning of last year actually, though I don’t think I’ll have the same pacing of work since I’ll be studying again soon in February so until then, this month might be the last time I can focus on my game full-time.

Thank you for reading the first development log of ChronoVenture of 2021.
Here’s to this new year! Seriously, I wish everyone a much better year! See you around!